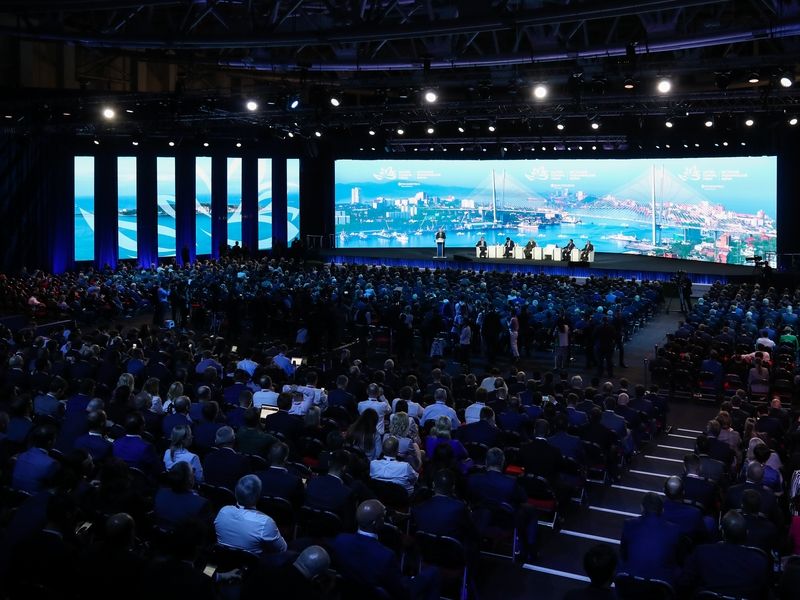 “Several thousand guests from Asia-Pacific countries, as well as representatives from large international companies will come to Vladivostok. There will be representatives from more than 60 countries taking part in the forum. Russian President Vladimir Putin is expected to attend, as well as heads of other states,” the Deputy Prime Minister said at a meeting with students, who were taking part in all-Russian competition “Your Move” and “Great Change” in Primorye on Monday, August 23.

When talking to the young participants, he reminded that the purpose of the EEF is to improve economic development and let domestic and foreign investors know how business in the Far East is supported.

“We will be submitting several new proposals to the President for further Far East development consideration,” the press service of Primorye government quotes Yuri Trutnev.

The key topic of the EEF-2021 will be New Opportunities for the Far East in a Changed World. The business program is divided into four thematic pillars: ‘The New Economy: What Changes and What Stays the Same’, ‘The Far East: New Challenges and Opportunities’, ‘Our Shared Responsibility in a Changing World’, and ‘Youth EEF’.

The program features more than 70 business events, including panel sessions, round tables, business dialogues, and international conferences. In addition, the EEF 2021 will include the following business dialogues: Russia–ASEAN, Russia–Korea, Russia–Japan, Russia–China, Russia–India, Russia–Europe, and the Greater Eurasian Partnership as an effective integration mechanism. Other planned discussions include the APEC International Conference on Higher Education, and the International Conference dedicated to the Centenary of Diplomatic Relations between Russia and Mongolia.

The key event of the EEF will be the plenary session scheduled for 3 September.

The forum will be held in both online and offline format, with participation of high profile guests. All forum events will be broadcast on the EEF website. This year, special studios of the forum will function abroad: they will operate in interactive mode of teleconferences in Seoul, Shanghai and Tokyo.

Commenting on the upcoming forum, Shankaran Nambiar, Head of Research, Malaysian Institute of Economic Research in Kuala Lumpur, noted the importance of the EEF in the context of the economic downturn caused by the pandemic.

“This year may not be a particularly vibrant year for the forum. But I think productive issues will be discussed, especially relating to the pandemic and ways to overcome it. A particularly important issue would relate to how economic recovery can be managed under these difficult circumstances,” the expert said.

From his point of view, another topical issue at the EEF will be doing business in countries that are struggling to overcome the pandemic.

“Russia has contributed tremendously to the management of the pandemic, particularly by the creation of a vaccination – Sputnik V, and I am sure the forum will pay special attention to reviving the economies of Eastern businesses,” Shankaran Nambiar stressed.

According to Nobuhide Hatasa, Professor, Osaka University of Economics and Law, the EEF is one of the most important opportunities to demonstrate the presence of Russia in the Asia-Pacific region.

“Eastern Economic Forum is now becoming one of the significant events that demonstrates Russia’s initiative in facilitating economic cooperation in the Asia-Pacific region and its commitment to forming a close relationship with each country of East Asia,” he said.

In his opinion, many businessmen in Japan, China, and Korea pay attention to the Northern Sea route where a year-round navigation may soon become feasible.

“In addition to accessibility and cost efficiency, Suez Canal Blockage happened in March 2021 was another decisive reason that most logistics companies willing to avoid traffic disturbance and reduce risks of global supply chains started seriously and realistically looking at the Northern Sea route,” the expert explained.

“This is an important event especially this year given the challenges and uncertainties facing both the global and East-European economies,” he said.

From his point of view, trade disruption and supply chain problems are key factors facing businesses.

Meanwhile, Hironori Fushita, Research Fellow at Japan Institute of International Affairs, noted that the Eastern Economic Forum is traditionally a good chance for Japan to strengthen relations with Russia.

“Moreover, the EEF, which brings together the leaders of Asian states, provides the participating countries with new opportunities for multilateral dialogue and cooperation. In this respect, the forum occupies a unique position in the APR,” he said.

According to him, the coronavirus pandemic has deprived Tokyo and Moscow of direct dialogue, and the EEF could contribute to its resumption, but Japan, according to the expert, will not be able to fully realize this opportunity.

“The rapidly deteriorating COVID-19 situation in Japan after the Tokyo Olympics and the imminent collapse of the medical system in the capital and other cities in the country will likely make it much harder for Prime Minister Yoshihide Suga to visit Vladivostok. In addition, elections for the leader of the ruling LDP party and elections for the lower house of parliament are coming in autumn – Yoshihide Suga, who does not always have a solid political base, seems to have few opportunities for foreign travel,” said Hironori Fushita, also recalling the visit of the Prime Minister of the Russian Federation Mikhail Mishustin to Iturup, which caused a negative reaction in Japan.

“If Yoshihide Suga does not participate in the EEF, although it is possible that he will participate online, then Japan’s presence at the forum will be significantly reduced. So far, economic cooperation between Japan and Russia has been driven by political motives, and, unfortunately, a decrease in the involvement of leaders can directly lead to a decline in economic relations between the countries,” he said.

In his opinion, it is difficult to deny that Japan and the Russian Federation have a lot of areas for the development of cooperation.

“For example, this is the fight against the pandemic, countering climate change, environmental protection, digitalization of the economy and others. The EEF should provide a good opportunity to discuss economic interactions in the aftermath of the pandemic. However, I doubt that now Japan, exhausted by the protracted pandemic, feels the need and has the potential for this,” Hironori Fushita explained.

“Previous data show that the numbers of media and business participants as well as of investment agreements remarkably increased from 2017 to 2019. The total value of the signed agreements cumulated in those three years amounted to approximately 9 trillion rubles, or approximately 123 billion US dollars,” he reminded.

According to him, despite the surge of new variants of COVID-19, the EEF will face both challenge and opportunity.

“The RFE remains potential for countries in the Asia Pacific, particularly in natural resources. Northeast Asian countries and the United States accounted for around 80% of its export and more than 60% of its import. Russia’s trade with these countries remains optimistic. In Southeast Asia, since 1996 Russia’s trade and investment with ASEAN have been seen a steady increase; however, they have remained small compared to other ASEAN dialogues partners. Hence, Russia should fasten its RFE revitalization to diversify its trading products and build more economic linkages with the Asia Pacific,” the expert concluded.