Facebook’s civil war: How Mark Zuckerberg ‘cut off Instagram when it started eclipsing Facebook’ while standing off against WhatsApp which hates its new owner so much staff insist on using different BATHROOMS’ 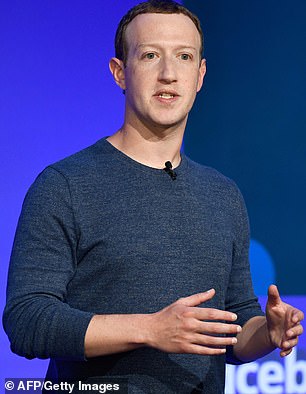 Mark Zuckerberg bough Instagram and WhatsApp for billions of dollars then, as Instagram threatened Facebook, suffocated its resources, forcing its founders out, it has been claimed

Over the last year, a civil war between Facebook, Instagram and WhatsApp has divided each company’s founders and ended with Mark Zuckerberg knee-capping his subordinates to reign supreme without challenge over all three, it has been claimed.

In a lengthy expose by Wired that was published on Tuesday, anonymous employees lay bare how Instagram’s success at a time when Facebook was bleeding users drove Zuckerberg to cut off the former’s resources in order to save his original product and drive Instagram’s founders out of his tech empire.

He was angry, it was claimed, that Instagram was growing at such a rate when Facebook was losing users and felt that it was ‘cannibalizing’ it.

He also had issues with the positive press its founders were receiving when he and Sheryl Sandberg, Facebook’s COO, drowned in scandal after scandal.

The news that cut off the companies will likely fuel demands for Zuckerberg to break up his empire and drive further criticism of his ability to stamp out any competition he comes across by simply buying it then destroying it.

In 2014, Zuckerberg told staff that no other executives were allowed to sit for magazine profiles without his or Sandberg’s permission because, it is claimed, Instagram founder Kevin Systrom had just done one.

Three years later, as Facebook battled privacy scandals and Instagram grew in popularity, a meeting was held where Facebook data analysts presented all the ways that people were sharing less inside the ‘blue App’, as it is called on its Menlo Park campus, as a direct result of Instagram.

‘To some people, this sounded like they were simply presenting a problem to solve.

‘Others were stunned and took it as a sign that management at Facebook cared more about the product they had birthed than one they had adopted,’ the article, compiled after 65 employee interviews, reads.

By the time the Cambridge Analytica privacy scandal hit in 2018 – when tens of millions of users discovered that Facebook had allowed a data harvesting company to gain access to their information without their knowledge – Systrom and his co-founder Mike Krieger had become frustrated with the way Zuckerberg was demanding changes they did not agree with. 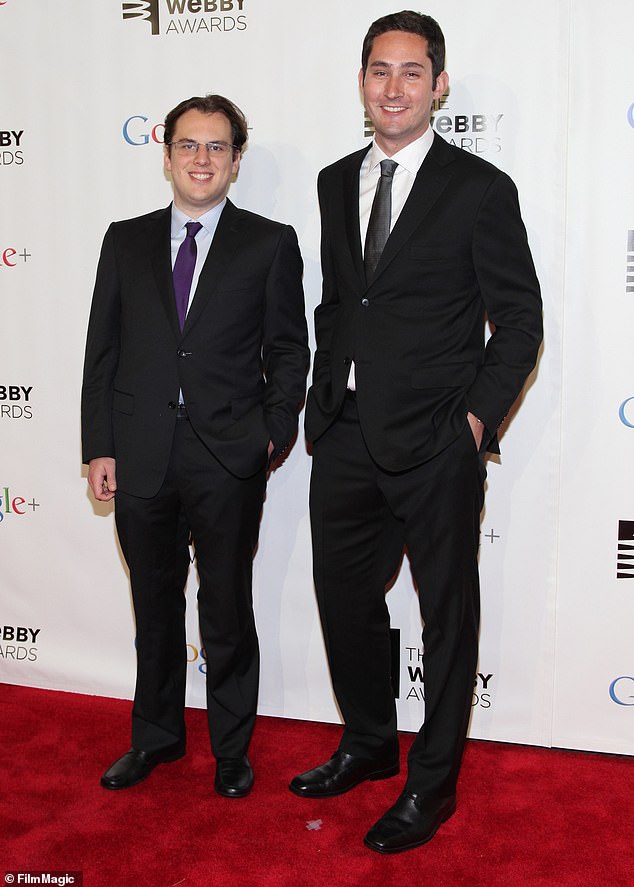 According to Facebook and Instagram employee who were interviewed, Zuckerberg was angry at Instagram’s progress compared to Facebook’s slow growth. He cut off its resources which enraged Instagram founders Mike Krieger (left) and Kevin Systrom (right). Both left in September 2018

They anticipated that he was ‘souring’ on him and had requested that Adam Mosseri be brought in to their team because they trusted him most out of Zuckerberg’s inner circle.

By July last year, Zuckerberg had become ready to turn off Instagram’s ventilator, it is claimed.

Once had the list, he reportedly sent it to Systrom and Krieger and told them that he would be ending them all.

Systrom promptly relayed the message in a memo to Instagram’s staff which ‘enraged’ Facebook and made bosses fear it would be leaked.

One former senior manager said it was like a ‘flame going up in the company’.

Two months later, specific features which Systrom and Krieger had fought against, started appearing on Instagram, namely a location tracking feature and a ‘hamburger’ menu button which is the commonly-seen logo of three, horizontal lines to direct users back to a home page.

‘It felt very personal,’ a senior Insta­gram employee who had to make the changes said.

Systrom told friends that he felt Zuckerberg was treating him the way Donald Trump was treating Jeff Sessions at the time, it is claimed, by ‘making life miserable in hopes that he’d quit without having to be fired.’

They also said that Facebook had crippled their budget.

Systrom went on paternity leave then never returned. Krieger decided to leave too.

They were replaced by Mosseri who would report to Chris Cox, a Zuckerberg loyalist who was by this point in charge of Facebook, Instagram and WhatsApp. 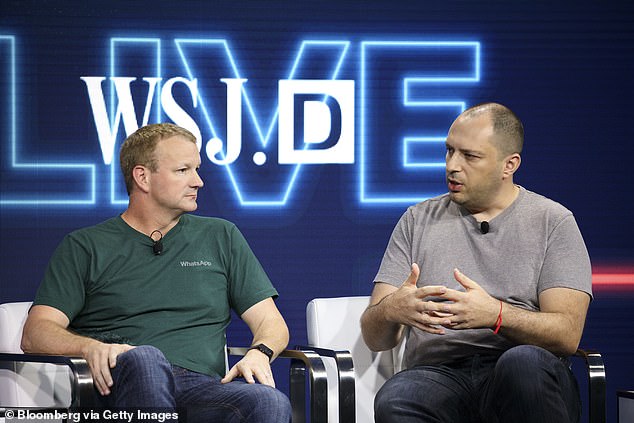 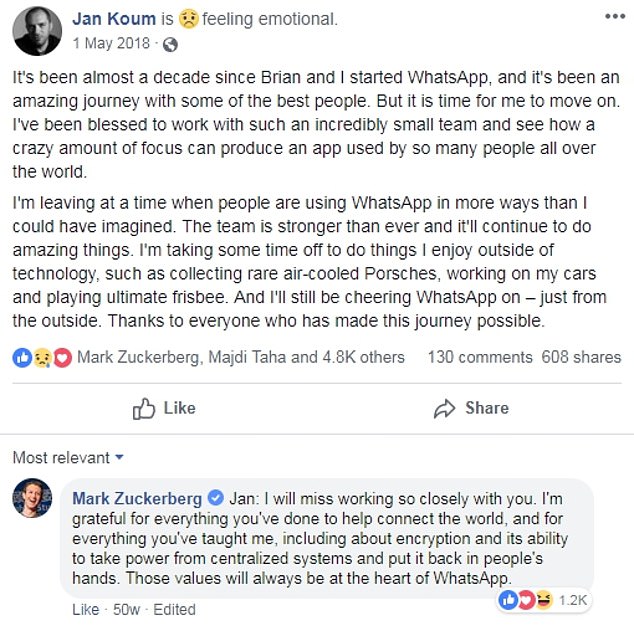 Koum quit a year after Acton and was diplomatic in his departure. Zuckerberg, who had clashed with him repeatedly, gave him a glowing public referral

‘MY EYES WERE ROLLING BACK IN MY HEAD’: FACEBOOK’S #METOO TOWN-HALL AFTER BRETT KAVANAUGH HEARING

Facebook held a town hall meeting attended almost exclusively by women after executive Joel Kaplan was photographed supporting Brett Kavanaugh at a hearing over his appointment to the Supreme Court and sexual misconduct allegations.

The meeting made headlines when it happened last year but new details from it have emerged. 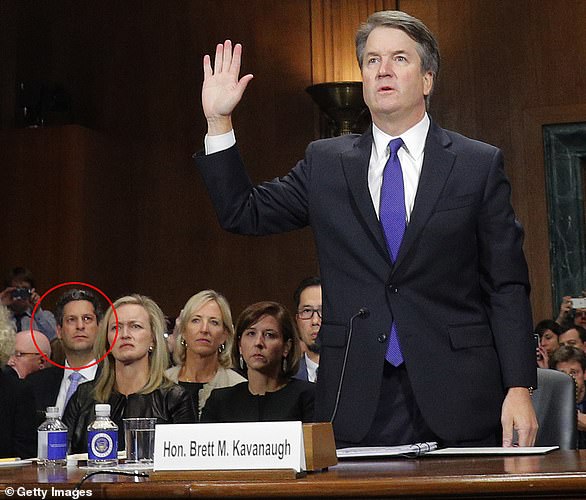 Facebook employees were aghast when a photograph emerged of Joel Kaplan, circled, a senior executive, sitting in support of Brett Kavanaugh, at his SCOTUS hearing

According to staff who attended, the only men present were Mark Zuckerberg and Kaplan who appeared via a video link and looked ‘like a man who had just shot his dog’.

The audience was divided into three, non-descript sections.

One by one, women told of their own sexual harassment problems or experiences, according to one person who was there.

‘My eyes rolled to the back of my head,’ one person said.

After the meeting and the hearings, Facebook held smaller, 10-person sit downs where staff could speak to managers about their concerns.

‘It was a really bizarre confluence of a lot of issues that were popped in the zit that was the SCOTUS hearing,’ said one person.

Kaplan, unperturbed by the fallout at his workplace, held a party for Kavanaugh days later to celebrate him being appointed.

WhatsApp, which Facebook bought for $19billion in 2014, was having its own problems with its new owners.

Brian Acton and Jan Koum, the app’s founders, were frustrated with Facebook’s plans to install ads in the messaging service and, according to the report, were so at odds with their new owners they insisted on having WhatsApp only conference rooms and bathrooms where the stall doors were full length instead of the shorter ones used by Facebook employees.

Acton quit in 2017 over clashes about ads.

‘At the end of the day, I sold my company.

‘I sold my users’ privacy to a larger benefit. I made a choice and a compromise. I live with that every day,’ he said a year later during an interview with Forbes.

He gave no real explanation for his departure in his announcement about it on Facebook, but Zuckerberg said in his own post: ‘Jan: I will miss working so closely with you.

‘Those values will always be at the heart of WhatsApp.’

Cox departed Facebook in March this year after the company, having been beaten repeatedly in the press and in public opinion, decided to change its privacy policies and prioritize protecting its users.

Zuckerberg has touted the new day plan in multiple interviews and has apologized for putting users’ data at risk.

Now, the company says it has implemented whole new departments dedicated to getting it right and not betraying users.

Facebook did not immediately respond to DailyMail.com’s inquiries about the new claims regarding the tensions between Instagram and WhatsApp when contacted on Tuesday.

The new claims came on Tuesday as leaked documents obtained by NBC revealed years of deliberations between how Facebook handles data.

Some 4,000 pages of highly sensitive Facebook internal documents, largely spanning 2011 to 2015, were leaked to a British journalist who shared them with several outlets, according to NBC News.

The documents, which include emails, webchats, presentations, spreadsheets and meeting summaries, appear to show Facebook’s internal deliberations on whether to sell user data to third party app developers.

It appears the Facebook ultimately decided against selling user data, instead opting to dole it out to app developers who were considered personal ‘friends’ of CEO Mark Zuckerberg or those who spend money on Facebook ads or shared their own valuable data.

While one employee fretted that the company’s approach to user data was ‘unethical’, Doug Purdy, Facebook’s director of product, described Zuckerberg as a ‘master of leverage,’ according to the documents.

Facebook denied that it gave any preferential treatment based on advertising spending or personal relationships with executives.

The company did not immediately respond to a message from DailyMail.com. Facebook has not been accused of criminal wrongdoing.

Facebook said that the leaked documents had been ‘cherry picked’ and presented a warped view of its deliberations.

‘The set of documents, by design, tells only one side of the story and omits important context,’ the company said in a December blog post when the first documents in the leaked batch emerged.

The documents mostly describe internal deliberations leading up to a major change that Facebook made in 2014 and 2015, when it severely restricted access to user data from third party apps.