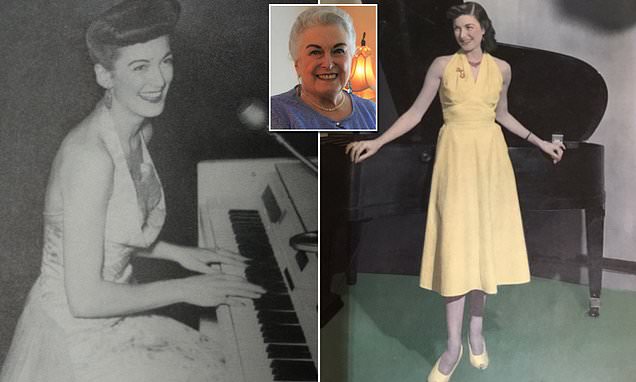 ‘The trick is not to die … ’til you do!’ Lifelong performer and veteran of world-famous clubs to headline charity gig just days before turning 90, quoting one of her own songs with the advice: ‘You’re never too old!’

The lilting voice of the singer – and her effortless elegance – waft through the Friday night crowd at an upscale California steak house, not a hair out of place above her flawless makeup as she performs Beatles hits and other classics to the delight of an adoring crowd. Ruth Allen takes the floor only once every three weeks here at Larsen’s, but she’s been building up quite a loyal following in the bedroom community of Valencia, Santa Clarita, winning fans and followers with her graceful, charismatic and pitch-perfect delivery.

She looks like she’s been doing it all her life; in reality, she has – and quite a long life it has been. Because Ruth, who has lived across the US and UK, is turning 90 years old next month – and she’s about to top the bill at a charity show in her adopted suburban LA hometown.

She’s already graced some of the most famous stages and clubs in the world, from the Astor Club and the Savoy in London to the Mars Club in Paris – along with more rugged but no less impressive USO tours through the years. But now, at youthful 90, she’ll be headlining near the enviable environs of Tinseltown itself.

‘Music has everything to do with it,’ Ruth says of her remarkably age-defying countenance and energy. ‘Music is the greatest therapy in the world.’

She adds: ‘I’m not one of these people that does exercising; I’m lazy as all get-out when it comes to that. But I still haven’t put on weight or anything; I’m still fairly good-looking when I put on an evening dress or something … I can still pass for 65 or 70.’ 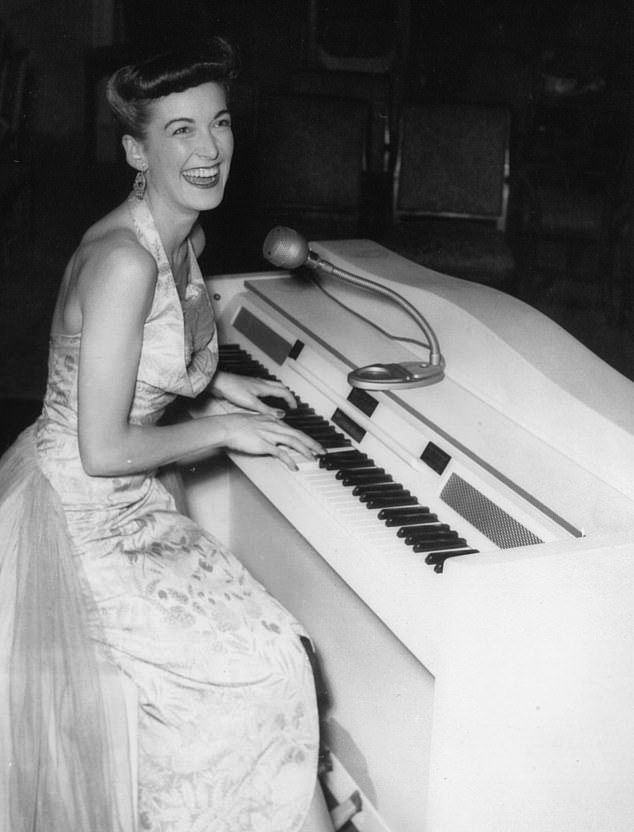 Ruth Allen discovered her ear for music as a child growing up poor in London – and she began performing in public as a teenager, entertaining crowds looking for an escape during the fearful days of World War II 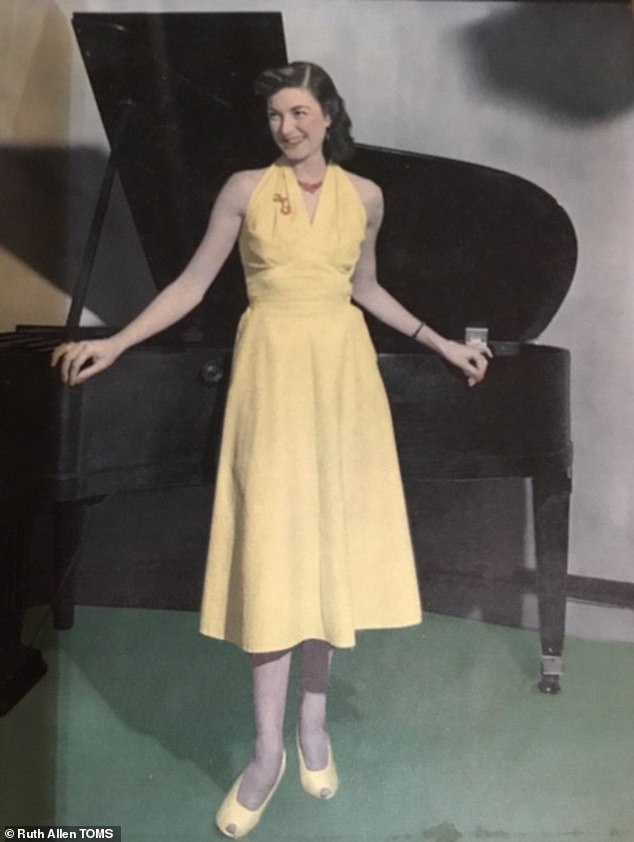 Allen got her ‘big break’ at London’s Astor Club when she was a newly separated mother-of-two and went on to perform in world-famous venues such as London’s Savoy and the Mars Club in Paris, France 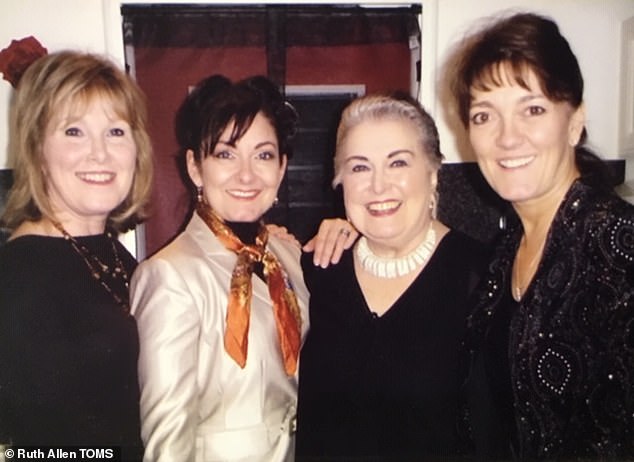 Ruth, pictured with her three daughters, says that music has played a role throughout her life and has kept her young; in addition to just singing and playing the piano, she wrote lyrics to music composed by her brother and even completed a musical and a memoir

British-born Ruth – who spent years performing under the stage name Ronnie Graham – has lived an incredible life on both sides of the ocean, traveling the world, raising a family and overcoming everything from war to loss in her 89 years. She’s not content to just sing once a month at Larsen’s; no, she’s also a beloved fixture each week at an assisted living facility around the corner from her home, brightening up the afternoons of many contemporaries even older than her.

Music, she says, ‘lifts your spirit – and these people that I sing to, they had long forgotten the songs, but as soon as I give them to them, they realize they know all the words.’

She adds: ‘We really have a ball. I come out feeling so uplifted. I’ve gone in there to make them feel good, but they make me feel good.’

Ruth grew up in a poor but musical family in Fulham, London; extended relatives would gather each weekend around her grandmother’s piano, and Ruth realized at an early age that she had a keen ear for music. She began performing in London during World War II after turning up to an audition with a friend – (‘I should mention that the war was, of course, going like mad at that time,’ she says offhandedly) = but it wasn’t until after a short-lived marriage at 19 – and the birth of two children – that Ruth got her ‘big break’.

She went along with two musician friends to auditions at London’s newly reopened Astor Club, performing three songs to raucous applause that prompted owner Bertie Green to hire her – despite the fact that he didn’t want a piano act. Green said he’d take her on for two weeks, but after the fourth show he told her to turn up the next afternoon and took her shopping. She was told to pick out her own piano – a mahogany upright she fell in love with – and before she knew it, it was painted white and adorned with blue velvet sporting her name in sequins.

She was paid 20 pounds a week – ‘an absolute fortune,’ she tells DailyMail.com.

It was at the Astor Club that she would eventually meet her second husband – in addition to securing an invitation to France.

‘Some French people came in that owned a club in Paris and said they would like to book me for a couple of weeks or a month, and Bertie at first said, “Oh no, I’m not letting her go” – but anyway, I talked him into it, because I was a bit bored by this time with the same routine,’ she tells DailyMail.com. ‘And I went to Paris, and there, one night in my club, who should come in but Billie Holliday! 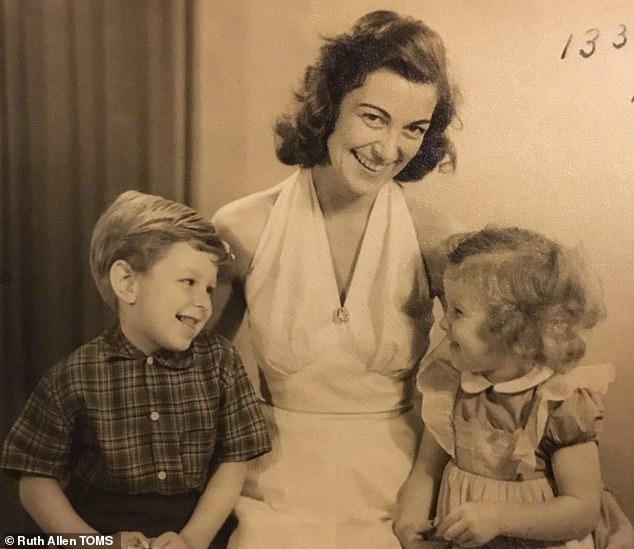 Ruth, pictured with her son Paul and daughter Gail, lived across the US as well as in London and is now based in California, where she will headline a show in celebration of her life and accomplishments on January 13 in Valencia, Santa Clarita 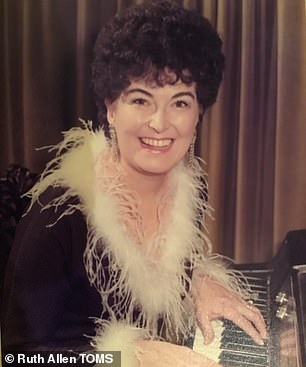 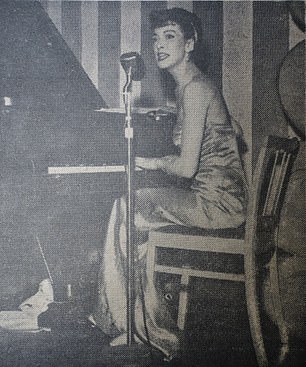 Ruth, pictured left around 1954 and right as a younger performer, quotes one of her songs to DailyMail.com, saying: ‘The trick is not to die til you do’ … adding: ‘And that is a marvelous saying’ 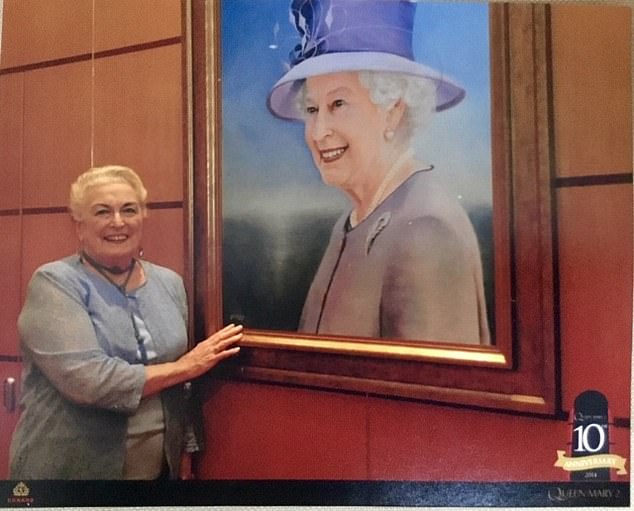 Ruth proudly poses with a portrait of Queen Elizabeth II painted by her daughter, artist Gail Graham; now almost 90, the performer says that a lifetime of giving and volunteering has also kept her young

‘And to be honest with you, at that time, I’d never even heard of her!’ she says, with a burst of her upbeat, tinkling laughter. ‘She came in and she played for us; we liked each other, and she said, “Come on out to dinner.” Four am in the morning, we went to dinner.’

She adds: ‘It was a French restaurant, of course, and I know we sat around this table, and on every different dish that we got, we had a different glass of wine. Oh, it was hectic; it really was. But she was a lot of fun.’

She returned to England, however, and went on to marry her second husband, an American GI from Detroit named Bill; with him, she moved all over the States, from Florida to Cape Cod to Utah. They eventually divorced, however, and she moved back to London.

Through it all, music was a constant; Ruth was always singing, humming, whistling or even just listening to music. She was also writing lyrics and songs; her brother is a talented pianist and would often write the music, while Ruth would pair it with words. In addition to recording two albums, she wrote her own 18-song musical, in fact – Ring Out The Bow Bells – and she’s also written a memoir. 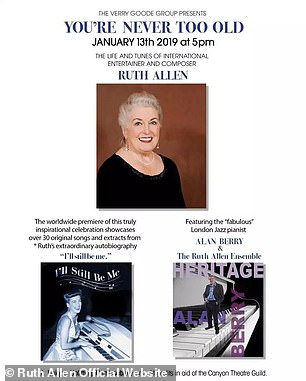 Ruth’s upcoming show takes its name from one of her original songs: You’re Never Too Old – and features performances from others, including her brother. Tickets can be purchased from Canyon Theater with prices starting at $20

One of her songs – You’re Never Too Old – is particularly apt as she nears a sprightly 90; it’s also the name of an upcoming charity show in celebration of her life and music. Ruth, who is now based in California, will be headlining the gig on January 13 at Canyon Theater in Valencia – with support from performers including her brother – with proceeds going to Newhall Community Theatre, which donates to nearly 100 different charities.

‘I never went looking for fame; really, I just enjoyed music, and I think it’s kept me young,’ a delighted Ruth tells DailyMail.com. ‘God smiled on me in so many ways, and I’m so grateful. I really am.’

She says: ‘I’m not a religious person; I don’t go to church, but I always said: My house is my church. And I do pray every night; I thank him for all he’s given me – my health and my children.’

She also has a little advice on how to stay young – and the secret is not just music.

‘Giving is as much as anything … to give of yourself in some way or another. If you’re a musician, then play … I’ve always volunteered.’

She adds: ‘In giving, you’d be surprised how much you could take.’

And Ruth’s exuberance is an inspiration in itself; it’s hard not to take heart from her energy, her enthusiasm and even her lyrics.

‘The trick is not to die … ’til you do,’ she says, quoting from You’re Never Too Old. ‘And that is a marvelous saying.’

Why Kathie Lee Gifford Decided to Leave 'Today' After 11 Years