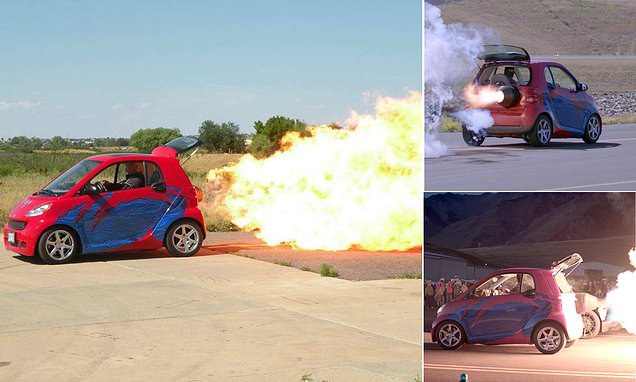 A car enthusiast has built a jet-powered Smart car, complete with a fire-breathing exhaust, that can be driven on the road and hit 220mph.

Owner Bill Berg has managed to keep the vehicle street-legal, and now he loves nothing more than travelling the world showing off his latest prized asset.

These modifications mean the Smart car can do around 160 to 170mph in about nine seconds on a race track. 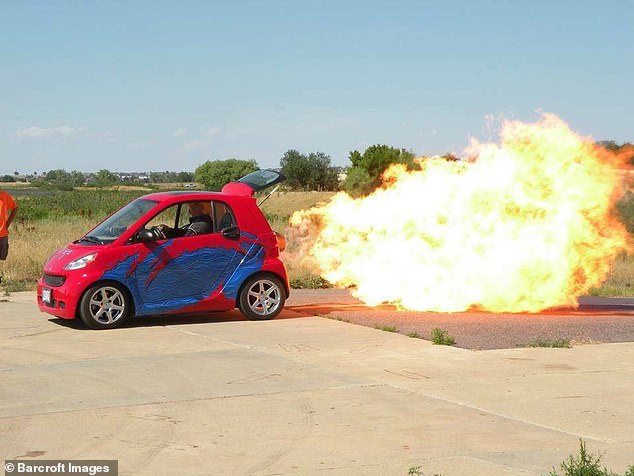 The jet-powered Smart car fires up its engine, sending flames shooting out the turbo engine 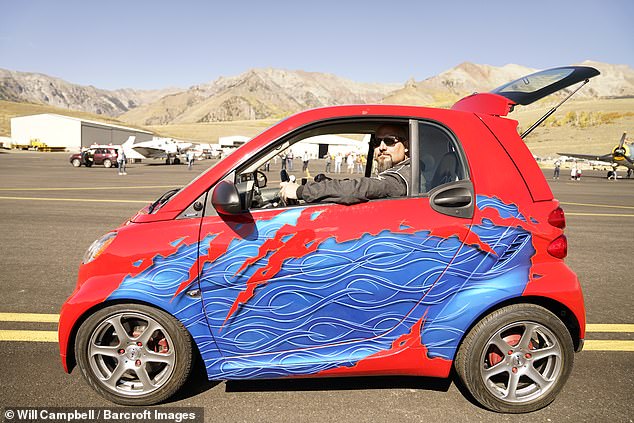 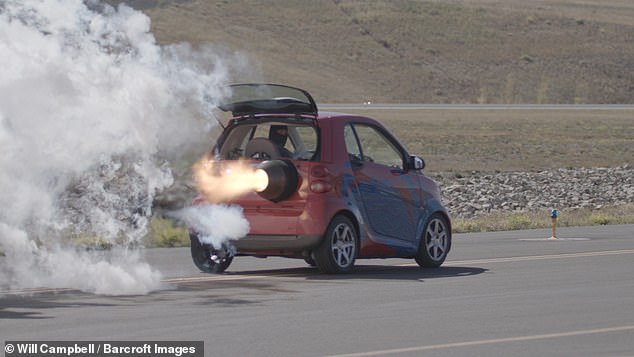 He has had a passion for cars since he was a child – especially those that have the ability to reach the highest speeds.

The 44-year-old, who lives in Colorado, said: ‘Here at Rocketbilly Racing, we love to bring jet-powered high-octane fueled entertainment to people all around the world.

‘This is the world’s fastest smart car – one of our latest insane rides.

‘You know, you can’t take life too seriously and so we find vehicles that aren’t supposed to go fast and just prove to people that with immense thrust and horsepower you can offset gravity.

‘Before, the smart car was powered by a three-cylinder 60hp engine. But that’s just not enough for Rocketbilly.

‘So with the help of Arfons, who built and designed the engine, we decided to put in a 2,000hp T-58 UV helicopter engine and we’re making a smart car that will do 160 to 170mph in about nine seconds on a race track.’ 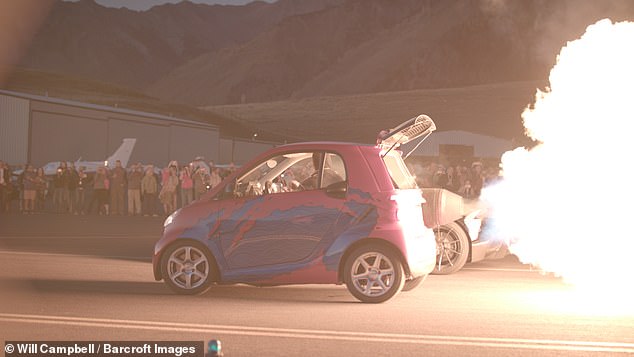 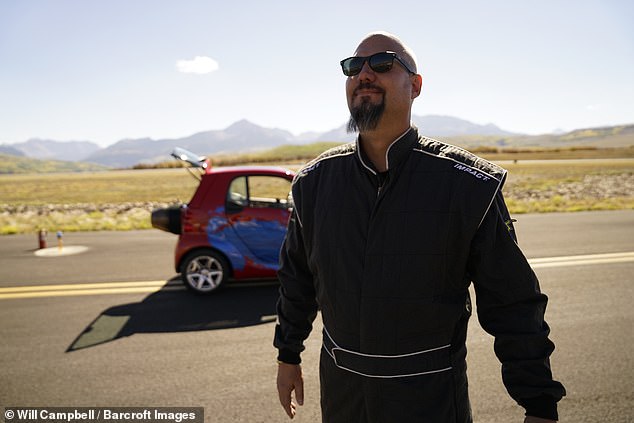 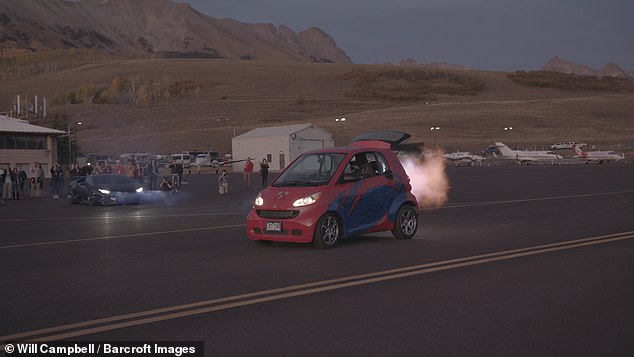 Bill said the car was ‘a handful’ as the engine doubles the amount of thrust to the wheels.

He said: ‘This is an incredibly well-built vehicle. On one side, it’s super economical. On the other side, not so much, burning around 15 gallons in five minutes.

‘They balance each other out. However, you are literally sitting next to a 2,000hp fire-breathing turbo jet that has a whole lot of movement and a whole lot of heat.

‘It’s definitely a handful. It has an afterburner that pretty much creates double the amount of thrust.

‘I owned and operated an auto shop for years where we did all sorts of car restorations. That inspired me to go on and just have fun.

‘There’s definitely a theme there. It’s really cool that we managed to get a license plate on the smart car too. It’s absolutely street legal, with the headlights etc.

‘How many 300mph race cars do you know that have functioning windshield wipers? Everything works great.’ 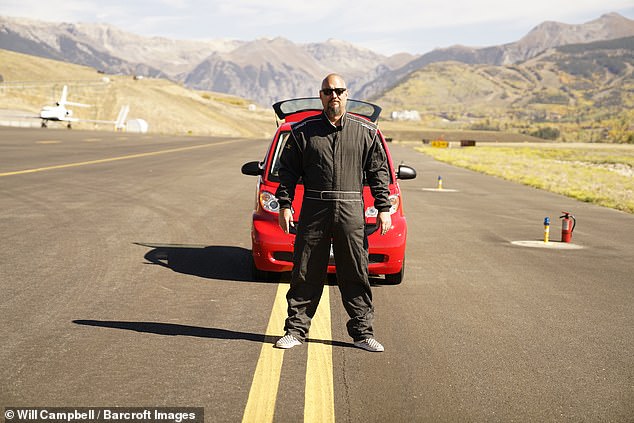 Bill Berg says the car as a ‘perfect fusion of aviation and automotive’, with the engine starting at 900F and spinning 15,000 to 30,000rpm 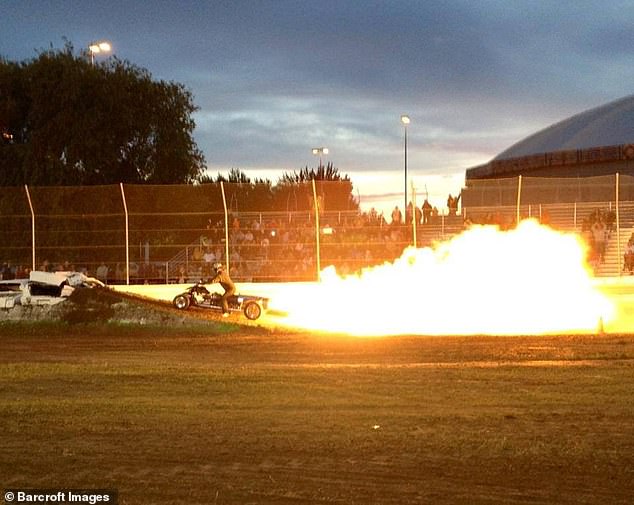 One of Bill Berg’s quad-bikes fires up on a runway. He next project will see him working on a jet-powered Rolls Royce Viper II

With the car being street legal, Bill often drives across the States to the biggest car shows, wowing both parents and their children.

‘This is the ultimate toy right here,’ he said. It’s a jet-powered smart car, I think everyone wants to play with it. It brings adults back to their childhood and that’s a cool thing to witness and be part of.

‘It has a pretty interesting following, there are some real loyal smart car fans. We make the occasional grocery stop and often get the neighbors pointing and laughing too. It’s all great fun.’

Bill has always been fortunate to have a strong support system around him who encourage all of his crazy car ventures.

And he shows no signs of slowing down, now working on his latest project – a jet-powered Rolls Royce Viper II.

Bill added: ‘The people around me dig what I do. In fact, my girlfriend is a jet driver herself.

‘I take pride that I am a builder and an engineer for my customers. So absolutely, anything is for sale. If the price is right and you’d like to buy the smart car, we can talk.

‘Actually, I take that back. It’s not for sale, because my girlfriend would probably kill me.’