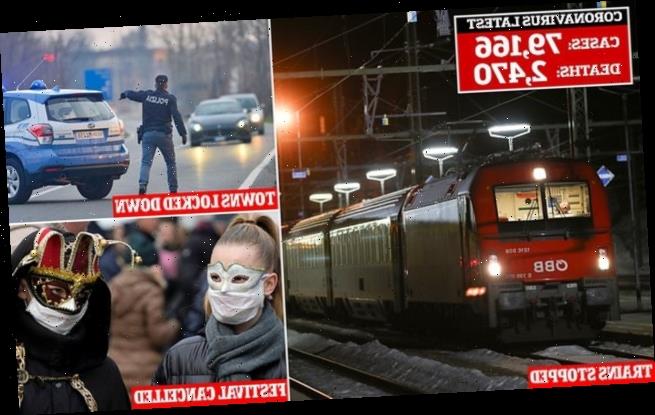 Experts have warned the world has reached a coronavirus ‘tipping point’ after an explosion of cases in the last few days, including three deaths in Italy and another four infected in Britain, sparked panic in Europe.

It comes as Austria last night briefly halted all trains moving to and from Italy which has locked down 50,000 residents in 12 of its northern towns after 150 became infected.

As Italy recorded its first death on Friday, the director general of the World Health Organisation Tedros Adhanom Ghebreyesus spoke of a narrowing ‘window of opportunity.’

Sharp rises in Italy, Iran and South Korea have brought this window into stark focus as the global infection toll soared to 79,166 today, including 2,470 deaths.

On Saturday night, four Britons evacuated from the coronavirus-stricken Diamond Princess tested positive for the illness after 32 passengers from the cruise liner held in Japan arrived for quarantine at Arrowe Park Hospital on the Wirral.

While the European Union urged there was ‘no need to panic’, health experts warned that in the last 24 hours the world has been brought to the brink.

Paul Hunter, professor in medicine at the University of East Anglia, said: ‘The director general of the WHO has recently spoken of a narrowing of the window of opportunity to control the current epidemic. The tipping point after which our ability to prevent a global pandemic ends seems a lot closer after the past 24 hours.’

He noted that despite numbers declining in China, where the outbreak began in December, the weekend’s developments were ‘extremely concerning.’ 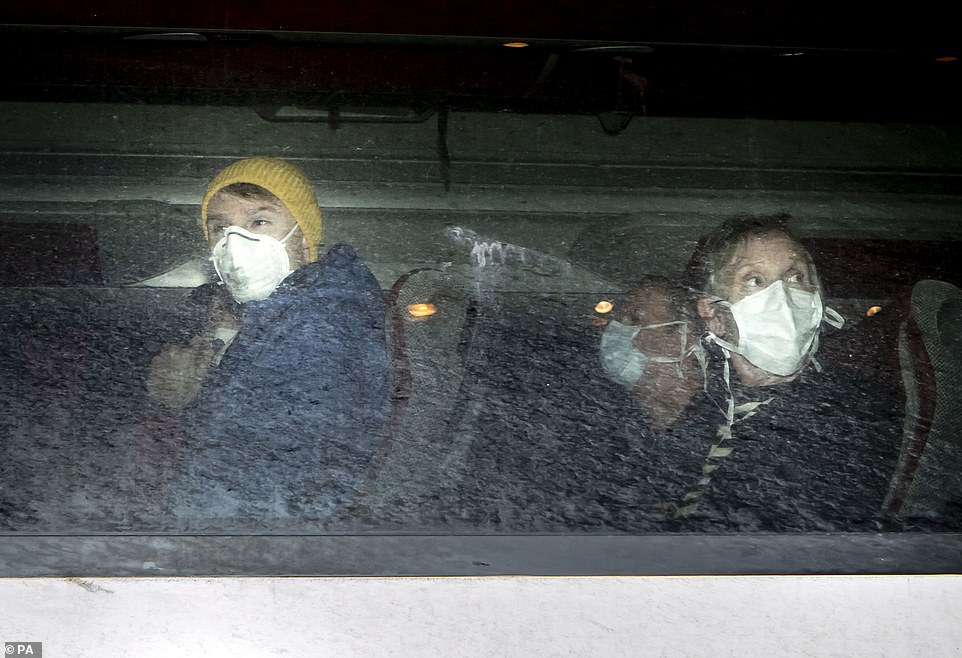 UNITED KINGDOM: 30 Britons and two Irish citizens arrived back in Britain on Saturday night (pictured) and were taken for quarantine at Arrowe Park hospital on the Wirral. Four were diagnosed with the virus and rushed to other hospitals

ITALY: A policeman wearing a sanitary masks gestures next to a reveller in Venice as authorities called off the annual carnival 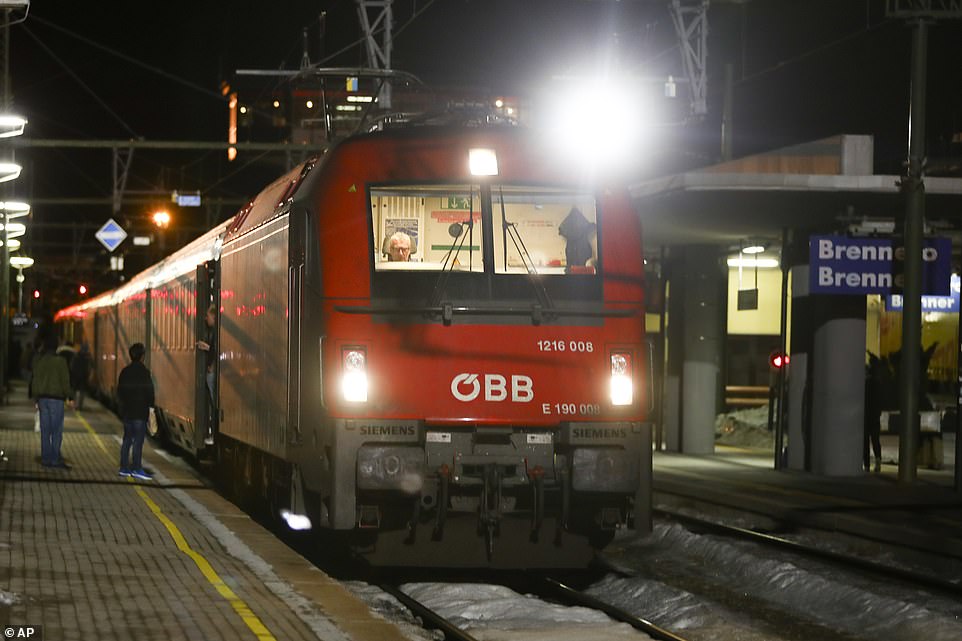 ITALY – AUSTRIA BORDER: A train stopped by authorities stands on the tracks at the train station on the Italian side of the Brenner Pass on Sunday with 300 passengers on board after two complained of flu-like symptoms. The train was later given the all clear 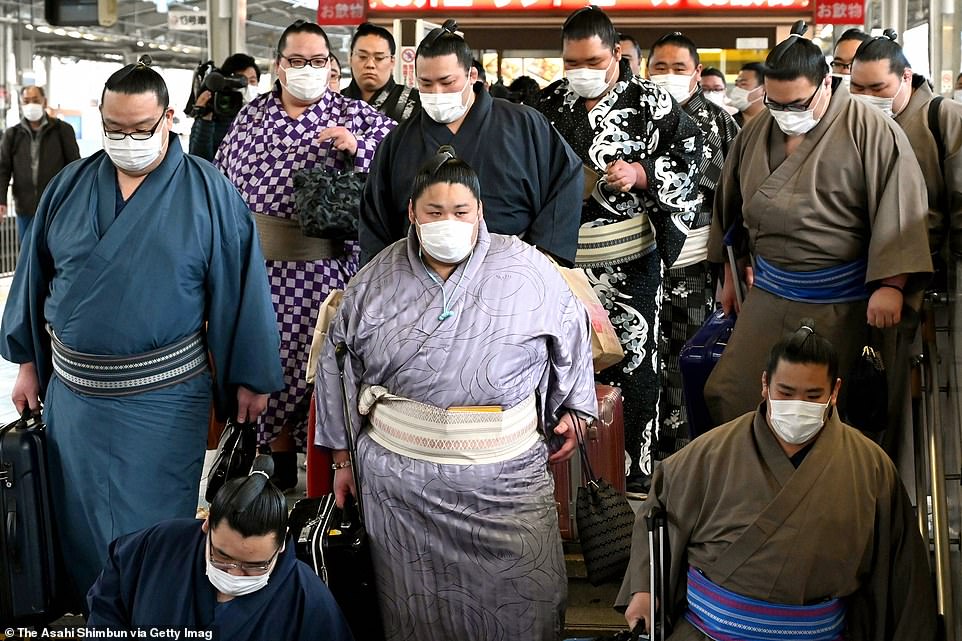 JAPAN: Sumo wrestlers wearing face masks are seen on arrival at Shin Osaka Station ahead of the Grand Sumo Spring Tournament on Sunday 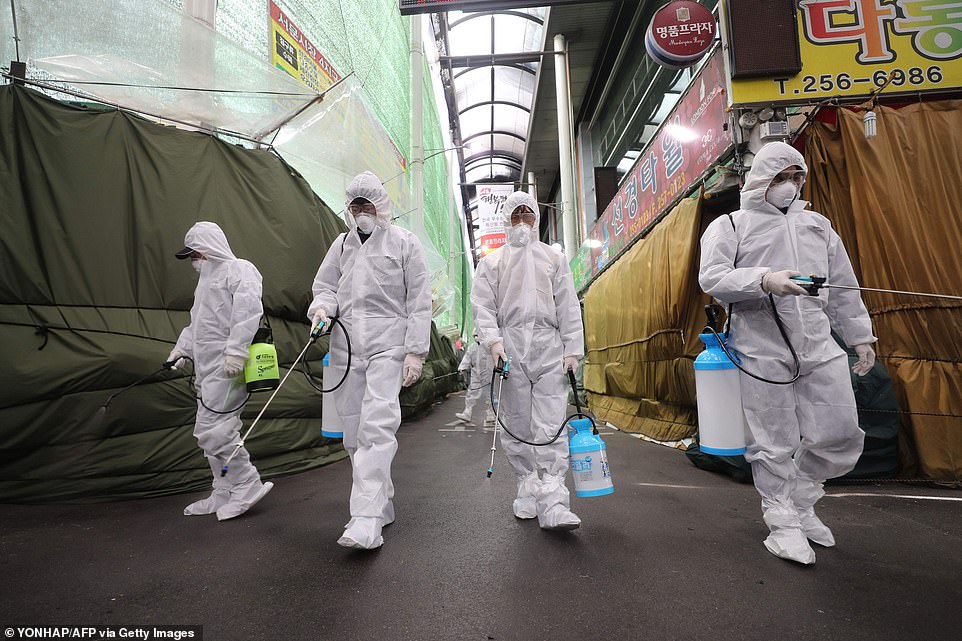 SOUTH KOREA: Workers wearing protective gear spray disinfectant at a market in the southeastern city of Daegu. South Korea reported two additional deaths from coronavirus and 123 more cases on February 23, with nearly two thirds of the new patients connected to a religious sect. The national toll of 763 cases is now the second-highest outside of China, with seven dead 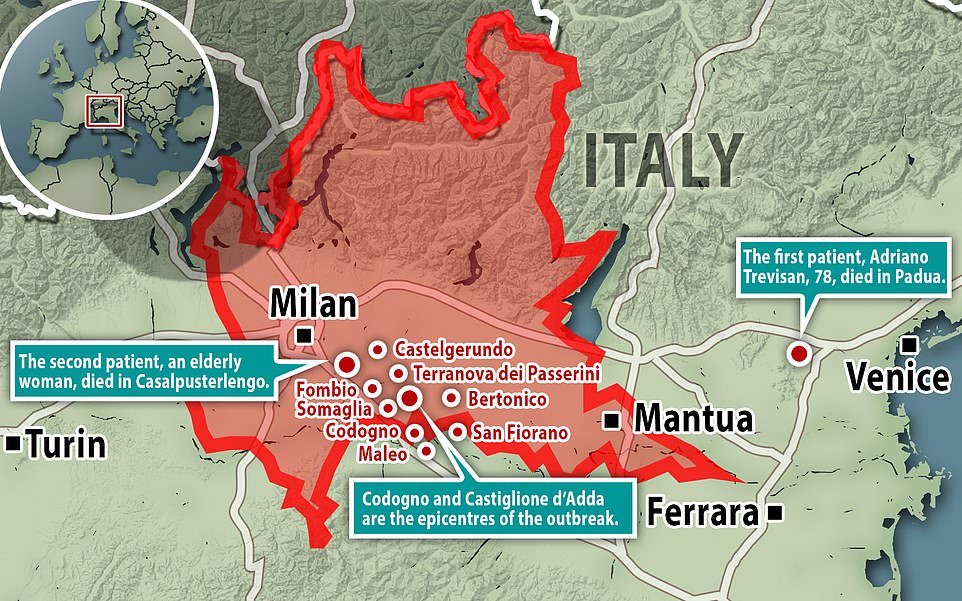 Italy placed 50,000 residents on lock down today, called off the Venice Carnival and postponed top flight football matches as it sought to contain the rampant disease.

Meanwhile Austria held up a train carrying around 300 people in the Brenner Pass amid panic over two passengers who had flu-like symptoms. The train was later given the all clear after they tested negative.

South Korea’s President Moon Jae-in placed his country on ‘red alert’, there were 161 new cases reported on Monday and another death, raising the total infected to 763 with seven dead.

Dr Robin Thompson, junior research fellow in mathematical epidemiology at the University of Oxford, told The Guardian: ‘This is an important stage of the coronavirus outbreak …  Fast isolation of even mild cases in affected areas is important for preventing substantial person-to-person transmission in Europe.

‘It is critical that public health guidelines are followed.’ 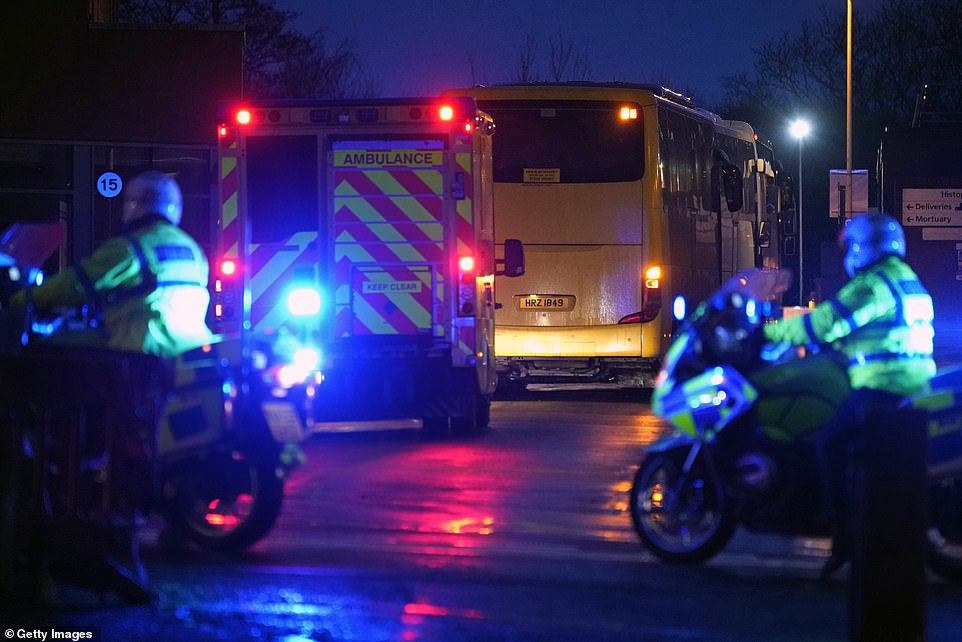 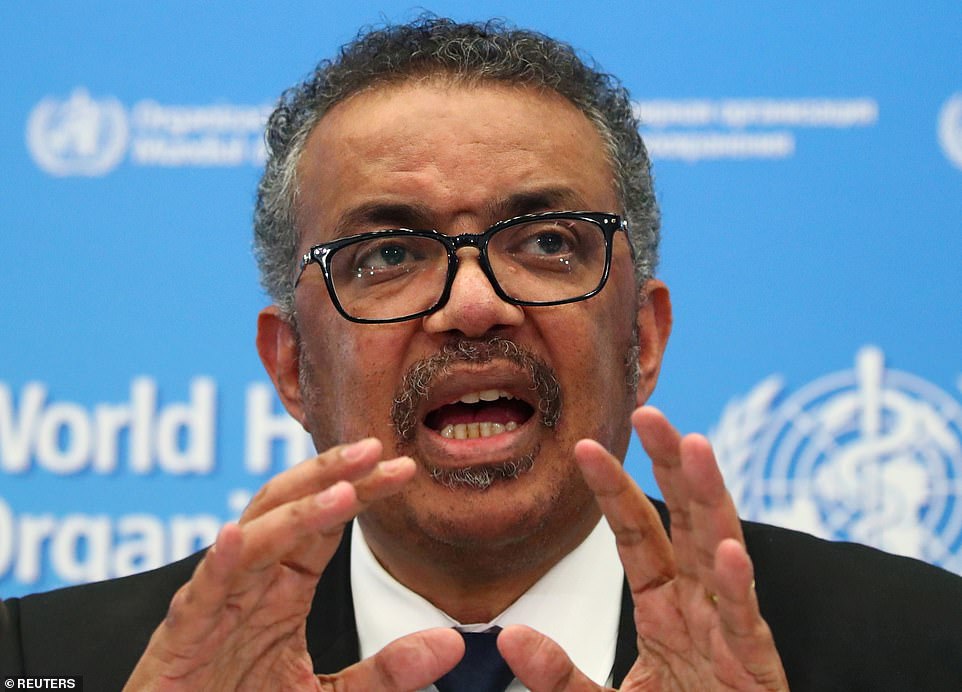 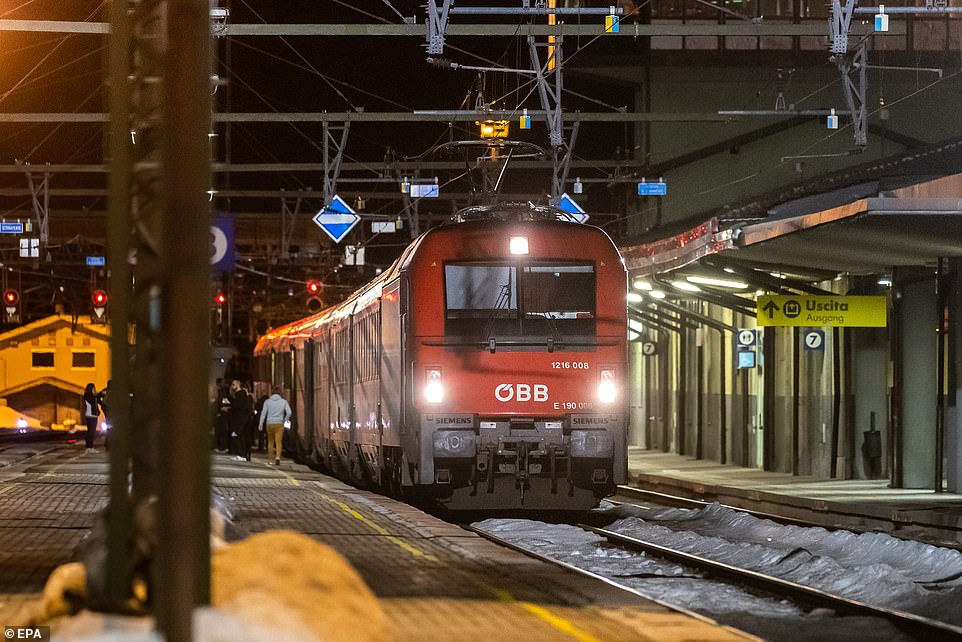 A view of the stopped train at the Brenner railway station at the border between Tyrol, Austria, and South Tyrol, Italy, seen from the Austrian side on Sunday night 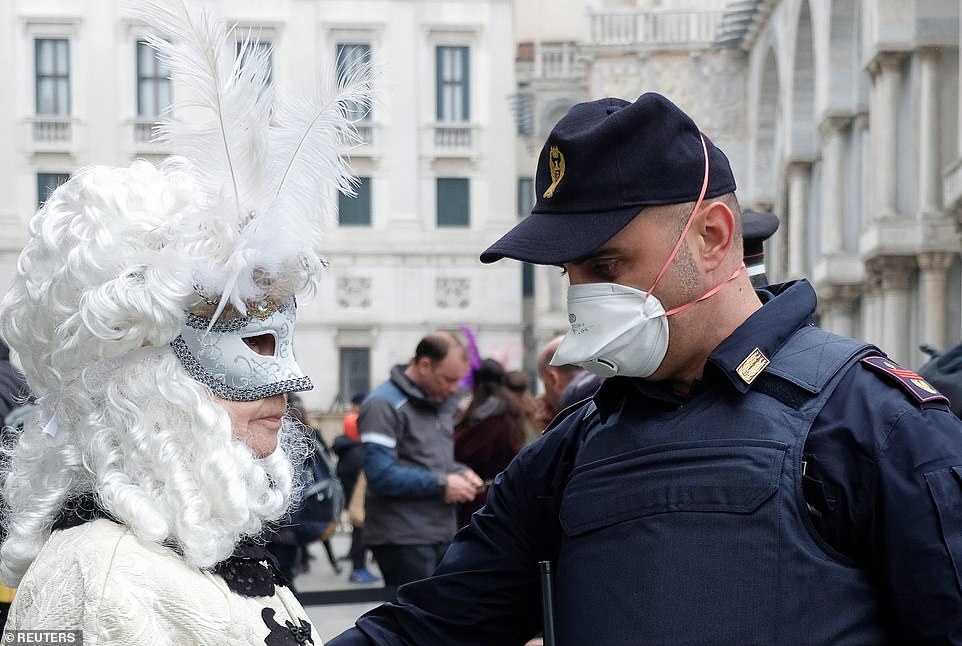 A police officer wearing a protective face mask stands next to a masked carnival reveller at Venice Carnival, with the last two days, as well as Sunday night’s festivities, cancelled because of coronavirus. As Italy recorded three deaths, the director general of the World Health Organisation Tedros Adhanom Ghebreyesus spoke of a narrowing ‘window of opportunity.’ 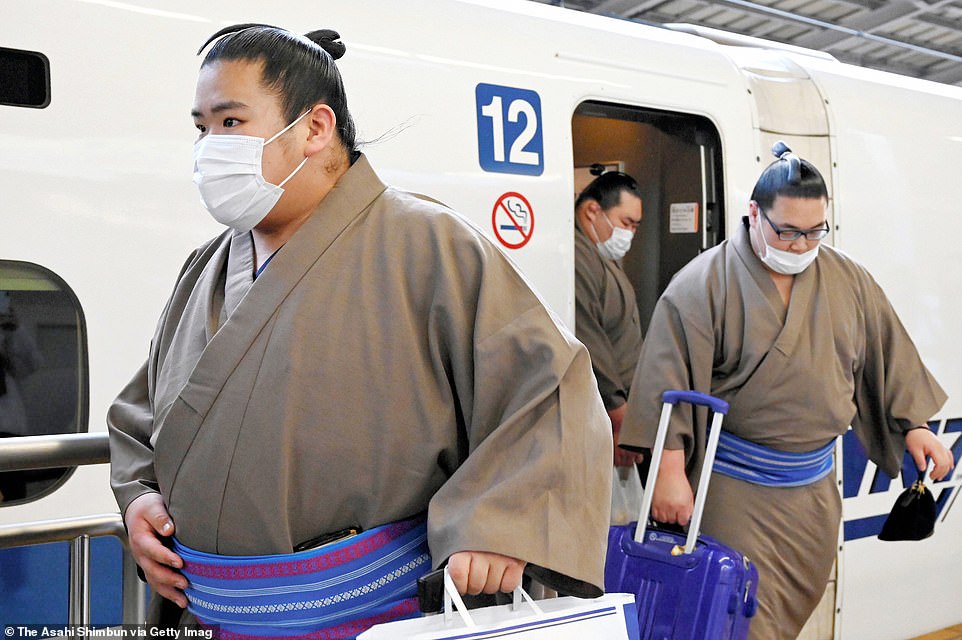 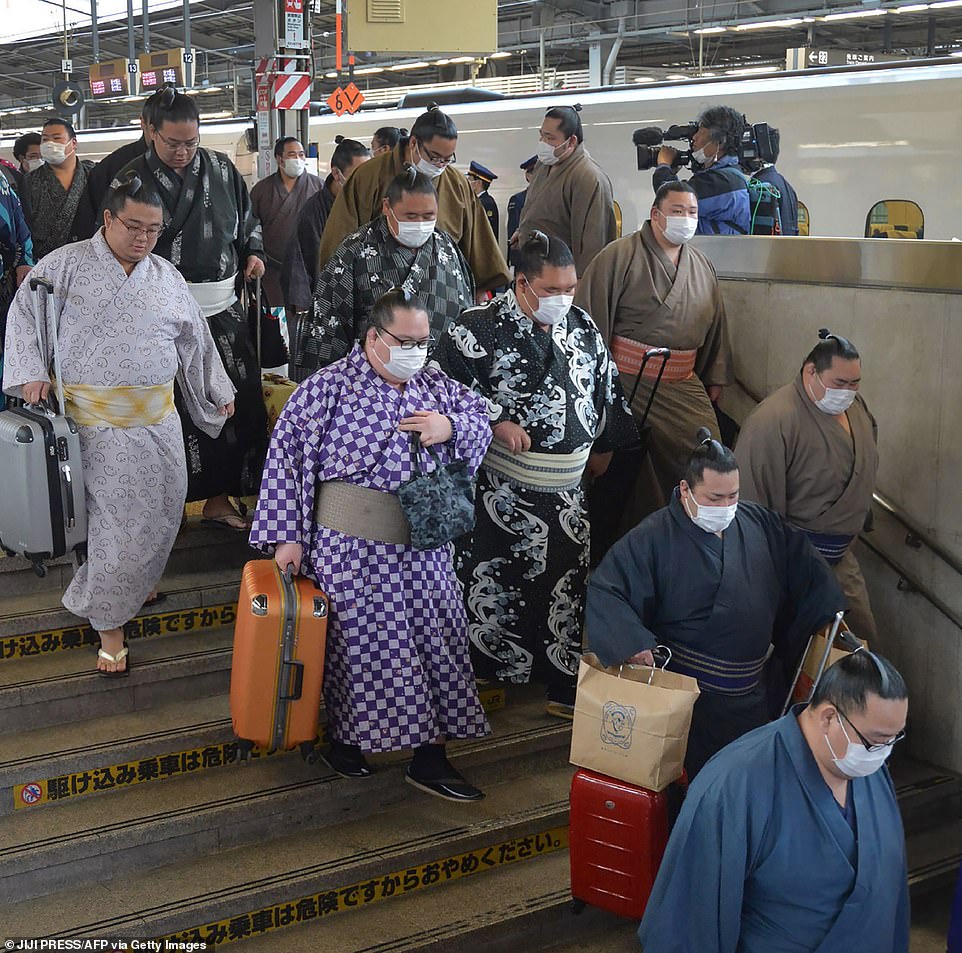 Italy and Iran began introducing the sort of containment measures previously seen only in China, which has put tens of millions of people under lockdown in Hubei province, the outbreak’s epicentre.

‘This is a crisis for us and it is a big test,’ Xi said during remarks carried by state television.

In a rare admission, at a meeting to coordinate the fight against the virus, Xi added that China must learn from ‘obvious shortcomings exposed’ during its response.

The WHO has praised Beijing for its handling of the epidemic, but China has been criticised at home for silencing early warnings from a whistleblower doctor who later died from the virus.

South Korea’s infections nearly trebled over the weekend and it now has the highest number of infections outside China, except from the Diamond Princess cruise liner.

Around half of South Korea’s cases have been linked to the Shincheonji Church of Jesus sect in the southern city of Daegu, where thousands of members have been quarantined or asked to stay at home. 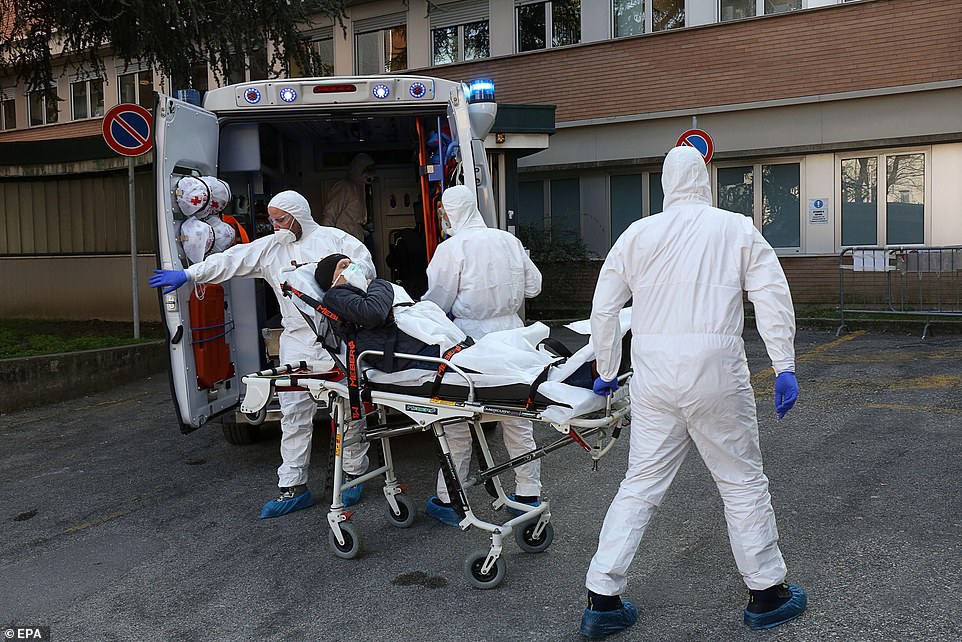 The second patient to die was an elderly woman whose death has triggered the closing down of shops, offices and community centres in Casalpusterlengo, according to Italian news agency Ansa. Pictured are medical workers outside a hospital in Padua 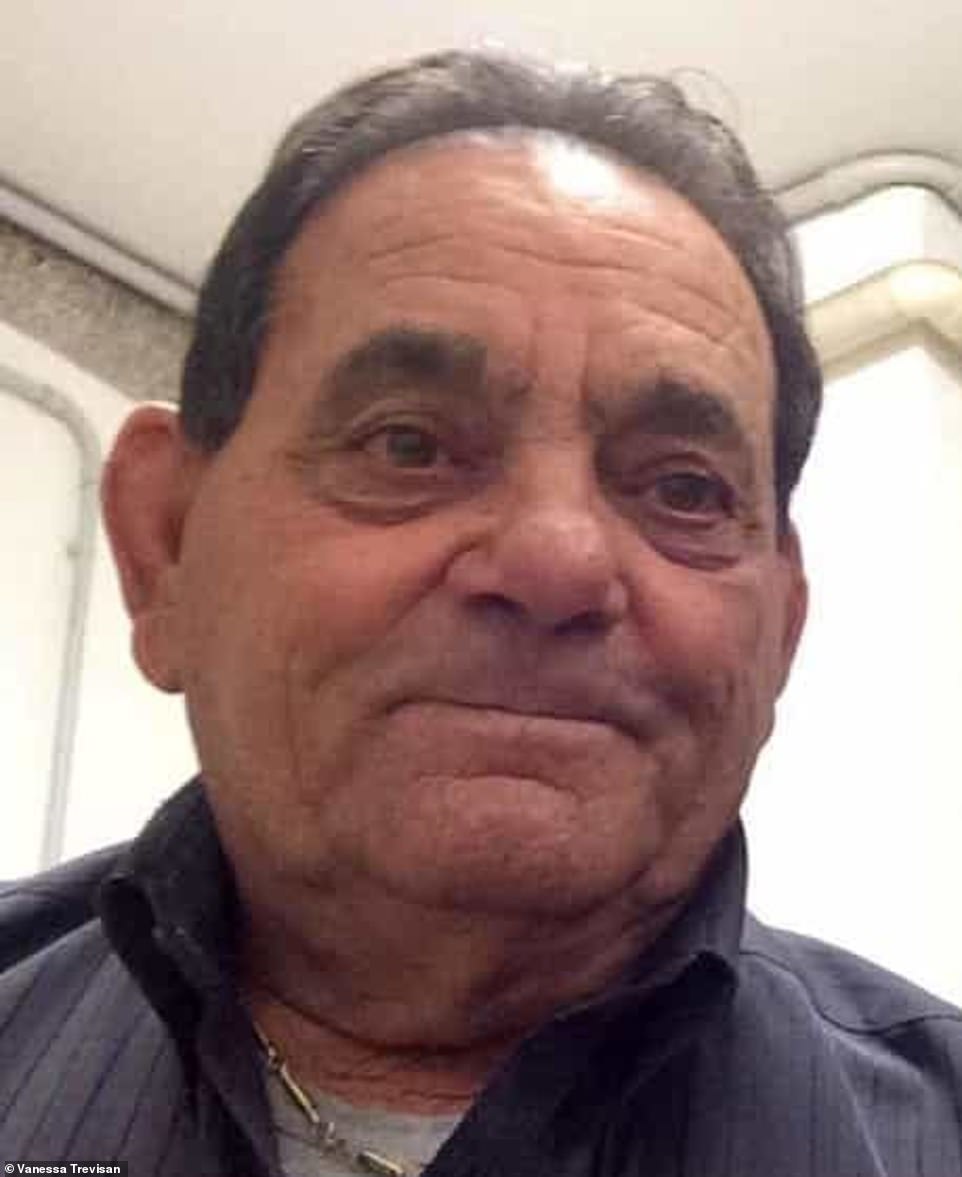 The first to die was retired bricklayer Adriano Trevisan, 78, (pictured) who passed away in a hospital in north eastern Italy on Friday evening 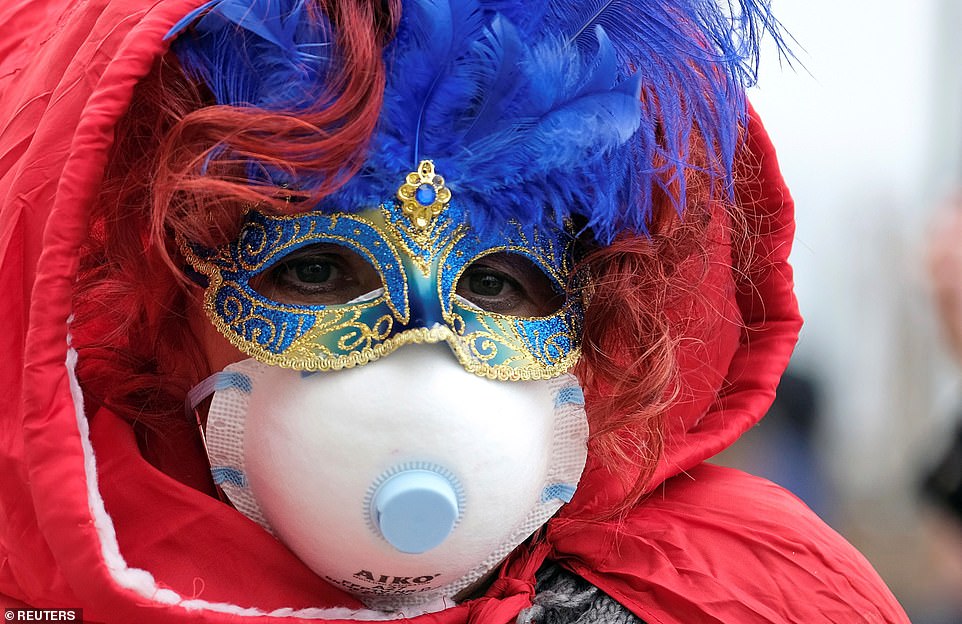 The last two days of the carnival in Venice, as well as Sunday night’s festivities, have been cancelled because of an outbreak of coronavirus. Pictured: Attendee wearing a facemask

Virus panic crept onto catwalks in Italy, leading to the cancellation of some runway shows at Milan Fashion Week. Others were held behind closed doors and livestreamed.

Most cases are confined to the northern town of Codogno, about 43 miles southeast of Milan.

Italy became the first European country to report one of its nationals died from the virus on Friday.

Two more fatalities came over the weekend but Prime Minister Giuseppe Conte urged people ‘not to give in to panic’, and asked them to follow the advice of health authorities. 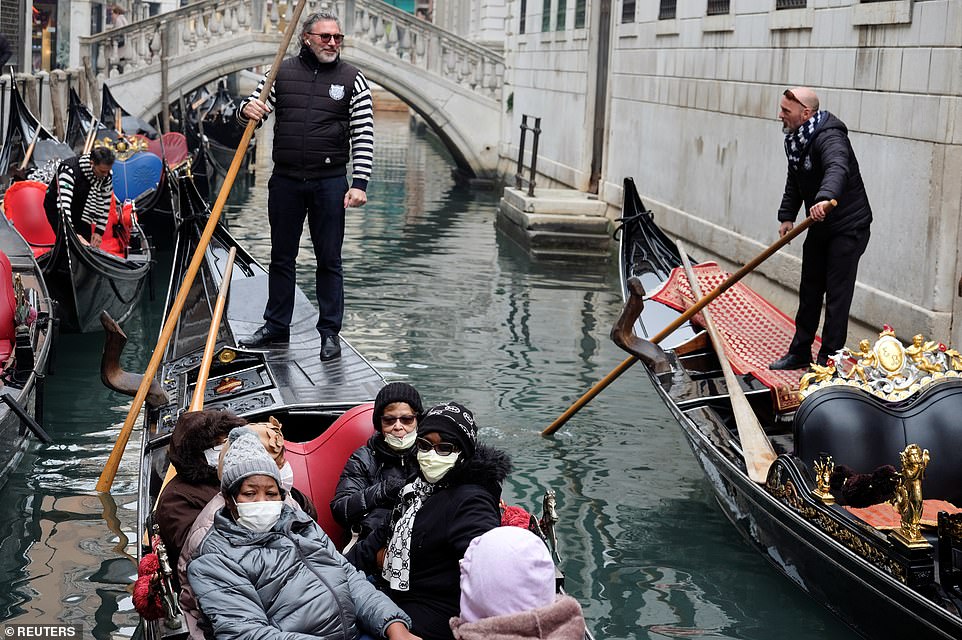 Tourists wear protective face masks in a gondola, because of an outbreak of coronavirus, in Venice 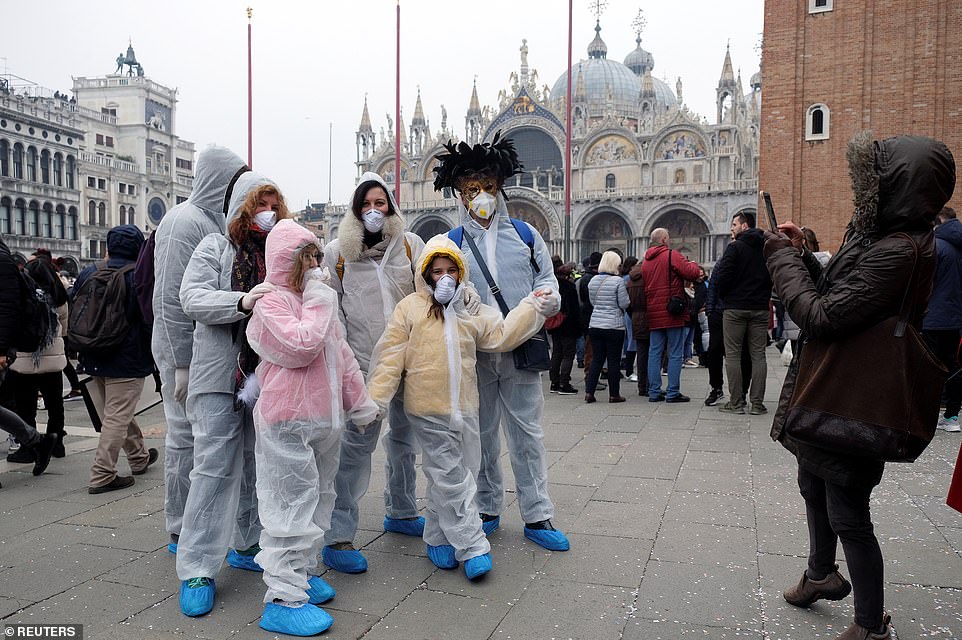 Carnival revellers wear protective face masks at Venice Carnival, which the last two days of, as well as Sunday night’s festivities, have been cancelled

‘The rapid increase in reported cases in Italy over the past two days is of concern,’ World Health Organization spokesperson Tarik Jasarevic said.

Not all reported cases seem to have clear epidemiological links, such as travel history to China or contact with a confirmed case, Jasarevic added.

‘At this stage, we need to focus on limiting further human to human transmission.’

Iran ordered the closure of schools, universities and cultural centres across 14 provinces following eight deaths – the most outside East Asia.

The outbreak in the Islamic Republic surfaced Wednesday and quickly grew to 43 confirmed infections, a sudden rise that prompted regional travel restrictions. 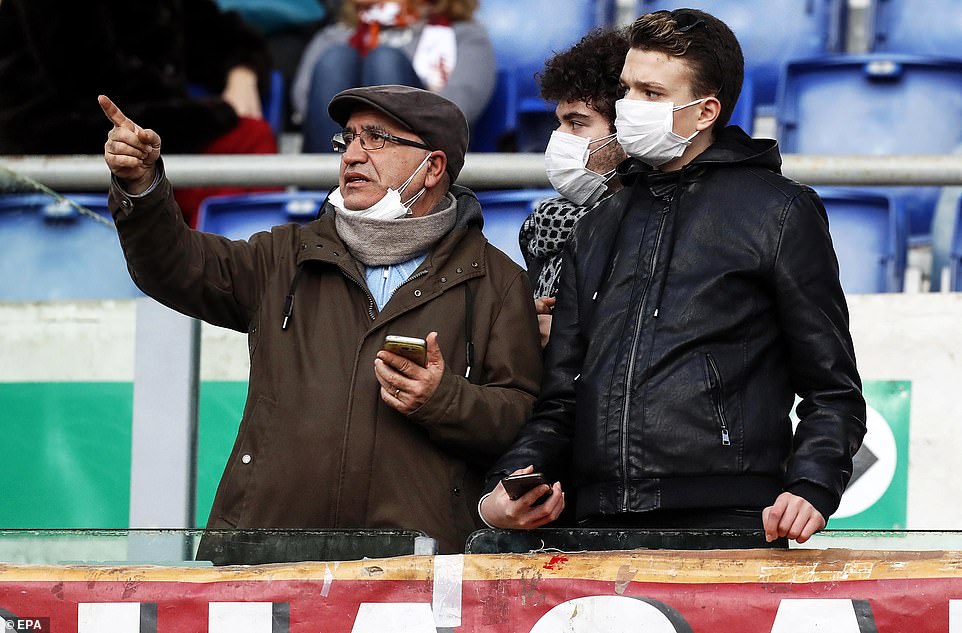 Roma supporters wear protective face masks due to the Coronavirus COVID-19 epidemic prior to the Italian Serie A soccer match between AS Roma and US Lecce at the Olimpico stadium in Rome, Italy 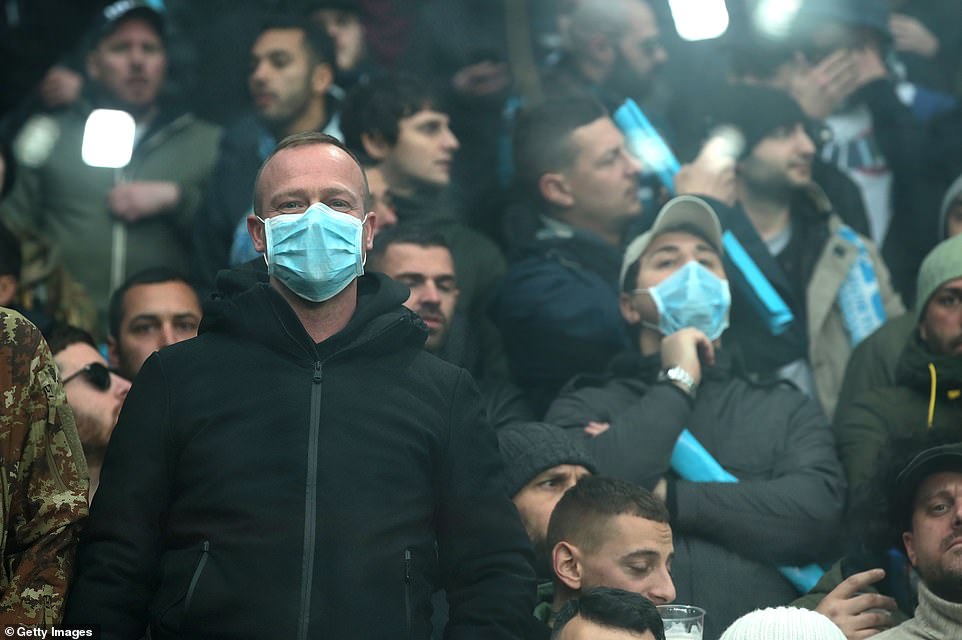 Like the Italian leader, he, too, said there is no reason to panic.

But East Anglia Prof. Hunter said the situation in Iran has ‘major implications’ for the Middle East.

‘It is unlikely that Iran will have the resources and facilities to adequately identify cases and adequately manage them if case numbers are large,’ Prof. Hunter said.

Pakistan and Turkey announced the closure of land crossings with Iran while Afghanistan said it was suspending travel to the country.

The outbreak in China remains concentrated in the city of Wuhan – locked down one month ago – where the virus is believed to have emanated from a live animal market in December.

China’s infection rate has slowed, but flip-flopping over counting methods has sown confusion over its data.

There also was growing concern over the difficulty of detecting the virus. 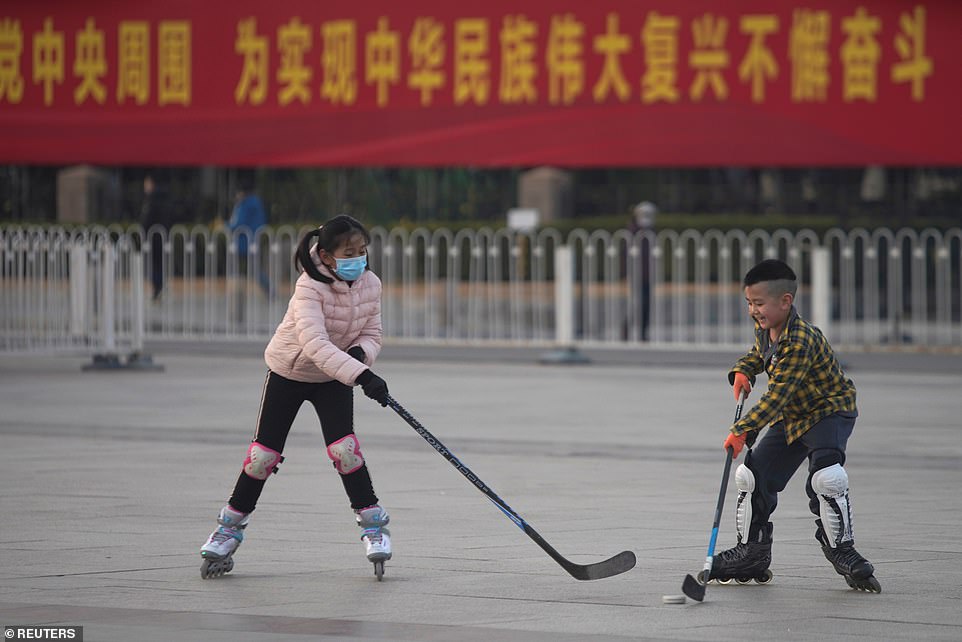 Children wearing face masks play hockey on rollers, following an outbreak of the novel coronavirus in the country, in Beijing 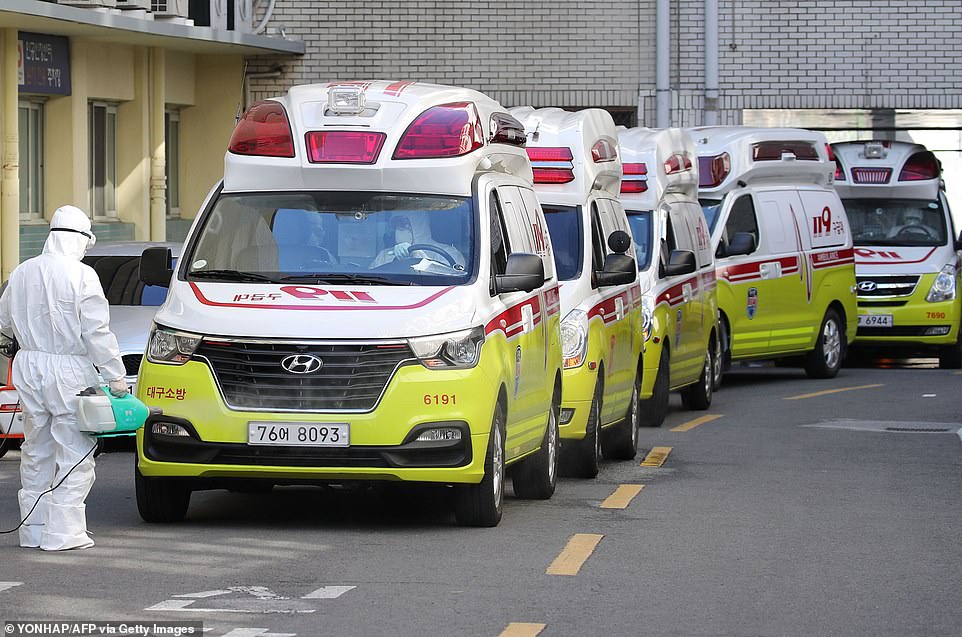 Ambulances carrying patients infected with the COVID-19 coronavirus arrive at a hospital in Daegu, South Korea on Sunday 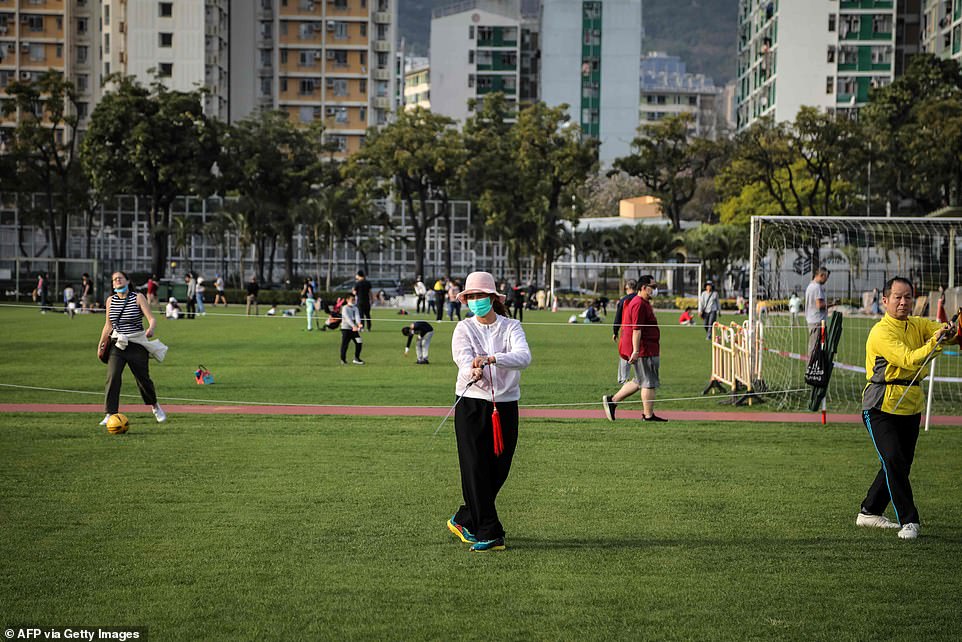 A woman practises Wushu, a Chinese martial art, while wearing a mask as a precautionary measure against the spread of the Covid-19 novel coronavirus in Hong Kong

Similarly in Israel, authorities confirmed that a second Israeli citizen who returned from the ship had tested positive. They were among 11 Israelis allowed off the ship and flown home after initially testing negative.

Japan has been criticised over its handling of cases aboard the vessel quarantined off Yokohama.

A third passenger died Sunday, Japan’s health ministry said, without specifying if it was as a result of the virus.

Four Britons who returned from the Diamond Princess on Saturday also tested positive for the COVID-19 illness, the NHS health service said.