World Cup pundit and former Germany forward Sandro Wagner has been forced to apologise after referring to Qatari traditional dress as ‘bathrobes’.

Wagner was commenting for German broadcasters ZDF in his country’s 1-1 draw with Spain on Sunday when he made the disparaging remark about the traditional thaub dress.

Towards the end of the game at the Al Bayt Stadium in Al Khor, the 35-year-old said he had thought one end of the ground was filled with German fans wearing the country’s famous white shirt.

‘I thought before that the whole corner was full of German fans. Then I realised it was the Qatari bathrobes,’ Wagner said. 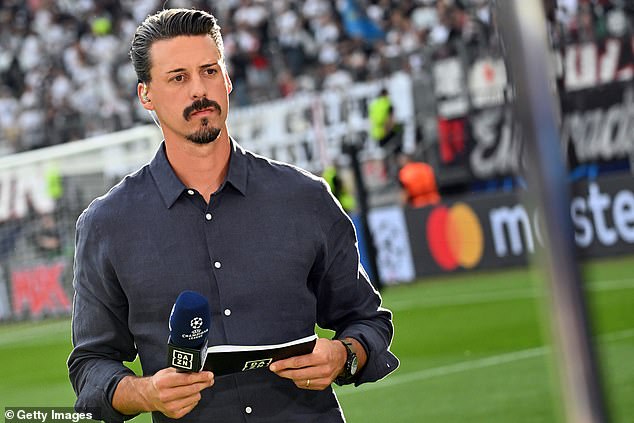 Sandro Wagner, 35, has been forced to apologise after referring to Qatari traditional dress as ‘bathrobes’. He is pictured in September 2022 working as a pundit for Eintracht Frankurt’s home clash with Sporting CP 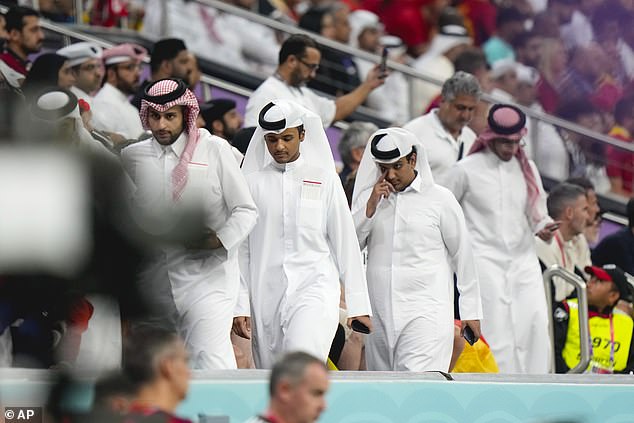 Wagner was referring to the thaub, the traditional white full-length robes with long sleeves worn by many men in Qatar and the wider Arab region.

‘It was an ill-considered saying with an inappropriate remark that I would be better off not saying. If anyone felt offended – sorry, that was zero point zero my intention.’

German broadcaster ZDF has stated that there will be no further consequences for Wagner, who will resume his co-commentating duty on Wednesday’s game between Poland and Argentina.

Wagner’s comments about the traditional dress led to furious reactions on social media. 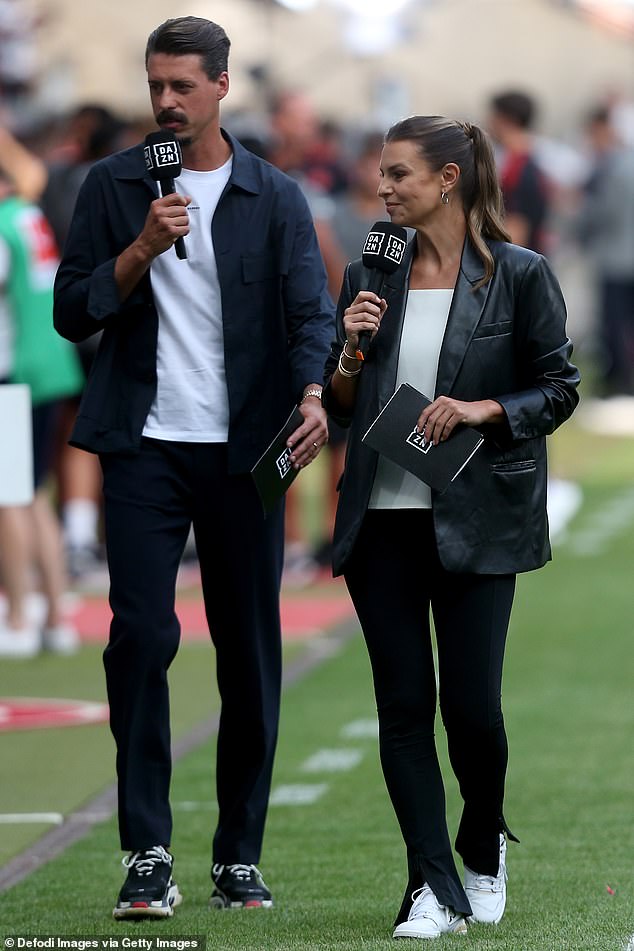 Wagner apologised and said his comments were ‘ill-considered’ and ‘inappropriate’. He is pictured working as a pundit next to presenter Laura Wontorra in August 2022 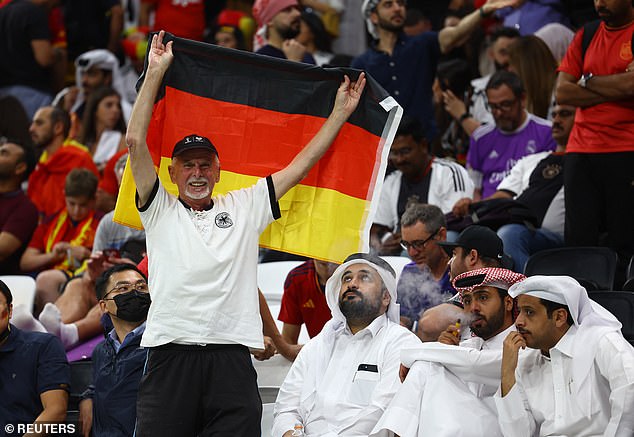 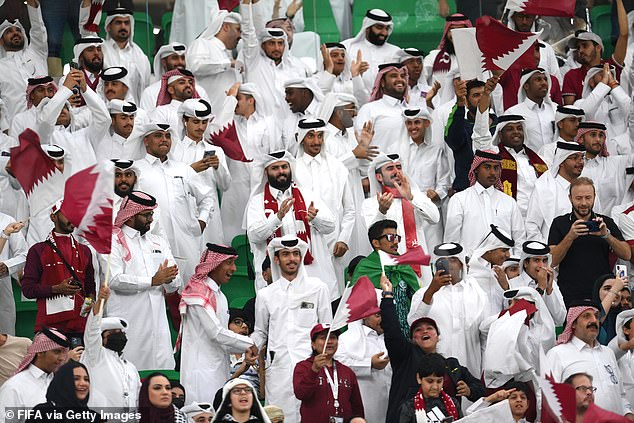 Fans celebrate during the match between Qatar and Senegal at Al Thumama Stadium on November 25, in Doha, Qatar 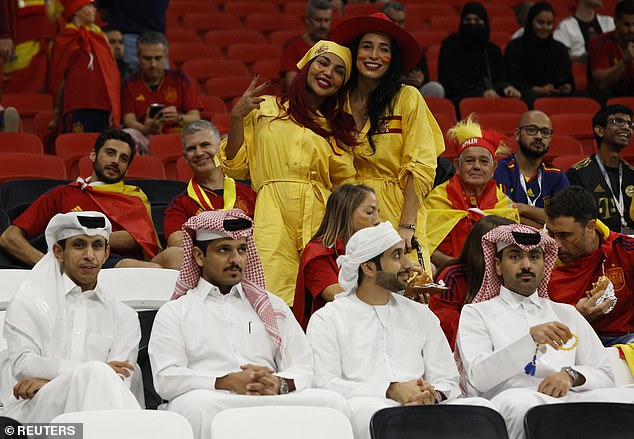 ZDF replied to some of the complaints on Twitter with a short statement: ‘Sandro Wagner´s comments about the thaub unfortunately occurred during an emotional phase of the game. He’s not permitted (to say that). We´ll talk about it.’

Wagner made eight international appearances for Germany during his career, playing for Bayern Munich and Hoffenheim among a host of German clubs.

During the game, Qatari fans protested against the Germany team by covering their mouths while holding pictures of former Germany player Mesut Özil, a target for racist abuse in Germany following the team’s early exit from the World Cup in 2018.

The protesters held the demonstration in a bid to highlight perceived hypocrisy after the German team’s anti-discrimination protest versus Japan in their first group game, after they were stopped from wearing the ‘OneLove’ captain’s armband.

Fans in the stadium held up pictures of former Germany midfielder Ozil, who sensationally retired from international football in 2018 after hitting out against racism within the German FA. 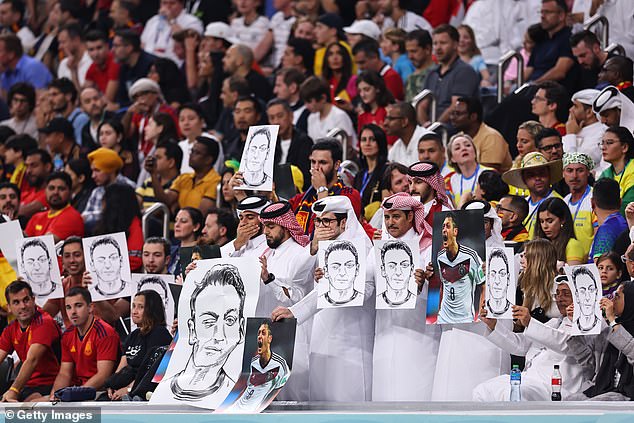 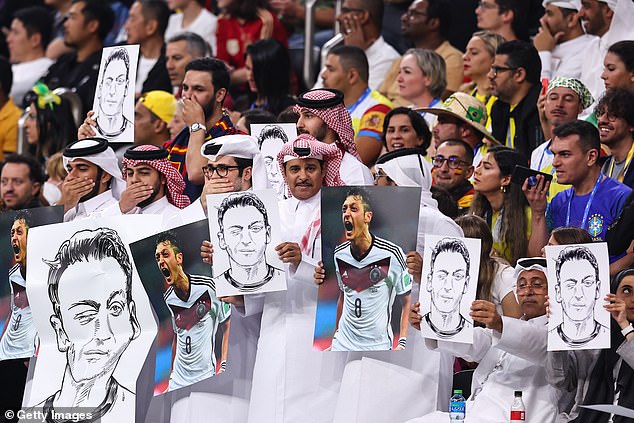 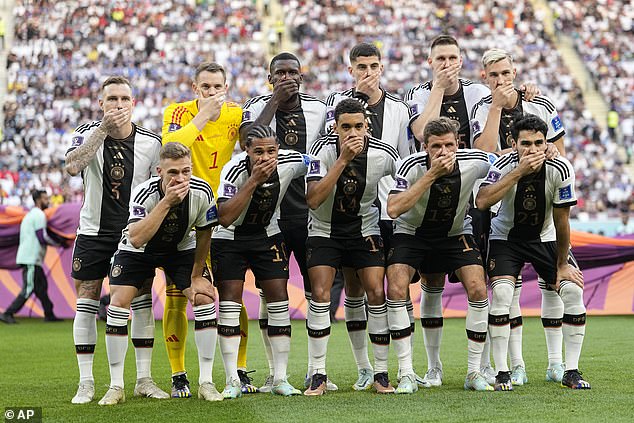 Germany’s players covered their mouths in protest ahead of their 2-1 defeat against Japan last Wednesday, November 23