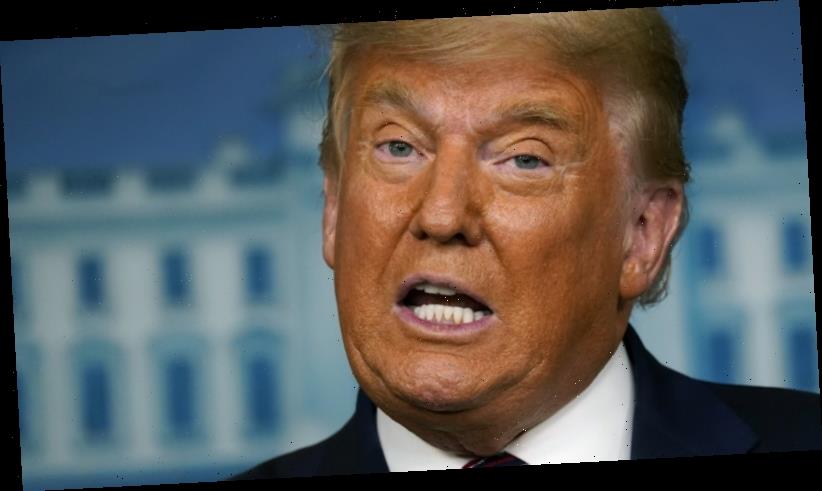 Win or lose, America won’t be able to shake Trump 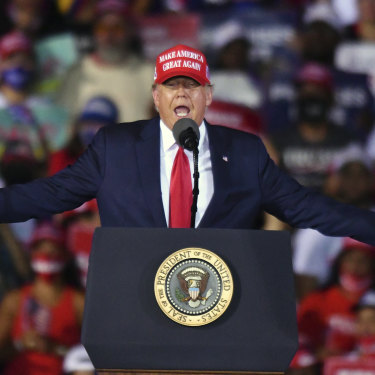 Republicans talk seriously of a Donald Trump campaign for 2024. Credit:AP

It was a Trump rally like no other. Midnight was approaching and two sleeps remained until election day. Thousands of people were gathered at an airport hangar in Miami's northern suburbs. Coronavirus cases were rising again in Florida and the mayor of Miami-Dade County had instituted a midnight curfew to stop people from congregating together. Nobody paid any attention: the President was coming to town and they wanted to see him in the flesh.

The vast majority of the crowd was Hispanic: first- or second-generation immigrants from countries such as Cuba, Venezuela and Nicaragua. All ages were represented: parents had brought young children along and there were plenty of excited teenagers in red "Make America Great Again" hats. When Trump descended from Air Force One, the crowd launched into chants of "viva Trump" and "we love you".

It was the perfect message for an audience packed with exiles from left-wing dictatorships. As Trump spoke, members of the crowd gazed up at him, enraptured. The event had an almost messianic feel.

"What a great victory we had [in 2016] and we're going to have an even bigger victory," Trump said. "Two days from now, we’re going to win my home state of Florida and we are going to win four more years in the White House."

Two days after election day, prospects of re-election were fading fast, but that is not the way Trump sees the world. 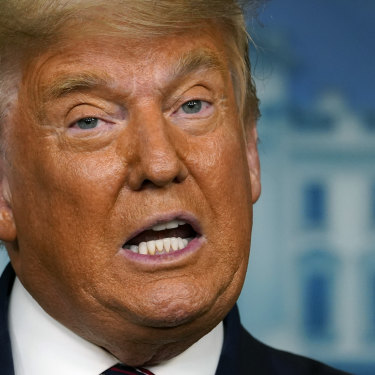 The results in Florida on election night were the first sign that Democrats were not going to enjoy the sweeping victory they had hoped for. Trump won the nation's third most populous state by 3 percentage points, doubling his margin of victory in 2016.

As expected, turnout from Democratic voters was through the roof. But so was the turnout from Republicans, reflecting the depth and resilience of Trump's relationship with his base. In fact, 5 million more Americans voted for Trump this year than in 2016.

Democrats – and their allies in the Never Trump movement – had hoped not just to remove Trump from office, but to drive a stake through the heart of Trumpism on November 3. It didn't happen. Even before the final result was known, Republicans were already predicting that Trump would run for a delayed second term in 2024. 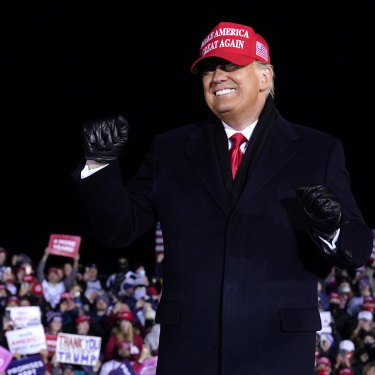 The passion Donald Trump's supporters feel for him is on display at his campaign rallies. Credit:AP

At the rally in Miami, Trump ran through a list of policy reasons why people should award him a second term.

"With your vote, we will continue to cut your taxes, cut regulations, support our great police, support our great military, protect your Second Amendment, defend religious liberty and ensure more products are proudly stamped with that wonderful phrase: made in the USA," he said.

Many of Trump's policy positions – like low taxes, gun rights and opposition to abortion – are standard Republican fare. His foreign policy isolationism has been more transformative.

"For decades, our politicians spent trillions of dollars rebuilding foreign nations, fighting ridiculous foreign wars," he said at the rally to big cheers from the crowd.

It was easy to forget that it was Trump's Republican predecessor, George W Bush, who led the US into the Iraq War. Opposition to America as "the world's policeman" will live on after Trump on the US right – as will his hawkish approach to trade with China.

When you speak to passionate Trump supporters, while they do bring up policy issues (his management of the economy in particular), there's actually something far more personal at work. They say they love that he has kept so many of his promises. They love that Trump is "not a politician" and that he "tells it like it is".

More than simply delivering on specific policies, Trumpism is about channelling grievances against conservatives' perceived enemies.

Since the election, Trump has promoted the baseless conspiracy theory that the election is being stolen from him by Democrats perpetrating voter fraud.

Revelling in being "politically incorrect" and offending progressive sensibilities is a hallmark of conservative politics in the Trump era. At a Trump rally in Georgia, Republican Senator David Perdue deliberately mispronounced Kamala Harris's name: "Ka-MAL-a (sic), Ka-MAL-a or Kamala, Kamala, Ka-mala, -mala, -mala, I don't know, whatever," he said to loud applause from the crowd.

Gone are the genteel days of Bush and Romney-style Republicanism; in the Trump era playing nice is seen as a sign of weakness. You don't just want to defeat your opponents, but humiliate them.

Roughly half of the Trump supporters in the survey, for example, agreed with the statement: "Once our government leaders and the authorities condemn the dangerous elements in our society, it will be the duty of every patriotic citizen to help stomp out the rot that is poisoning our country from within."

Trump's most passionate supporters, Altemeyer and Dean write, "are submissive, fearful and longing for a mighty leader who will protect them from life's threats. They divide the world into friend and foe, with the latter greatly outnumbering the former."

Trump has demonstrated the political power of demonising the mainstream media, which conservatives believe is biased against them. When questioned by a CNN reporter earlier this year, Republican Senator Martha McSally called the journalist a "liberal hack". Her campaign team quickly launched a website – www.liberalhack.com – where you could buy T-shirts featuring the insult.

In a speech last year, Republican Senator Josh Hawley said: "The cosmopolitan elite look down on the common affections that once bound this nation together: things like place and national feeling and religious faith."

The language was loftier than at a Trump rally, but the sense of grievance was the same. One of Hawley's big priorities in the Senate has been taking on social media companies for alleged bias against conservatives – a theme Trump regularly hammers at his rallies.

Trump has also won overwhelming support among evangelical Christians by positioning himself as a warrior fighting against secular America. "He’s literally saved Christianity," Trump's son Eric said recently in an interview. "I mean, there's a full-out war on faith in this country by the other side."

Trump also stands out for the way he has normalised conspiratorial thinking in the Republican Party. Historian Richard Hofstadter famously described "the paranoid style in American politics", citing the belief among far-right groups that the US government had been infiltrated by communists during the Cold War. 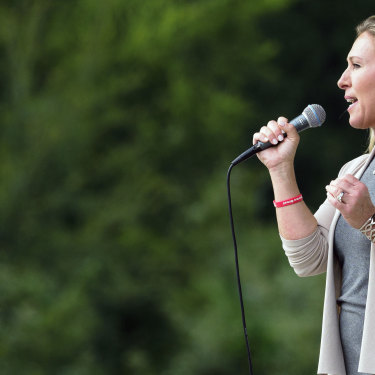 The paranoid style is no longer fringe in the age of Trump. Trump built support in the Republican Party by promoting the "birther" conspiracy that Barack Obama was born overseas and therefore ineligible to serve as president. He speaks darkly of a "deep state" that is out to get him. He has refused to condemn the QAnon movement, an internet-driven conspiracy that alleges a cabal of Satan-worshiping paedophiles is running a global child sex trafficking ring. On November 3, QAnon supporter Marjorie Taylor Greene, a Republican from Georgia, was elected to the US House of Representatives.

While an array of Republicans is trying to position themselves as Trump's rightful heir, none posses his singular star power as a billionaire businessman and former reality TV star. Even in defeat, Trump will remain the de facto leader of the Republican Party – perhaps even a self-styled president-in-exile. His followers would continue flocking to his rallies and would avidly consume any television or radio show he hosts. It would be the perfect platform for another run for the presidency in four years, aged 78.

"I would absolutely expect the President to stay involved in politics and would absolutely put him on the shortlist of people who are likely to run in 2024," former acting White House chief of staff Mick Mulvaney said at an event hosted by the International and European Affairs.

"He has got the apparatus, he has got the support," former Trump aide Bryan Lanza told the BBC. "I think he can make a strong case to run again and I think the Republicans would step aside and let it happen."

The Trump genie is well and truly out of the bottle and won't be jammed back in any time soon.

Understand the election result and its aftermath with expert analysis from US correspondent Matthew Knott. Sign up to The Sydney Morning Herald‘s newsletter here, The Age‘s here, Brisbane Times‘ here and WAtoday‘s here.