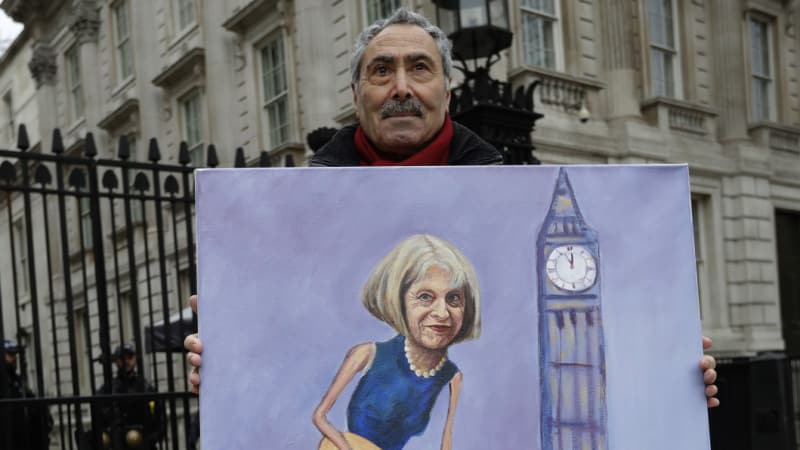 Why the British Parliament snapped

London: It was a day of extraordinary high drama in the British Parliament that changed almost nothing.

Brexit remains on a knife edge between compromise and chaos.

Prime Minister Theresa May lost as many votes in Parliament in one day as the most recent Labour PM Gordon Brown lost in his entire premiership (as London's Telegraph’s political editor pointed out). 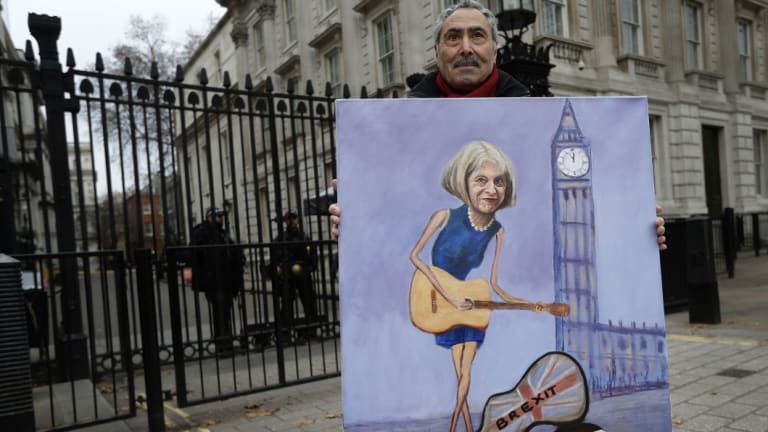 Weird times: Artist Kaya Mar displays his painting of British PM Theresa May in front of Downing Street in London, on Tuesday.Credit:AP

One of those votes held May’s government in contempt of Parliament, over its refusal to hand over the legal advice of Attorney-General Geoffrey Cox on May’s Brexit deal with the EU.

It’s not clear if a British government has ever before been held in contempt of the Parliament it supposedly has the confidence of.

Certainly, you’d think a government found in contempt of Parliament wouldn’t be in charge for long.

You’d think. But a new election is far from the most likely consequence of Tuesday’s events.

These are weird times for British democracy.

Over the last year the tussle between Britain’s government and Parliament has become more and more fierce. 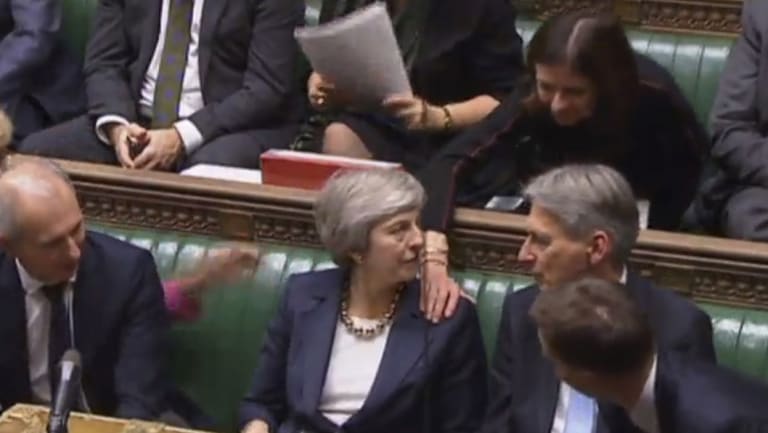 Theresa May is congratulated by Conservative Party ministers in the House of Commons after speaking at the start of a five-day debate on Brexit .Credit:PA

It’s an iteration of the oldest battle in politics: between the rulers and the representatives, between elected MPs and the executive (a battle to be fought again in the US in the next few years, with President Donald Trump up against a Democrat Congress).

The focus here is Brexit. MPs have become more and more tetchy about the government’s control over the process, and apparent determination to minimise Parliament’s ability to interfere.

Parliament – made up of MPs who mostly campaigned against Brexit, but who represent a country that voted for it – resented preparatory Brexit bills that gave the government sweeping powers to reset Britain’s laws after it leaves the EU. It rankled. Making laws is usually Parliament’s job.

Finally, presented with a deal that compromises the UK’s sovereignty and trading powers to try to smooth the path of Brexit, having demanded to see the government’s legal advice on what it all means and being turned down, Parliament snapped.

It staged a humiliating overture to May’s moment of truth, as she stood to present her Brexit deal to the House of Commons and told them, in frank terms, that they must support it or face the wrath of the country.

It seems more likely than not that they will vote the deal down next week – though they may later relent.

But at this point all outcomes are unlikely, the only question is which unlikely outcome will actually happen.

There are so many ironies. Brexiters who wanted to ‘take back control’ have thrown everything into a holy mess. Those who regretted that the Commons was not sovereign are now furious at the idea the Commons might vote to cancel Brexit.

This is not a legal mess. The legal principles have been plain for a while, though many people chose to ignore them. It’s a political mess.

One big problem is that Parliament seems to think it can vote against a ‘no deal’ Brexit without cancelling Brexit, instead somehow changing the deal May presented to them.

That would be like voting against the weather. Brexit will happen by force of international law on March 29, and there is no other deal on the table.

It would take a positive act of parliament to change that – and if parliament voted to cancel or postpone Brexit without the government’s ok, that would be an extraordinary moment.

It would also not be a move the country would support, by latest polls. It hasn’t noticeably changed its mind since the 2016 referendum.

There is no apparent other option. Perhaps an election, though it’s very unlikely the country would want that either, especially as it would solve precisely nothing on Brexit, only delay the inevitable and put a different government in the same conundrum.

The country and its Parliament know what they don’t want.

They have no idea what they do want.