Home » World News » While You Were Sleeping: 5 stories you might have missed, Jan 13 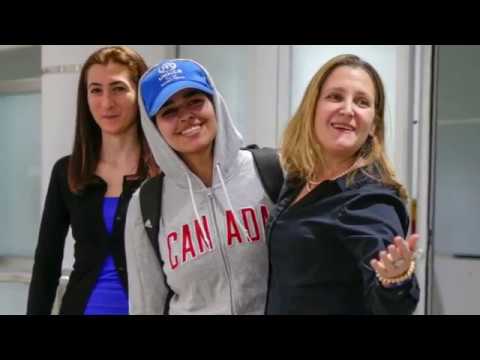 While You Were Sleeping: 5 stories you might have missed, Jan 13

An 18-year-old Saudi woman who fled her family this week saying she feared for her life arrived in Toronto’s international airport after being granted asylum in Canada, where Foreign Minister Chrystia Freeland welcomed her as a brave new Canadian.

Rahaf Mohammed al-Qunun grabbed international attention this week after she barricaded herself in a Bangkok airport hotel room to resist being sent home to her family, which denies any abuse.

Qunun refused to meet her father and brother, who arrived in Bangkok to try to take her back to Saudi Arabia.

Qunun arrived at Toronto’s Pearson International Airport on Saturday morning, wearing a hoodie emblazoned with the word Canada in red, and a blue cap with the logo of the United Nations High Commissioner for Refugees (UNHCR), which has granted her refugee status.

Julian Castro, the telegenic former mayor of San Antonio, Texas and an Obama-era Cabinet member, launched his bid  to become the nation’s first Hispanic president, emphasising a message of hope and diversity at a time when Americans are locked in angry debate over immigration and border security.

“I am a candidate for president of the United States,” the 44-year-old Castro told a large crowd in San Antonio’s historic Guadalupe Plaza, in a speech that frequently invoked the immigrant heritage that brought his family to the US from Mexico.

Often called a rising star in the Democratic Party, Castro, who was Obama’s secretary of housing – and the youngest member of that Cabinet – is expected to be part of a huge and diverse field of candidates eager to challenge President Donald Trump.

Trump blasts FBI counterintel probe into whether he worked for Russia

President Donald Trump blasted the FBI on Saturday, insisting it acted “for no reason & with no proof” when it opened an investigation into whether he was acting on Russia’s behalf after he fired the agency’s director, James Comey, in May 2017.

The New York Times reported that the FBI launched the previously undisclosed counterintelligence investigation to determine whether Trump posed a national security threat, at the same time that it opened a criminal probe into possible obstruction of justice by the president.

The FBI investigation was subsequently folded into the broader probe by Special Counsel Robert Mueller into Russia’s meddling in the 2016 election and possible collaboration by the Trump campaign.

Liverpool opened up a seven-point gap at the top of the Premier League with a 1-0 win at Brighton & Hove Albion, while Arsenal’s poor away form continued with a 1-0 defeat at West Ham United.

With nearest challengers Manchester City not playing until Monday, Liverpool went into their clash at Brighton on the back of two successive defeats in all competitions and were made to work hard for the three points.

Neither side had a single shot on target in the first half, with the match settled by a Mohamed Salah penalty in the second half. Liverpool’s 50th clean sheet under Juergen Klopp carried them home.

Singers Anne-Marie, Dua Lipa, Jess Glynne and George Ezra are among the nominees for next month’s BRIT Awards, Britain’s annual pop music honours, in a list dominated by young talent.

Anne-Marie is in the running for four prizes – British Female Solo Artist, Mastercard British Album of the Year for Speak Your Mind, British Single and British Artist Video of the Year for 2002 at the British Record Industry Trust (BRIT) awards, to be held on Feb 20 in London.

Lipa, who triumphed with two wins at last year’s event, is nominated in the British Single category for IDGAF as well as her One Kiss collaboration with DJ Calvin Harris. The two songs are also in the running for British Artist Video of the Year.