Home » World News » 'What is going on here?' Tucker asks why Dems have turned on Joe 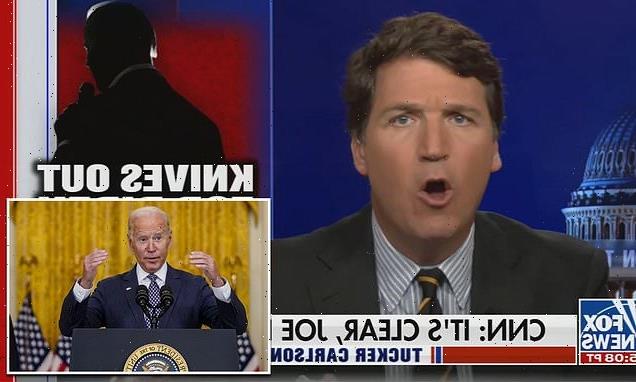 'What is going on here?' Tucker asks why Dems have turned on Joe

‘What is going on here?’ FoxNews’s Tucker Carlson demands to know why top Dems and liberal news outlets including CNN have turned on Biden amid Afghan crisis and claims president’s closest advisers know he’s ‘senile’

Tucker Carlson has demanded to know why Joe Biden’s closest allies and fawning liberal TV networks have turned on the president over the Afghan crisis.

Speaking on his Fox News show Friday night, Carlson said: ‘What is going on here? These are literally the people who got Joe Biden elected. He wouldn’t be president without these people. Now, just seven months in, they’re telling you he has failed personally? It does not make sense.’

He made the remark moments after sharing a clip of CNN host Brianna Keilar turning on the president over the fall of Kabul to the Taliban after the US withdrew, which she said was ‘stunning’ to both his administration and the American people.

Keilar also took aim at Biden’s earlier claims that he knew the withdrawal from Afghanistan would be chaotic,  and that its capital Kabul could potentially defend itself until the end of 2021.

She said: ‘And many of the promises, predictions, and the words of the president and his White House are coming back to haunt them.’

Carlson claimed to viewers that CNN stars are fed opinions they must share by network president Jeff Zucker, and questioned why the liberal channel has now turned on Biden.

The Fox star also referred to Defense Secretary Mark Austin, who directly contradicted the president’s claim that the Taliban hadn’t attacked any Americans trying to get to safety moments after Biden made the assertion. 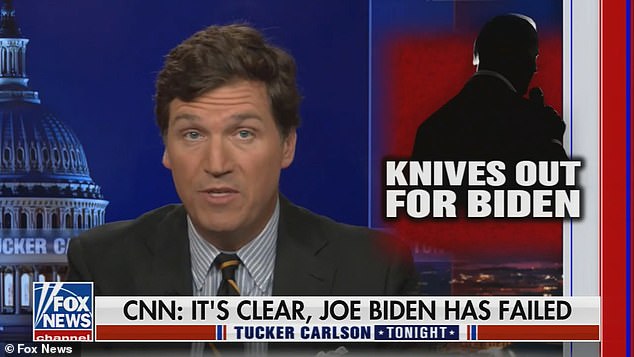 He said: ‘Afghanistan is hardly Biden’s first disaster. As of tonight, our southern border has collapsed, the murder rate is spiking in our cities, the CVODI vaccines do not work, inflation’s out of control, and the country’s entire population of school children hasn’t been educated in more than a year. All of that’s been going on. None of that seemed to bother CNN in the slightest.

‘In fact, they reserved their energy to attack anyone who noticed those trends. But now, suddenly their anchors are weeping on the air because Americans are trapped in Afghanistan.

‘They don’t notice the 70,000 who die every year from drug overdoses. But this has sent them into a self-riotous rage. Call us cynical, but we don’t buy it. Something else is going on here. We don’t know what it is, exactly, but it’s pretty obvious.’

Earlier in his monolog, Carlson offered his own theory, insisting that the 78 year-old president ‘is senile’ and that this week’s events – which saw the Taliban surround the perimeter of Kabul’s Hamid Karzai Airport – highlighted Biden’s inability to govern.

During an interview with ABC News screened Thursday, Biden estimated that around 15,000 Americans, and up to 65,000 Afghans the US wants to resettle in America, remain trapped in territory that is now hostile, with no guarantees they’ll make it to safety. 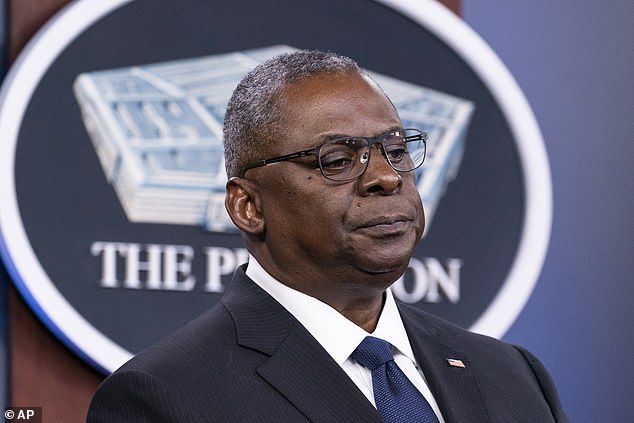 He referenced Defense Secretary Lloyd Austin, pictured, who directly contradicted Biden over the president’s claim the Taliban had not attacked any Americans trying to flee Kabul

Carlson said: ‘We’ve learned a lot in the past five days. Maybe the important thing we’ve learned is that Joe Biden is not capable of running the country. Joe Biden is senile. Saying that out loud is not an attack on Biden.’

He claimed everyone working around Biden knows of the president’s alleged cognitive decline – and said the Afghan saga exposed it to the world, putting the US in danger.

Carlson explained: ‘In the last week, we’ve been reminded how tiny our domestic concerns actually are. They’re neuroses born of narcissism. A Chinese flu virus? Please. That’s hardly the scariest thing going on in the world right now. Not even close. The entire United States military has just been humiliated by illiterate peasants in turbans — and if that’s not insulting enough, many of them were carrying our rifles as they did it.

‘It makes you wonder about the future of the west, and who will replace us when we’re gone. Someone in authority probably ought to be thinking about that, and a lot of other things. What will we do when the Chinese finally move against Taiwan? How will we respond when there’s a credible challenge to the U.S. dollar as the world’s reserve currency? Etc. Etc

‘All we can say for certain at this point is that Joe Biden won’t be making any of the big decisions going forward. Biden isn’t capable of being the president in crisis. So who will be? We can’t say. But it’s clear if you watch closely that things are changing very fast in Washington. 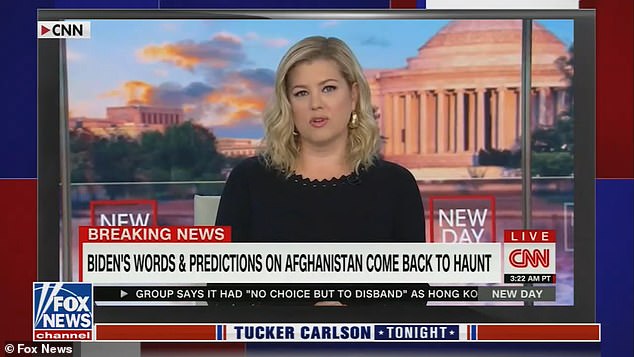 ‘The people around Biden are moving away from him, in ways that are not subtle. Why is this happening now? Was it always the plan? Did the party that hates white guys finally realize it was being led by one? Again, we don’t know the answer. But the signs are everywhere, and they’re strikingly obvious.

‘Some of Biden’s most senior appointees are contradicting him in public. If you cover politics, it’s shocking to see that.

‘This is a violation of the first and most ruthlessly enforced rule in any White House: Don’t diminish the boss.’

Carlson was referring to Defense Secretary Lloyd Austin, who was reported to have directly contradicted the president during a call with officials Friday, when he said that the Taliban had attacked Americans trying to flee. 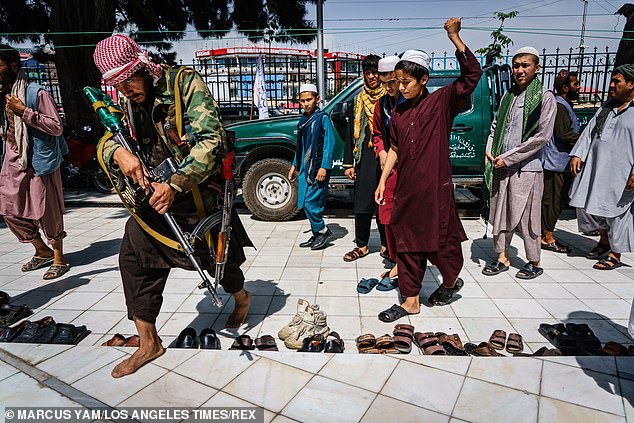 A Taliban fighter is pictured arriving for Friday prayers in Kabul, after the city was re-taken by the extremists in just five days 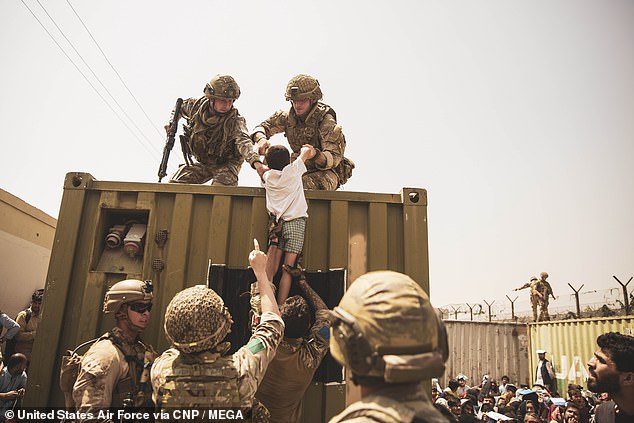 Just minutes earlier, Biden had claimed that there were no reports of Americans being given any trouble from the extremist group, and that they were being given safe passage to board US military jets at the airport.

The president says he hopes to have withdrawn the remainder of US forces from Afghanistan by August 31.

Former President Donald Trump originally signaled plans to withdraw from Afghanistan by May 1, with Biden ultimately following through.

Shocking scenes of desperate Afghans clinging to a C-17 jet were beamed around the world Monday, with three people crushed under the plane’s wheels, and two more falling to their deaths after clinging to its fuselage as it took off.

The president said he did not want to drag the US into a third decade of conflict, which began under President George W Bush weeks after the 9/11 terror attacks.

Biden has repeatedly said that ‘the buck stops with me’ in regards to the withdrawal, with political analysts claiming he timed it in the hopes the issue would be resolved before the 2022 midterm elections.