Uvalde: President Joe Biden landed in the Texas town of Uvalde on Sunday to comfort families ripped apart by the worst US school shooting in a decade.

Outside Robb Elementary School, where the gunman killed 19 students and two teachers, Biden stopped at a memorial of 21 white crosses – one for each of those killed. The first lady added a bouquet of white flowers to hundreds of others in front of the school sign. 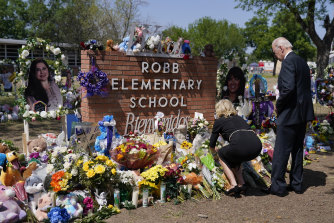 US President Joe Biden and first lady Jill Biden visit Robb Elementary School on Sunday to pay their respects to the victims of a mass shooting that claimed 21 lives.Credit:AP

After visiting the memorial, Biden arrived for Mass at Sacred Heart Catholic Church, where a teacher nearby held up a sign that said: “Mr President, thank you for coming. I’m a teacher.”

Mckinzie Hinojosa, whose cousin Eliahana Torres was killed on Tuesday, said she respected Biden’s decision to mourn with the people of Uvalde, but visiting alone was not enough.

“It’s more than mourning,” she said. “We want change. We want action. It continues to be something that happens over and over and over. A mass shooting happens. It’s on the news. People cry. Then it’s gone. Nobody cares. And then it happens again. And again.

“If there’s anything if I could tell Joe Biden, as it is, just to respect our community while he’s here, and I’m sure he will. But we need change. We need to do something about it.”

Biden’s visit coincided with mounting anger in the town over a decision by local law enforcement agencies to allow the shooter to remain in a classroom for nearly an hour while children made panicked 911 calls for help.

Julian Moreno, who was attending Sunday services at Primera Iglesia Bautista, where he previously served as pastor, said the police had made “a huge mistake” but that he did not hold it against them.

“I feel sorry for them because they have to live with that mistake of just standing by,” Moreno, whose great-granddaughter was among those killed in Tuesday’s shooting.

Police say the gunman, 18-year-old Salvador Ramos, entered the school with an AR-15 semi-automatic rifle after earlier killing his grandmother at the house they shared.

Official accounts of how police responded to the shooting have flip-flopped wildly, with calls mounting for an independent probe.

Biden, a Democrat, has repeatedly called for major changes to America’s gun laws, but has been powerless to stop mass shootings or convince Republicans that stricter controls could stem the carnage.

The Texas visit is his third presidential trip to a mass shooting site, including earlier this month when he visited Buffalo, New York, after a gunman killed 10 black people in a Saturday afternoon attack at a grocery store.

The Uvalde shooting has once again put gun control at the top of the nation’s agenda, months ahead of the November mid-term elections, with supporters of stronger gun laws arguing that the latest bloodshed represents a tipping point. 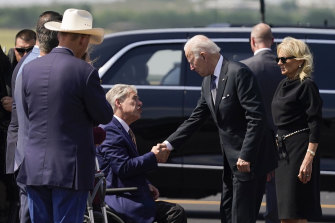 US President Joe Biden and first lady Jill Biden meet Governor Greg Abbott, of Texas, ahead of their visit to Robb Elementary School.Credit:AP

“The president has a real opportunity. The country is desperately asking for a leader to stop the slaughter from gun violence,” said Igor Volsky, executive director of Guns Down America.

Texas Governor Greg Abbott, a Republican, met Biden at the airport on Sunday.

Abbott – a staunch pro-gun advocate – has denied that newly enacted Texas gun laws, including a controversial measure removing licensing requirements for carrying a concealed weapon, were relevant to Tuesday’s bloodshed. Instead, Abbott pointed to mental illness.

Ramos, a high school dropout, had no criminal record and no history of mental illness, but did post threatening messages on social media ahead of the shooting.