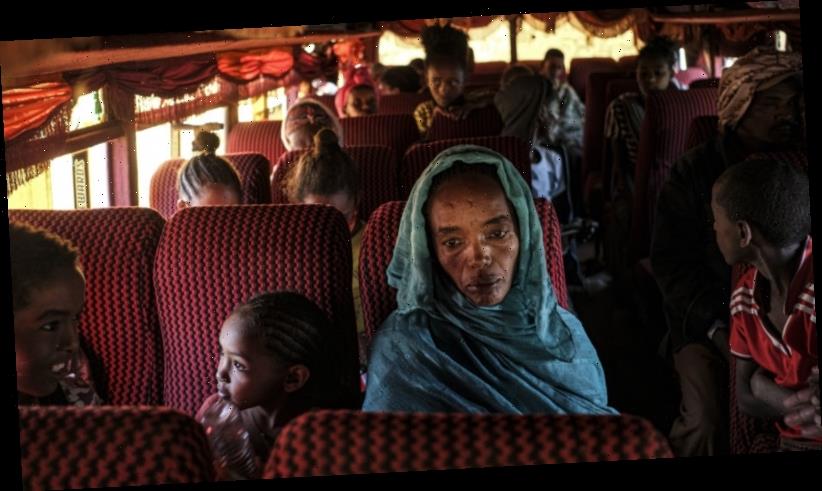 ‘We call the shots’: Ethiopia says UN team shot at for failing to stop

Addis Ababa: A United Nations team visiting refugees in Ethiopia's war-hit Tigray region had failed to stop at two checkpoints when it was shot, the government said, proclaiming it did not need a "babysitter".

The UN security team was seeking access to the Shimelba camp for Eritrean refugees when they were fired at on Sunday. UN spokesman Stephane Dujarric said there were four people in the team assessing roads in the area for aid deliveries. 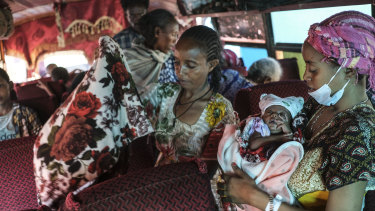 Refugees from the Tigray region of Ethiopia board buses after spending days to weeks at a UNHCR reception centre located in the Sudanese border village of Hamdayet.Credit:Getty

"These are alarming reports and we are engaging at the highest level with the federal government to express our concern and avoid any such incidents in the future," said Dujarric, adding that Secretary-General Antonio Guterres had spoken with Ethiopian Prime Minister Abiy Ahmed.

Abiy's army has battled the Tigray People's Liberation Front (TPLF) in the northern region since November 4.

Thousands are feared dead and the UN estimates that more than 950,000 people have been displaced by the conflict, around 50,000 of them into neighbouring Sudan. The Ethiopian government did not immediately respond to a request for comment on the UN estimate. 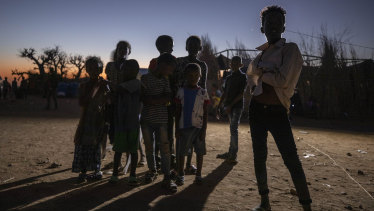 Redwan Hussein, spokesman for the Ethiopian government's taskforce for Tigray, told reporters that the UN team passed through two checkpoints without stopping while driving hastily to an unauthorised area.

"When they were about to break the third one, they were shot at and detained," he said.

Most communications in Tigray are down and access to the area is severely restricted, making it hard to verify either side's statements. It was not immediately possible to reach the TPLF for comment on the latest government statements.

The United Nations and aid agencies are pressing for safe access to Tigray, which is home to more than 5 million people and where 600,000 relied on food aid even before the conflict.

"The agreement we entered with the UN was in the belief that the UN would coordinate with us but the government would call the shots," Redwan said, emphasising that Ethiopia was capable of helping its own people and that humanitarian assistance must be escorted by defence forces.

He also said the government would investigate any reports of atrocities or mass killings and allow independent probes if needed. "Ethiopia is being run by a strong functional government," he added. "It doesn't need a babysitter."

Two diplomatic sources told Reuters the UN team encountered uniformed Eritrean troops, though both Ethiopia and Eritrea have denied any incursion over the border by President Isaias Afwerki's military.

Abiy and Afwerki signed a peace pact ending two decades of hostilities in 2018 and now regard the TPLF as a mutual foe.

Ethiopia's army has captured the regional capital Mekele and declared victory, but TPLF leaders say they are fighting back on various fronts around the highland city.

"There are a few remnants of the militia or special forces not yet controlled … kind of hooligans, outlaws," Redwan said.

Abiy's office said on Monday it was working with the UN and others to extend humanitarian assistance “with a well-coordinated framework led by the federal government.”

Dujarric told reporters in New York that talks on aid access were continuing with the Ethiopian government, but "are we getting unfettered, clear, humanitarian access at this point – no."

In Mekele, a doctor reached by Reuters said the hospital where he worked was "totally non-functional" due to lack of electricity, fuel for generators, oxygen and medical supplies. Medics were unable to perform emergency surgery or effectively treat patients for problems such as childbirth complications and diabetes.

"Patients are dying outside and inside the hospital," he wrote in a message, saying that he was aware of three women who died after delivering babies at home and an infant on a ventilator who died because there was no oxygen.

Ethiopian federal troops were inside the hospital and had not intimidated medical staff or looted, the doctor added.

The government has said it is delivering aid in areas that it controls – including 44 truckloads of food aid delivered to Shire, the main town near the refugee camps, but relief agencies are increasingly frustrated at the difficult access to Tigray.

The Norwegian Refugee Council said it had waited weeks for clearance to deliver food, shelters and other essentials.

"Children, women and men in Tigray have now borne the brunt of this conflict for more than a month without any emergency assistance from outside the region," it said.

"These people can no longer be made to wait. Aid must not be left at a standstill."

Food, medicines and other aid for some 6 million people — some 1 million of them now displaced — are in the balance. Of special concern are camps that are home to nearly 100,000 refugees from Eritrea amid reports that they have been attacked and abducted. The camps are near the border with Eritrea, which some fleeing people have accused of entering the conflict, a charge Ethiopia denies.

Food ran out at the camps days ago.

“The situation on the ground is complicated” at the local level, Dujarric said, and discussions continue with the government “to try to get where we want to be.”

“Regaining access to refugees and others in need is urgent and critical for UNHCR and humanitarian organisations,” the head of the UN refugee agency, Filippo Grandi, tweeted Tuesday.

The UN announced the deal with Ethiopia’s government last Wednesday, saying it was signed on November 29.

The Australian government too has contacted the Ethiopian Government regarding the need to respect human rights, protect civilians and allow full access to humanitarian agencies to those impacted, a spokesperson said on Wednesday.

“It has been a month since I have taken my pills,” said one refugee, Aksamaweet Garazgerer, who said she has HIV and needs antiretrovirals. “I would go every day [to the clinic] and they say tomorrow it will come, the day after tomorrow it will come. But it has not come yet.”

What’s my Midheaven sign? What your Midheaven means for your career