Home » World News » 'We are not prepared to die,' says Maldives as small island states pile on pressure at UN climate talks 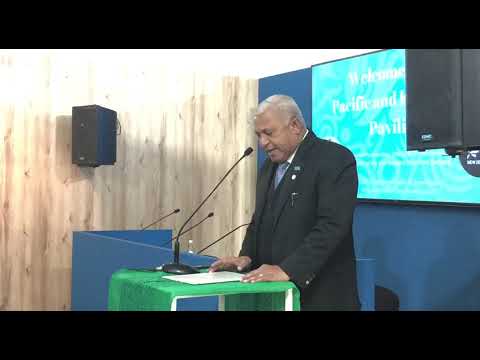 'We are not prepared to die,' says Maldives as small island states pile on pressure at UN climate talks

KATOWICE, Poland – Small island nations, among the most vulnerable to the impacts of climate change, are piling pressure on big polluting nations at UN talks in Poland to commit to deeper emission cuts.

Greenhouse gas emissions from burning fossil fuels, agriculture and deforestation are driving up global temperatures, fuelling more extreme weather and causing sea levels to rise. Many small island states fear being wiped off the map by higher sea levels and more powerful storms, as well as destruction of coral reefs that are the lifeblood of their tourism and fishing industries.

The Maldives, Marshall Islands, Tuvalu, Kiribati and many others are among the most vocal nations at the Dec 2 to 14 climate talks in Katowice in Poland, urging big polluting nations and wealthy states to show more courage and ambition in cutting greenhouse gas emissions.

They also want stronger support from the conference, called COP24, for the UN climate panel’s October special report outlining the need to keep global warming to 1.5 deg C. That report said deeper emission cuts of about 45 per cent had to be made globally by 2030 to have a chance of limiting warming to 1.5 deg C, a level long backed by small island states.

On Thursday (Dec 13), COP23 president and Prime Minister of Fiji Frank Bainimarama made an impassioned plea for nations to ramp up their ambition to curb global emissions.

He said: “We call for the meaningful inclusion of the IPCC’s special report on 1.5 deg C warming in the COP24 decision text. We express deep concern that the findings of the special report, which concluded that the effects of human-induced climate change are worse than previously projected, and that the risk to precincts from loss and damage are extensive.”

The United States, Russia, Saudi Arabia and Kuwait have tried to water down the report’s importance, triggering condemnation.

“We are not prepared to die and the Maldives has no intention of dying. We are not going to become the first victims of the climate crisis. Instead, we are going to do everything in our power to keep our heads above water,” Mohamed Nasheed, former president of the Maldives, told reporters at an event hosted by the Marshall Islands on Thursday.

The president of the Marshall Islands, Dr Hilda Heine, said small island states are willing to increase their national climate action plans pledged in the 2015 Paris Climate Agreement to ensure they play their part in curbing climate change.

“As poor and vulnerable countries, we have committed to do all we can to take greater actions by 2020. We did so not to miss the chance to prevent the most dangerous levels of warming, not to go above 1.5 degrees. We have decided to act despite our limited capacities and we expect the world to also act.”

The Marshall Islands is chair of the Climate Vulnerable Forum, a grouping of 48 nations.

Ms Genevieve Jiva, coordinator for the Pacific Islands for the Climate Action Network, said at a separate venue: “It is very clear that climate change will impact us (islands) the first and the worst, despite the fact that we have done very little to cause this problem, and this has given us a sense of urgency and determination to lead. Even though we may be seen as small in the international arena, when we speak, we often speak with one voice.”

The climate talks in Katowice aim to agree a set of rules, or rulebook, that will allow the 2015 Paris Agreement – a framework for keeping global warming to well below 2 deg C – to go into force by 2020. The hope is that the rulebook will be agreed by the end of the week.

Under the Paris pact, nations are meant to ramp up their national plans, called nationally determined contributions, or NDCs, every five years. At COP24, there is great focus on the conference ending with a decision to urge nations to pledge greater ambition in the next set of action plans for 2020.

“Rather than empty promises here, we need a COP decision that will commit countries to increasing their ambition,” said Jennifer Morgan, executive director of Greenpeace International.

“That means phasing out coal, going to 100 per cent renewables. But they need to send a signal to the world that they are responding to this report and they will increase their ambition and sign it in 2020,” she said on Thursday, referring to the UN climate panel report.

Mr Nasheed, head of the Maldives delegation, said the UN talks process had achieved little in 24 years since the first annual climate meeting under the UN Framework Convention on Climate Change was held.

“We are still using the same old dinosaur language, still making the same tedious points. Perhaps now it is time to tell ourselves some hard truths. Carbon emissions keep rising, rising and rising and all we seem to be doing is talking, talking and talking. We are not winning the battle.”

“Half of the problem is that we are still begging the big polluters to stop polluting on ethical grounds. But they were not listening to us. They never were. So instead, rather than asking for (emissions) cuts, perhaps we should be demanding an increase in investments in clean energy,” he said of a possible way to shift global action on climate change.

“We should ask the big emitters to invest so much into clean energy they will stop investing in and using fossil fuels. We need to reframe what we are demanding. Let’s demand something positive rather than something negative.

“We have spent 24 years on the same language on the same views. I have a daughter who is 21 and we have not achieved anything.”

At the Marshall Islands event, Ms Morgan said that people were no longer waiting for global consensus.