The water park where an 11-year-old schoolgirl drowned has remained closed to visitors today as police continue their investigation into the tragedy.

Two security guards stood at the entrance to the Liquid Leisure theme park near Datchet, Berkshire this morning, with ‘closed’ signs plastered on the metal entrance gates.

More than 20 floral tributes with cards that read ‘To a beautiful little girl’ and ‘RIP Little Angel’ have been laid at the entrance to the park where Kyra Hill died after going missing while taking part in a Total Wipeout-style inflatable assault course at a friend’s birthday party on Saturday afternoon.

Parents and staff started screaming her name across Liquid Leisure as around 40 adults dived into the lake and lifeguards were forced to ask guests to lend them goggles to search under the inflatables. Her body was found two hours after friends reported her missing. 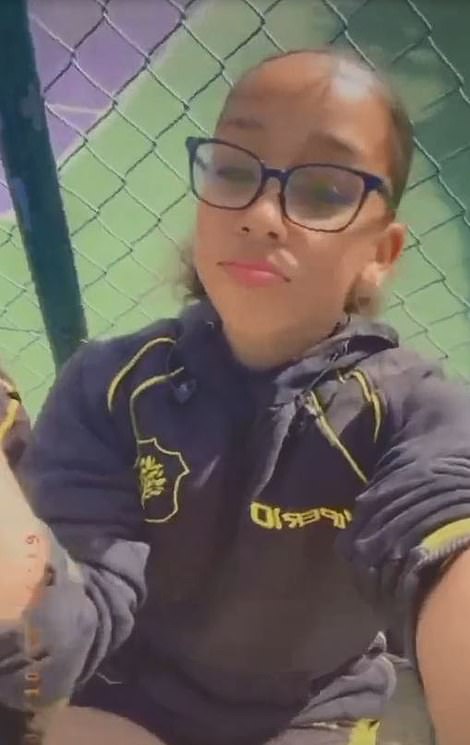 Pictures posted on social media showed Kyra in her black wetsuit posing with the birthday girl and their friends hours before the tragedy.

A 12-year-old friend said: ‘Kyra was so kind. She was really smart, she was at the top of all our classes. She liked to make people smile, she cared about people.’

The mother of one of her other classmates broke down in tears, saying: ‘She was such a sweet girl.’

On social media, a loved one wrote: ‘Your smile and hugs gave me life and you will never be forgotten.’

It is understood the mother of the birthday girl checked with all the parents that their children could swim before inviting them.

Liquid Leisure says it requires everyone to confirm that they are strong swimmers and provides life jackets for inflatables.

It came as Melissa Henson, a mother-of-two, said her own daughter had fallen between inflatables at the park, wedged in by her life jacket and with her head stuck in the water, ‘almost a year to the day’.

She told MailOnline: ‘I’m convinced she would have drowned if me and my husband weren’t watching. We brought it to management, who apologised and gave us a voucher to come back. I was watching the news and thinking: ‘This could have been my daughter.”

Kyra’s death is being treated as unexplained and a police investigation has been launched.

Sandy Kaur, who visited the water park on Sunday, said: ‘We go to the lakeside soft play area [part of the Liquid Leisure complex] regularly, but yesterday was the first time we were given wristbands because they said the park was ‘overbooked and expecting large numbers’.’

It comes as it has emerged that the water park is in the midst of a row with local planning chiefs who say parts of the site, including the aqua assault course, do not have currently have the correct planning permission.

The park, which the council says has permission for water-skiing and windsurfing and not as an ‘aqua theme park’, is currently awaiting a four-day public inquiry over the row. 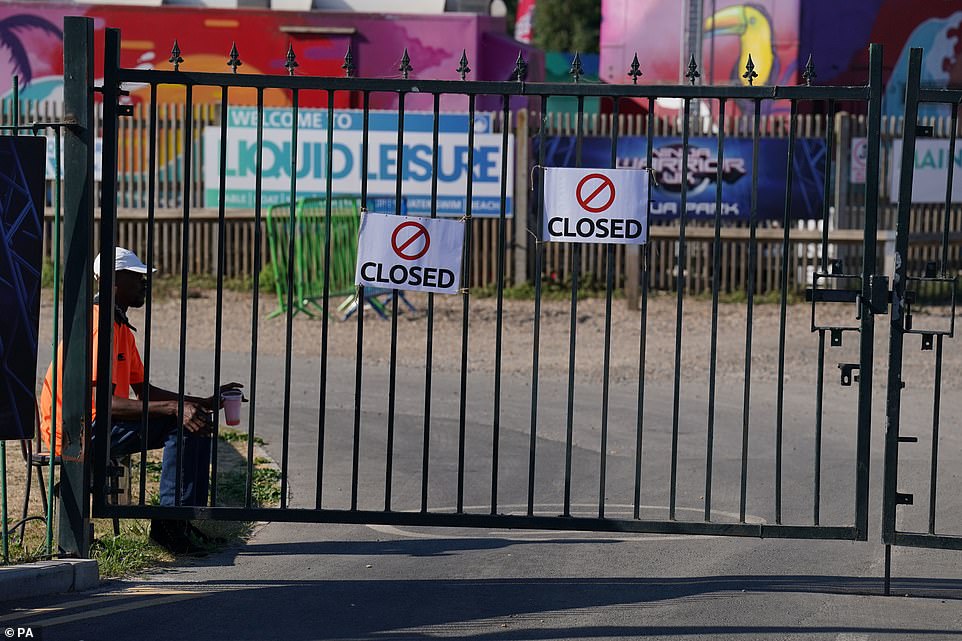 A security guard sits beside the locked gates at Liquid Leisure waterpark in Windsor, Berkshire today 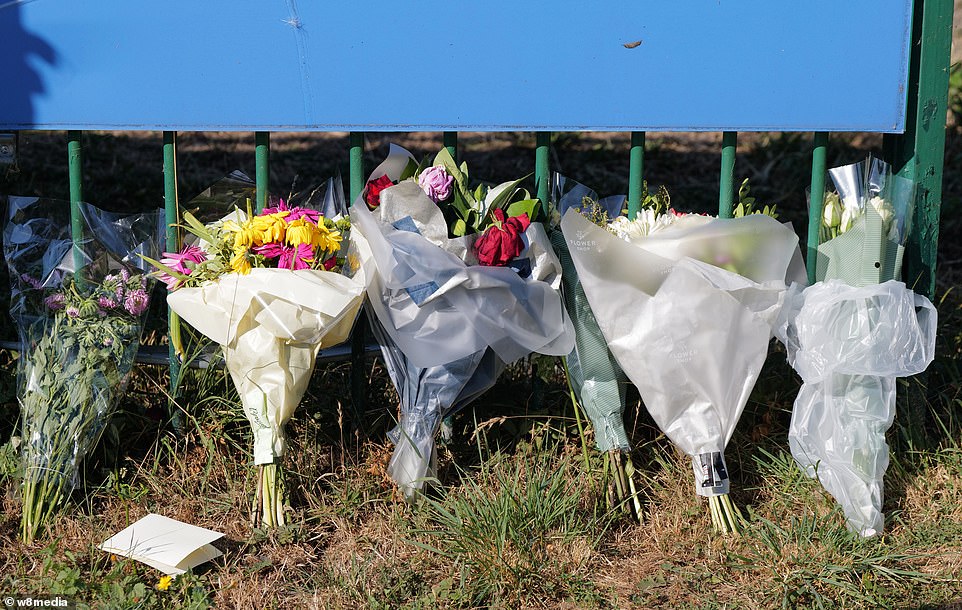 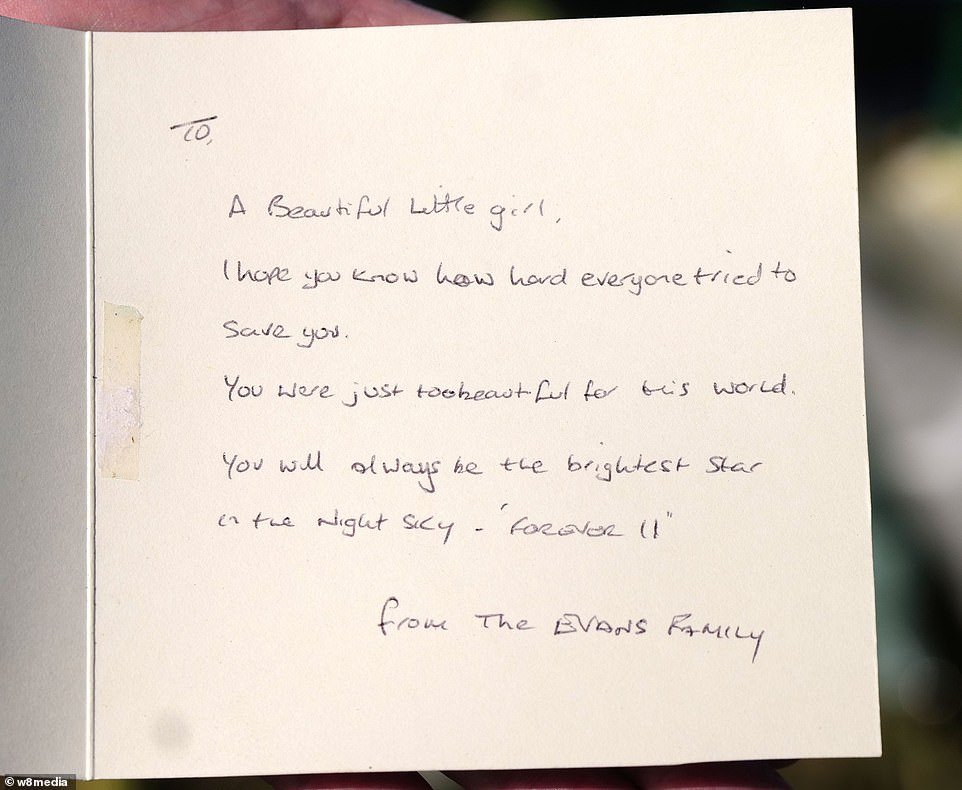 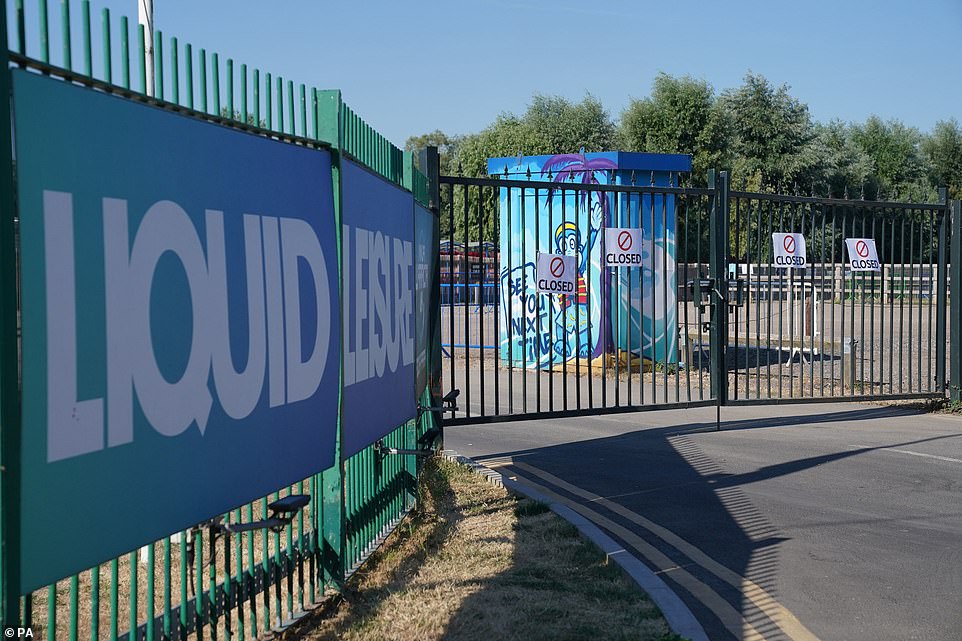 The locked gates at Liquid Leisure waterpark in Windsor, Berkshire this morning 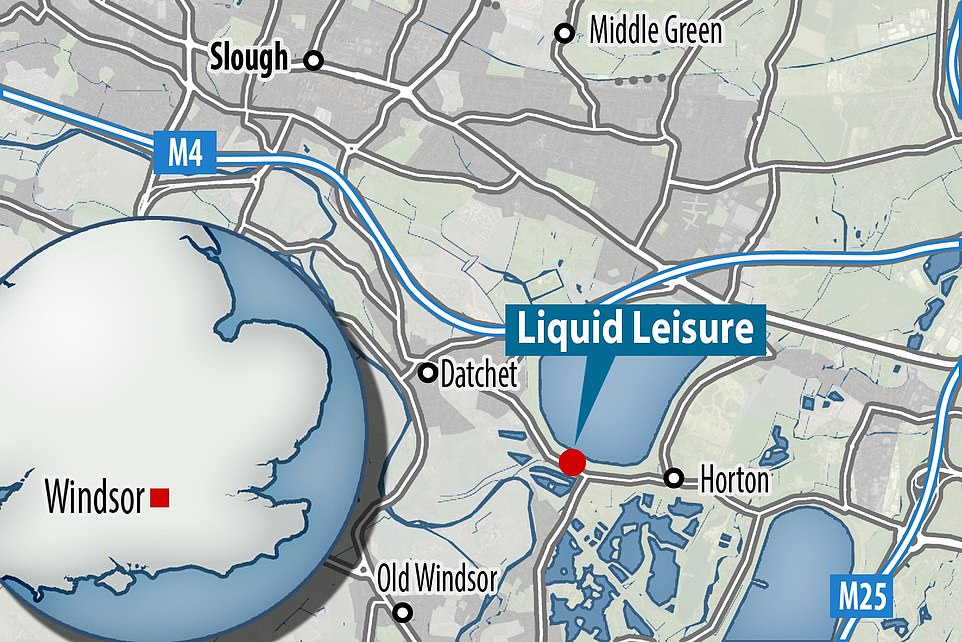 Bosses of the aqua park had earlier this year flagged that they were ‘deeply worried’ that it would have to shut – with 300 jobs at risk – due to a planning row with the council.

According to the Maidenhead Advertiser, Liquid Leisure was served with an enforcement notice in December 2020, requiring the park to remove most of the buildings on the site amid claims they had breached planning rules.

The council say this is because the addition of the water park and its use as a party venue had deviated from its planning permission for water-skiing and windsurfing.

The planning row was set to be subject to a four day inquiry by the planning inspectorate in March this year.

But it was postponed after the inspector, who was due to attend the water park as part of the inquiry, fell ill with Covid.

Stuart Marston, managing director of Liquid Leisure Windsor, said to the BBC’s Local Democracy Reporting Service ahead of the hearing that he feared the park could close.

He said: ‘Losing children’s activities that help build confidence in the water with their peers and reducing safe access to water for thousands of residents in the summer months really scares me.

‘With this action from the council, we will no longer be able to train much-needed open water lifeguards in Datchet.’

The inquiry, which could ultimately result in the Total Wipeout-style inflatable course being forced to shut, was due to take place in March. But it was postponed at short notice due to the inspector falling ill with Covid.

Meanwhile, witnesses yesterday recalled how the water park was thrown into ‘chaos’ on Saturday after the 11-year-old girl was reported missing.

A 41-year-old woman from South Buckinghamshire, who did not want to be named, was at the ‘busy’ water park with her teenage daughter on Saturday, having been several times before.

The woman said the situation was ‘an absolute tragedy’ for the family and friends of the girl while she and others at the park felt ‘shock’ and ‘helplessness’ at the scene.

She said: ‘My teenage daughter and her friend got in the water at 3pm for their session. I went off to get a drink and something to eat and then about 3.20pm asked another mum already occupying a bench if I could join her.

‘I started to try and make my daughter out because she was wearing a wetsuit and not many were, but because of the sheer numbers it was impossible so I just started to watch others.

‘I quickly noticed not everyone was wearing life jackets and I saw a young female lifeguard closest to where we were sat not paying attention and staring across the open water rather than the people she was meant to be looking at.’

The woman said she began to feel ‘uneasy’ about the ratio of lifeguards to visitors, but added: ‘I reasoned with myself that my daughter and friend had their life jackets on and the session would soon be over.’

She said soon afterwards, a lifeguard began to shout and told them to get off the inflatable course.

She continued: ‘We then realised a child was missing as two frantic women ran past screaming the child’s name.

‘There seem to be no plan of action with the LL staff. A few lifeguards jumped into the water and started searching in what appeared to be a very non-methodical way.

‘Another member of staff started asking other members of staff if they were life guard trained. No one appeared to be in charge and there was no co-ordination in managing the situation.

‘For the adults and children left on the riverside we didn’t know what to do, there was no communication and no evacuation procedure.

‘There is one small entrance and exit at LL and the emergency services arrived quickly and in huge numbers, they couldn’t have done more.

‘But because we weren’t told what to do and didn’t want to block their efforts of coming in to the park we just stood by and witnessed the search and rescue divers looking in the water.

‘Afterwards my daughter commented that she didn’t feel safe on the inflatable, there were areas which had deflated and gaps between obstacles which anyone could have easily slipped down leaving them underneath the inflatable.’ 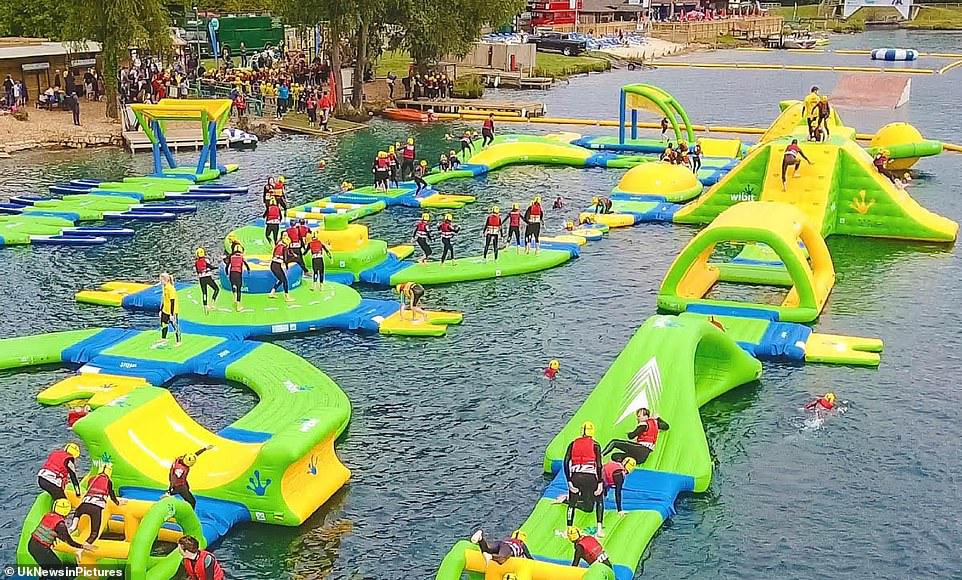 Lifeguards were reportedly running all over the obstacles and looking under them. Pictured: Library image 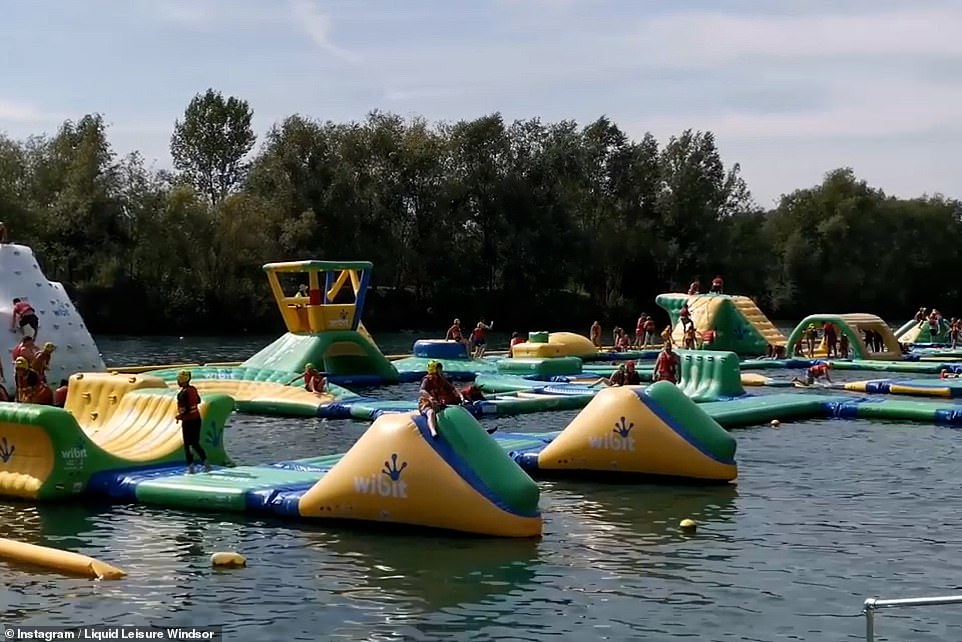 As many as 40 people, including members of the public, are believed to have dived into the water at Liquid Leisure 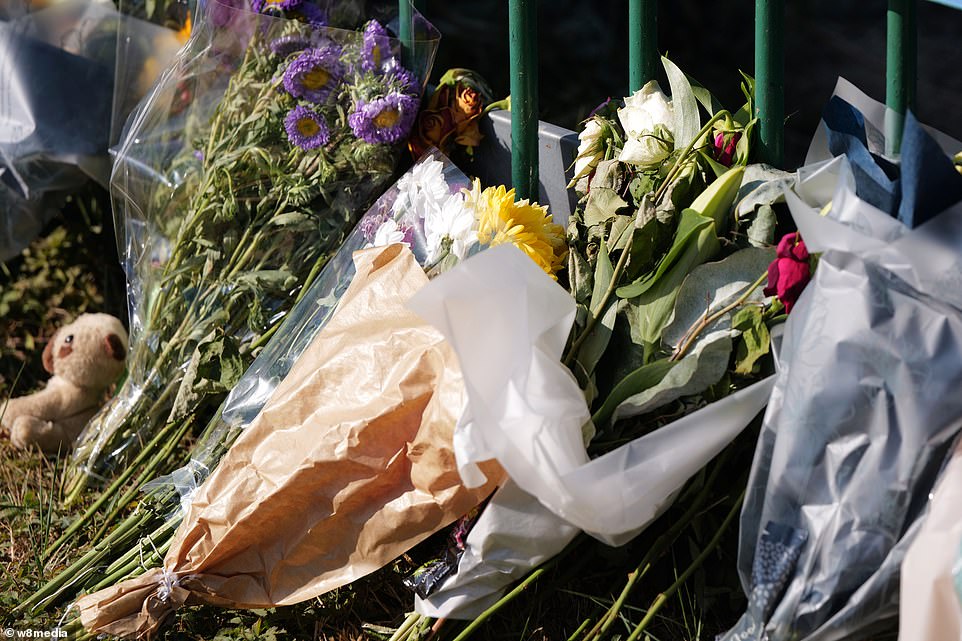 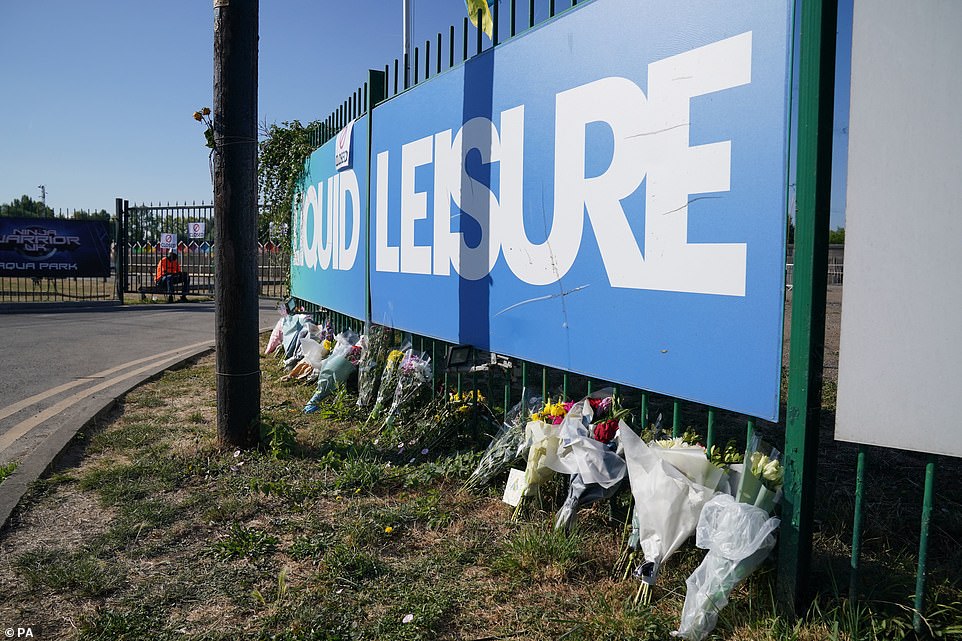 Another visitor also shared their concerns via Twitter. TV producer Neil Garrett said he visited with his family ‘a few weeks ago’ and had ‘issues’ with the amount of people allowed on the course at one time.

He wrote: ‘Took my kids to Liquid Leisure in Windsor a few weeks ago. Fair to say the place has some issues, the main one being how many people they allow on the floating obstacle course each session. Felt like 200-250 people. That’s a lot for the lifeguards to keep an eye on.

‘Second was some seriously antisocial behaviour by groups of lads. Everyone was ordered off at one point in our session because a group had pushed a lifeguard in. If yobs like this are occupying the lifeguards’ attention, how are they watching out for younger guests?

‘The overcrowding makes it very easy for parents to get separated from their kids. This is compounded by there being relatively few places to get back on the course if you fall in. Had to swim a long way to find one, meaning I’d be away from my 12-year-old for minutes at a time.’

He added: ‘All in all, this poor girl’s death at Liquid Leisure was a tragedy waiting to happen. Appalling.’

Another regular visitor, who witnessed Saturday’s tragic events, told MailOnline how they had been to the water park ‘several times’ before, but noticed it was ‘busier’ than usual.

She said: ‘My teenage daughter and her friend got in the water at 3pm for their session.

‘I started to try and make my daughter out because she was wearing a wetsuit and not many were, but because of the sheer numbers it was impossible so I just started to watch others.

‘I quickly noticed not everyone was wearing life jackets and I saw a young female lifeguard closest to where we were sat not paying attention and staring across the open water rather than the people she was meant to be looking at.

‘At this point I became uneasy, it didn’t feel safe and the number of young lifeguards to the ratio of people felt out of proportion.

‘I reasoned with myself that my daughter & friend had their life jackets on and the session would soon be over. Although I felt it was an accident waiting to happen.’