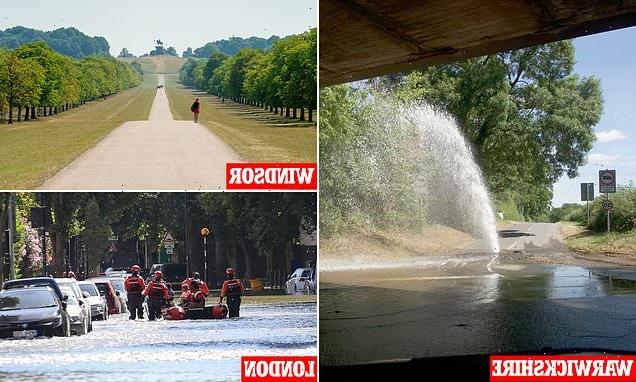 Water company bosses should be banned from trousering bonuses until leaky pipes are fixed, critics say

Water bosses should be banned from earning bonuses until they fix mains leaks that waste billions of litres of water daily, critics said last night.

As hosepipe bans are threatened around the country, burst pipes in London and Kent turned roads into rivers and left cars submerged yesterday.

During one of the hottest summers on record, furious residents watched as water cascaded through streets, while homes and businesses were left without supplies in Islington, north London. Homeowners were urged to move to higher ground as more than 70 firefighters battled rapidly rising water levels.

The ‘tsunami’ of water sparked anger at the poor performance of water companies that reward their bosses with fat salaries and bonuses while presiding over creaking infrastructure. 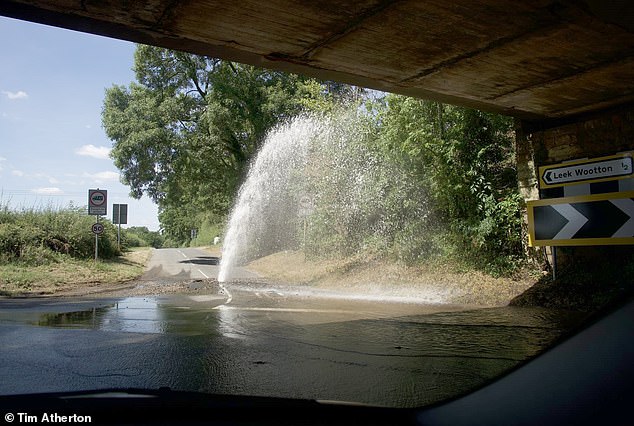 A burst water pipe in Warwickshire near Leek Wootton yesterday

It emerged that hosepipe bans could last until October after the Met Office warned that rivers may not return to healthy levels for months. Forecasters said temperatures were likely to drop after the weekend, but it would be a while before there was ‘meaningful rainfall’.

The Liberal Democrats and The Rivers Trust charity want the Government to ban new bonuses for water company executives until holes in leaking pipes are repaired. About one fifth of all drinking water produced washes away through cracked pipes and reservoirs – some 3.1billion litres of water every day in 2020/21, the regulator Ofwat said.

Water companies have only promised to halve leaks by 2050, despite predictions of a rise in droughts. Last month was the driest July in England since 1935, with just 35 per cent of its average rainfall for the month, while Wales only got 53 per cent.

Analysis of Companies House records by the Lib Dems shows executives at England’s water and sewage firms earned £48million in 2020 and 2021, including £27.6million in bonuses, benefits and incentives. 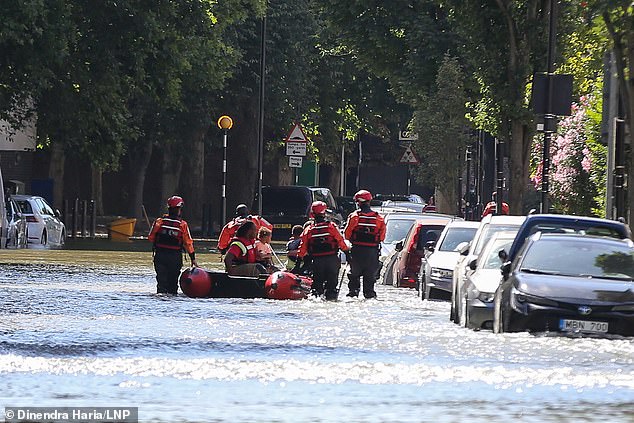 The scene at Hornsey Road and surrounding area including Harvist Estate and Sobell Leisure Centre in Islington, north London where firefighters were dealing with a burst water main that caused flooding of about 4 feet

Southern Water, which brought in a hosepipe ban on Friday, paid its executives £3.4million in bonuses, despite having pumped raw sewage into rivers and failed to fix leaking pipes.

Thames Water, which is threatening to bring in a hosepipe ban, has been caught up in a row about its failure to run a £250million desalination plant designed to deliver up to 100million litres of water a day during droughts. Its executives were paid around £5million despite the failure.

At the weekend, the firm, whose boss Sarah Bentley earned around £1.25million in pay and bonuses last year, asked Londoners to save water by taking shorter showers.

South East Water has brought in a hosepipe ban for some customers in Kent and Sussex and paid its bosses almost £646,000 in bonuses and benefits over the past two years.

Lib Dem rural affairs spokesman Tim Farron said: ‘It is outrageous that whilst millions of people suffer from hosepipe bans, water company execs reward themselves with bonuses despite not even bothering to fix leaks. What on earth have they done to deserve these bonuses?

‘Ministers are letting water firms get away with scandal after scandal. The public are sick of it. It is time someone stood up to these companies and demanded action. That should start with fixing these leaks, and then once and for all ending sewage pumping into waterways.’ 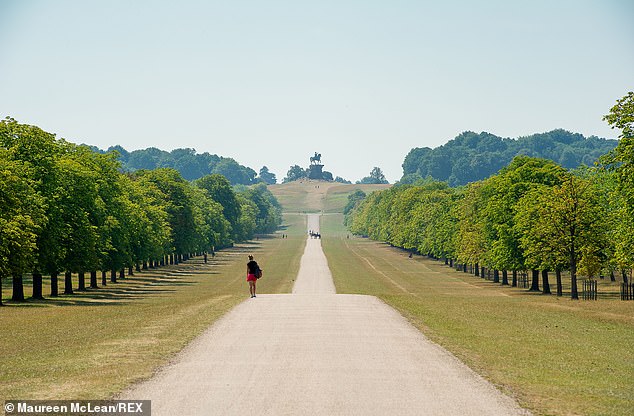 Christine Colvin, of The Rivers Trust, said promising to reduce leaks by only 50 per cent by 2050 was ‘ridiculously unambitious’.

She added: ‘What constitutes good performance by water companies?

‘They are really being rewarded for financial performance and their awards are not being linked to environmental performance.’

Around 50 properties were damaged and four people rescued after a 36in main burst in north London.

Emergency services were called to Islington just after 7am yesterday after a 4ft-deep flood washed through Hornsey Road. A member of staff at the Tollington Arms said: ‘Within minutes there was flooding like a tsunami.’

Singer turned water campaigner Feargal Sharkey said of the leak yesterday: ‘That is what decades of underinvestment, profiteering and mismanagement looks like.’ Residents in Winterton-on-Sea, Norfolk, complain that thousands of gallons of water are being wasted while a burst pipe remains unrepaired.

‘Morning, noon and night it’s going down the drain and no one is taking responsibility,’ said resident Colin Jones. ‘They want me to turn the tap off while I’m brushing my teeth, to save water. It’s a joke.’

Essex and Suffolk Water said the burst water pipe was owned by Great Yarmouth Council, adding: ‘We are working with the council as a contractor and aim to have this done as soon as possible. Unfortunately there has been a delay on this occasion and we’re very sorry.’

A leak also flooded a road at Leek Wootton near Warwick yesterday.

Sector body Water UK said the bonuses were linked to performance, and reflected ‘customer and environmental outcomes’, including performance on leaks, adding: ‘We’re seeing the lowest volume of leaks on record, with further steep reductions planned each year this decade.’