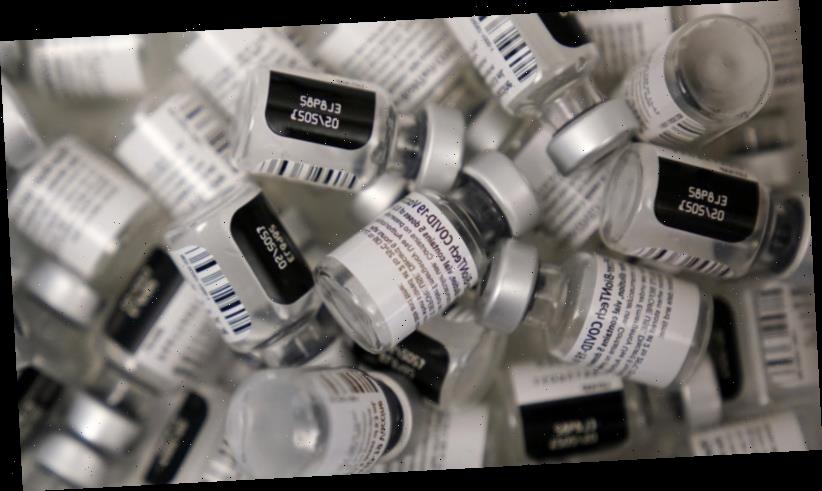 The new vaccine orders come as a combination antibody therapy shows it reduces the risk of COVID hospitalisation and death by 87 per cent. 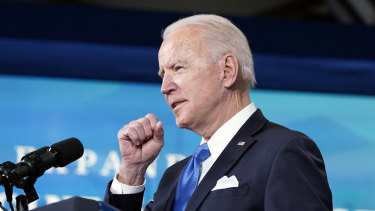 Biden made the announcement during an event at the White House on Wednesday with J&J Chairman and Chief Executive Officer Alex Gorsky and Merck Chairman and CEO Ken Frazier. The companies last week struck a collaboration to boost production of J&J’s recently authorised COVID-19 vaccine.

The US had previously ordered 100 million doses, which the company has said will be delivered before the end of June. J&J and the government will finalise the new order in coming weeks, officials said.

“I’m doing this because during this wartime effort we need maximum flexibility,” Biden said at the White House event, explaining the need for the vaccine supply. “A lot can happen, a lot can change, and we need to be prepared.”

The order is a sign that the US is continuing to stockpile doses as questions arise about which vaccine will be best for children.

No shots are authorised for use in people younger than 16, with studies underway on efficacy in older children and others expected to follow on younger ones. J&J will launch adolescent-focused clinical trials in coming weeks.

Since the pandemic began, the US has sustained 525,752 deaths from coronavirus and had 29,038,631 cases. The average daily cases in the past week have fallen by 57,342 or 3.36 per cent, according to data from Johns Hopkins University data.

Health officials also are sounding the alarm over emerging, more-contagious variants of the virus, which could blunt the impact of some inoculations or further spur the need for new rounds of shots.

Even as US vaccinations speed up, uncertainty remains. Rochelle Walensky, director of the U.S. Centres for Disease Control and Prevention, said in a briefing Wednesday that health officials are still unsure how long vaccine protection lasts. 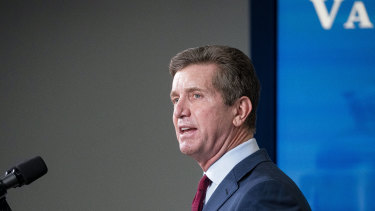 Alex Gorsky, chief executive officer of Johnson & Johnson, speaks during the announcement of the deal.Credit:Bloomberg

The new J&J doses will be available in the second half of the year, though specific timing will be part of negotiations to finalise the deal, said Biden coronavirus adviser Andy Slavitt.

The order follows last week’s announcement of the historic Merck and J&J partnership, which was facilitated by the Biden administration and will materially affect production of the single-shot, easily stored vaccine in the second half of the year.

“He’s doing this because in a wartime effort, which is what we consider this, we need maximum flexibility,” White House press secretary Jen Psaki said.

“We want to be oversupplied and over-prepared,” she said at Wednesday’s press briefing. “There’s also a chance that we’ll encounter an unexpected challenge on new need in our vaccination efforts, and we are preparing for just that.”

The order was previewed by other moves – the agreement between the companies, and a side deal between Merck and the US government under which it will overhaul some plants to boost vaccine production, including for J&J, and other medicines.

While Biden has credited his administration for facilitating the deal, the companies had been in talks before his inauguration, and those talks accelerated after January 25 when Merck abandoned its own vaccine program.

J&J’s shot was authorised about a month later, and the companies’ deal was announced by Biden days after that.

The US is aiding the partnership by investing in Merck’s facilities and using the Defence Production Act, a wartime power, to secure equipment, the official said. The production will eventually be distributed globally and boost global supply, the official said.

The ramp-up in vaccines in the US comes after drugmaker Eli Lilly said on Thursday (AEDT) its combination antibody therapy to fight COVID-19 reduced the risk of hospitalisation and death by 87 per cent in a study of more than 750 high-risk COVID-19 patients.

It is the second large, late-stage study to show that combination therapy of two antibodies, bamlanivimab and etesevimab, is effective at treating mild to moderate cases of COVID-19.

The previous study, which published data in January, used a higher dose of the drugs and reduced risk of hospitalisation by 70 per cent.

“I expect this data to continue to drive more utilisation [of the antibodies]” said Daniel Skovronsky, chief scientific officer at Eli Lilly.

“We have few other diseases where we have drugs that can offer this magnitude of benefit.”

US regulators authorised the combination therapy in February for use in COVID-19 patients 12 and over with a high risk of developing serious complications. European regulators greenlighted its use in March.

Half-naked boy, 15, found dead inside freezer after climbing in to ‘cool down’ at his gran’s house
World News