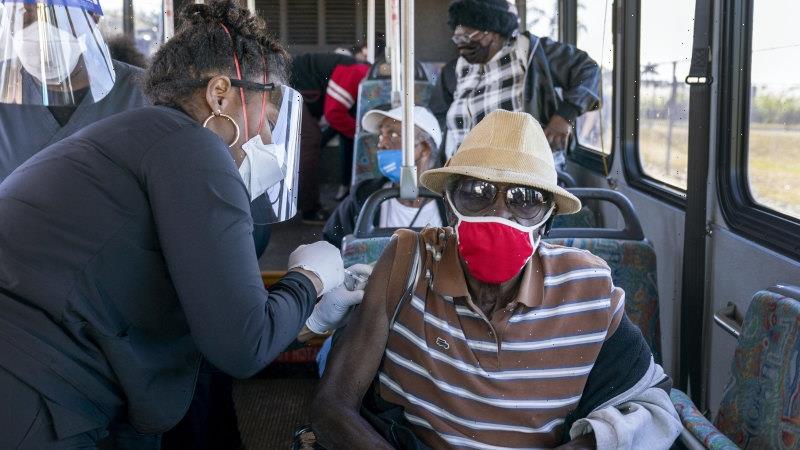 It has been more than 540 days since the federal government closed Australia’s international borders. It is for good reason the nation has been labelled by some as a hermit kingdom. But there is an end in sight. Earlier this month, Prime Minister Scott Morrison flagged that international borders would open once each state and territory had hit the 80 per cent fully vaccinated target and committed to start issuing international COVID-19 vaccination certificates from October.

While for some a chance to travel abroad will signal a return to some normality, it will also bring back into focus the battle many overseas nations are facing to contain COVID-19. From a global perspective, the pandemic is far from over. According to the World Health Organisation, during the week ending September 12, nearly 4 million new infections were reported and about 62,000 people died of COVID-19. 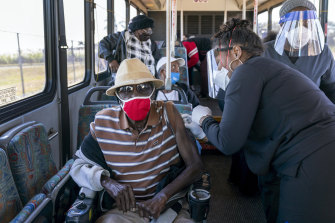 A senior receives a COVID-19 vaccine from a healthcare worker in Florida, where the virus is still spreading widely. Credit:AP

In a sign of the impact the more contagious Delta variant is having, the number of people dying is higher than during most of last year. The regional hotspots are the Americas (in particular the United States, Brazil and Mexico) and Europe. Vaccine hesitancy is a major factor. The US, which is one of few countries that has more than enough vaccine doses to inoculate everyone, has the highest death rate by a substantial margin.

More promising is Denmark, which has become the first European nation to have no COVID-19 restrictions in place. With more than 70 per cent of the total population fully vaccinated, Danish authorities believe they have the virus under control, recording about 500 daily cases and a reproduction rate of 0.7.

But Denmark is the exception to the rule. In Greece, vaccine hesitancy has been stronger, with only 55 per cent of people fully vaccinated. It has had to reintroduce some restrictions to combat a surge in cases and to increase pressure on those unwilling to get inoculated. Singapore, which has reached the 80 per cent double dose target, has had to delay easing restrictions and reimpose social distancing measures after cases also started to spike.

With relatively high vaccination rates not proving to be the silver bullet many were hoping in containing COVID-19, some nations, including Australia, are looking to give people booster shots to lift the efficacy rates of vaccines. Britain announced this week a plan to offer all those aged 50 and older a booster vaccine, while the Czech Republic, Germany, France, the US and Israel have already made commitments to offering some of their citizens boosters.

Such moves have infuriated some health experts, who argue that offering people in wealthy nations a third dose of vaccine while many poorer nations are unable to provide even one dose for much of their population is highly unethical and only prolonging the pandemic. They have a point.

Qantas has announced that its first commercial international flights in nearly two years are expected to take off from Sydney and Melbourne on December 18 to Los Angeles, Vancouver, London and Singapore. Many will see it as a reward for all the hard work of lockdowns and a sign that the worst of the pandemic is behind us.

A view of the world beyond our borders, however, shows how premature that belief is. Lockdowns will ease in Australia, but the lessons from overseas are evident that there is still a long way to go before COVID-19 no longer impedes our daily lives.