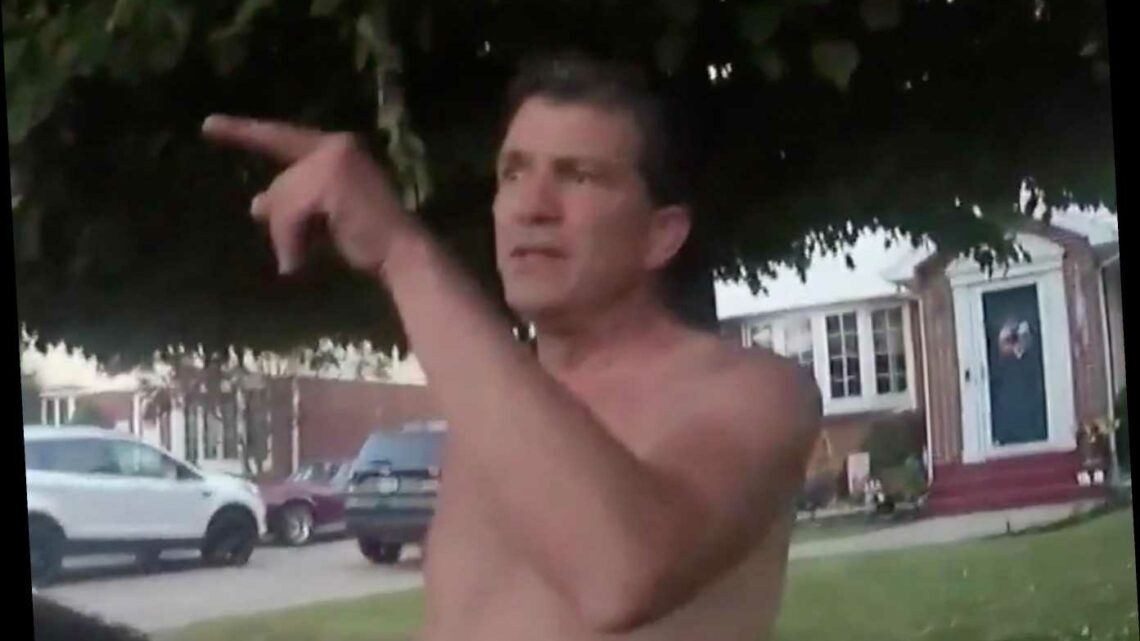 A shirtless New York state Supreme Court justice was caught on police body cameras shoving a Buffalo cop and dropping his connections to officials during an altercation this summer.

Justice Mark Grisanti and his wife, Maria, were handcuffed and placed in the back of police cruisers — though no charges were filed relating to the June 23 incident.

The body camera footage, obtained by WKBW through a Freedom of Information Law request, shows Grisanti pushing the cop and then mentioning he is friends with Mayor Byron Brown and that his son-in-law and daughter are both on the force, apparently seeking leniency.

The incident stemmed from a dispute the couple had with neighbors. Body camera clips aired by the station open to show cops speaking to the neighbors as Maria shouts at them from across the street.

“Maam, if you don’t stop yelling, this is gonna be a problem for you,” a Buffalo police officer responded.

At that point, the officer moves to arrest Maria. As he attempts to place her in handcuffs, Mark can be seen shouting at the officer as he comes up from behind and shoves him.

Another officer at the scene then grabs Mark by the arm, stating, “Keep your hands off of a cop.”

“You better get off my f—ing wife,” Mark Grisanti shouts. “My daughter and my son are both Buffalo police officers…I’ll call them right now.”

The former state Senator later offers what he calls “constructive criticism,” telling the cop who moved to arrest his wife that his use of force was uncalled for.

Another officer then steps in and starts berating Grisanti for his name-dropping.

“Let me give you some constructive criticism. You want to drop another copper’s name? You scream about how you…know the mayor? Why don’t you shut the f–k up!?” the cop says, before moving in to place him in handcuffs as he calls Mark an “old geezer.”

Erie County District Attorney John Flynn’s office announced several weeks after that it had reviewed the altercation and would not charge anyone involved.

Police Capt. Jeff Rinaldo told the station the officers’ decided not to charge Grisanti because he “didn’t tackle anyone, he didn’t punch him — he gave him, like, a shoulder shove.”

A spokesman for Mayor Byron W. Brown issued a statement to the station saying he wouldn’t get involved.

“It has been, and remains, my policy as Mayor not to interfere in any police investigation,” Brown said. “I have not spoken to the Buffalo Police Department, District Attorney Flynn, or Judge Grisanti regarding this matter. I believe that the District Attorney’s office is in the best position to determine the appropriate course of action.”

Grisanti, a Republican, lost his Senate seat in 2014 when attorney Kevin Stocker beat him in the Republican primary.

Gov. Andrew Cuomo nominated Grisanti to the Court of Claims in 2015.

In England, Shifting Virus Rules Close Doors One Day and Open Them the Next
World News