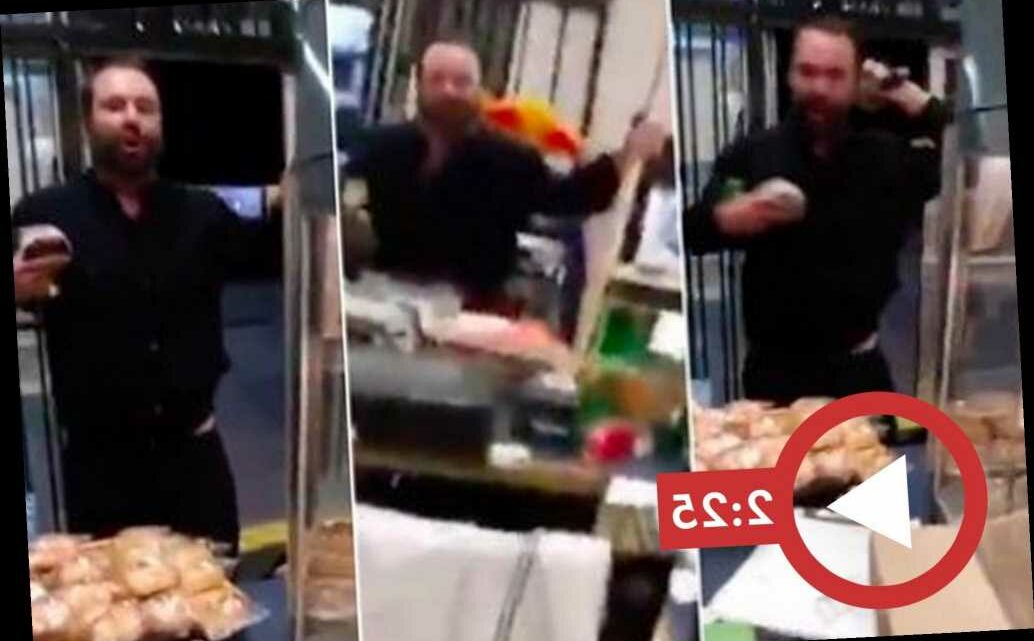 The hate-filled clip shows Brian Christopher Miller, 43, screaming at the owner of a Chevron gas station in southeast Portland, where he stopped on Friday to buy cigarettes, the victim’s son told KOIN.

“Is that how we do things in America, Afghan?” Miller asks the employee, identified by his son as a 68-year-old Afghan-American.

“Al Qaeda? Osama? Huh, is it? You scared? … I’ll grab that f–king camera right out of your f—ing hand, dude. I don’t like cameras.”

The video shows Miller then walking behind the counter and grabbing two packs of cigarettes while dropping $5 on the floor.

“You can owe me, you can owe me,” Miller tells the employee. “You call the f–king cops, I’m an easy man to find!”

Miller proceeds to hurl several items at the man, who continues filming the ongoing destruction inside.

Miller then gives the man the middle finger before suggesting he uploads the clip on YouTube to “tell ‘em what America has done with you unholy immigrants,” video shows.

“And I’ll f–king shoot you in the back,” Miller’s rant continues as he follows the gas station owner into a back room.

“Racism is still alive, even in liberal city Portland,” a caption from the original posting reads. “Dad is okay.”

Portland cops took him into custody outside the store and said he was most likely under the influence of alcohol or drugs at the time. The Chevron owner was not hurt, police said.

Miller has since been released on his own recognizance, online jail records show. Attempts to reach the Gresham resident were unsuccessful early Monday.

The victim’s son said he believes Miller is benefitting from “white privilege” by being sprung from custody just one day after he arrest.

“The guy was released less than 24 hours after it happened with just a slap on the wrist,” the victim’s son told KOIN in a statement. “If the roles were reversed, I think the outcome would have been very different.”

Prosecutors in Multnomah County, meanwhile, are looking into possibly filing bias crime charges against Miller in the attack, the station reported.

“We have been working with the Portland Police Bureau’s Bias Crime detective to gather all available police [reports] and evidence associated with this incident so the case can be reviewed by Monday’s expected appearance,” the statement read.

Conor McGregor back training ONE DAY after Dustin Poirier loss despite leaving UFC 257 on crutches, his trainer revealed