Victoria is emerging from a “shadow” lockdown in which people have limited their movements to levels seen only under stage-four restrictions in a bid to counter the spread of the Omicron outbreak.

Research from the University of Melbourne shows that when the state government opted against imposing a lockdown as COVID-19 infections rose in December and January, Victorians took matters into their own hands and significantly limited their walking, car and public transport trips. 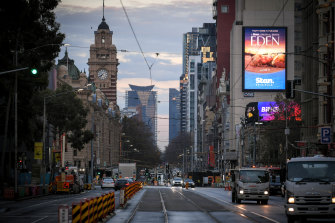 It is a trend epidemiologists say reflects how mandatory restrictions over nearly two years have shaped cultural norms, similar to how seatbelts laws introduced more than half a century ago in Victoria normalised the practice.

However, they argue this does not remove the need for mandatory interventions by governments.

In the first week of January, as infections reached a high of 51,000 (a combination of PCR tests and a backlog of thousands of rapid antigen tests), people limited their movements to levels just 10 per cent above what was seen during stage four lockdown, according to research by Jason Thompson, a University of Melbourne modeller.

But once cases began to fall, around January 11, they started making more trips, to about 60 to 70 per cent of pre-pandemic levels.

“It’s quite obvious that people are aware of what’s going on, and they make provisions to avoid places where or avoid situations where they think they might be likely to get infected … which is basically a sensible thing,” Professor Thompson, who has worked on Victorian government’s epidemic modelling, said.

“The difference is that these mobility changes happen after infections go up and the government imposes lockdowns to try to get ahead of an infection curve.” 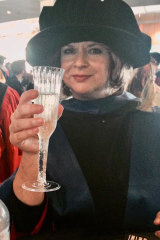 Prahran resident Erica Cervini at an event before the pandemic hit. She is now staying away from crowds.

The Age has been contacted by dozens of readers who have been in self-imposed isolation since Christmas or are being selective about the places they visit.

They include people with medical conditions, those with sick or eldery family members, pregnant women and people trying to avoid getting infected before events such as weddings and travel.

Some say they have been shopping online only, cancelling social engagements and holidays, avoiding the gym, wearing N95/P2 masks when they can get them and restricting outings to things like hairdressing and medical appointments.

Inner-city resident Erica Cervini, an academic who has a number of autoimmune conditions, said: “I still partly feel like I am in lockdown.”

She still walks her dog and goes to the supermarket, but otherwise avoids crowds, public transport and indoor venues such as cinemas.

“When numbers were lower, I would pop into the city and have a wander around and look at the department stores. I’m not popping into the city now.”

Victorian Chief Health Officer Brett Sutton predicted that Victoria had passed its peak in Omicron infections – a position supported by many epidemiologists, who still warn of a rise in cases as people return to work and school.

Professor Thompson said: “Until we have some intervention, whether that be an extremely effective vaccine or some other intervention that dampens that oscillation, we will continue to bounce around in this up and down pattern.”

Many people in self-imposed isolation cited as motivation not wanting to add to the strain on the health system and its capacity to provide care to those that need it.

“I think the risk is too high when you’re at mass events, where you are in very close proximity to multiple people at a time,” Dr Gaur said. “When I see patients, I’m wearing a N95 mask and feel very safe.”

Melbourne University epidemiologist Tony Blakely said people all over the world were showing behavioural changes in response to rising infections.

“People do hunker down without being told to,” Professor Blakely said. “If that hunkering down extends out to the wider community then you can slow down epidemic growth.”

He said while this showed mandatory health restrictions had shaped people’s behaviour, it was not a reason to remove government interventions altogether.

“There’s nothing about this that says mandatory is not required from time to time,” he said. “Mandatory is a good way of changing cultural norms, like seatbelts.”

University of Melbourne epidemiologist Nancy Baxter said it was not surprising that people were taking personal responsibility for their movements because they did not want to further overwhelm the health system.

“We’ve been well trained at what to do to slow down transmission and many people clicked into gear with the same things we had done through many other lockdowns,” Professor Baxter said.

But she said immunocompromised people had been completely left out of the discussion when restrictions were lifted and many were now being forced back into their own lockdowns to protect their health.

“What’s going to happen to these people?” she said. “So many people have underlying conditions and these are people’s family members.”

She said another challenge of a “shadow” lockdown was that not everyone would come out of it at the same time.

“You’re not going to see this rapid return to business as usual; it’s going to be slower than that,” she said.

Infectious disease expert Robert Booy said while he believed that those over 60 were dramatically curtailing their social circles because of the risk they could get severely ill with coronavirus, people under 30 continued to socialise together and make up the bulk of new cases.

“Young people don’t perceive they will get COVID severely – they know so many people who have had it mildly,” Professor Booy said. “And so a person’s personal experience is influencing their behaviour dramatically.”

Deakin University chair of epidemiology Catherine Bennett speculated the dip in people’s movements could have been slightly exaggerated over the holiday period when people were generally less mobile, but said cautiousness around the virus undoubtedly played a role too.

Professor Bennett said that while people were going further to curb their movements than what was required of them, the government would still play a crucial role in managing outbreaks in the future.