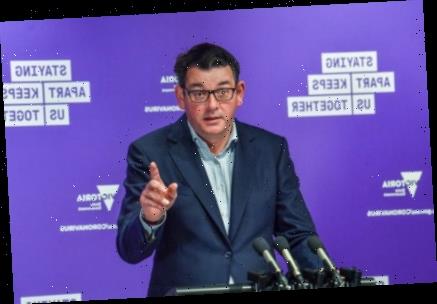 The number of new COVID-19 infections in Victoria has remained steady at 113, while deaths from the virus have declined to 12 in the latest daily figures to be reported by the Victorian health department.

The state recorded 113 new cases in the past 24 hours – the same number as yesterday – and the equal lowest since July 5, when 74 cases were reported.

Meanwhile, Professor Michael McCarthy from the University of Melbourne has said Victoria could record fewer than 100 daily COVID-19 cases in coming days.

He said he expects cases to be around 70 a day by next Friday, with an average of around 600 cases in total for the coming week. "That number is a bit of a guess," Professor McCarthy told radio station 3AW.

Numbers in Melbourne appear to have plateaued.Credit:Getty

He said he hopes that Victoria will be "well and truly" recording fewer than 50 cases a day by the end of stage four lockdown on September 13.

However, Professor McCarthy said it will be hard to get into single digits, because the exponential decline of the virus is much slower than exponential growth.

"It's very unfair isn't it … things get bad quickly, but things don't get good as fast," Professor McCarthy said.

"Once we get to those small numbers it's going to be very hard to get larger declines."