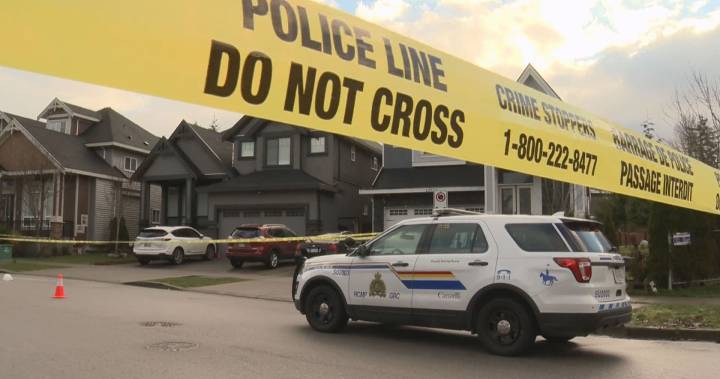 Homicide investigators have identified the victim of Friday’s fatal shooting in Surrey as a man with alleged gang associations stretching back nearly a decade.

A white, four-door Mercedes sedan was seen leaving the area shortly after the shooting.

About 10 minutes later, police were called to the area of Colebrook Road and King George Boulevard, where a burning car was located. Police believe it to be the same vehicle seen leaving the scene.

“We believe his murder was targeted and we also believe his death is linked to the ongoing gang conflict here int he Lower Mainland,” said IHIT Cpl. Frank Jang.

“One of the priorities for our investigators will be to develop the timeline, so the activities of Mr. Khakh in the last hours of life. This is crucial to our investigation, and if you can help us develop that timeline we urge you to come forward.”

Khakh was known to police and gang enforcement units, and had a criminal record that includes a break and enter conviction, and a weapons charge.

That weapons charge was in relation to a Vancouver police gang sweep in 2010 as a part of “Project Torrent,” targeting criminal organizations led by Manny Buttar and Bobby Gill.

“If he had any affiliations at the time of his death, that’s going to be important to us.”

Police are appealing for anyone with information or with dashcam video shot in the area Friday evening to contact investigators.

The IHIT information line can be reached at 1-877-551-IHIT (4448) or by email at [email protected], and anonymous tips can be left through Crime Stoppers.