A dispute over whether teachers should receive time off in lieu for every hour they spend on school camps is bound for the industrial umpire.

And as schools warn parents that such camps are no longer affordable and operators report a drop in bookings, children are urging school councils not to axe the rite of passage.

“We missed camps because of COVID and now we are going to miss it again,” said Ava Paine, 11, who unsuccessfully petitioned Essendon Primary School council not to cut back in 2023. 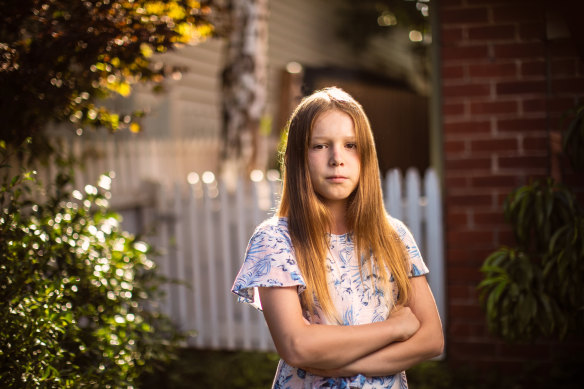 Ava Paine, 11, is one of four students at Essendon Primary School who tried to get the school council to continue the three-night beach or snow camp this year.Credit:Scott McNaughton

The Australian Education Union has taken the Andrews government and the Department of Education and Training to Fair Work Australia, accusing them of reneging on a hard-won improvement to working conditions for teachers, who were last year awarded hour-for-hour time in lieu for attending school camps.

But the department’s guidelines to schools, issued late last year, said staff on a school camp should receive time in lieu only if on duty or on call, not during “off-duty time”.

Emily Streitberg, principal of Guthridge Primary School in Sale, said that was farcical.

Streitberg said she would disregard the department’s unworkable guidelines for school camps this year and give staff their full time in lieu, though this would force the school to sacrifice other programs.

“The department for a long period of time have relied upon the free labour of teachers,” he said.

“We now have an arrangement where that time is addressed in a proper way, but it seems they don’t quite want to do it in the way that the agreement was made.”

The agreement made no reference to off-duty time when calculating time in lieu owed for attending camps.

The Department of Education and Training said it would be inappropriate to comment while the matter is before the Fair Work Commission.

The dispute is scheduled for a directions hearing in May.

Some schools have already begun cutting camps since the agreement was signed.

In October, one camp provider told this masthead that up to 20 per cent of schools had been deferring bookings or shortening them for 2023 and that schools that had booked camps every year for a decade were holding off until they had more certainty about how to manage the cost.

Andrew Knight, chief executive of Outdoors Victoria, said on Tuesday that camp operators estimated bookings were down by 10 to 20 per cent this year.

Gemima Weiler, managing director of Bindaree Outdoor Education, said many schools were holding off on booking camps in the hope that a solution would be found.

Others have indicated they would have shorter camps or even inquired about one-day outings.

“We’re seeing schools say, ‘we can’t afford it’, so they’re either not going to go for as long or not do it at all, which I think is devastating.”

Weiler said going on a school camp was a rite of passage for students. “We’ve really got to get this right because if we don’t, it might mean kids don’t go on camps any more, or only elite kids do because no one else can afford it.” 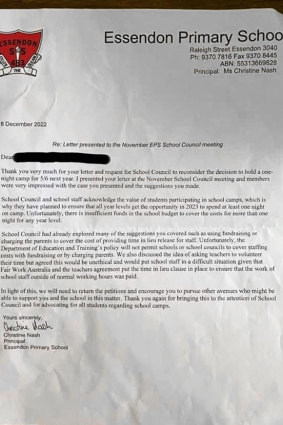 Essendon Primary School principal Christine Nash told students who petitioned the school that she had no option but to shorten camps.

Ava is one of four Year 5 and 6 students at Essendon Primary School who tried to get the school council to continue the three-night beach or snow camp this year.

Principal Christine Nash said the school had explored the suggestions put forward by the students, including fundraising and charging parents to cover the increased time in lieu costs, but the department’s policies did not permit this.

“School Council and school staff acknowledge the value of students participating in school camps … Unfortunately, there is insufficient funds in the school budget to cover the costs for more than one night for any year level,” she wrote to the students in response.

In the Victorian government schools agreement, signed early last year, staff won time in lieu for every hour worked beyond their normal working hours on activities such a camps, excursions and parent-teacher nights.

However, the agreement did not include extra funding for schools to cover the increased time in lieu. The new time in lieu provisions for government school staff at school camps took effect on January 1.