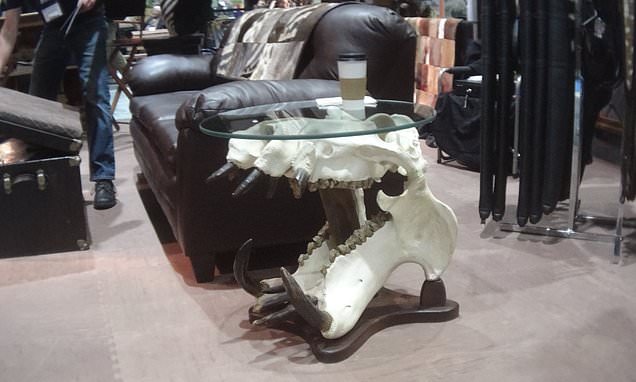 Undercover footage has revealed how hippo skull coffee tables, elephant skin furniture and stingray handbags were among wildlife items on sale at a safari convention in Nevada.

The practice of buying of selling elephant or hippo products is unlawful in Nevada unless the seller can satisfy certain conditions. These include proving with documentation that the item they are selling that contains such animal parts is an antique and at least 100 years old. 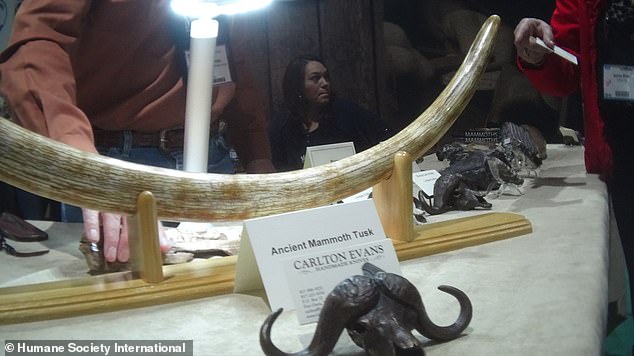 Carlton Evans Handmade Knives of TX booth at the SCI show 2019, selling products made from mammoth teeth and mammoth ivory

The same applies to music instruments that must have ‘de minimus’ – or, minimal – quantity of animal product, and the seller must prove its provenance and that it was legally acquired.

This also applies to weapons and other objects and the provenance and legal acquisition must always be proved according to Nevada law.

Investigators also claimed they found that canned lion hunts – in which customers can pay to shoot a captive-bred African lion in an enclosed area from which it cannot escape-  were easily available for purchase in Reno last week.

SCI, one of the world’s largest trophy hunting advocacy groups, banned the sale of such hunts at its conventions as of February 4, 2018. 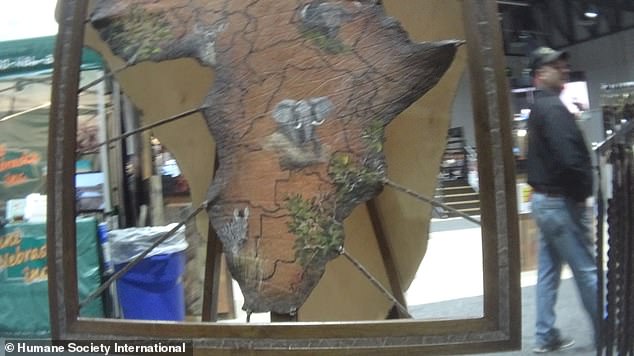 Artist Debra Cooper paints wildlife scenes onto elephant skin and ears, her works are for sale at the SCI show 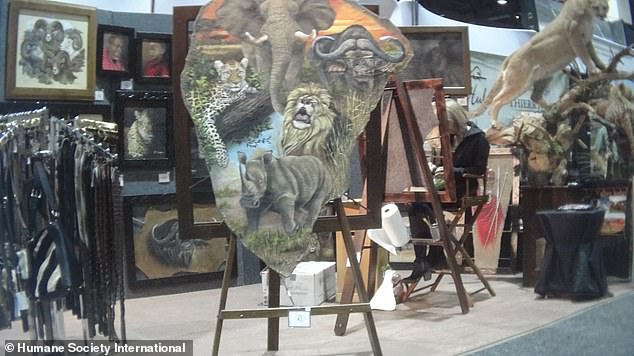 Artist Debra Cooper (painting in the background) paints wildlife scenes onto elephant skin and ears, her works are for sale at the SCI show

Kitty Block, acting president and CEO of the Humane Society of the United States and president of Humane Society International, said: ‘The world’s leading trophy hunting industry group is apparently promoting, enabling, and profiting from the illegal wildlife trade and unethical hunting practices.

‘Conservation laws and hunting ethics are thrown out the window by SCI when financial profit is involved, driving iconic wildlife such as African elephants toward extinction.

‘Making money off the opportunity to kill these animals for bragging rights is something that most people around the world find appalling. It’s an elitist hobby of the 1 percent, and there is no place for trophy hunting in today’s world.’

As of January 1, 2018, it is unlawful for any person within the state of Nevada to ‘purchase, sell, offer for sale or possess with intent to sell any item that it, wholly, or partially, made of an animal part or byproduct derived from a shark fin, a lion of the species Panthera leo or any species of elephant, rhinoceros, tiger, leopard, cheetah, jaguar, pangolin, sea turtle, ray, mammoth, narwhal, walrus or hippopotamus.’ 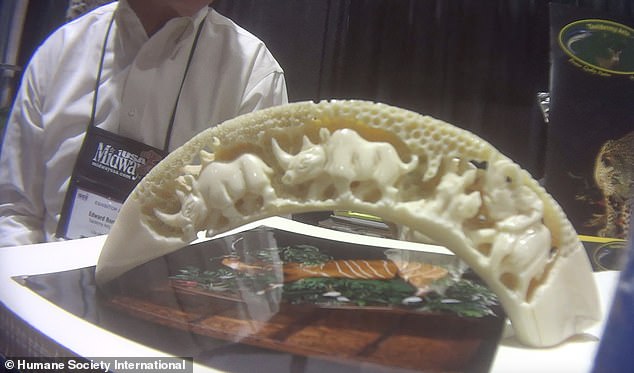 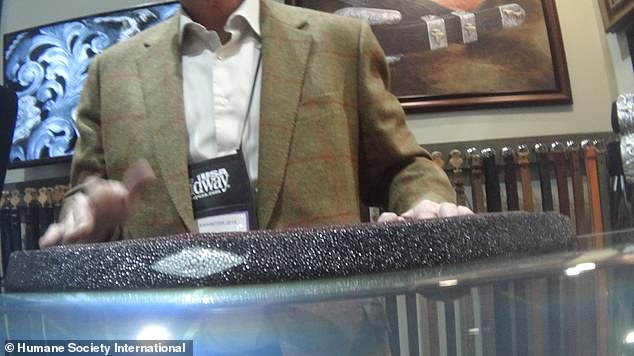 A rep with Clint Orms Silversmiths of Ingram, TX, selling stingray belts at the SCI show

The investigators found more than a dozen convention vendors offering for sale and possessing with intent to sell wildlife products that appear to violate this law.

Investigators say they also found ‘canned’ lion hunts for sale, in which customers can pay to shoot a captive-bred African lion in an enclosed area from which it cannot escape.

Canned hunts are internationally scorned, and SCI claims that it does not allow such lion hunts to be sold at its conventions. 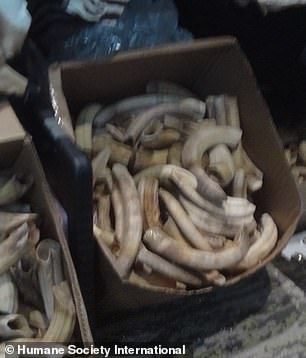 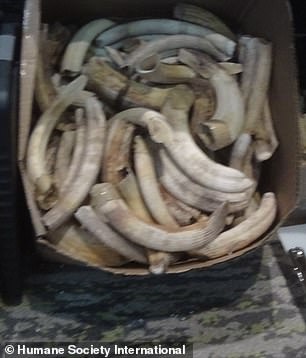 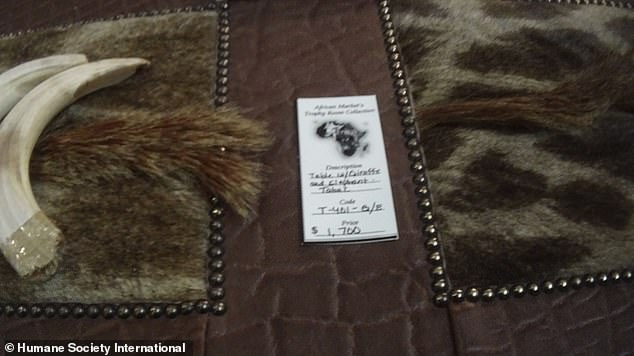 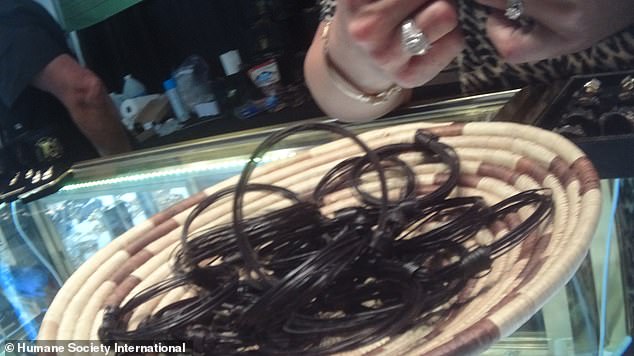 Elephant hair bracelets for sale by Safari Jewelry at the convention in Reno, Nevada

Yet vendors appeared to show investigators sample pictures of types of lions that may be killed, priced according to the age and size of the animal and his mane.

One conference attendee told the investigators that he and his children participated in a canned hunt, killing ‘their’ lion within 90 minutes, according to the Humane Society.

Canned hunt operators described baiting lions with meat, which they said they could do ahead of a trophy hunter’s arrival, to save time, investigators said. 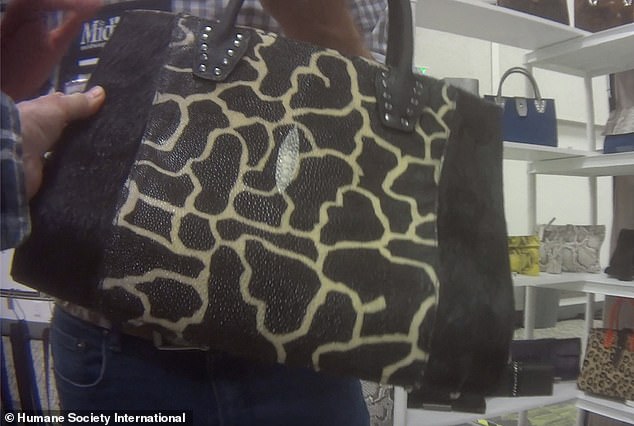 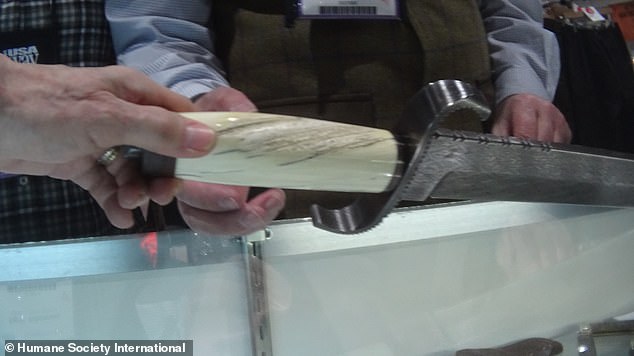 One person also allegedly told investigators if they wanted to kill a really big lion, he could order one specially.

The Humane Society of the United States and Humane Society International are releasing their investigation while the Dallas Safari Club convention is underway in Dallas, Texas, with some of the same vendors that were at the SCI convention last week.

While Texas does not have the same laws prohibiting the sale of wildlife products as Nevada, the Dallas Safari Club has stated that it too opposes captive bred lion hunting. 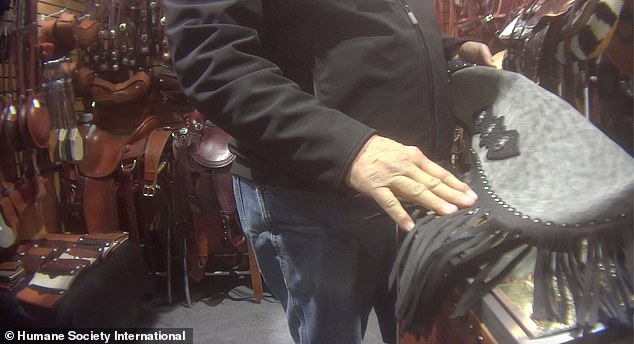 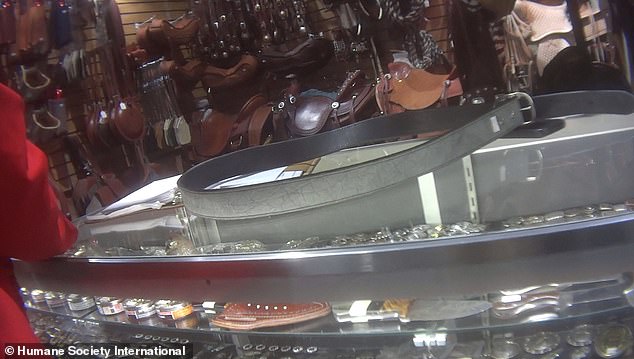 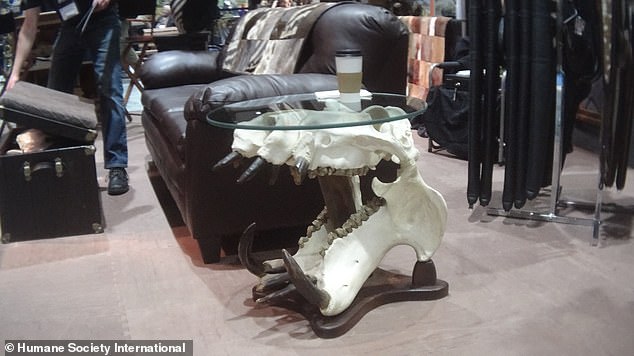 A sample hippo skull table is displayed for custom ordering at the Scottville, Michigan-based booth for Legends Taxidermy, at the Safari Club International 2019 convention in Reno, NV

At least six exhibitors selling canned lion hunts at the SCI convention are also at the DSC convention.

The Humane Society of the United States and Humane Society International submitted its findings in writing to the Nevada Department of Wildlife on January 10, requesting investigation and enforcement of Nevada law.

MailOnline has contacted the Safari Club International for comment. 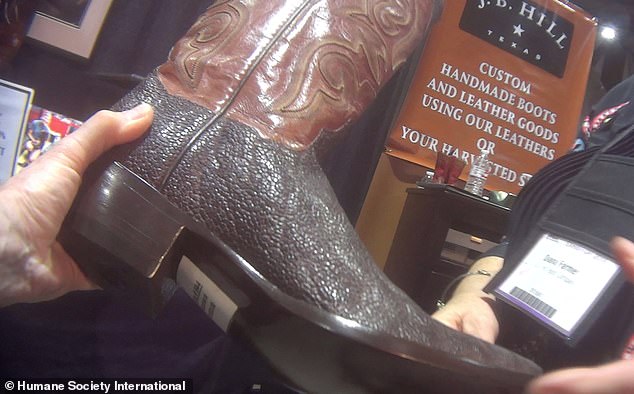 Stingray boots available for sale at the J.B Hill stall at the controversial convention 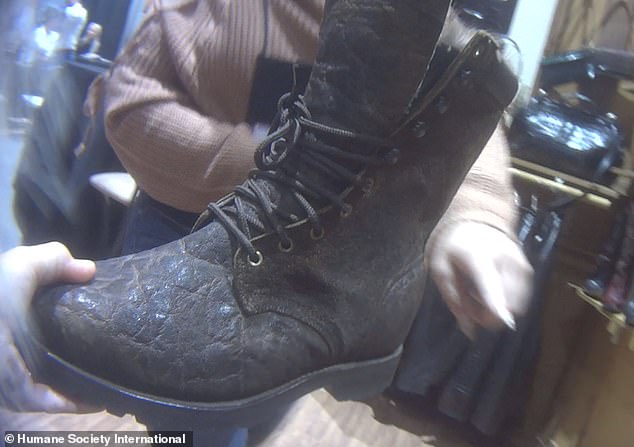 The Humane Society of the United States and Humane Society International submitted its findings in writing to the Nevada Department of Wildlife, elephant and beaver boots shown 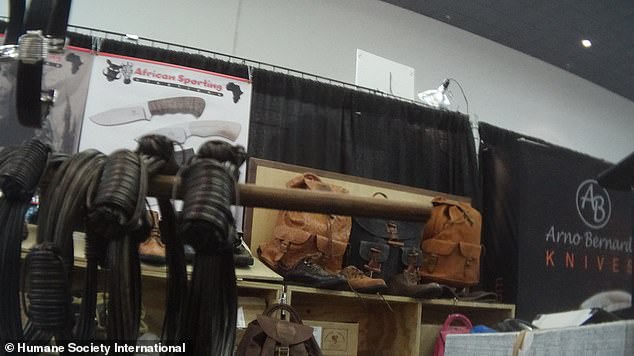 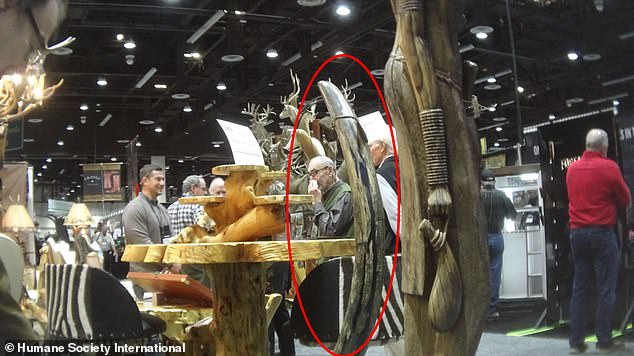