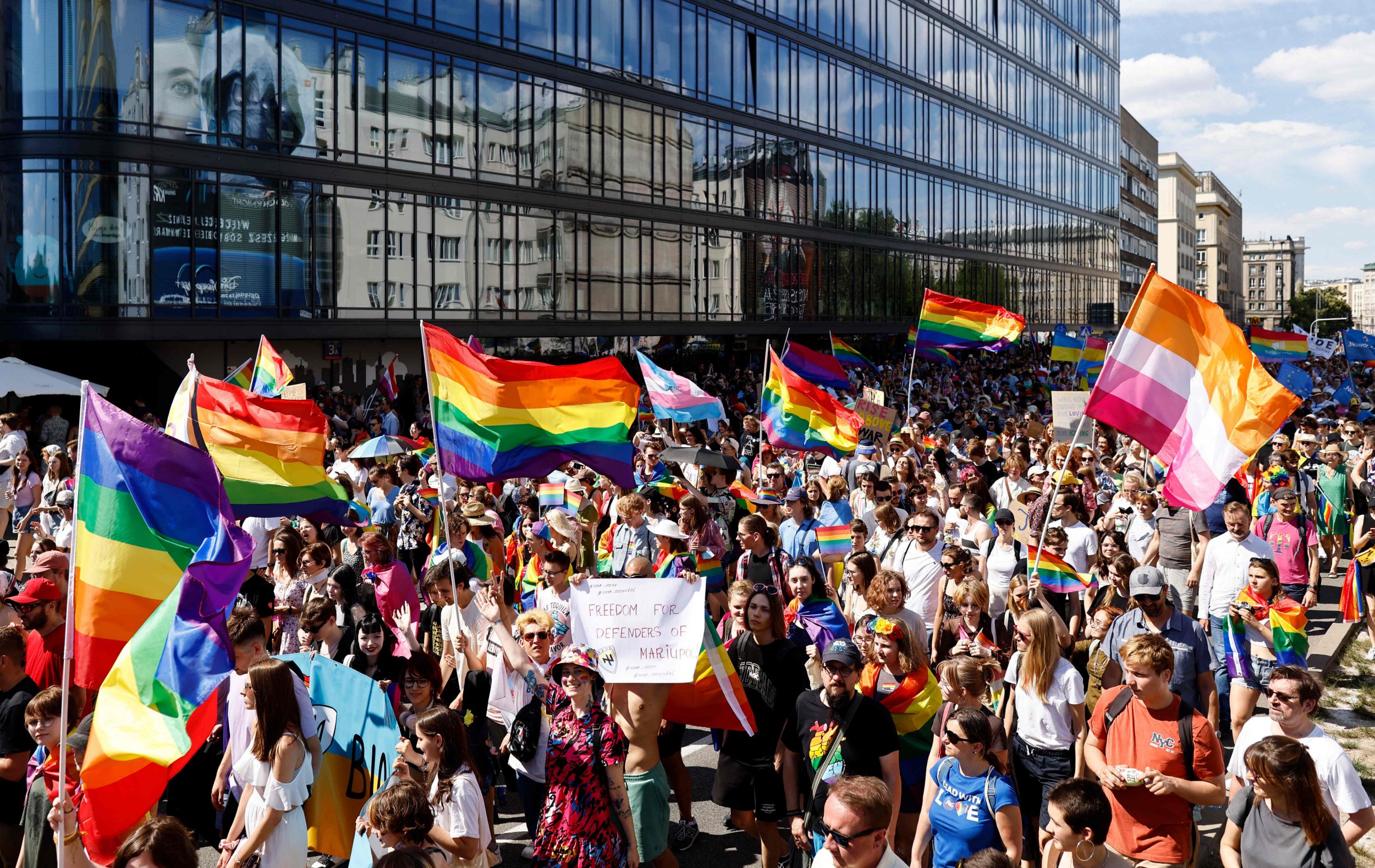 Every one of the hundreds of Ukrainians who joined Warsaw Pride had their own war story.

The Polish capital’s population has swelled with people fleeing the war over the border to the east, some with little prospect of returning.

Many of them joined the LGBTQ+ march held in the city centre, an annual event which was re-tooled as part celebration, part anti-war protest in recognition of the brutal conflict raging just a few hours away.

The blue and yellow of the Ukrainian flag was waved among the sea of rainbow colours filling the city streets and the day began with a chant of ‘Slava Ukraini’, the rallying cry of the independence movement.

Kyiv Pride’s director Lenny Emson implored the crowd to ‘march for us, show your solidarity’ and to ‘share our pain’.

Pieces of Warsaw’s scattered Ukrainian community found each other in the vast crowd, walking through the streets of their temporary home, a city which they are depthlessly grateful too but also dream of leaving.

Marisya Dranomyrova, 21, is draped in her flag. She says: ‘I left on February 13 before the war started because we knew something was going on.

‘I’m going home in two weeks, I’m so homesick. There’s no bombing in Kyiv now but I know that in a couple of months there could be again.

‘But I’m just too homesick. This a common thing among Ukrainians, many have returned home because of it.

‘I will be one of them too soon and I’m excited about it. I know I will be scared but being safe is nothing without home.’

Some carried placards to raise awareness of the plight of the fighters captured while defending the Azovstal steel plant.

Mariupol’s defenders held out until the bitter end while the rest of the ruined city fell under the control of Kremlin troops. In just a few days, they face execution.

Anna Ariabinska carries hers above her head for the TV cameras and journalists to see.

She said: ‘Today is an opportunity to tell the world about them and raise awareness.

‘The father of my children was living Mariupol when war broke out, he has been deported to the Russian Federation.’

Despite the horror, she is hopeful. Asked if she thinks she or her family will be able to go to the captured city again, she responds: ‘Of course.’

Maryna Muzychenko is from Zhytomyr. Hours before she hit the streets of Warsaw with a sign dedicated to the Azovstal fighters, 24 missiles were fired on her hometown.

Her family, she says, are safe but fear pervades the home she has been forced to leave.

The 24-year-old said: ‘Everyone is scared, there are so many explosions. It’s so unfair, I want justice, I can’t stand it anymore people are constantly nervous.’

Yevhenila Kachanova, 27, told Metro.co.uk: ‘On February 24, I picked up my bags and left Kyiv. I went home two weeks ago and the ghosts of war are still everywhere.

‘It’s in the atmosphere, it’s all anyone talks about. It’s not fear – it’s anger and wanting to fight what is happening.

’More than a dozen of Ukraine’s LGBTQ+ organisations were present in Warsaw, forbidden from gathering in their home country because of the strict martial law still in place.

Tamara Khrustalova, from the support group Insight, was among them. She said: ‘I left Kyiv for Lviv and we can’t return yet, it is still dangerous. The was is not going to be over in a few weeks or months.’

She continued: ‘I think in times of war, the challenges for LGBTQ+ are much the same as before, they just become worse.

‘You can still be beaten or humiliated if you are openly gay. This is what we are here to fight for – a society where everyone is able to make their own choices.’

This year marks 50 years of Pride, so it seems only fitting that Metro.co.uk goes above and beyond in our ongoing LGBTQ+ support, through a wealth of content that not only celebrates all things Pride, but also share stories, take time to reflect and raises awareness for the community this Pride Month.

And we’ve got some great names on board to help us, too. From a list of famous guest editors taking over the site for a week that includes Rob Rinder, Nicola Adams, Peter Tatchell, Kimberly Hart-Simpson, John Whaite, Anna Richardson and Dr Ranj, we’ll also have the likes Sir Ian McKellen and Drag Race stars The Vivienne, Lawrence Chaney and Tia Kofi offering their insights.

During Pride Month, which runs from 1 – 30 June, Metro.co.uk will also be supporting Kyiv Pride, a Ukrainian charity forced to work harder than ever to protect the rights of the LGBTQ+ community during times of conflict, and youth homelessness charity AKT. To find out more about their work, and what you can do to support them, click here.