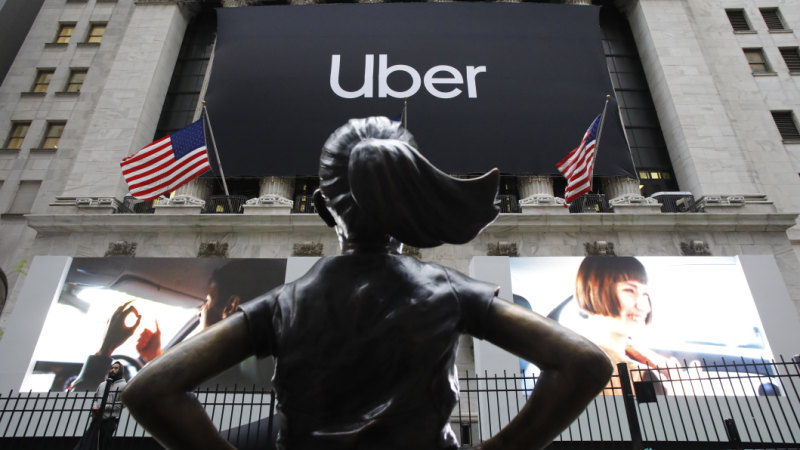 Uber stumbles badly out of the gates in disappointing public debut

New York: Over the past decade, Uber changed urban transportation, disrupted entrenched taxi industries, defied regulators the world over and beat back questions about how it was altering the nature of work.

On Friday, it was tamed by Wall Street. 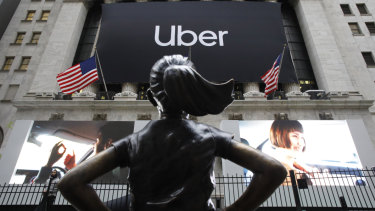 The statue of Defiant Girl stands in front of the New York Stock Exchange where Uber, the world’s largest ride-sharing service, held its initial public offering.Credit:AP

The ride-sharing giant's first day of trading on the New York Stock Exchange began trading at $US42 ($60) a share, down 6.7 per cent, and finished the day at $US41.57, well below the $US45 at which it sold shares to investors late on Thursday. By the end of its first day as a public company, Uber's value stood at $US76.5 billion — barely above the $US76 billion that private investors pegged it at in August.

Its stock tumble, highly unusual for carefully calibrated offerings, immediately raised questions about investor appetite for other money-losing tech startups that are poised to list their shares. It also pointed to miscalculations by the Wall Street banks that had taken Uber public and signified a disappointment for Dara Khosrowshahi, the chief executive, who was hired partly to steer the company through a successful sharemarket float.

But Khosrowshahi said he was thrilled to complete the float. "I think we came public on a tough day, and a tough week. But this is an incredibly resilient company," he said alluding to market volatility.

Few firms of Uber’s stature have stumbled so badly out of the gate as a public company. Other well-known tech brands, from Facebook to Snap to Alibaba to Lyft, all rose on their initial trades. Since 2000, only 18 companies valued at more than $US1 billion and listing on American exchanges had opened below their listing price. On average, tech stocks have jumped — or "popped", in Wall Street parlance — 41 per cent on their first day of trading over the past 24 years.

Uber raised $US8.1 billion from its initial public offering, but the company and its bankers appeared to have misjudged how much investors would embrace the stock, which closed at $US41.57. Last year, bankers said Uber could be valued at $US120 billion upon its IPO.

But that number declined in recent weeks amid questions about whether the deeply unprofitable company could make money. That was compounded by the performance of rival Lyft, which enjoyed a first-day surge when it went public in March but quickly fell below its initial price, and which posted a huge first-quarter loss this week.

For other tech companies moving toward the stock market — including the workplace collaboration company Slack and the fitness gear maker Peloton — Uber's IPO is a warning that fast-growing but unprofitable firms may not be snapped up by investors as they have been in the past.

Prince’s Paisley Park: there’s money to be made from grief

Steph Curry astounded the NBA world by scoring 33 points in 22 minutes to help the Warriors pull off a devastating, series-ending win over the Rockets
World News