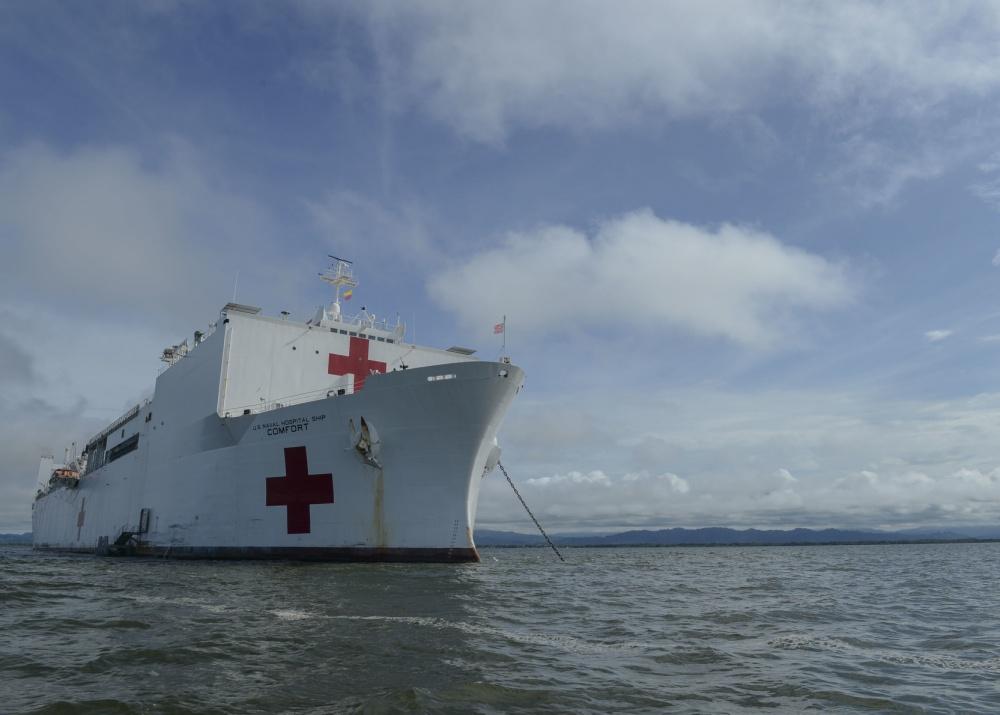 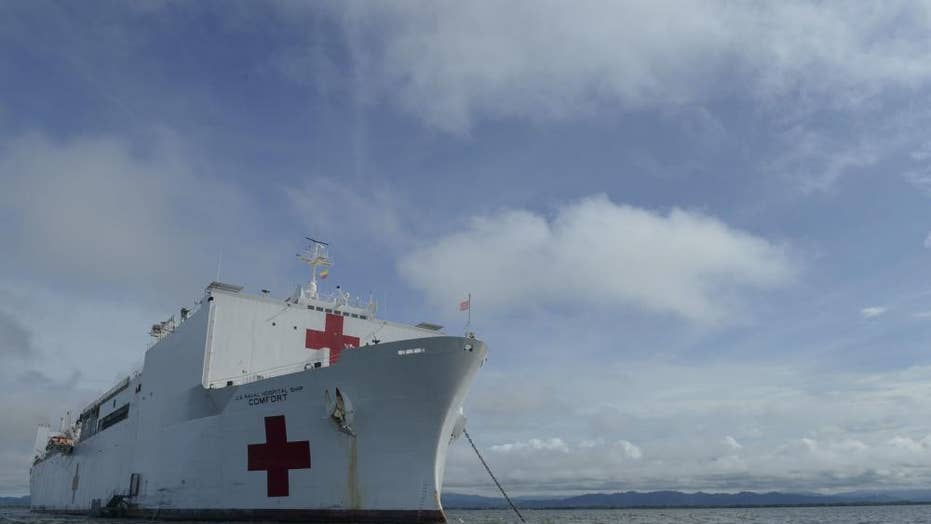 BOGOTA, Colombia – It’s a softer face of U.S. military service not often shown to the world: Sailors and medical personnel spending weeks on-end to treat those fleeing starvation, poverty, oppression, and fear – in some of the most desperate corners of the world.

And so while the Venezuelan government continues to deny and downplay the horrific humanitarian and economic crisis plaguing what was once the richest country in Latin America, a floating U.S. Navy hospital, USNS Comfort, is alleviating some of the burden on nations neighboring Venezuela

The assignment is “Enduring Promise 2018, which began when this ship departed the Navy base in Norfolk, Va., in early October. "We have treated approximately 20,000 patients,” Ensign Cody L. Keim, Public Affairs Officer, told Fox News en route to Honduras, amid the final stretch of the eleven-week mission. “If we follow the current trend of patient care, we expect to treat and serve just over 25,000 patients in total before we begin our voyage home.” 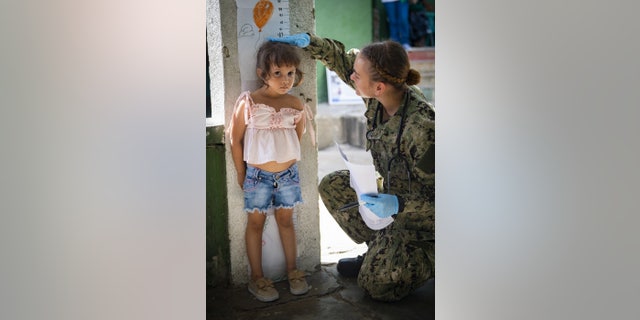 The team has so far provided humanitarian medical assistance to the partner nations of Ecuador, Peru, and Colombia – and soon Honduras. And while migrants receiving treatment are believed to be mostly from Venezuela and Colombia, the U.S. personnel don’t question patient's immigration status.

“It is our philosophy to provide quality care to those in need, therefore we do not ask about their migration status," Keim said. "We want every individual that comes to us seeking treatment to know that they will be treated to the same standard, with the highest level of respect, which we would provide to our own family members."

As a non-combatant vessel, the Comfort is without offensive heavy weapons. But it is equipped with everything from a dental suite to four x-ray machines to an optometric lab, and carries thousands of blood packs. Care is available on board, as well as land-based sites.

According to Lt. Thomas Driscoll, Director of Medical Operations and Planning (DMOP), while they have several advertised services – from general medicine, dental and optometry to women’s health, dermatology, radiology, and surgical services – it is often the psychological relief that is most valuable.

BURMA DOUBLES DOWN ON CLAIMS TO JUSTIFY TREATMENT OF ROHINGYA MINORITY 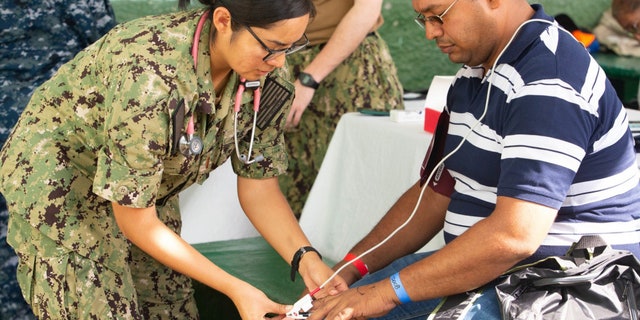 “Often it was the first time patients were able to cry and get relief from mental health concerns or worries they have had for family members that had traveled to be seen,” he noted. “We have found that migrants would utilize bus services or find transportation in order to travel several hours to days away.”

And for the most pressing cases, there are four helicopters on board, to transport patients. The service personnel at the medical sites also work in partnership with regional ministries of health, to identify and transport more serious medical conditions.

“Some of these conditions included untreated skin infections that had a high potential for sepsis, symptomatic congenital defects, newborn malnutrition/dehydration as well as symptomatic heart failure, stroke symptoms and myocardial infarction,” said Lt. Tatiana Crosby, Medical Site Nurse Manager. “The medical team quickly identified these conditions and ensured diagnosis and recommendations for care were translated and communicated with the ambulance services as well as the ministry of health representatives.”

Many hear about the services through word of mouth or a local news stor. And after years of suffering, the responses can be overwhelming.

“As patients would arrive at our side of the medical site after being triaged, the nurses, corpsmen and I would control patient flow and escort them throughout the rest of their visit at the med site,” explained Hospital Corpsman 1st Class Anthony Genuino, Leading Petty Officer for the Directorate of Nursing Services. “One patient’s reaction sticks with me as she cried as I helped her check out.  She gave me a big hug as she was crying on my chest.” 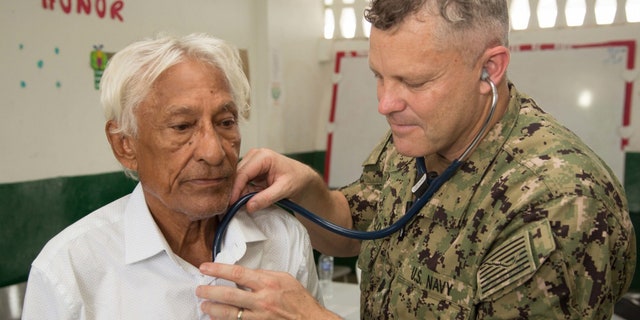 Some patients have even offered their own services in return. Driscoll told the story of a migrant who had traveled from the Venezuelan capital of Caracas.

“His name was Louis, and spoke wonderful English. After his treatment, he sought me out to ask if there was a way he could help the following day. Translation services are a service it seems we never have enough of,” Driscoll recounted. “We were able to utilize his help the next day to speak with the crowd to become more organized and identify needs of the population at our gates with his help. Speaking with Louis I found that just the ability to help his people in this way was very healing for his soul.”

The medical support mission to Central and South America is a component of U.S. Southern Command’s Enduring Promise initiative, a partnership that began in June 2007 with the goal to provide healthcare services to communities in need.

The United Nations has called the Venezuelan crisis the worst to ever strike Latin America. And the country’s healthcare system has collapsed over the past three years, with next to no medicines and care available, prompting an exodus of millions from all walks of life.

“I have noticed malnutrition and parasite treatment as the number one medical need for those who have identified as migrants from Venezuelan,” Driscoll noted.

But the Chavista government, led by Nicolas Maduro, has rebuffed international assertions that the country is in failure, and instead blame the economic hardships on U.S. sanctions and political opponents intent on waging “economic war.” Most aren’t buying that argument.

The Venezuelan government might have its suspicions about the role of the U.S. here. But it “absolutely a humanitarian mission. We are not sending soldiers, we are sending doctors,” Defense Secretary James Mattis stated in August, when announcing the Comfort’s deployment. “And it’s an effort to deal with the human cost of Maduro and his increasingly isolated regime.” 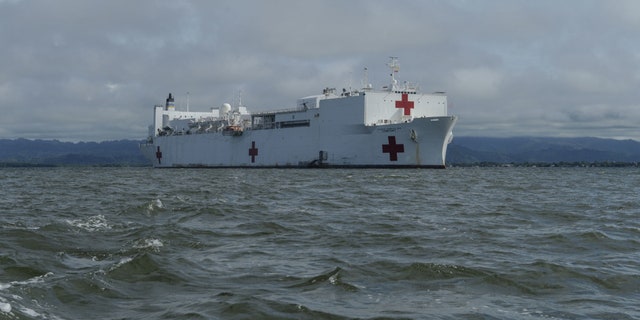 For many serving in the U.S. military, providing such assistance is an honor. “My biggest takeaway from this mission is the pride from knowing that the United States and our partners have such a strong relationship that we have the ability to respond quickly and help a large population in dire need,” Driscoll said. “After this mission, I have no doubt our partners would respond just as quick to the needs of Americans in the case tragedy on our shores.”

For the people being treated, it’s often the small moments that count.

“From a simple pair of glasses or a new walking cane to a more complex abdominal wall closure surgery, it was evident that our mission had a great impact on the lives,” Crosby added. “The gratitude from our patients transcended the language barriers as we received hugs, or strong handshakes and even handwritten letters of their appreciation. Everyone on-board will be able to return home with a feeling of pride and accomplishment that they were able to touch the lives of those we cared for and make a difference.”

And home just in time for Christmas. 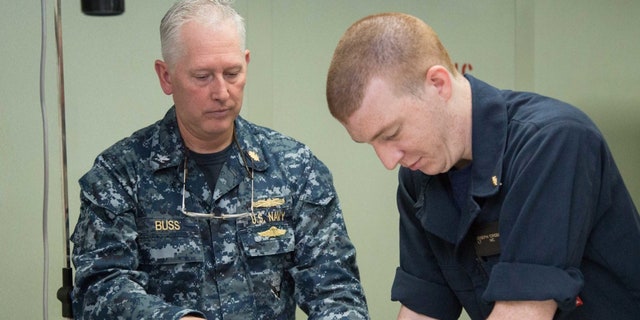