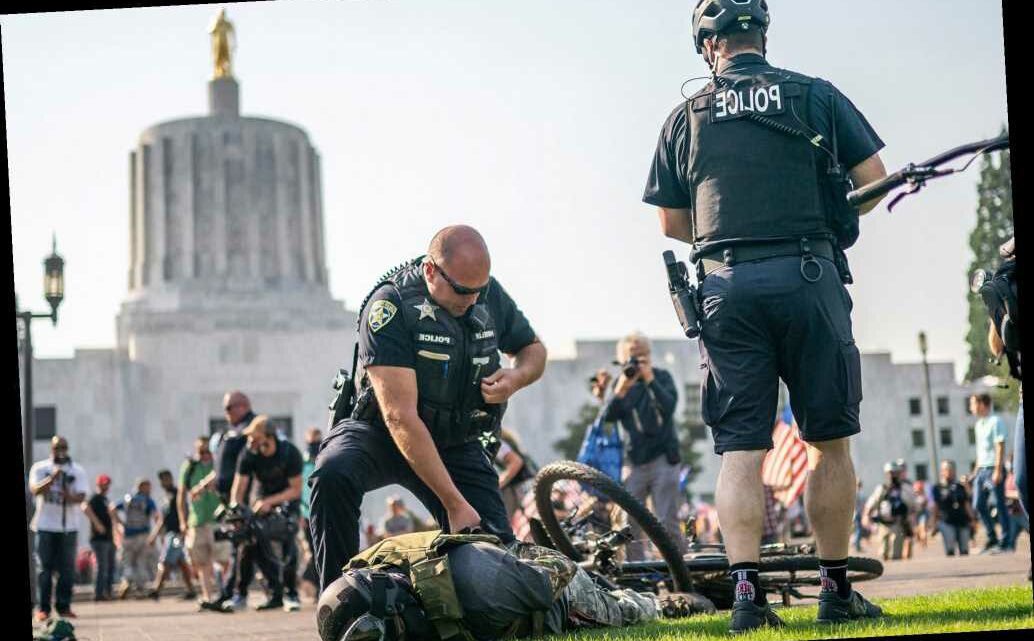 Chaos ensued Monday afternoon when more than 100 Trump supporters — including members of the all-male, alt-right group, the Proud Boys — arrived at the capitol building in Salem, about 45 miles south of Portland, in a caravan of vehicles.

The group, waving Trump 2020 signs and American flags — and some carrying weapons — clashed with about 20 Black Lives Matter protesters gathered there.

The rival demonstrators fired pepper spray at each other — with at least one Trump supporter beating a Black Lives Matter protester with a baseball bat, and another Trump supporter spraying a fire extinguisher.

A witness told Reuters that about a dozen Oregon State Police officers initially stood by as Trump supporters charged at and hit Black Lives Matter protesters. But they later tackled and arrested two people who had been punching Black Lives Matter demonstrators, the witness said.

State Police officers and the Salem Police Department responded to the scene across from the capitol when an “American Lives Matter Rally group” chased and pushed counter-protesters, a state police spokesman said in a statement.

Two men were arrested, charged with misdemeanor assault and subsequently released, according to the spokesman.

Monday marked the 102nd day that protests — often violent — have ensued in nearby Portland.

Portland police arrested more than 100 people during violent clashes over the weekend.

The majority — 59 — were arrested Saturday as officials declared a riot in which they said officers were hit with multiple firebombs, mortars and rocks.

Protests began in the city three days after George Floyd’s death in Minneapolis in May.