Trump strategy on COVID-19 continues to rely on miracles

In a potential preview of what their messaging will be during next week’s convention, the Republican presidential ticket is again insisting that the coronavirus will go away by a “miracle.”

During a Thursday night interview with Fox News’ Sean Hannity timed to coincide with the final night of the Democratic National Convention, President Trump said he hoped the pandemic was “nearing the final term.”

That was followed by a round of Friday morning interviews by Vice President Mike Pence. On CNN, Pence said “we think there’s a miracle around the corner” in the form of a coronavirus vaccine that could be available by the end of the year, calling it a “tribute to President Trump’s leadership.” This follows comments from Trump earlier this month predicting a vaccine could be ready by Election Day, and earlier this year when he alluded to the virus disappearing “like a miracle.”

This week Mike Lindell, a major Trump supporter who is widely known for appearing in commercials for his bedding company, has been promoting an untested plant extract called oleandrin as a “miracle” therapy for COVID-19, although botanists warn it can be extremely toxic. “This thing works — it’s the miracle of all time,” Lindell said in a contentious interview with CNN’s Anderson Cooper. Lindell is on the board of the company that produces the substance.

Trump has said the administration “will look at it.”

In March, televangelist Kenneth Copeland, a faith adviser to Trump’s 2016 campaign, invoked a different kind of miracle in a widely seen video in which he executed God’s judgment against the coronavirus, and pronounced it “finished.” 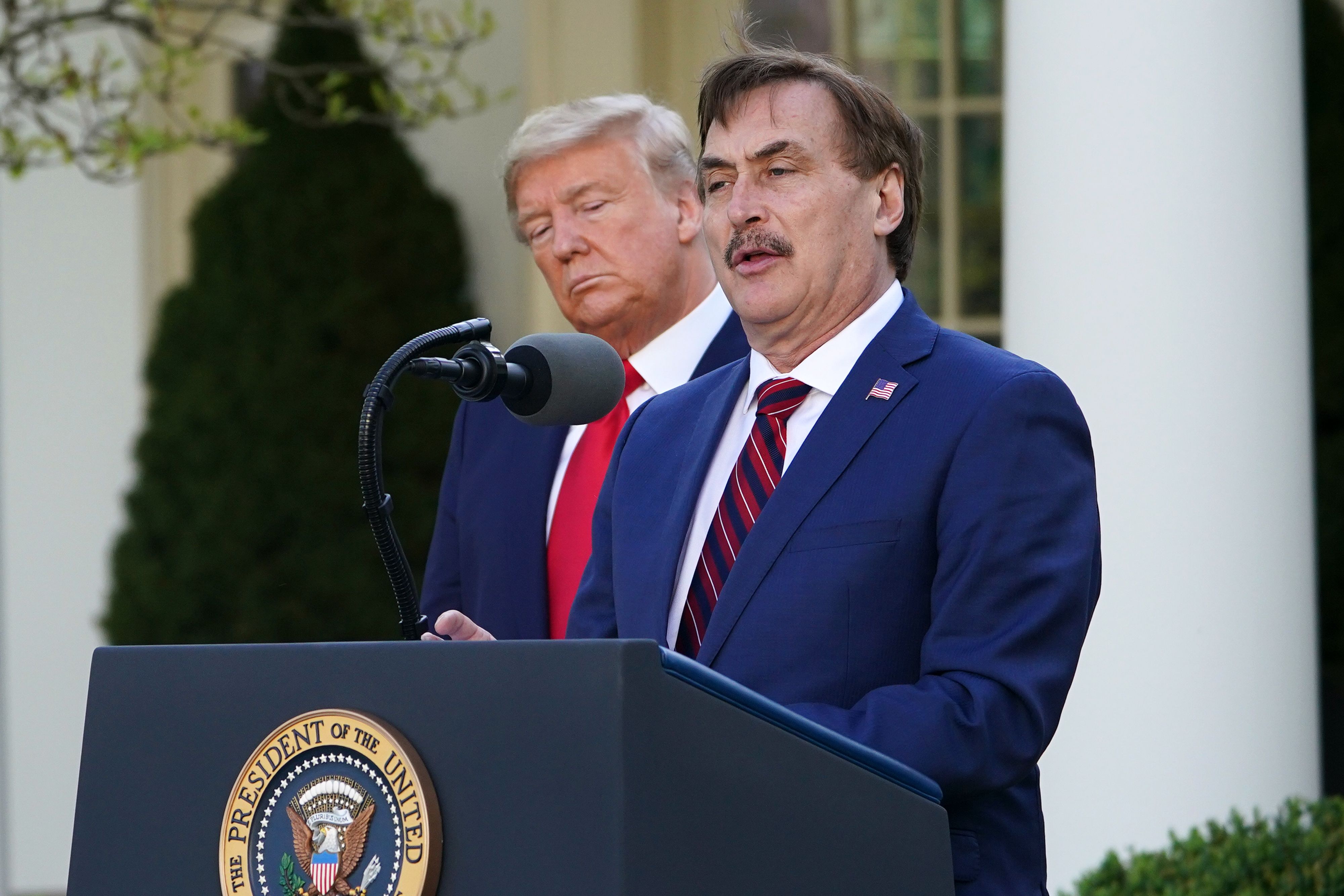 Infectious disease expert Dr. Anthony Fauci said in July that while millions of doses could be available by early 2021, it wouldn’t be widely available until several months into the new year. According to tracking by Johns Hopkins University, more than 174,000 Americans have died of COVID-19 out of more than 5.5 million confirmed infections, both numbers the most by far of any nation.

With the online Republican National Convention set to start on Monday, Trump and his team will confront again the question of why they were unable to safely hold the planned in-person convention in Charlotte, N.C., which was moved to Jacksonville, Fla., before it was essentially canceled altogether. Democrats spent much of their convention hammering the White House for its failed COVID-19 response.

“The tragedy that we face today is that it didn’t have to be this bad,” said Democratic nominee Joe Biden in his speech Thursday night. “The president keeps waiting around, looking for a miracle. Well, I have news for him: Mr. President, no miracle is coming.”

The comments from Trump and Pence continued a White House strategy of promising the coronavirus will go away without aggressive action to stop it, after a slow initial response and encouraging states to reopen businesses, sometimes against the advice of public health experts. 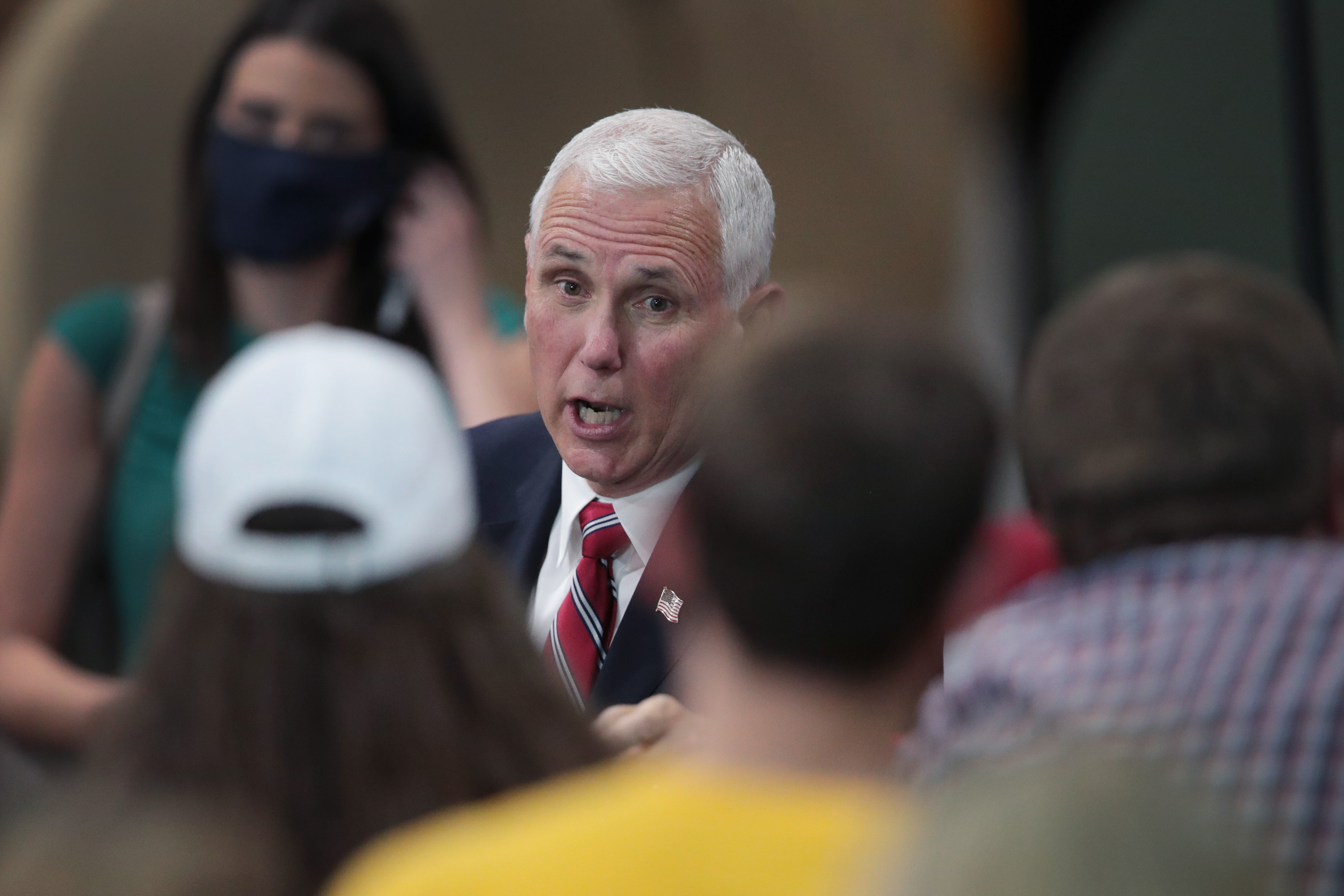 “I think we’re gonna be very good with the coronavirus,” Trump said in a July 1 interview with Fox Business. “I think that at some point that’s going to sort of just disappear, I hope.”

“You still believe so?” Trump was asked by the interviewer, as the death count for the virus in the country sat at over 128,000.

“I do, I do,” replied the president. “Yeah, sure, at some point — and I think we’re going to have a vaccine very soon too.”

“Now, the virus that we’re talking about having to do — you know, a lot of people think that goes away in April with the heat — as the heat comes in,” said Trump at a Feb. 10 meeting with some of the nation’s governors. “Typically, that will go away in April. … We have 12 cases — 11 cases, and many of them are in good shape now.”

“Looks like by April, you know, in theory, when it gets a little warmer, it miraculously goes away. I hope that’s true,” he repeated at a campaign rally in New Hampshire that night.

“We have done an incredible job,” Trump said at the White House on Feb. 27. “We’re going to continue. It’s going to disappear. One day — it’s like a miracle — it will disappear. And from our shores, we — you know, it could get worse before it gets better. It could maybe go away. We’ll see what happens. Nobody really knows. The fact is, the greatest experts — I’ve spoken to them all. Nobody really knows.”

Thousands protest in Israel after girl, 16, was 'gang-raped by 30 men'