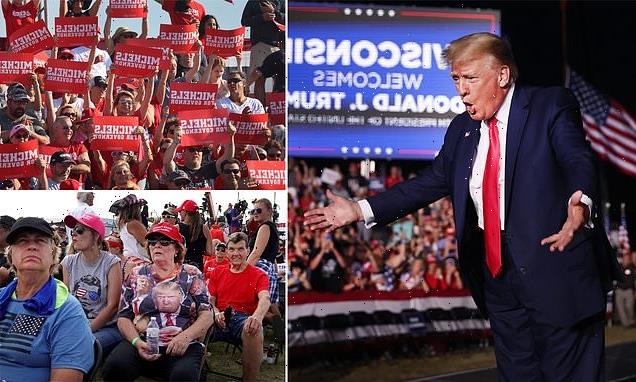 Former President Donald Trump criticized Democrats for the ‘biggest tax hike in history’ as he condemned Joe Biden’s Inflation Reduction Act while at a Wisconsin Rally.

Speaking to a crowd in Waukesha on Friday, Trump gave his endorsement to Tim Michels, a U.S. Army veteran, as the Republican candidate for governor of the state while taking aim at Democrats and GOP opponents.

In the negotiations for the deal, Trump claimed Senate Minority Leader Mitch McConnell got ‘taken for a ride,’ by moderate Democratic Senator Joe Manchin, who finally endorsed the deal.

‘Joe Manchin has totally sold out West Virginia, what he’s done to that state is disgraceful,’ Trump said, ‘and I told the old broken crow, Mitch McConnell, that this was going to happen.’ 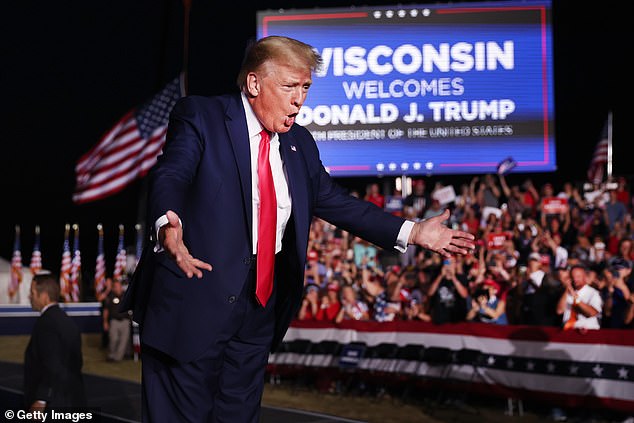 Former President Donald Trump took aim at GOP opponents and Democrats, slamming the reconciliation deal, while at a rally in Waukesha, Wisconsin on Friday 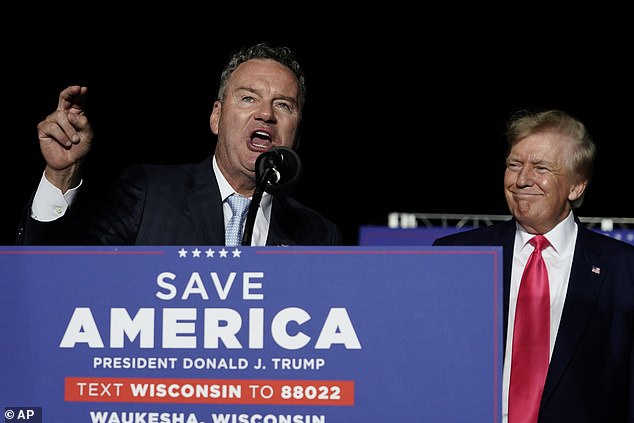 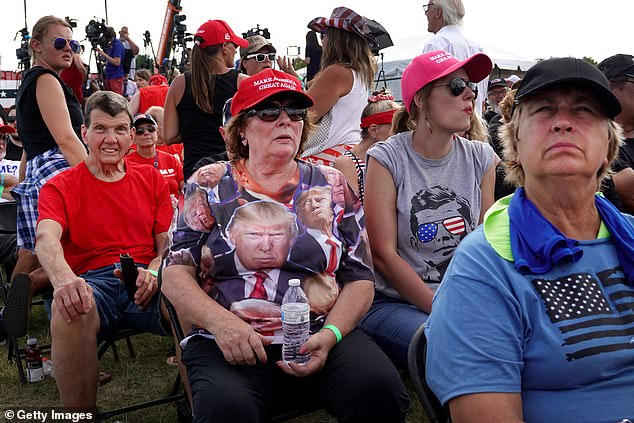 Hundreds gathered at the event, which had to be postponed for a few hours due to weather 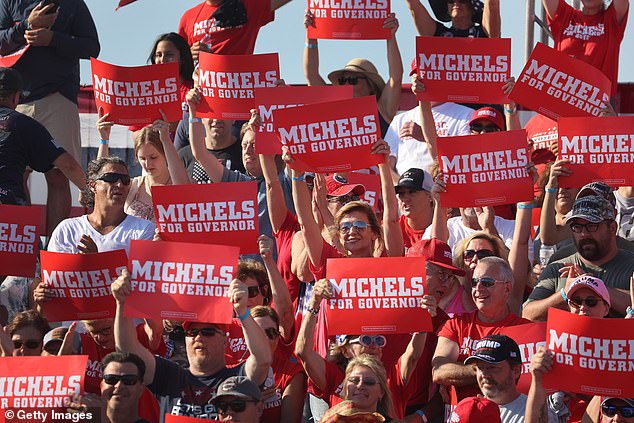 Despite the wait, supporters cheered on as Michels, who would take on Democratic Incumbent Tony Evers if he wins the GOP nomination 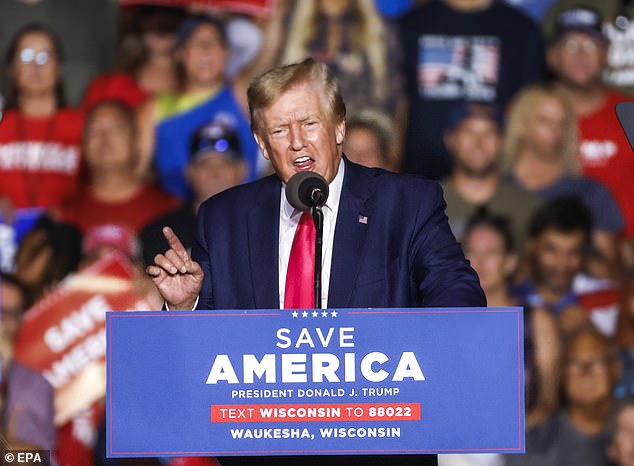 After blasting those at the national level, Trump then went after Michels’ primary opponent, Rebecca Kleefisch, who is backed by his former running mate Mike Pence.

Trump called Kleefisch ‘a career politician and a political insider. I´ve known her for a long time. She´s the handpicked candidate of the failed establishment, the RINOs.’

RINO refers to a derogatory term standing for ‘Republican In Name Only.’

‘Rebecca Kleefisch does not have what it takes to beat Tony Evers,’ Trump said of the Democrat running for reelection. ‘He’s going to win if he runs against Rebecca.’

The former president also provided his strongest criticism yet against Wisconsin State Assembly Speaker Robin Vos, who has repeatedly refused the former president’s calls to overturn the state’s 2020 election results.

‘Despite undeniable evidence of rigging and fraud, Speaker Vos has taken not steps in taking the Wisconsin Election Commission accountable or clean up the voter rolls or right any of the other terrible wrongs that were identified,’ Trump said, repeating unfounded claims that the election was stolen. 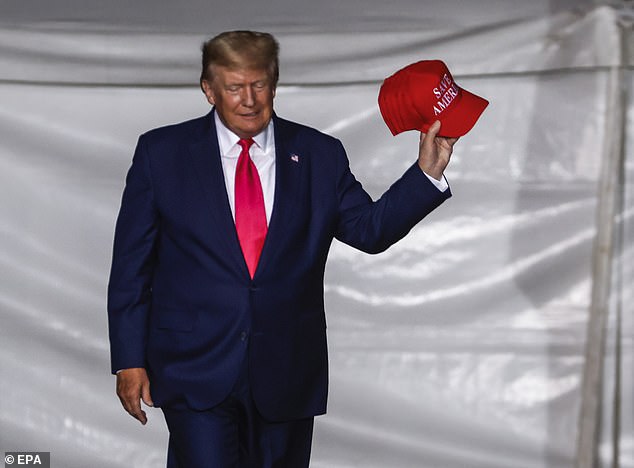 Pictured: Trump take the stage with several ‘Save America’ red hats on Friday 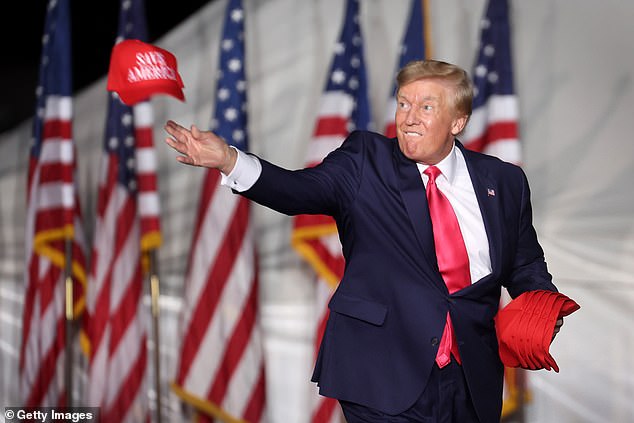 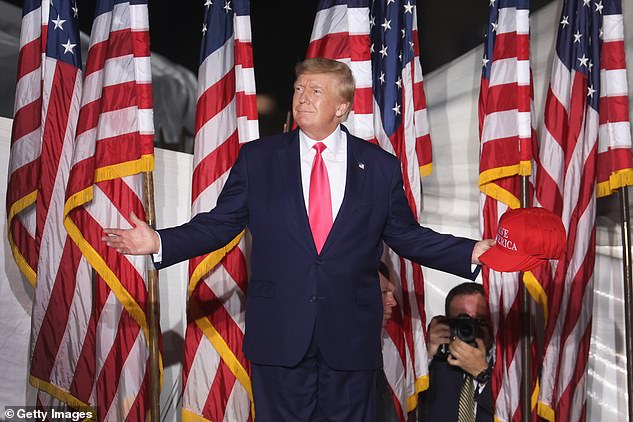 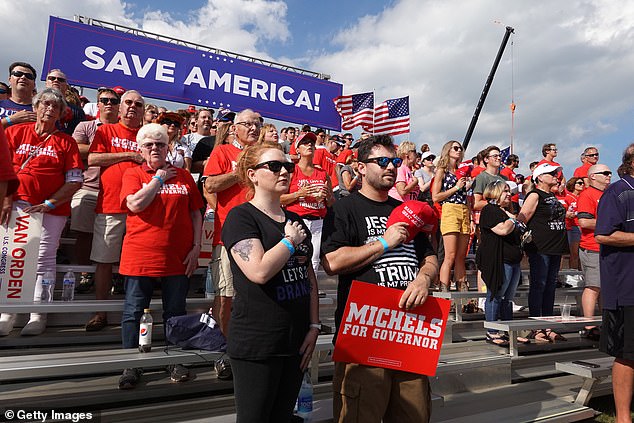 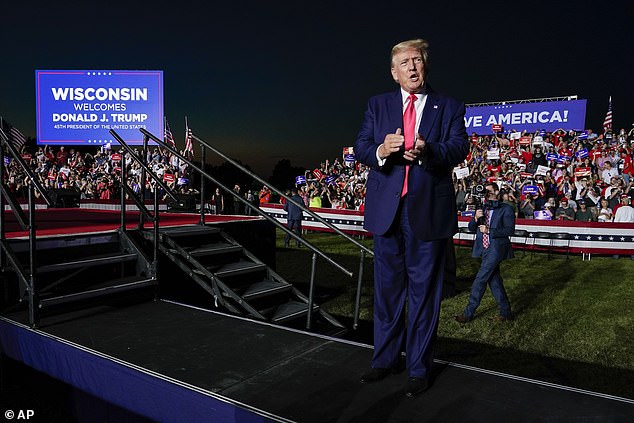 Like in previous rallies to endorse GOP candidates, Trump repeated unfounded claims that the 2020 presidential election was stolen from him

Kleefisch has racked up support not only from Pence, but also her former boss Walker, Texas Sen. Ted Cruz, GOP leaders of the Legislature, 56 lawmakers, the state chamber of commerce, the Tavern League and a majority of the state’s county sheriffs.

‘I am the one who is tested and proven and ready to go,’ Kleefisch said after Pence touted her at a stop in suburban Milwaukee on Wednesday. ‘I am the one who has won statewide four times.’

Michels claims that he is ‘not a politician,’ but he’s been a power player largely behind the scenes for decades and previously ran for U.S. Senate in 2004, losing to then-Sen. Russ Feingold. He’s been a regular donor to Republicans, including both Walker and Kleefisch. 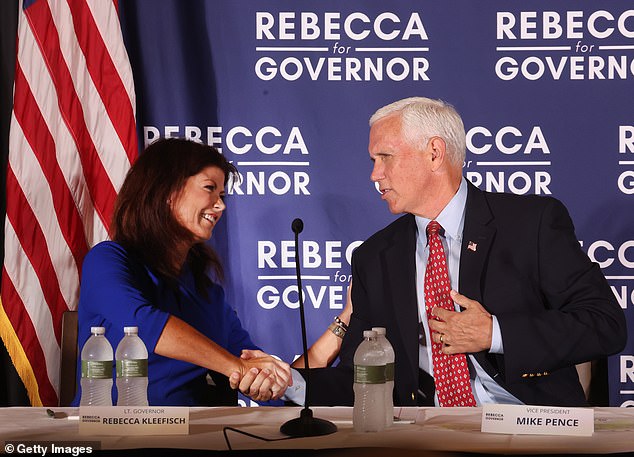 Wisconsin is the third state where Pence and Trump have been on opposite sides in governor’s races that highlighted deep divisions about the GOP’s future.

The territory that drew Pence and Kleefisch on Wednesday is the heart of Republican Wisconsin and home to the key suburban Milwaukee voters who will likely decide the fall election. It´s also Kleefisch’s home turf.

Trump, whose support in the area declined from 2016 to 2020, held his Friday rally for Michels just three miles from where Pence came for Kleefisch.

‘There is no candidate for governor in America who is more capable, more experienced, or a more proven conservative than Rebecca Kleefisch,’ Pence said in touting Kleefisch without mentioning Trump or Michels.

Novak Djokovic's wife gets into Twitter spat with Racquet magazine