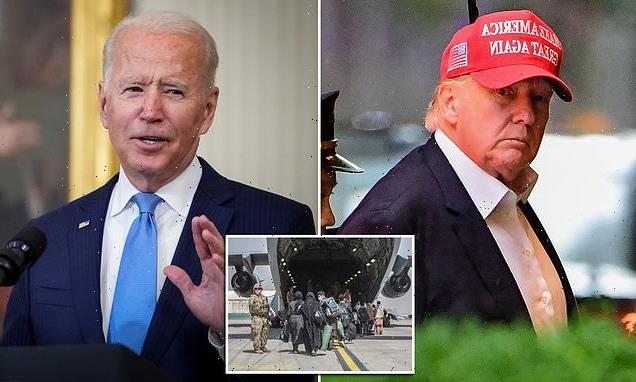 Trump says Biden is 'surrendering to terrorists' with Aug. 31 deadline

Former President Donald Trump is lashing out at President Joe Biden for ‘surrendering to terrorists’ after Biden made the decision to hold firm on an August 31 deadline for a full US withdrawal from Afghanistan.

‘Biden surrendered Afghanistan to terrorists and left thousands of Americans for dead by pulling out the Military before our citizens,’ Trump wrote in a statement shortly after noon on Tuesday.

‘Now we are learning that out of the 26,000 people who have been evacuated, only 4,000 are Americans. You can be sure the Taliban, who are now in complete control, didn’t allow the best and brightest to board these evacuation flights.

‘Instead, we can only imagine how many thousands of terrorists have been airlifted out of Afghanistan and into neighborhoods around the world. What a terrible failure. NO VETTING. How many terrorists will Joe Biden bring to America? We don’t know!’

Ward wrote on Twitter that a total of 4,407 Americans have been evacuated from Kabul since the operation began. 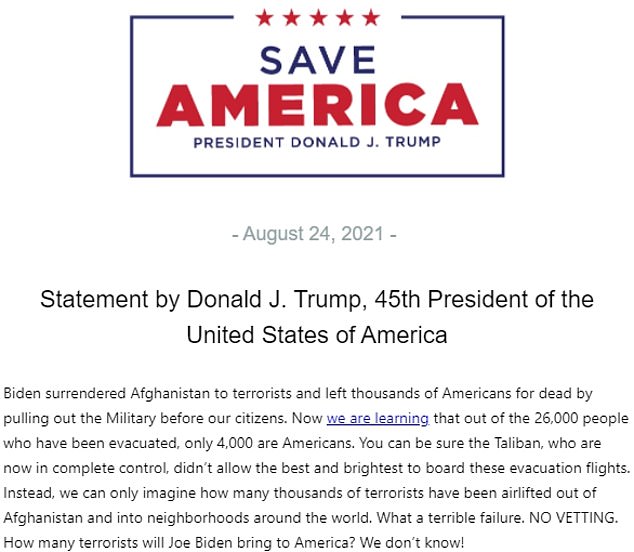 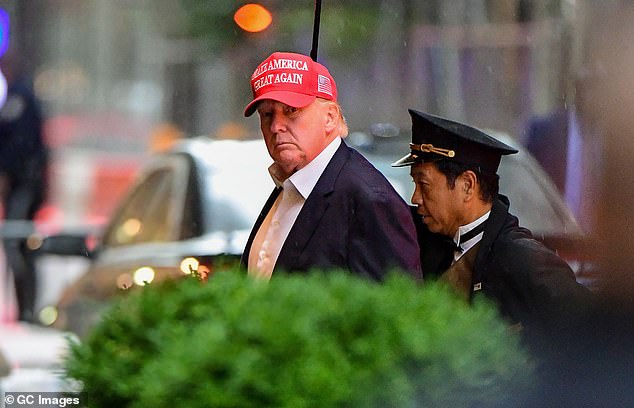 He added that 128 evacuation flights were planned for the next 48 hours and that around 13,000 people are currently at Hamid Karzai International Airport.

The Taliban announced they are blocking Afghan citizens from accessing the Kabul after allowing evacuations for little more than a week, likely complicating efforts to rescue Afghans who worked with the US military. 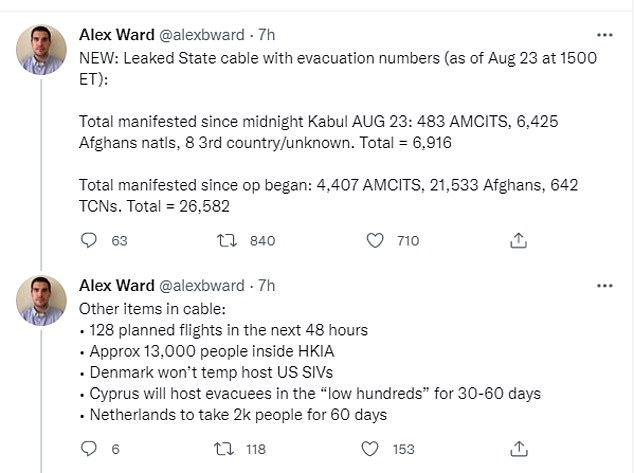 Trump referenced reporting from a Politico journalist, who said roughly 4,400 Americans have been evacuated since the operation began

A group of Republican lawmakers including military veterans also tore into President Joe Biden over his handling of the Afghanistan crisis and demanded he extend the  evacuation deadline past August 31 during a press briefing outside the Capitol on Tuesday.

‘We’re going to leave Americans behind 11 days before the 20th anniversary of September 11? Are you kidding me?’ Rep. Mike Waltz said. ‘The Taliban taking over means Al Qaeda 3.0 comes roaring back, except we’re in a worse position than before.’

‘That blood is and will be on Joe Biden’s hands.’

Biden initially seemed open to extending the deadline if necessary. As of Tuesday morning he is standing firm on the August 31 date, Reuters reports after the president’s emergency meeting with other G7 leaders. 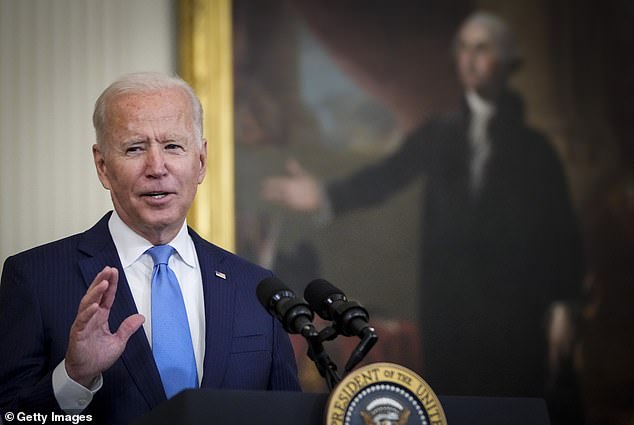 Psaki on Monday called out a reporter who asked about Americans ‘stranded’ in Kabul – telling him using the term was ‘irresponsible.’

At one point Waltz displayed a framed letter he said hangs on his office wall, claiming it was sent by the Taliban to a school principal.

The Taliban allegedly threatened ‘if he didn’t get out of town he would be beheaded within 24 hours’ for running a school for girls. 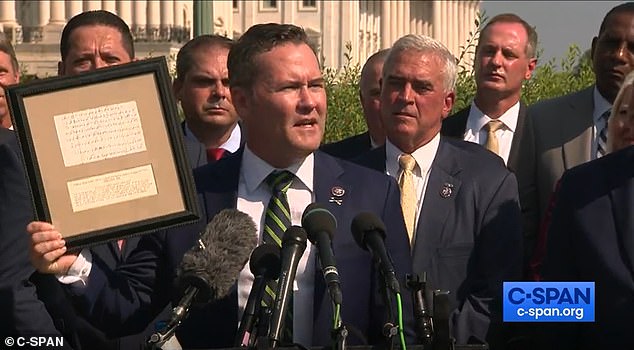 At one point Rep. Waltz, a Green Beret, held up a letter from the Taliban to an Afghan school principal, warning he would be beheaded for running a girls’ school

‘I leave this up as a reminder of the evil we’re dealing with, and what we’re condemning these people to,’ Waltz said.

‘We are at the very beginning of this crisis that Biden has created,’ he said. ‘We need him and we need his team to resign.’

The Pentagon said in a press briefing Tuesday that it did not have a number for how many Americans or Afghan allies are still in the country.

‘We are on the cusp of the biggest mass hostage crisis this country has ever seen,’ Waltz warned.

He said the looming threat would make the Tehran embassy hostage crisis in 1979 ‘look like a sleepover.’

A total of 57 coalition flights and 37 US military flights evacuated roughly 21,600 people from Kabul within 24 hours as of 3 a.m. this morning, according to White House numbers released early Tuesday.

Since August 14 58,700 people have been evacuated – but according to a Washington Post reporter, only 4,000 are Americans.

Washington Post’s Olivier Knox first tweeted that around 4,000 Americans have been evacuated since August 14 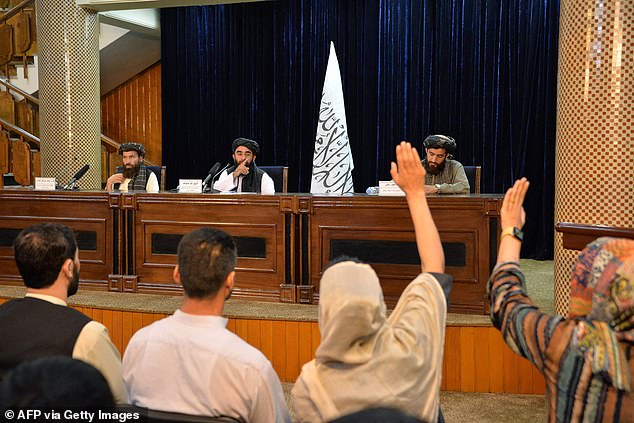 Meanwhile the Taliban released political prisoners across the country, with 220 inmates freed in Kandahar province on Tuesday.

The group also is now in control of billions of dollars of US military technology that was in the Afghan government’s possession, which could include more than 150 aircraft.

The US gave the Afghan military roughly $28 billion in weapons technology between 2002 and 2017.

An inspector general’s report from 2020 states the US gave more than 7,000 machine guns and nearly 1,400 grenade launchers to Afghanistan from 2017 to 2019, among other weapons. 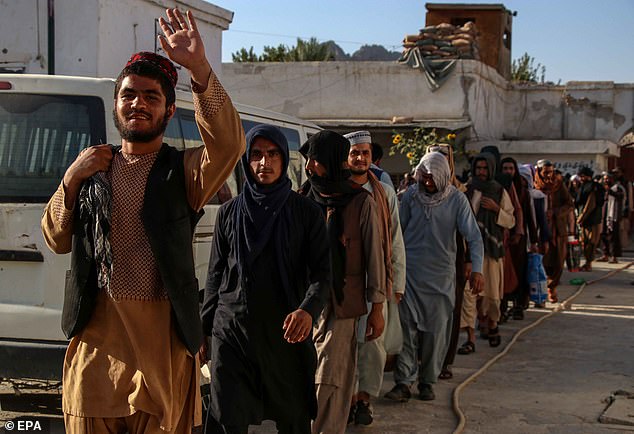 The Taliban released political prisoners over the last week, including these former inmates who are seen leaving a prison in Kandahar on August 24 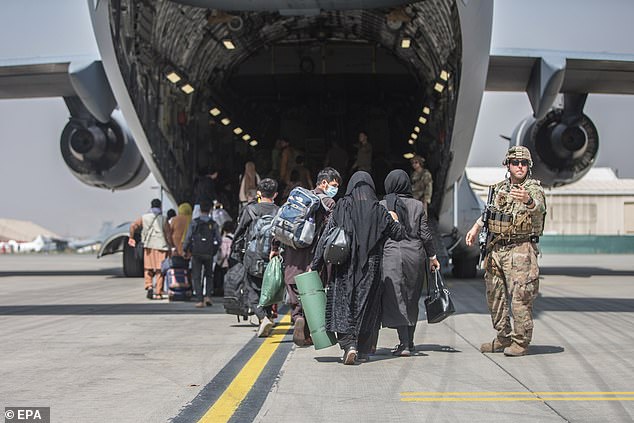 Afghan families board a US Air Force evacuation flight on August 23. On August 24 the Taliban announced no more Afghan citizens will be allowed to go to the airport

Waltz was outraged at the Taliban’s military acquisition on Tuesday.

‘The Taliban are going to be armed to the teeth, so when future American soldiers have to go back to deal with the problem…how many are going to die now, because they’re going to have to fight their way through our own equipment – our own damn equipment!’

‘This is a terrorist organization, the Taliban, and they now have control of a country because of President Biden’s failed policy,’ House Minority Whip Steve Scalise said at the event.

He said the Taliban’s control of Afghanistan would mean a heightened risk of terrorists coming to the US by crossing the southern border.

‘We want President Biden’s focus on rescuing every American who he left behind enemy lines, and to give us an accounting of who they are,’ Scalise said.

The Associated Press reported last week that up to 15,000 US nationals could still be in Afghanistan.

Republican leader Rep. Kevin McCarthy also publicly urged Biden to rethink this August 31 deadline, stating in a press conference that ‘we should stay until every single American is able to get out of Afghanistan.’

‘We should not negotiate it. We should explain that this is what is going to happen and anybody in our way to stop us from bringing Americans out will be in danger.’

‘The president needs to forget about the August 31st deadline. We need to send enough American personnel, military personnel to rescue our people, and by the way, there are more American soldiers there now than before the president made the decision to leave. Extend the deadline. Get outside the perimeter, make sure that every single American who wants to leave is able to get out with our assistance, and our Afghan allies,’ he said on Fox News.

‘Having made that decision, you’d have to conclude these guys couldn’t organize a two-car funeral.’