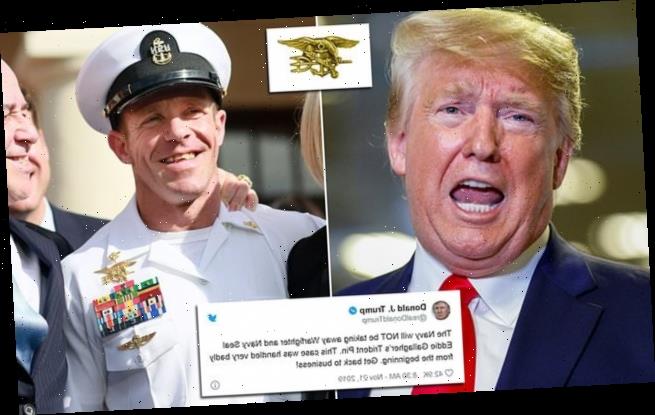 Donald Trump said Thursday that retired naval officer Eddie Gallagher will keep his status as a special operations SEAL following an acquittal for war crimes and a presidential pardon for a less serious offense.

‘The Navy will NOT be taking away Warfighter and Navy Seal Eddie Gallagher’s Trident Pin,’ Trump tweeted. ‘This case was handled very badly from the beginning. Get back to business!’

Navy commanders had begun an administrative process to strip Gallagher of his SEAL status after the president ordered them to cancel his demotion in rank.

Gallagher was convicted of posing for a photo with the corpse of a dead ISIS fighter. But a court martial cleared him of murder charges when a medic confessed to the Afghanistan war crime after military prosecutors granted him immunity. 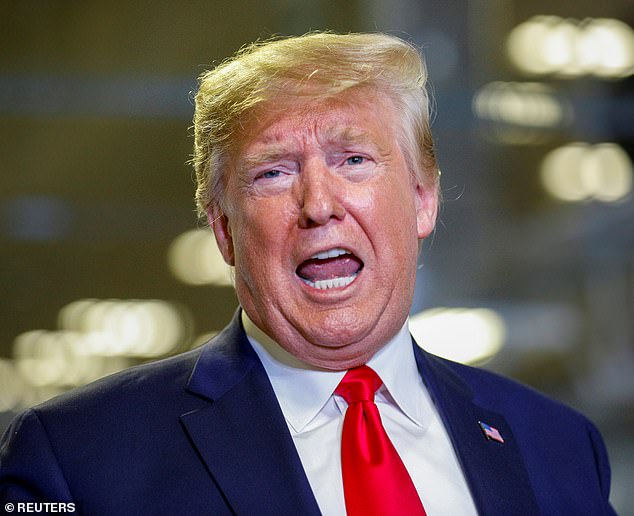 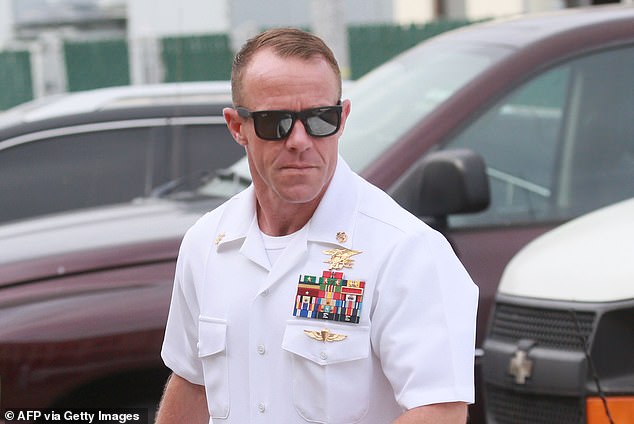 Special Operations Chief Edward Gallagher was acquitted of murder in July and was pardoned of less serious crimes by President Trump but miffed Navy commanders still wanted to strip him of his SEAL status; his SEAL Trident pin can be seen above his uniform ribbons

Trump is the U.S. military’s commander-in-chief; he swatted down Navy leaders who planned to strip Gallagher of his SEAL ‘Trident’ as pushback for the pardon

Attorneys representing Gallagher say the plan to make him an ex-SEAL was ‘retaliation’ for his continued criticism of the U.S. Navy.

The SEAL has maintained that he was the scapegoat for more junior SEALs who did not like his leadership style.

Rear Adm. Collin Green made his intentions clear at a staff meeting Monday, saying he wanted to remove Gallagher’s Trident pin, which designates him as a SEAL. 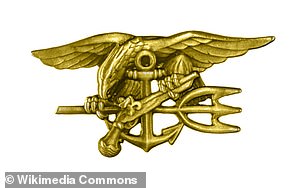 Attorney Marc Mukasey told DailyMail.com that his client’s rights ‘were violated over and over again. We exposed the misconduct and beat the fabricated charges at trial.’

‘What the bureaucracy is doing to him now is pure and simple retaliation,’ he said.

His other lawyer, Tim Parlatore, said: ‘What I’m hearing is that the rear admiral said very disparaging comments about the president and stated his disagreement with the president’s actions and said therefore I want to move forward in removing his Trident.’

Earlier, he told ABC it was the ‘worst thing’ they could do to Gallagher.

Parlatore filed an inspector general´s complaint Tuesday accusing Green of insubordination for defying Trump. He said Green should be fired and court-martialed.

Gallagher’s acquittals ended claims that he had fatally stabbed the ISIS militant in the photos, and that he had tried to murder civilians by shooting at them.

Green on Wednesday planned to notify Gallagher that he has called for a peer-review process, known as a Trident Review Board, to assess whether his fellow SEALs believe he is still suitable to remain on the elite force, said two U.S. officials familiar with the case but not authorized to speak publicly.

He also called for a peer-review of three SEAL officers who oversaw Gallagher during his deployment to Iraq in 2017: Lt. Cmdr. Robert Breisch, Lt. Jacob Portier and Lt. Thomas MacNeil.

The officials disputed that the reviews are in retaliation for the president´s actions, but Trump’s decision as U.S. commander-in-chief has ended the case.

They said that discussions about convening a review board began shortly after Gallagher´s conviction in July. Early drafts of the letters were dated November 1, the officials said. 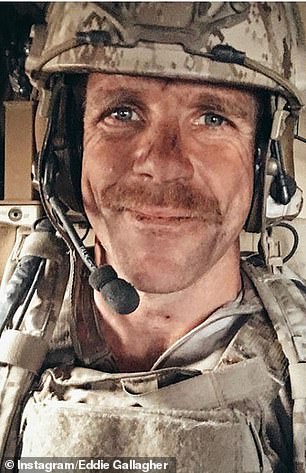 Gallagher during combat. He returned in 2018

Gallagher would have gone before a five-person review board that will include one SEAL officer and four senior enlisted SEALs. The other three officers will go before three-person boards.

The process might haved lasted until January. The review boards´ recommendations would have been sent to Green, who would have forwarded them to Navy Personnel Command along with a recommendation.

Removing a Trident pin means a naval officer is no longer a SEAL but doesn’t change his eligibility to serve in uniform.

Naval Special Warfare spokeswoman, Capt. Tamara Lawrence, said in a statement that Green ‘remains focused on delivering a capable, ready, and lethal maritime special operations force in support of national security objectives, which includes assessing the suitability of any member of his force via administrative processes.’

Last month, Adm. Mike Gilday, the U.S. chief of naval operations, denied a request for clemency for Gallagher and upheld the military jury’s sentence. Parlatore said a loss of rank would have cost Gallagher up to $200,000 in retirement funds.

Eugene Fidell, who teaches military justice at Yale Law School and served as a lawyer in the Coast Guard, said he’s not surprised the Navy would call for a review.

‘I think this would have happened anyway to a SEAL with a court-martial conviction,’he said.

Scooter Braun to Taylor Swift: Tell Your Fans to Stop Threatening My Family!

How many children and grandchildren does I’m A Celebrity’s Caitlyn Jenner have?
World News