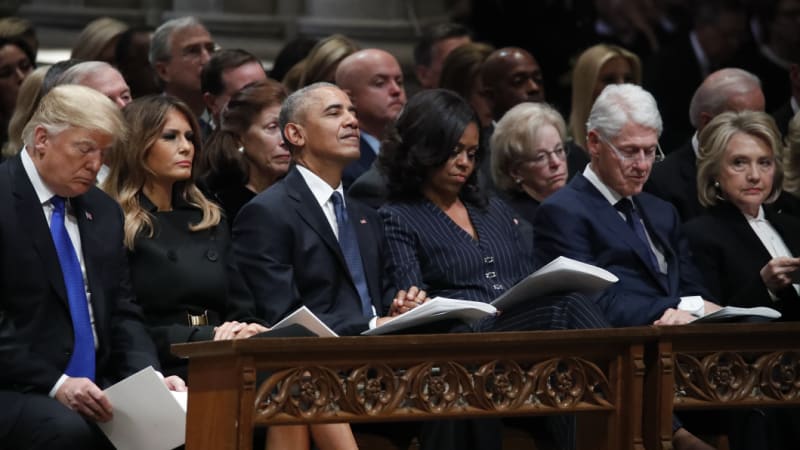 Trump on the fringes of presidents’ group at George H.W. Bush’s funeral

Washington: The nation's most exclusive fraternity – the presidents club – assembled on Wednesday to mourn George H.W. Bush, putting on public display its uneasy relationship with the current occupant of the Oval Office. The uncomfortable reunion brought President Donald Trump together in the same pew with past White House residents who have given him decidedly critical reviews.

The late Bush was the de facto chair of the modern incarnation of the president's club, transcending contentious campaigns and party lines to bring together fractious personalities who share that rarefied experience. But the staid group of Oval Office occupants has been disturbed since Donald Trump's election. And since his swearing-in, Trump has spurned most contact with his predecessors – and they have snubbed him in return. 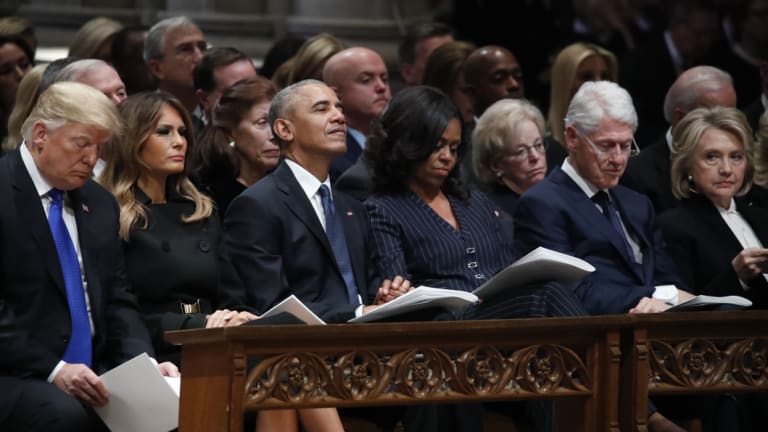 Small talk among the former presidents stopped once the Trumps arrived.Credit:AP

The Bushes had made it known to the White House months ago that, despite differences in policy and temperament, the late president wanted Trump to attend the national service. The ceremony's tributes at times stood as an unspoken counterpoint to Trump's leadership, as historian Jon Meacham eulogised Bush by recounting his life's credo: "Tell the truth, don't blame people, be strong, do your best, try hard, forgive, stay the course." George W. Bush added of his father: "He could tease and needle, but not out of malice."

Ahead of Wednesday's state funeral for the late president, former presidents Barack Obama, Bill Clinton and Jimmy Carter and their spouses chatted easily among themselves from their seats in the front row at Washington's National Cathedral. The ex-presidents leaned over their wives to chat with one another. Bill Clinton and former first lady Michelle Obama shared a quiet conversation.

But the Trumps' arrival, minutes ahead of the motorcade carrying Bush's casket, cast a pall on the conversation. First lady Melania Trump approached first, greeting both Obamas and former President Clinton with a handshake. Hillary Clinton appeared to nod at Mrs Trump but did not interact with Trump himself and stared straight ahead during the service. Jimmy Carter waved a hand. The president then shook hands with both Obamas before taking his seat.

After that, the small talk along the row largely stopped.

Next followed George W. Bush, who, by contrast, shook hands with the entire row of dignitaries – and appeared to share a moment of humour with Michelle Obama, slipping something into her hand. Bush took his seat across the aisle from the ex-presidents, with the rest of the Bush family. 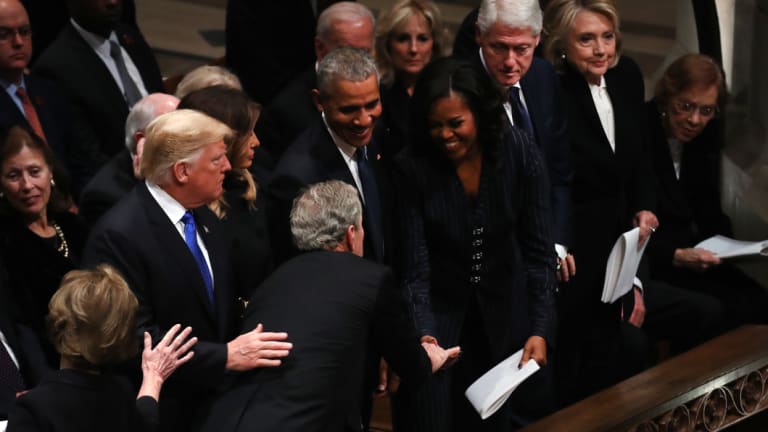 The Trump-Obama handshake marked the first direct interaction between the current president and his immediate predecessor since Inauguration Day 2017. Trump has not spoken to Democrats Clinton or Obama since that day.

He did speak with the younger Bush during the contentious confirmation process for Supreme Court Justice Brett Kavanaugh, as the previous Republican president helped lobby for his former aide. Democrat Carter has been briefed by White House officials on North Korea, though it was not clear if he has engaged directly with Trump.

Trump has sought to meet the elder Bush's passing with grace, a contrast to the rhythms of much of his tumultuous presidency. He came to office after a campaign in which he harshly criticised his Democratic predecessors and co-opted a Republican Party once dominated by the Bush family. Despite the traditional kinship among presidents, Trump's predecessors have all made their discomfort known in different ways. 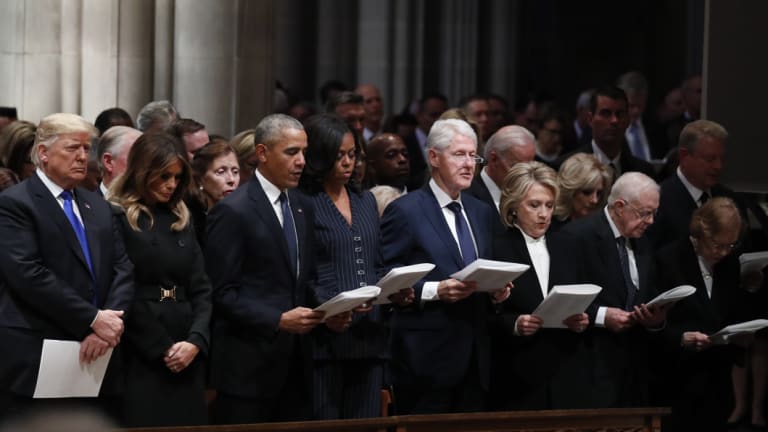 "It's unusual that a cabal of ex-presidents from both parties dislike a sitting president and that's what you've got happening right now," said Douglas Brinkley, a history professor at Rice University.

By virtue of health, longevity and opportunities for continued influence, ex-presidents are sticking around longer than ever and staying active in the public eye.

Past presidents often built relationships with their predecessors, Brinkley said. "Bill Clinton would reach out to Richard Nixon for advice on Russia," he said. "Harry Truman leaned heavily on Herbert Hoover. It's endless."

To be sure, Brinkley added, those ties vary from president to president and there have been chilly relationships as well, noting, for example, that "FDR would never talk to Herbert Hoover." 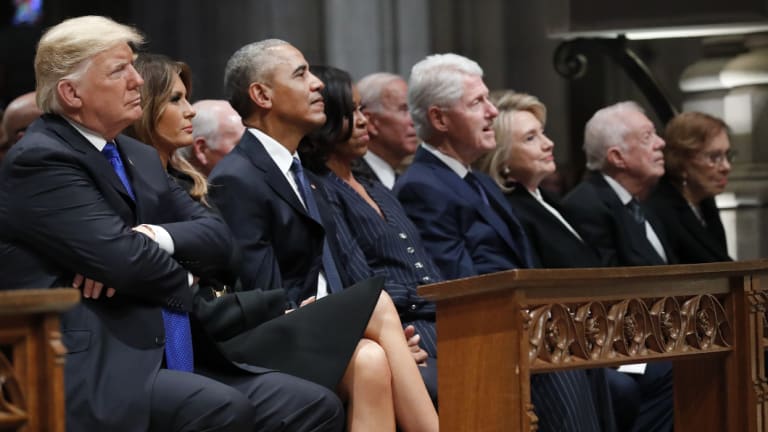 Since his swearing-in, Donald Trump has spurned most contact with his predecessors – and they have snubbed him in return.Credit:AP

Busy with a mix of personal pursuits, charitable endeavours – and, in some cases, paid speaking gigs – the former leaders don't mingle very often, making a funeral in their group a big occasion. Bonded by the presidency, they tend to exercise caution in their comments about each other. Still, all the living former presidents have aimed barbs – directly or indirectly – at Trump.

In a speech in September, Obama slammed the "crazy stuff" coming out of the White House without directly naming Trump. Last year, the younger Bush made a speech that confronted many of the themes of Trump's presidency without mentioning him by name, cautioning that "bigotry seems emboldened" and the nation's politics "seems more vulnerable to conspiracy theories and outright fabrication".

Over the summer, Carter told The Washington Post that Trump's presidency was a "disaster". And Clinton – stung by Trump's defeat of wife Hillary Clinton in the 2016 presidential race – told a weekly newspaper in New York state after her stunning loss that Trump "doesn't know much".

Even the late Bush's feelings about Trump were harsh at times. In Mark K. Updegrove's book The Last Republicans, published last year, the elder Bush called Trump a "blowhard".

There have been other moments when the ex-presidents offered more sympathetic sentiments for Trump. After Trump's surprise victory, Obama stood in the Rose Garden at the White House and said he was "rooting" for the next president. Carter told The New York Times in 2017 the media had been harder on Trump than other presidents. Clinton said in June that America should be rooting for Trump to succeed in his North Korea talks.

While he has struggled to set the right tone in past moments of national grief, Trump has gone out of his way to address Bush's passing with consideration, issuing kind statements and ensuring that Bush family members have whatever they need for the funeral. On Tuesday, first lady Melania Trump welcomed Laura Bush and other family members for a tour of the White House Christmas decorations. And Trump and the first lady visited with members of the Bush family at Blair House.

Who Is Sophie Lennon On ‘Marvelous Mrs. Maisel’? Susie Is Faced With A Big Decision
World News