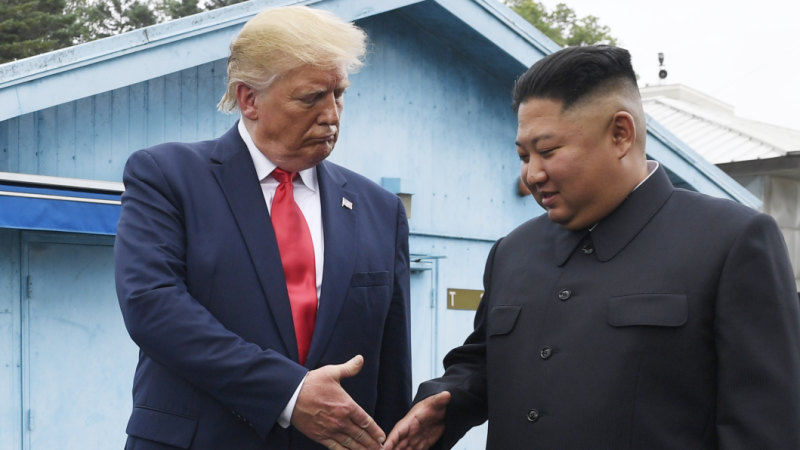 Seoul, South Korea: President Donald Trump became the first US president to set foot in North Korea on Sunday as he greeted Kim Jong-un, the country's leader, at the heavily fortified demilitarised zone that has divided the peninsula for more than six decades.

Trump stepped across the border and was met by a beaming Kim as the two shook hands and patted each other's backs in an encounter carried live on international television in an unprecedented, camera-friendly demonstration of friendship intended to revitalise stalled nuclear talks. 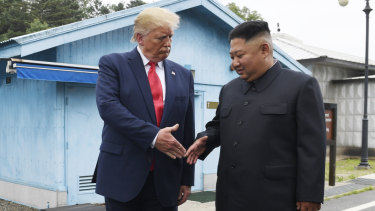 President Donald Trump meets with North Korean leader Kim Jong-un at the border village of Panmunjom in the demilitarised zone.Credit:AP

Kim praised the US President for his "courage" in making the visit.

A showman by nature and past profession, Trump delighted in the drama of the moment, the first time US and North Korean leaders had gotten together at the line bristling with concertina wire and weapons where heavily armed forces have faced off across a tense divide for 66 years since the end of fighting in the Korean War.

The encounter was nothing more than a brief greeting, not a negotiation, and did nothing concrete to bridge the enormous gap between the two sides over the fate of North Korea's nuclear program. Since talks broke down in Hanoi, Vietnam, four months ago, there has been no progress, and neither side on Sunday disclosed any plans for how to move forward beyond the handshake. 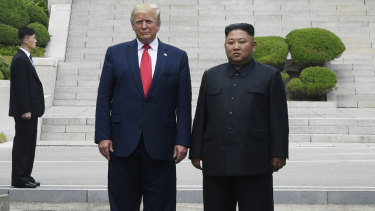 But Trump gambled that the show of amity could crack the logjam and open the way to further talks, underscoring his faith in the power of his personal diplomacy to achieve what has eluded presidents in the past. More than halfway through his term, Trump is eager for a resolution to the long-standing nuclear dispute, seeing it as signature element of the legacy he hopes to forge.

Kim accepted Trump's unorthodox invitation, posted on Twitter just a day earlier, and both sides scrambled to manage the logistics and security required for such a get together. Trump was already scheduled to make an unannounced visit to the DMZ during his trip to South Korea, and while he portrayed the idea of meeting with Kim while there as a spontaneous one on Saturday, he had actually been musing out loud about it for days in advance.

"There are 35 million people in Seoul, 25 miles away," Trump said, gazing into the distance as he was shown the line from the observation deck before Kim's arrival. "All accessible by what they already have in the mountains," he added, an apparent reference to the massive North Korean artillery firepower built up within range of Seoul over several decades. "There's nothing like that anywhere in terms of danger."

Panmunjom, which straddles the North-South Korean border, is commonly known as the "truce village" because that is where the American-led UN forces signed an armistice with North Korea and its Chinese backers in 1953 to halt the fighting.

Even in this symbolic moment of reconciliation, Trump seemed to dwell on his grievances about his media coverage, repeating complaints he has made several times over the past day that he has not received enough credit for de-escalating tensions on the peninsula.

"There was great conflict here prior to our meeting in Singapore," he said, referring to his first encounter with Kim a year ago. "Tremendous conflict and death all around them. And it's now been extremely peaceful. It's been a whole different world."

In the year since that first meeting, North Korea has suspended nuclear tests, released detained Americans and sent back to the United States the remains of some US soldiers killed in the war. But it has not agreed to a plan to give up its nuclear arsenal, as Trump has demanded, and in May it launched short-range missiles in violation of UN resolutions.

Critics said the greeting at the DMZ was nothing more than a glorified photo opportunity by a president who himself ratcheted up the conflict with North Korea in his first year in office by making "fire and fury" threats to destroy the small Asian country if it threatened U.S. security.

"At this point I'm not sure what it is that President Trump is trying to accomplish, because while all this engagement has gone on, there has been no decline in the stockpile of North Korean nuclear weapons or missiles. In fact they have increased them," Joseph Yun, who was the U.S. special representative for North Korea policy under President Barack Obama and Trump, said on CNN. "Yes, it's true that tensions are down, but remember that tensions were built up because of all the fire and fury in 2017."

On the other hand, Sue Mi Terry, who served as a National Security Council aide specializing in Korean affairs under both Presidents George W. Bush and Obama, said it could yield progress if Trump proves willing to accept a partial accord short of a comprehensive agreement.

"This meeting could lead to a more substantive meeting down the road, later in the year," she said in an interview. "I do think Kim could offer just enough on the negotiating table such as the Yongbyun nuclear facility plus yet another suspected nuclear facility in order to secure an interim deal with Trump and at least some sanctions relief."

Kim crossed the DMZ in April 2018 to meet with Moon, becoming the first North Korean leader to step over the line since fighting between the countries ended in 1953. Former Presidents Jimmy Carter and Bill Clinton each visited North Korea, flying into its capital, Pyongyang, but only after they left office. Sitting presidents, including Ronald Reagan, Clinton, Bush and Obama, visited the DMZ but were never greeted by North Korea's leader.

Trump's meeting with Kim in Singapore in June 2018 was the first time U.S. and North Korean leaders had met anywhere since the war, and produced vague promises to pursue an end to Pyongyang's nuclear arsenal. Their second summit meeting, in Hanoi, ended in failure in February when the two leaders could not agree on a concrete way to accomplish that goal.

North Korean officials went dark after the collapse of the talks, refusing to respond to either the Americans or the South Koreans amid conflicting reports about the fate of the negotiators blamed by Kim for the failure. North Korea's missile test was seen as a reflection of Kim's frustration over the stalled negotiations.

In recent weeks, however, the North Korean government has reemerged on the world stage as Kim exchanged letters with Trump and met separately with President Vladimir Putin of Russia and President Xi Jinping of China, taken as signals of its interest in resuming diplomacy.