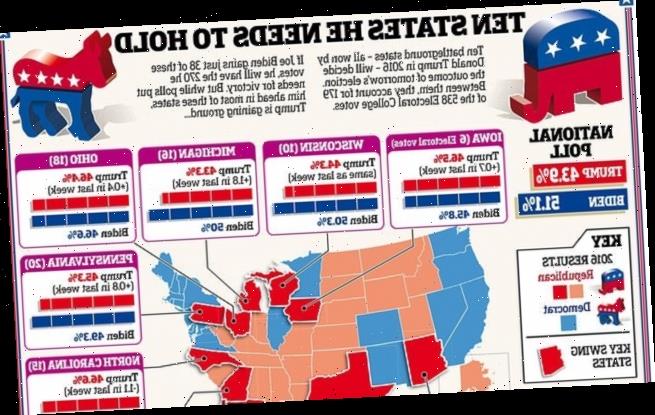 The Donald’s not done for yet: Trump has a SEVEN-point lead in vital swing state of Iowa according to the same late poll that showed he could win the White House in 2016

Donald Trump has surged ahead in the key swing state of Iowa, according to a poll that suggests he has a slim chance of pulling off another huge upset.

The survey for the Des Moines Register showed the President was seven points ahead of Joe Biden with a day until the election.

The same late poll in 2016 was one of the few showing that Mr Trump could win the White House. It gave him a seven-point Iowa lead over Hillary Clinton which became a win by 9.6 percentage points.

The survey will worry Democrats who fear Mr Biden faces the same fate as Mrs Clinton, also the strong favourite. 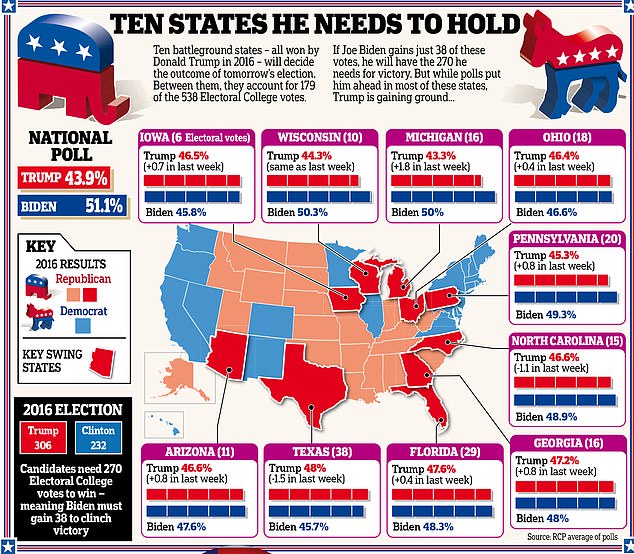 He is ahead by around seven points overall in the polls, and there is little doubt that – like her four years ago – he will win considerably more votes than Mr Trump. However, the outcome of the election will be decided not nationally, but by a handful of battleground states.

In the final weekend of campaigning the two candidates stormed through the swing states with a particular focus on Pennsylvania. It is one of ten won last time by Mr Trump and he needs to hold on to most of them if he is to remain in the White House.

Mr Biden leads in nearly all of these states, but his advantage is slim and falling.

Together they account for 179 Electoral College votes and Mr Biden needs to grab 38 on top of the 2016 Clinton haul.

If Mr Trump can hold on to enough large states – such as Texas with 38 votes, Florida with 29, Pennsylvania with 20 and Ohio with 18 – then Mr Biden may struggle to make up the numbers elsewhere.

Iowa is one of the few swing states where Mr Trump has moved ahead, and the Register poll shows it is becoming a sizeable one. He has 48 per cent compared with Mr Biden’s 41 per cent – the same poll in September showed them tied on 47.

A RealClearPolitics (RCP) average of polls gives Mr Trump a lead of 0.7 per cent in Iowa. 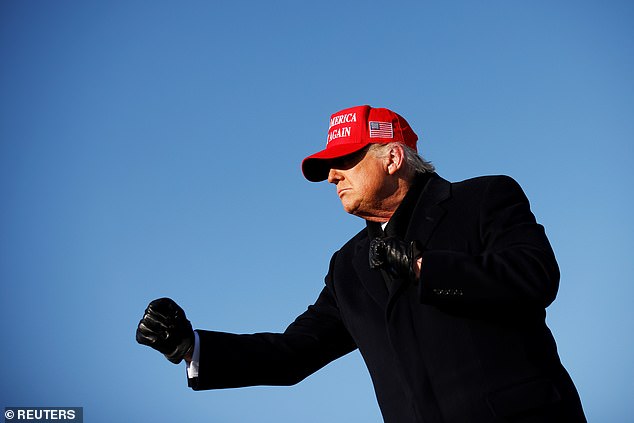 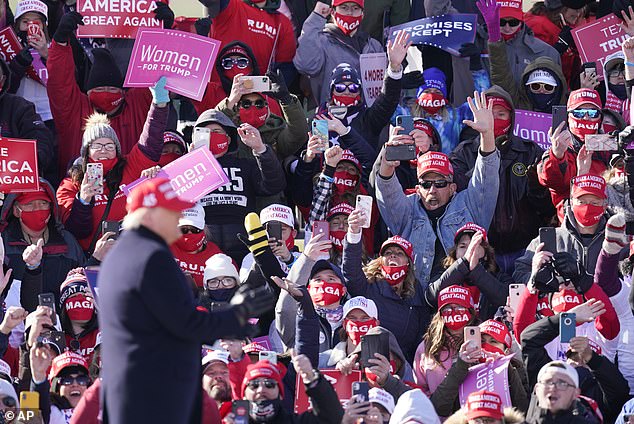 He has yet to pull off the same feat in enough of the other swing states and is still trailing by four points in Pennsylvania. Yesterday he tweeted: ‘Our numbers are looking VERY good all over. Sleepy Joe is already beginning to pull out of certain states. The Radical Left is going down!’

The President’s path to victory involves retaining and building on his voting base from 2016, but polls show he is haemorrhaging support among women and pensioners. As a result he is relentlessly focusing his efforts on very targeted states so he can scrape the 270 Electoral College votes needed for victory.

Mr Trump must retain all the southern states he won in 2016 including Arizona, Florida and Georgia, where he is behind by 1 per cent, 0.7 per cent and 0.8 per cent respectively.

If the President also holds on to two or three of five ‘Rust Belt’ states in the Mid West that he won from the Democrats in 2016, then he has a path back to the White House. He is behind in three, including Michigan, which he won last time by seven points.

Political strategist Mike Madrid, one of the founders of The Lincoln Project, a Republican group opposing Mr Trump, said: ‘If he does have a dramatic overperformance… I could easily see them winning North Carolina and Florida’.

Boxing’s wackiest excuses from love triangle, too much sex and HAIR GEL as Wilder claims he was ‘spiked’ for Fury loss – The Sun
World News