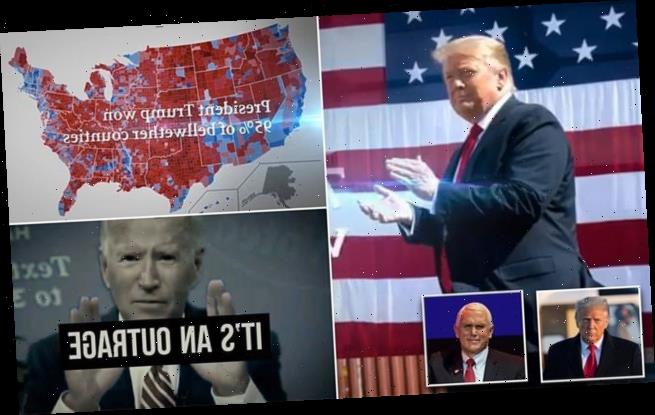 Some of the new ads, which are running nationally on Fox News Channel, Fox Business Network, Newsmax and One America News Network, with more specific asks geared to voters Arizona, Georgia, Michigan and Wisconsin, were tweeted out by the president Thursday morning.

They’ll be running through the night of January 5, a campaign spokesman told DailyMail.com – with Congress set to approve the Electoral College count on January 6, with Vice President Mike Pence presiding. 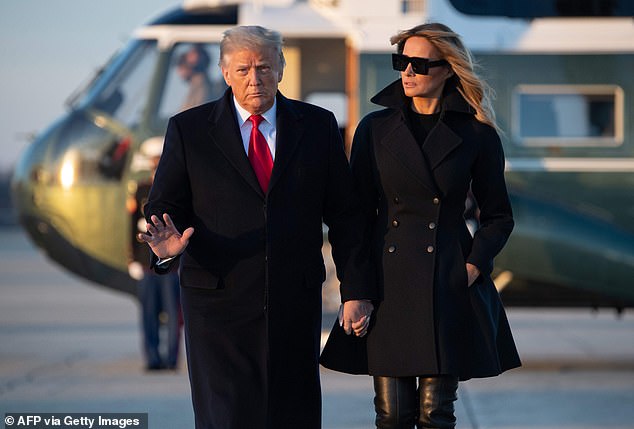 President Donald Trump’s campaign (left) is spending $5 million to run TV and radio ads in the run-up to the January 6 meeting of Congress to approve the Electoral College count, asking supporters to call state lawmakers and encourage them to overturn the election results 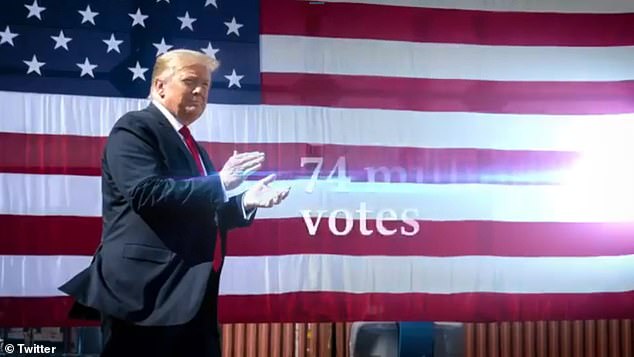 One new ad that Trump debuted on his Twitter account Thursday morning, boasted about the 74 million votes he received and then made false claims about widespread voter fraud. President-elect Joe Biden won 81 million votes 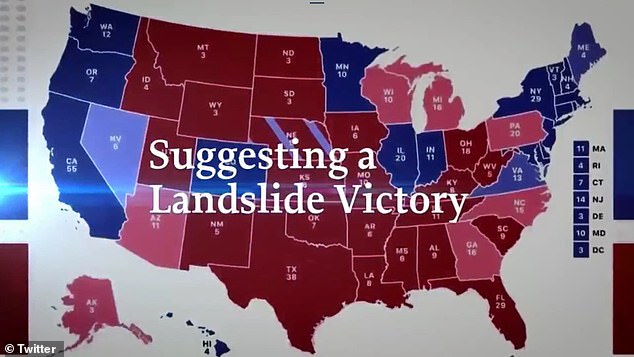 A map in the ad shows a number of states that went blue for Biden – Pennsylvania, Michigan, Wisconsin, Georgia and Arizona – marked in light red, as if Trump won them in a ‘landslide victory’ 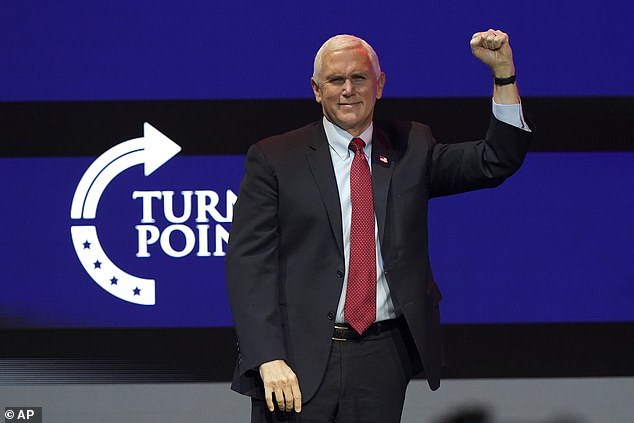 Vice President Mike Pence will have to preside over the January 6 Congressional meeting where lawmakers have the opportunity to object to Electoral College vote counts, but the votes in Congress don’t exist for those counts to be overturned

Trump has complained that Pence hasn’t done enough to defend him, according to reporting from The New York Times and Axios.

In an ad entitled, ‘Stop the Steal,’ which Trump featured on his Twitter account early Thursday, the spot says that, ‘America rewarded President Trump with over 74 million votes.’

President-elect Joe Biden won more than 81 million votes – and beat Trump in the Electoral College 306 to 232.

‘Millions more than Obama and both Clintons. More votes than any president. More votes from African-Americans, Latinos and Jewish Americans than any Republican in decades,’ it continued.

‘President Trump won Ohio, Florida and 95 per cent of bellwether counties. But something happened,’ it said.

The ad then calls out states that ‘rushed out mail-in ballots’ calling that a ‘recipe for fraud.’

It falsely claims that ‘Biden ballots [were] added in the middle of the night.’

It also shows footage of Biden bungling a talking point about his campaign’s efforts to combat voter suppression.

Biden said that he had the ‘most extensive and inclusive voter fraud organization in …history.’

The ad also includes a map where several states that went blue for Biden – Pennsylvania, Arizona, Michigan, Georgia and Michigan – are marked in red.

‘It’s an outrage,’ the Trump campaign ad said. ‘The American people deserve to know the truth.’

In ads targeted specifically at states, supporters are asked to call figures like Arizona Gov. Doug Ducey, a Republican, who already certified the state’s results.

A Wisconsin radio ad includes a number that dials the Republican Party of Wisconsin.

Neither of these entities have the power to overturn the Electoral College, which already voted in Biden’s favor on December 14, giving him the expected 306 votes.

Pence was facing additional pressure Wednesday after right-wing fringe websites misled Trump supporters by saying that the vice president could play the so-called ‘Pence Card,’ claiming that U.S. code says the vice president must accept or reject the election result on the third Wednesday of December.

That date, this year, is December 23, which went by with no such action from Pence because the vice president doesn’t have that power.

Pence is, however, supposed to chair the January 6 meeting in the House of Representatives when the Electoral College tally is formalized.

At this meeting, if a House member is joined by a senator, they can hold up the proceedings by contesting the count in certain states.

The House and Senate then meet in their respective chambers and debate the objection, with a simple majority needed to overrule the complaint.

Senate Majority Leader Mitch McConnell has asked Republican senators not to engage in this effort – which is already being backed by several GOP House members – because it will put his caucus in a tough spot.

There won’t be enough votes in the Senate to toss out any of the states’ results, so McConnell would prefer Republican senators to not have to pick sides between Trump and the legitimate election result.

At the end of proceedings, Pence will have to announce Biden as the winner.

This, according to Axios, has Trump riled up, as the president considers Pence fulfilling his Constitutional duty as the ‘ultimate betrayal,’ as the newsite put it.

Axios also reported that Trump was rattled by a Lincoln Project ad that says, ‘When Mike Pence is running away from you, you know it’s over.’

‘The end is coming Donald. Even Mike Pence knows. He’s walking away from your trainwreck. From your desparate lies and clown lawyers,’ the spot says.

On Tuesday, however, Pence told a crowd of young conservatives at the Turning Point USA Student Action Summit that the fight was ongoing.

But Pence then mentioned Georgia – where Republican Sens. Kelly Loeffler and David Perdue are on the ballot in a January 5 run-off race – suggesting the comments could be about that contest and not the presidential race.

Pence could also abandon his responsibility and not chair the January 6 Congressional meeting.

The last person to do that was Vice President Hubert Humphrey in 1969.

He was the Democratic nominee and had been defeated by Republican Richard Nixon.

Humphrey was overseas at the time attending the funeral of Trygve Lie, the United Nations’ first secretary general.