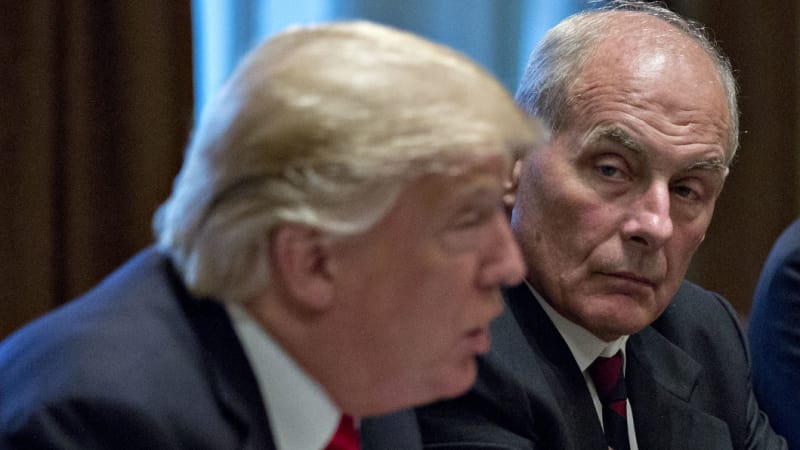 Trump announces his Chief of Staff John Kelly will step down

White House Chief of Staff John Kelly will step down toward the end of the year, removing a key force for West Wing discipline from President Donald Trump's inner circle. 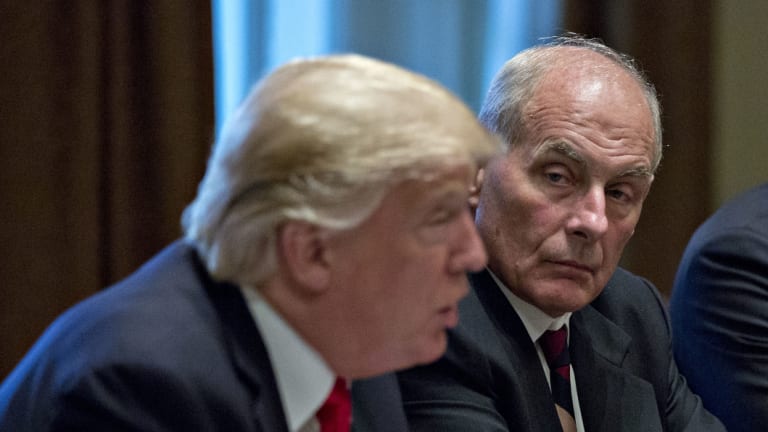 White House chief of staff John Kelly (right) was accused of calling the President an idiot.Credit:Bloomberg

Ayers has emerged as a favorite to replace Kelly; Trump has recently taken the unusual step of inviting Ayers to accompany him on Air Force One, even without Pence present, people familiar with the situation said.

Trump announced Kelly's departure Saturday as he was leaving the White House to attend the Army-Navy football game, adding that he would name Kelly's replacement "over the next day or two."

Kelly's departure means Trump will have a new top adviser by his side as he confronts a more perilous political climate. The president's team is simultaneously girding to deal with a Democratic-led House of Representatives, a bruising 2020 re-election campaign and political warfare over the coming report from Special Counsel Robert Mueller.

Kelly, a strong-willed former military commander, imposed a measure of discipline on Trump's free-wheeling, tumultuous presidency. The retired Marine general clamped down on access to the Oval Office and brought order to the West Wing, though the president's impulsive style still often prevailed.

Yet Kelly, 68, has no experience in electoral politics. Ayers, a 36-year-old former political consultant, is a veteran Republican operative.

Kelly is following other senior aides who have headed for the exits in recent weeks. White House counsel Don McGahn departed in October, and Attorney General Jeff Sessions was ousted the day after the Nov. 6 midterm elections.

Kelly, a former Trump secretary of homeland security, had committed in July 2018 to stay on as chief of staff through at least 2020. Trump had also asked him to continue in the job through 2024 if Trump were to be re-elected.

But there is little chemistry remaining between the president and Kelly, said people familiar with the matter.

Twice in the span of four months, Kelly denied reports that he'd called the president an 'idiot,' including one account in journalist Bob Woodward's book about the Trump administration, which was released in early September. Woodward wrote that Kelly often lost his temper and told colleagues that Trump was 'unhinged.'

'He's an idiot. It's pointless to try to convince him of anything. He's gone off the rails. We're in Crazytown. I don't even know why any of us are here. This is the worst job I've ever had,' Kelly vented in one meeting, according to Woodward.

After excerpts of the book appeared, Kelly said in a statement that 'the idea I ever called the president an idiot is not true.' He added that Trump "and I both know this story is total BS."

Kelly seemed in many ways a perfect fit to lead Trump's White House. The president has repeatedly filled high-level posts with retired generals, and Kelly's hard-line views on immigration also squared with those of his boss.

Kelly weathered criticism for his handling of domestic violence allegations that forced out staff secretary Rob Porter in early 2018.

But his instinct to limit access to Trump, especially by the president's expansive orbit of friends and informal advisers, irritated Trump and made Kelly enemies.

The controversy over Porter wasn't Kelly's only setback. He had a knack for incendiary public remarks, especially about immigrants and minorities.

Kelly's comments in May 2018 about the separation of migrant children from their parents were criticized as insensitive, after he told NPR that family separations were a 'tough deterrent' and that children 'will be taken care of – put into foster care or whatever.'

Three months earlier, he told reporters on Capitol Hill that some undocumented immigrants brought to the country as children were “too lazy” to sign up for a program protecting them from deportation.

In 2017, he described Representative Frederica Wilson, a black Democrat, as an "empty barrel" after she criticized Trump's phone call to the mother of a soldier killed in an ambush in Niger. Kelly also inaccurately described one of Wilson's speeches.

Kelly drew criticism for his relationship with Congress, and especially his involvement in a failed immigration deal. Senators of both parties charged that he pushed his boss to renege after Democrats believed they had reached agreement on an outline for legislation.

Kelly also admitted alerting lawmakers and staffers with hard-right views on immigration before one meeting between Trump and more moderate lawmakers.

Kelly's exit compounds the sense of flux in an administration in which three communications directors, a national security adviser and a press secretary exited the White House in just over a year, along with many lower-level aides.

The president's staff largely comprises aides who survived a purge Kelly initiated early in his tenure that forced out prominent figures including Steve Bannon and Omarosa Manigault Newman.

'All Is True' Trailer: What Happens After Shakespeare Retires?