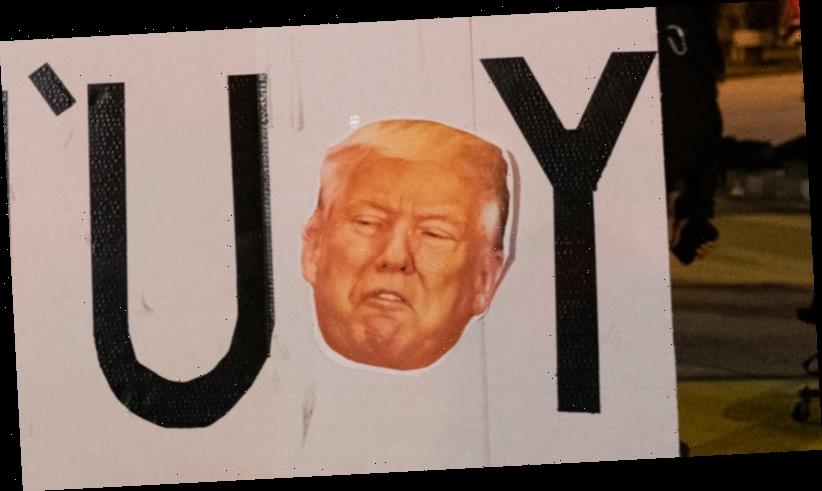 Depending on your politics, you can call this election result whatever you want. Call it catastrophe, or catastrophe averted. Call it vindication or abomination. What you cannot call it is repudiation.

That’s mostly a problem for those who were cheering on a Biden landslide, which was really only ever code for a thorough, history-correcting repudiation of Trumpism. That has emphatically not happened. History is not being corrected because Trump is not an aberration. We know this now. 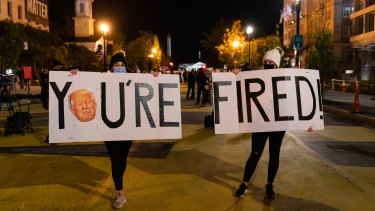 Protesters in Washington DC on the day after the election.Credit:Bloomberg

One of the most underestimated features of this election is that, unlike 2016, it is a mass-turnout event. Trump winning a low-turnout affair is conceivable – he wins because his loyal followers turn up while much of the country doesn’t – but to be highly competitive in the highest turnout in over a century?

There can’t be millions of true believers who didn’t turn up in 2016. We’re looking at something now baked into the system itself. It’s not just that the country is polarised. It’s that almost nothing seems able to shift it.

We need a better word than polarisation because that just implies serious disagreement.

We’re beginning to see something much bigger than that: people who inhabit completely different worlds. These sides do not merely object to one another, they simply fail to comprehend how the other can even exist.

That’s most obviously true of progressives, who continue to express shock at the level of Trump’s support, even though they’ve had four years to get used to the fact.

But it’s also true of Trumpists who, as I write this, cannot believe that Trump’s lead in key states began to evaporate once postal votes were being counted, despite the fact that just about everyone predicted that would happen weeks out.

Here we must obviously cite Trump’s complete disregard for truth in his attitude to just about everything, from the size of his own inauguration crowd to the realness of COVID-19 to the idea of a stolen election.

The most accurate description of Trump is the one we most quickly abandoned: post-truth. Remember that? The point isn’t that he misrepresents facts. It’s that facts are just irrelevant. All that matters is the narrative and how you feel about it.

Progressive forces have been doing this in more subtle ways, too. That’s why there is progressive bewilderment that Trump has done well with the Latino vote, for example.

That can only be a surprise when you start with the axioms of today’s progressive politics: that Trump is a racist, that people of colour exist as a politically meaningful group, and that this identity means they could never vote for a racist.

But, actually, “Latinos” include massively divergent groups, including Cubans and Venezuelans who care much more about the threat of “socialism” than any discourse of racism. That fact has been discoverable for decades, but only Trump seemed to grasp it. So he exploited it and these voters smashed Biden in Florida.

Similarly, recall Buzzfeed’s publication of the “Steele dossier”, an unverified opposition research document that purported to detail Trump’s collusion with Russia. It’s not the publication of a blatant lie in the Trump style, but it happily disseminates unverified information that was generated for a political purpose.

This sort of thing happens because a story is set and “facts” are constructed to suit them. Trump’s story here is of a ceaseless witch-hunt. The progressive story is of a president so one-dimensionally evil that we can pretty much believe whatever is said about him if it fits that description.

No doubt, a figure like Trump makes contempt appealing. But this contempt inevitably spreads to his supporters, not just him. The effect is not to make him accountable. It is to make his politics consequence-free.

He can adopt legendary levels of dishonesty and incompetence – even in the deadly context of a pandemic – and it can all be subsumed by his grander narrative of the witch-hunt against him. Either the pandemic isn’t real, or it is and he’s done a good job, or it’s just unimportant. In a way, Trump is the world’s first major post-modern politician: subordinating notions of objective truth to a narrative of anti-elite resistance. That’s how someone with his track record can even come close.

Democracy does not work where divisions become calcified in this way. Its whole aim is to balance stability and fluidity.

By allowing for change at frequent intervals, it delivers stable transitions from one government to another on the understanding that both victory and defeat are only ever temporary. This lowers the stakes of any given election, and allows us to avoid a kind of “winner takes all” politics in which even the most basic institutions of government can be sacrificed for the sake of winning.

But that only works if people have faith that persuasion and deliberation are possible, that despite our disagreements we’re starting from a loosely agreed set of facts, and that the other side is even worth engaging. America has dismantled all of these things.

Once the terms of democratic combat become so mutually exclusive, winners really do take all. That takes us to a place with almost no firm principles – not even foundational democratic ones – evidenced by Trump’s current campaign to stop actual votes being counted.

It is optimistic to think this would somehow disappear upon Trump’s exit. This mode of discourse, led by the story you want to tell rather than the facts you assemble, has been building for years.

It is aided significantly by the fracturing and splintering of our news services, by journalism’s fight for survival.

Trump once said Twitter was the reason he could achieve what he did, and he’s probably right. Trump didn’t invent this approach. He’s just better at it than anyone else: a post-truth man for a post-truth world. What we might be about to discover is that it’s a very short trip from post-truth to post-democracy.

Waleed Aly is a regular columnist.

'The Marvelous Mrs. Maisel' Star Rachel Brosnahan Only Kept 1 Costume From 3 Seasons of the Show

Guess Who This Cool Kid Turned Into!
World News