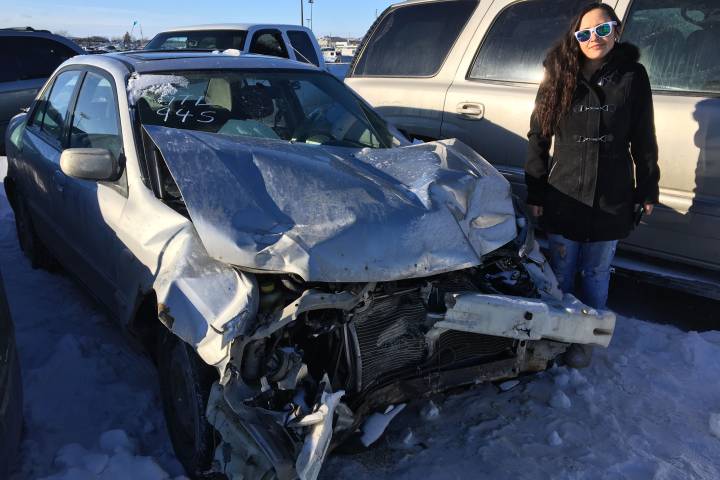 Surveying the damage, Alicia Bell feels lucky to be able to talk about the crash that turned her car into a wreck.

Shortly before midnight on Monday, Bell was driving home from work on Main Street when she says a red or burgundy truck ran a red light on Inkster Boulevard, crashing into her.

“I remember going through the intersection and seeing him turn and panic and try and slam on my brakes,” she said.

“I’m pretty sure I slid from all the snowfall that night. I remember the first impact and it was pretty hard.”

The air bags went off and the window beside her shattered, said Bell.

“I was stuck in the vehicle so I couldn’t get out and I started panicking,” she said.

“There was no one around right at first, so that was really scary. The engine was smoking and making noises.”

A taxi driver spotted the scene and came over to help her out of the crumpled car, but the truck had disappeared.

“When an accident is caused by you and you just flee, I don’t know how you could just flee and not worry about the other person.”

Bell is just left with bruises but she’s also pregnant and worried about her unborn baby.

“I am seeing my OB to be monitored for about a week or two to make sure everything is OK with the baby,” she said.

“Once I can see the baby is healthy in my arms that’s probably when I’m going to be OK with everything.”

Bell hopes someone will remember something from the crash and come forward.

The Winnipeg police are looking into the case but in Manitoba there are 14,000 hit-and-run cases every year, according to Manitoba Public Insurance.

Spokesperson Brian Smiley says most of them happen in parking lots.

“There’s a large volume of vehicles parked in a relatively small area. Someone’s backing up and backs into a bumper and they drive away. If someone does that they should leave their name and phone number so that owner of the damaged vehicle can contact you later,” he said.

Man City's draw lowest attendance of the season with just 32,089 there to see them crush Burton