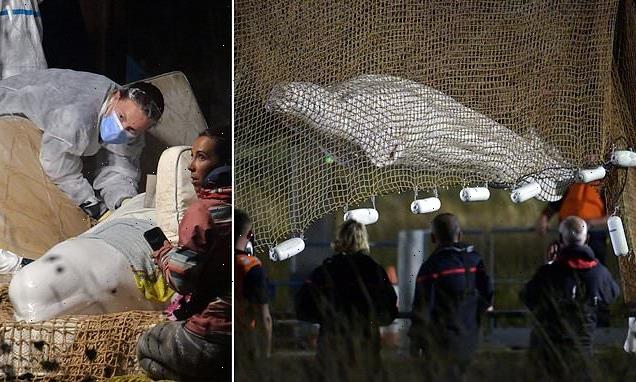 Tragedy as 1,800-pound beluga whale that got stranded in the Seine dies after being fished out of river using a crane in epic six-hour rescue operation

The beluga whale stranded miles downstream from Paris was euthanised by vets as it suffered breathing difficulties while being transported back to sea.

Animal welfare workers and firefighters spent six hours last night lifting the giant sea mammal from the River Seine with the intention of placing it in the English Channel.

But it was euthanised during the road journey as its health failed to recover.

‘Despite an unprecedented rescue operation for the beluga, we are sad to announce the death of the cetacean,’ the prefect of the Calvados department wrote on Twitter. 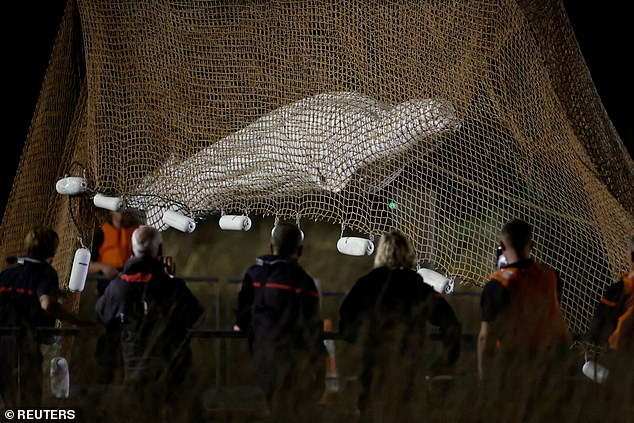 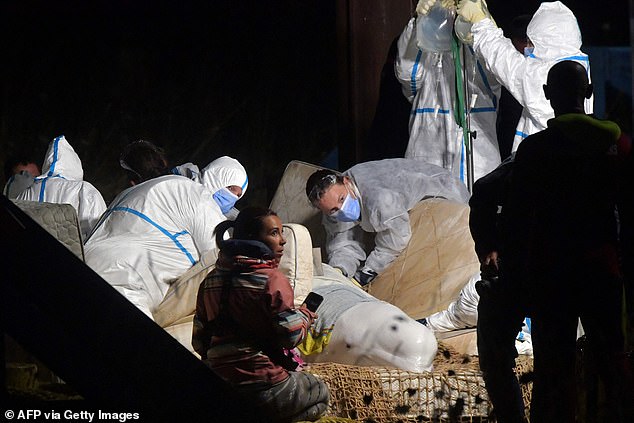 It’s not known exactly how vets euthanised the 13ft, 1,800lb whale (pictured during the rescue) 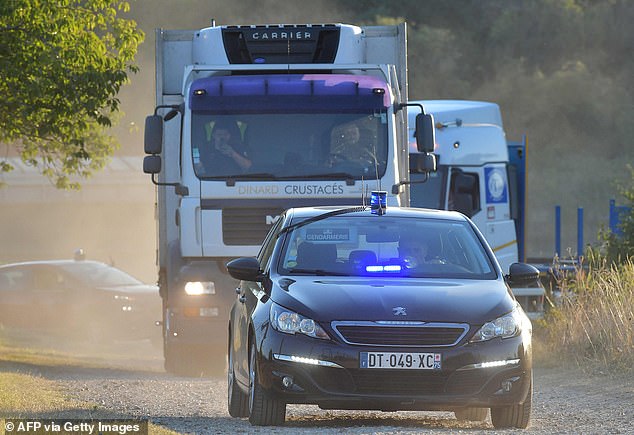 Rescuers took the whale from the Seine at 2am and hoped to release it into the open sea. Pictured: a police vehicle escorts a refrigerated truck carrying the beluga whale out to sea 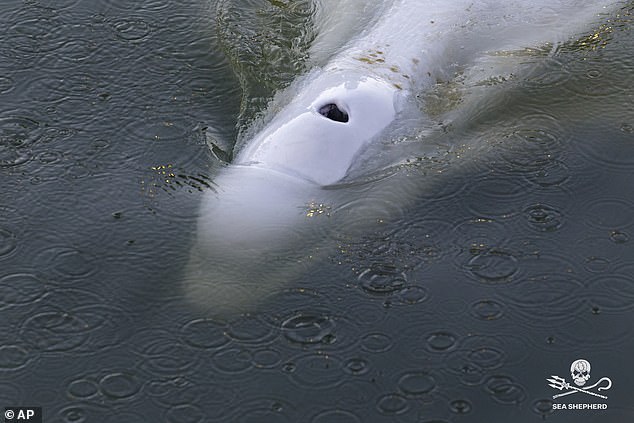 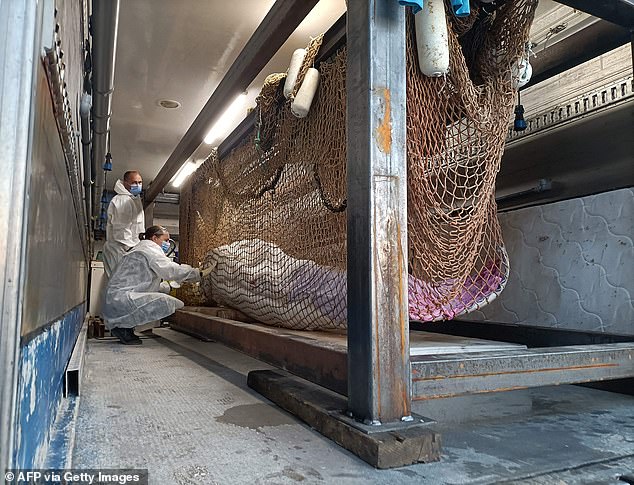 The 1,800lb sea mammal was hoisted into the refrigerated truck early this morning, but died

Late last night it was lifted onto a refrigerated truck and driven to an undisclosed seawater basin in what French authorities called an ‘unprecedented’ operation.

The animal’s journey 80 miles inland was blocked by a lock at Saint-Pierre-La-Garenne in Normandy.

Its health has deteriorated after it refused to eat, with authorities even considering injecting the gigantic sea mammal with vitamins to keep it alive. 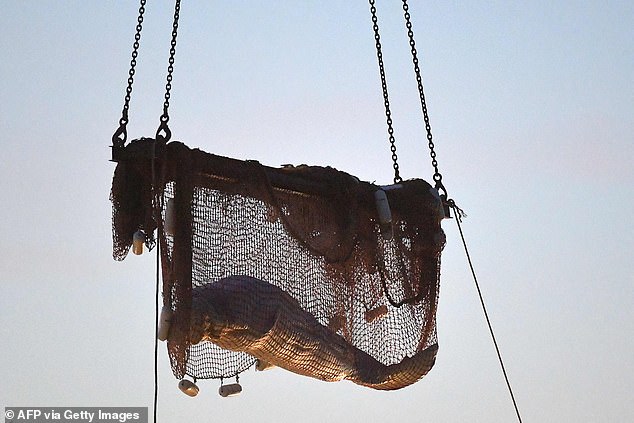 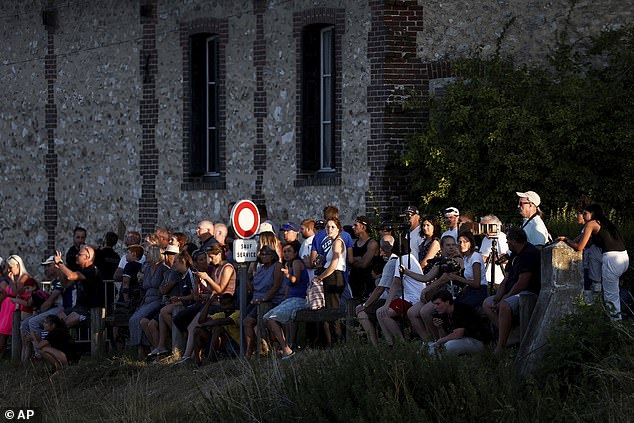 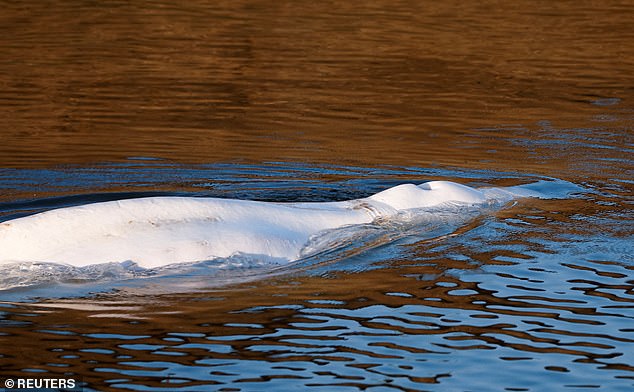 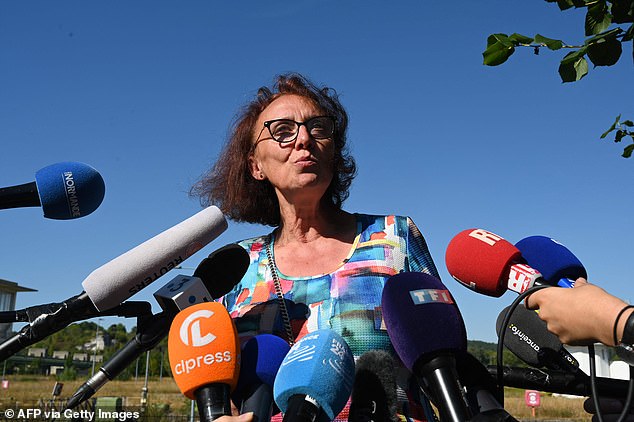 Brasseur led a Marineland team sent to assist with the rescue, alongside the Sea Shepherd France NGO.

‘What’s exceptional is that here the banks of the Seine are not accessible for vehicles… everything is going to have to be done by hand,’ Brasseur said.

So far the beluga has not turned around, and experts have dismissed any attempt to ‘nudge’ it back toward the English Channel with boats, saying it would stress the weakened animal and probably be futile in any case.

Interest in the beluga’s fate has spread far beyond France, generating a large influx of financial donations and other aid from conservation groups as well as individuals, officials said.

Sea Shepherd on Monday issued an appeal in particular for heavy-duty ropes, nets, mattresses and other equipment.

Belugas are normally found only in cold Arctic waters, and while they migrate south in the autumn to feed as ice forms, they rarely venture so far.

According to France’s Pelagis Observatory, specialised in sea mammals, the nearest beluga population is off the Svalbard archipelago, north of Norway, 3,000 kilometres from the Seine.

The trapped whale is only the second beluga ever sighted in France. The first was pulled out of the Loire estuary in a fisherman’s net in 1948.

In late May, a gravely ill orca swam dozens of miles up the Seine and died of natural causes after attempts to guide it back to sea failed.

In September 2018, a beluga was spotted in the River Thames east of London, in what was then the most southerly sighting of a beluga on British shores.

Perfectly ROUND egg is laid by rescue hen called Twinskie