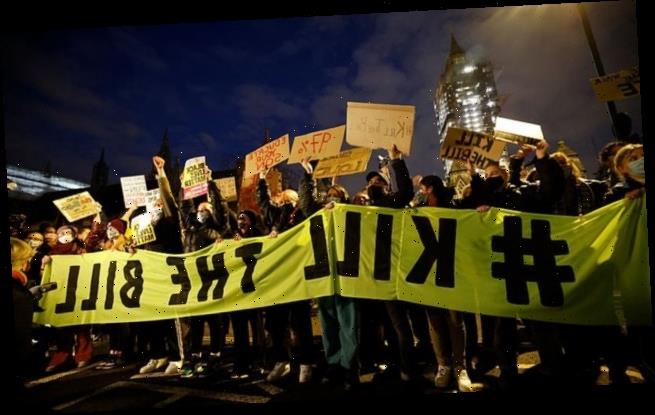 MPs will vote this evening on controversial new laws to give the police more powers to crackdown on protests amid growing Tory unrest at the proposals.

The Police, Crime, Sentencing and Courts Bill includes plans to enhance the ability of police to combat non-violent protests which cause significant disruption to the public or on access to Parliament.

The draft legislation includes an offence of ‘intentionally or recklessly causing public nuisance’.

Someone will be judged to have committed this crime if they cause ‘serious harm to the public’, which can include ‘serious annoyance, serious inconvenience or serious loss of amenity’, with those convicted potentially facing a fine or jail.

The ‘serious annoyance’ element of the criteria has prompted a furious backlash from critics who warn the laws could pose a threat to free speech rights and the right to protest.

There is growing concern among some Tory MPs at the extent of the proposed powers as they warned the ‘fundamental right to protest’ must be protected. 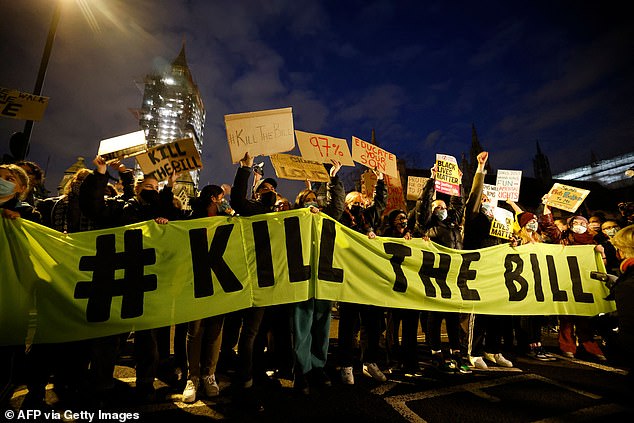 Protestors hold placards in Parliament Square last night as they demonstrate against the Government’s Police, Crime, Sentencing and Courts Bill 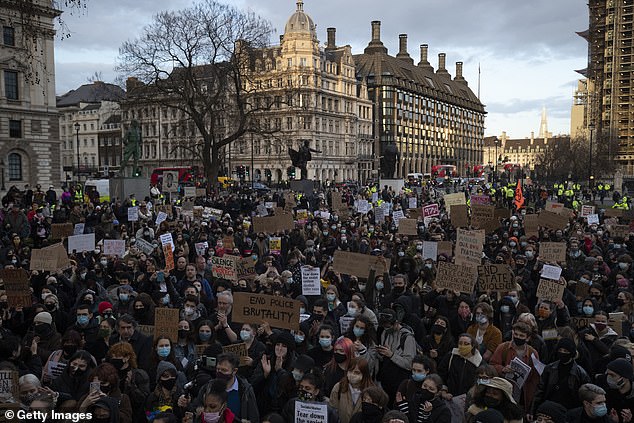 The passage of the Bill through the Commons comes amid an ongoing backlash over the policing of the Sarah Everard vigil at the weekend.

Steve Baker, Tory MP and former Brexit minister, and Dominic Grieve, the former Tory attorney general, said in a joint article for the Conservative Home website that the ‘events on Clapham Common were a disaster for the image of policing by consent’.

They said it was a ‘vivid illustration of the consequences of the enactment of bad law’ as they argued MPs ‘must learn the right lessons from this as we consider the Police, Crime, Sentencing and Courts Bill’.

Addressing the wider issue of disruptive protests, the pair said that ‘the willingness of contemporary protestors to use non-violent mass law breaking to pursue political ends by bringing our cities to a halt… cannot just be ignored’.

They said that if current police powers are ‘insufficient… then this may justify changing the law’.

They added: ‘But in doing so MPs must uphold the fundamental right to protest along with the rights and freedoms of those whose lives may be seriously disrupted by such demonstrations.’

The pair argued that parts of the Bill ‘may create uncertainty by giving far too much discretion to the police in determining this balance’.

The wide-ranging Bill also includes plans to bring in tougher sentences for child killers and those who cause death on the roads, longer jail terms for serious violent and sexual offenders, and expand child sex abuse laws to ban religious leaders and sports coaches from having sex with 16- and 17-year-olds in their care.

The Bill could also see the maximum penalty for criminal damage of a memorial increased from three months to 10 years. 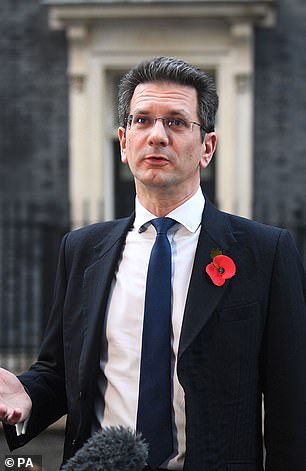 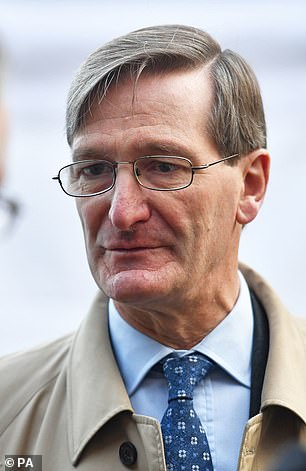 Labour’s decision to vote against the Bill prompted Amanda Milling, the co-chairman of the Conservative Party to blast: ‘It is shocking that Labour is trying to block tough new laws to keep people safe, including many vital measures to protect women from violent criminals.

‘By voting against this Bill Labour are voting against tougher sentences for child murderers and sex offenders, killer drivers and measures that protect the vulnerable.’

Labour’s Jess Phillips, shadow minister for domestic violence and safeguarding, hit back and said the Bill is ‘full of divisive nonsense’.

She said of Ms Milling’s comments: ‘This is a disgusting and untrue statement.

‘The Conservative Government’s Bill does absolutely nothing currently to increase sentences for rapists, stalkers, or those who batter, control and abuse women. It does nothing about street harassment and assaults.’

Yaphet Kotto, Star of 'Alien' and 'Homicide: Life on the Street,' Dead at 81
World News