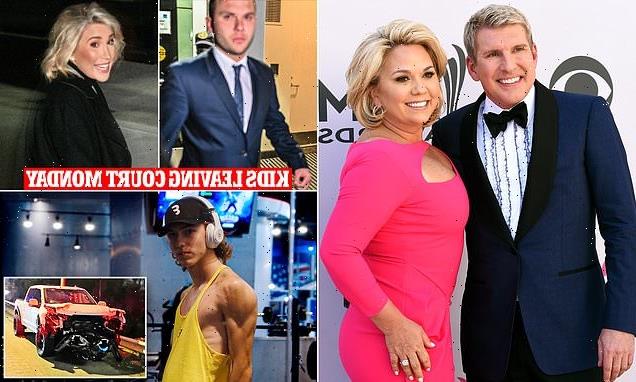 Todd Chrisley is sentenced to 12 YEARS behind bars for $30m tax fraud, while wife Julie is hit with a seven-year stretch, days after couple’s son, 16, was seriously injured in car crash

Reality stars Todd and Julie Chrisley have been sentenced to 12 years and seven years in prison respectively – months after they were found guilty in their $30million tax fraud case.

The couple, best known for TV show ‘Chrisley Knows Best,’ were sentenced in Atlanta on Monday to a combined total of 19 years in jail – less than two days after their son was seriously injured in a car crash in Nashville.

Todd, 53, and Julie, 49, will also serve 16 months of probation each upon their release. It’s understood that their reality show, as well as a spin off planned to center around their children, has now been canceled.

The news comes five months after the Chrisleys were found guilty on criminal bank fraud and tax evasion charges, as prosecutors said they took out $30 million in fraudulent bank loans.

Prosecutors said the couple used the money to fund their lifestyle, even before they had become reality stars.  Todd and Julia also used a production company to hide income from the IRS, lawyers argued.

During the dramatic trial earlier this year, a shocking testimony given by Chrisley’s former employee-turned-lover Mark Braddock revealed that he had a year-long gay affair with the reality star in the early 2000s – while they were both married to their respective wives.

Braddock sensationally turned against his ex-lover and business partner on the stand, when he told the jury that he had not only been witness to the Chrisleys’ crimes, but had helped to commit them.

His testimony also saw him confessing not only to his role in the Chrisleys’ years-long fraud, but to his infidelity, which he is said to have kept hidden from his wife for years before revealing it all to the world on the stand. Braddock was granted immunity in return for testifying. 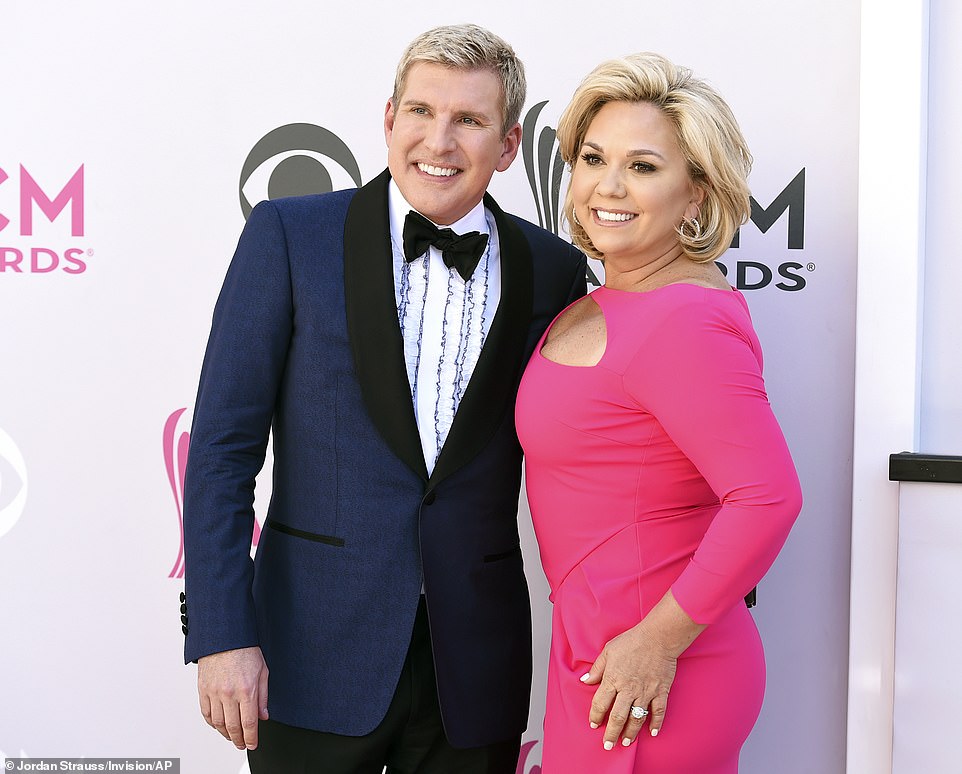 Todd and Julie were found guilty on federal charges in June and have been sentenced to 12 years and seven years in prison, respectively 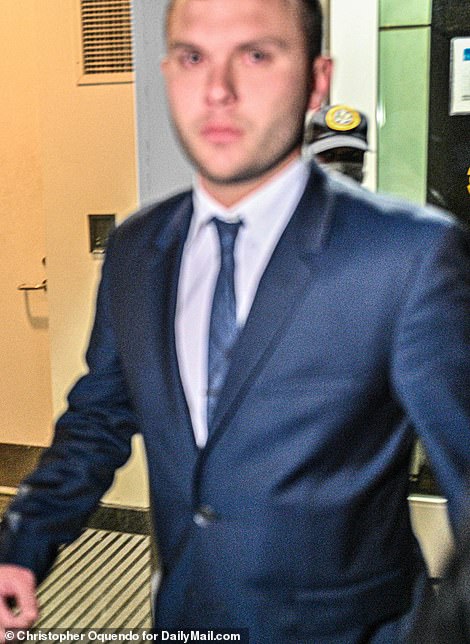 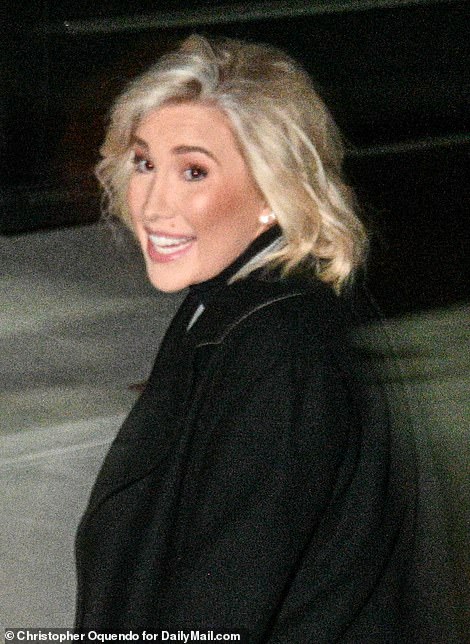 Two of Todd and Julie’s children, Chase Chrisley (left) and Savannah Chrisley (right), were spotted outside the courthouse where their parents were sentenced late Monday evening 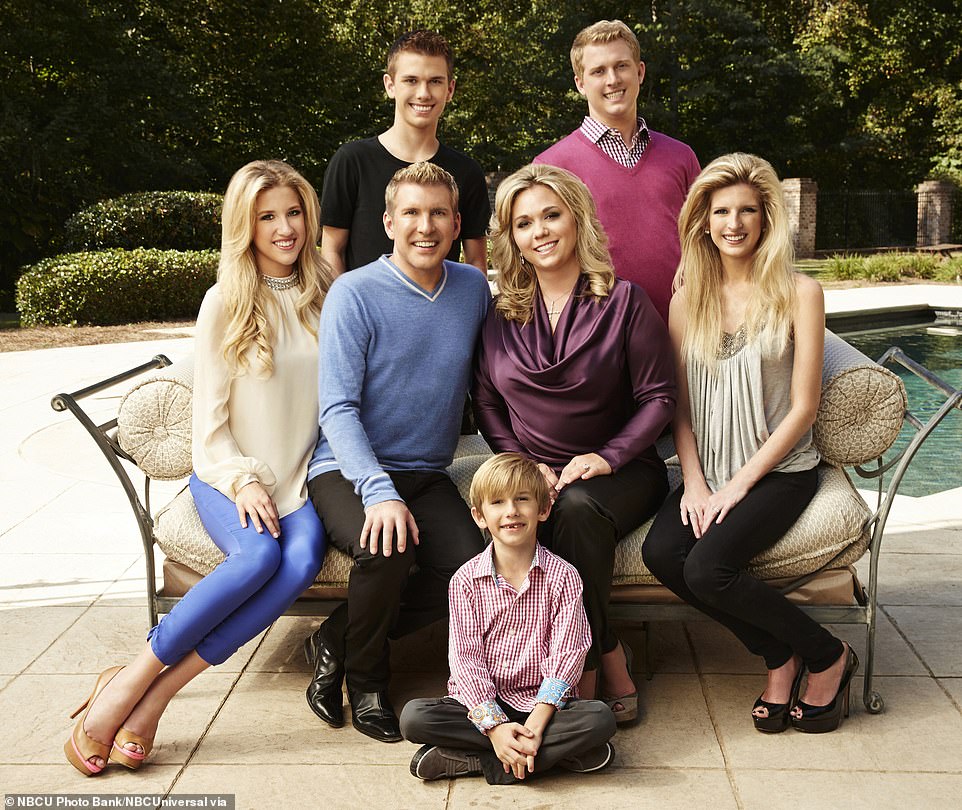 On his USA series Chrisley Knows Best, Chrisley has documented his life as a dedicated father to his and Julie’s five children Lindsie, 32; Kyle, 30; Chase, 25; Savannah, 24; and Grayson, 16

Before Monday’s sentencing, officials had stated that Todd was facing up to 22 years while Julie could have served up to 13.

Julie was also charged with wire fraud and obstruction of justice.

Throughout their legal troubles, the Chrisleys maintained they had done nothing wrong.

They claimed that someone else had been in charge of their finances, and therefore responsible for any and all crimes committed.

Chase and Savannah were spotted leaving the Richard B. Russell Federal Building in Atlanta, Georgia, on Monday evening after their parents’ sentencing. 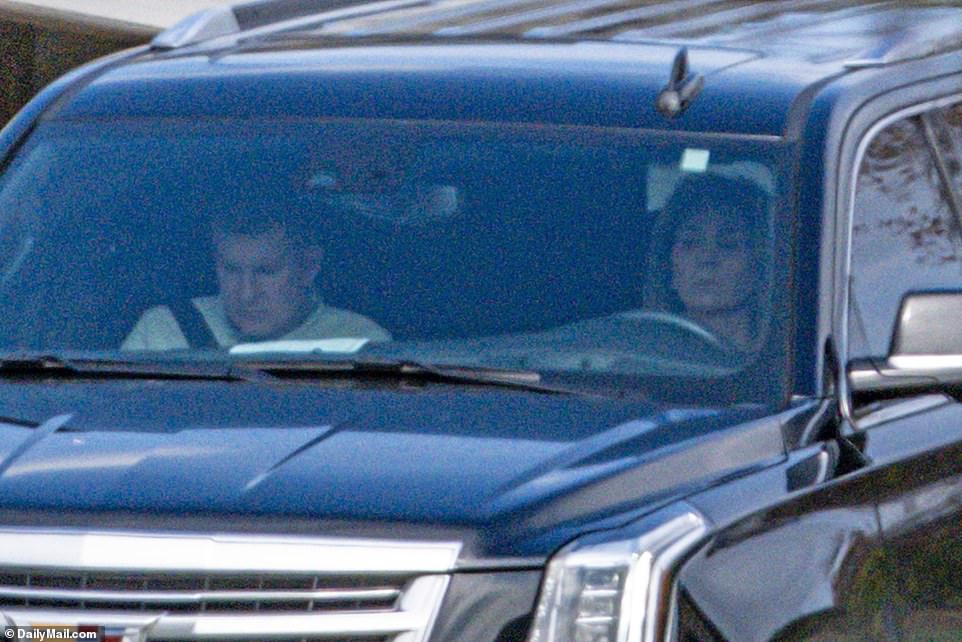 The couple were snapped emerging from their Brentwood, Tennessee mansion Friday in their black Cadillac Escalade 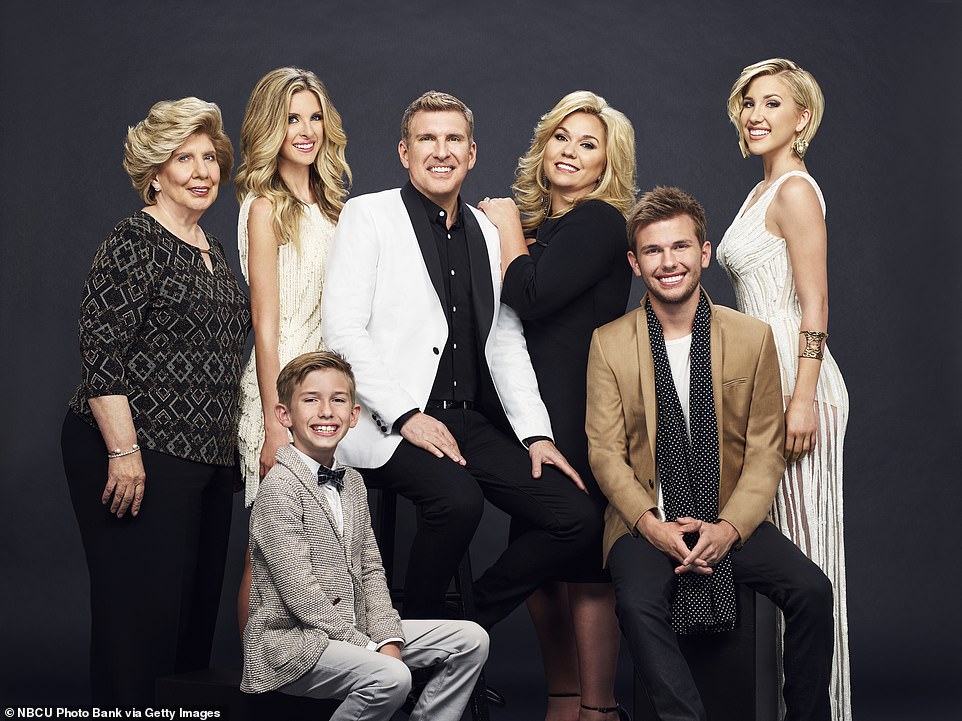 Todd and Julie’s accountant, Peter Tarantino, was also sentenced Monday to 36 months in prison. He was facing up to 41, while his attorneys had asked for just 18.

Tarantino had also been found guilty of conspiracy to defraud the IRS and willfully filing false tax returns.

The Chrisleys submitted a false document to a grand jury investigating their crimes and then convinced friends and family members to tell lies while testifying under oath during their trial, prosecutors wrote earlier this year during their trial.

‘The Chrisleys are unique given the varied and wide-ranging scope of their fraudulent conduct and the extent to which they engaged in fraud and obstructive behavior for a prolonged period of time,’ prosecutors wrote.

Braddock, who revealed the couple’s fraud in court earlier this year, has been married to wife Leslie for more than three decades – with the couple celebrating their 35th anniversary on October 10, 2022, having tied the knot back in 1987.

Despite his testimony, she is said to be standing by her husband, with whom she shares two children.

In 2012, Braddock said Chrisley threw him out of his office and called the police, which caused Braddock to feel vengeful – and he eventually tipped off the FBI about Chrisley and his wife’s criminal activity.

On his USA Network series Chrisley Knows Best – which premiered in 2014 and is currently on its ninth season – Chrisley has documented his life as a dedicated father who was focused on raising a family with perfect manners and strong morals. 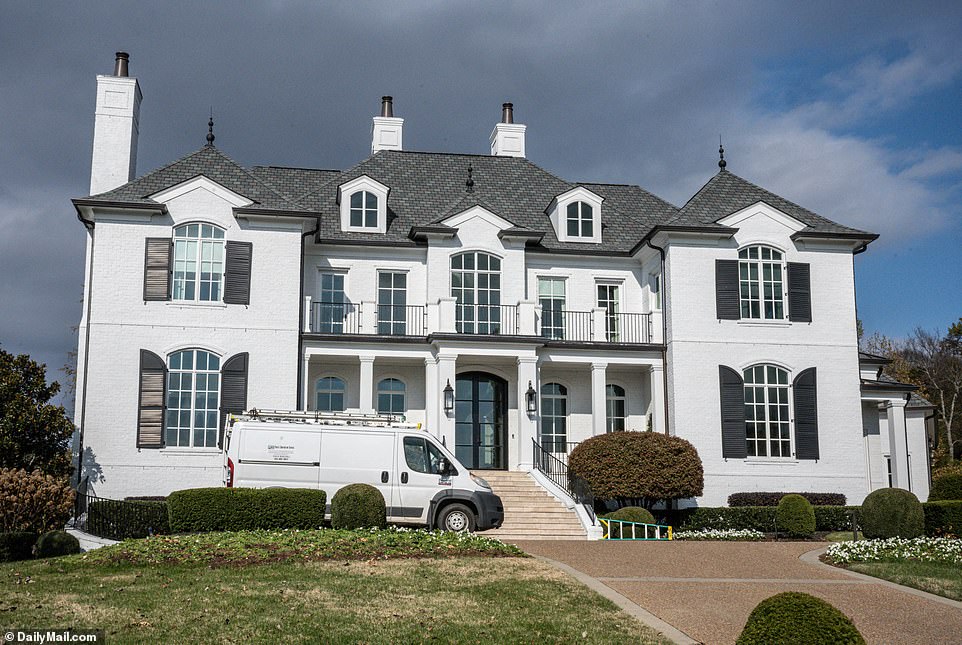 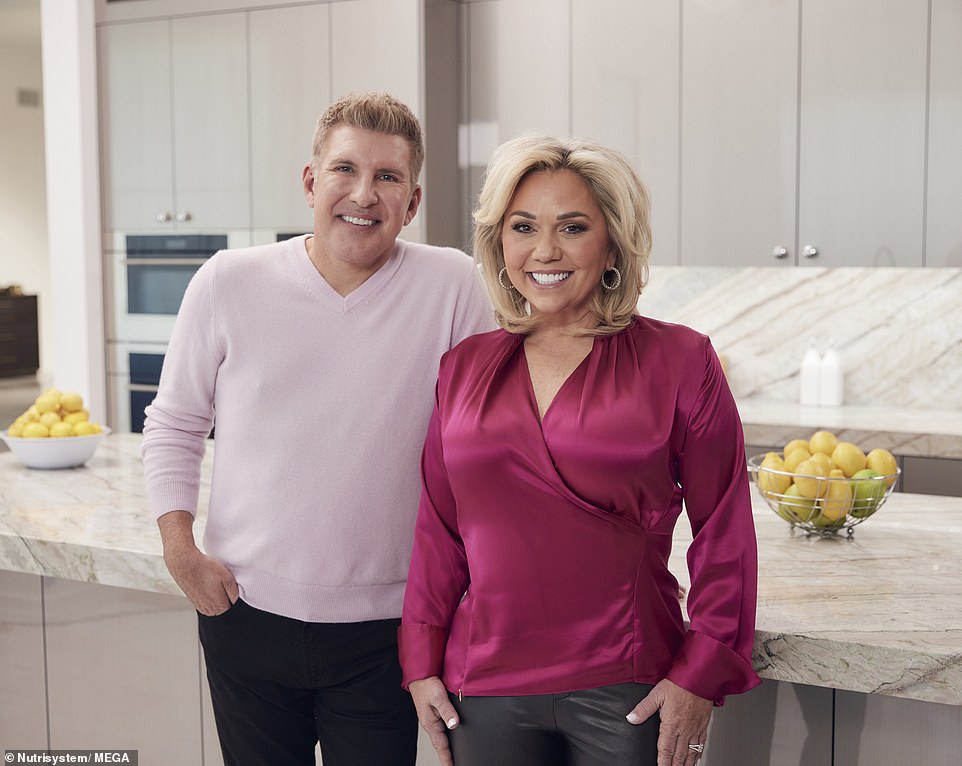 Todd and Julie (pictured) maintain they did nothing wrong, have referred to their conviction as a ‘shakedown’ 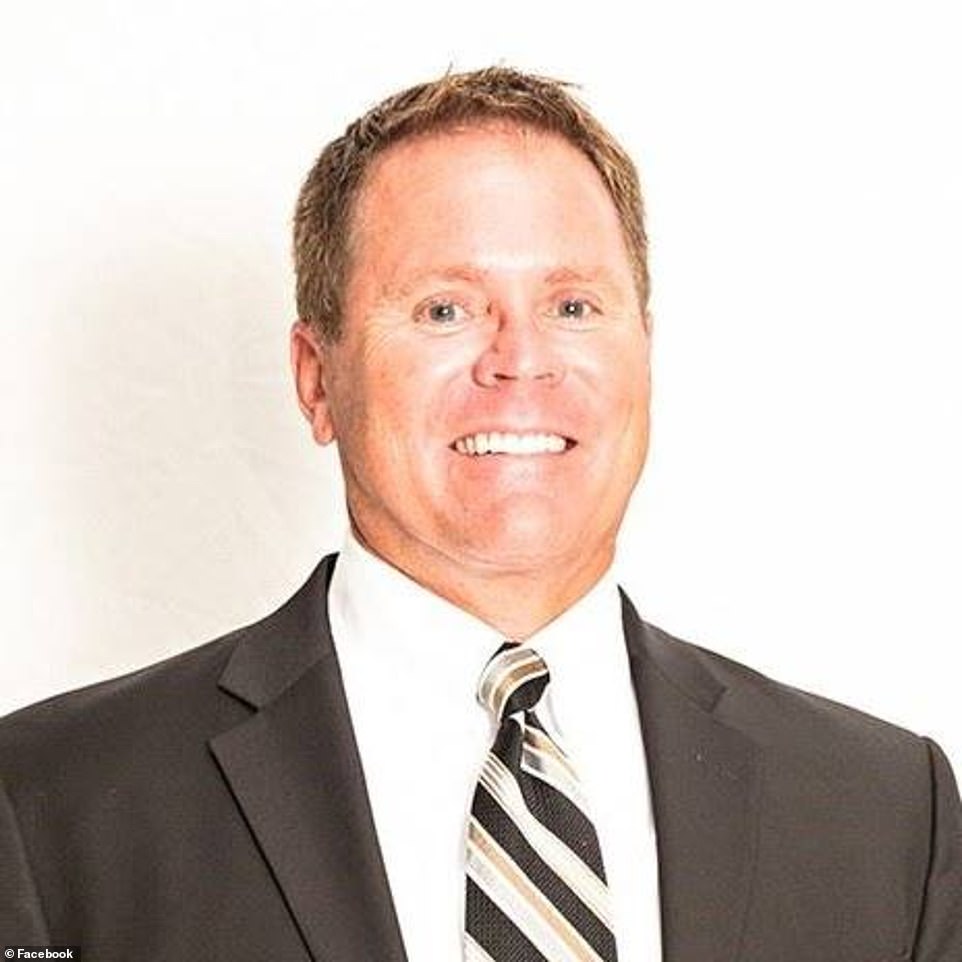 During the dramatic trial earlier this year, a shocking testimony given by Chrisley’s former employee-turned-lover Mark Braddock (pictured) revealed that he had a year-long gay affair with the reality star in the early 2000s – while they were both married to their respective wives

Their sentences come just days after their son, Grayson Chrisley, 16, was seriously injured in a car accident.

Grayson was driving his Ford F-150 on I-65 in Nashville, Tennessee on Saturday evening when he plowed into the back of a Dodge pickup truck during rush hour, police said.

Photos of Grayson’s totaled car obtained by TMZ showed the white truck completely damaged in the front with a broken windshield on the driver’s side.

Grayson was rushed to hospital with head injuries, and police said when they arrived on scene at 5.30pm he couldn’t remember what happened. The driver of the red Dodge pickup truck was also injured, but did not need medical treatment. 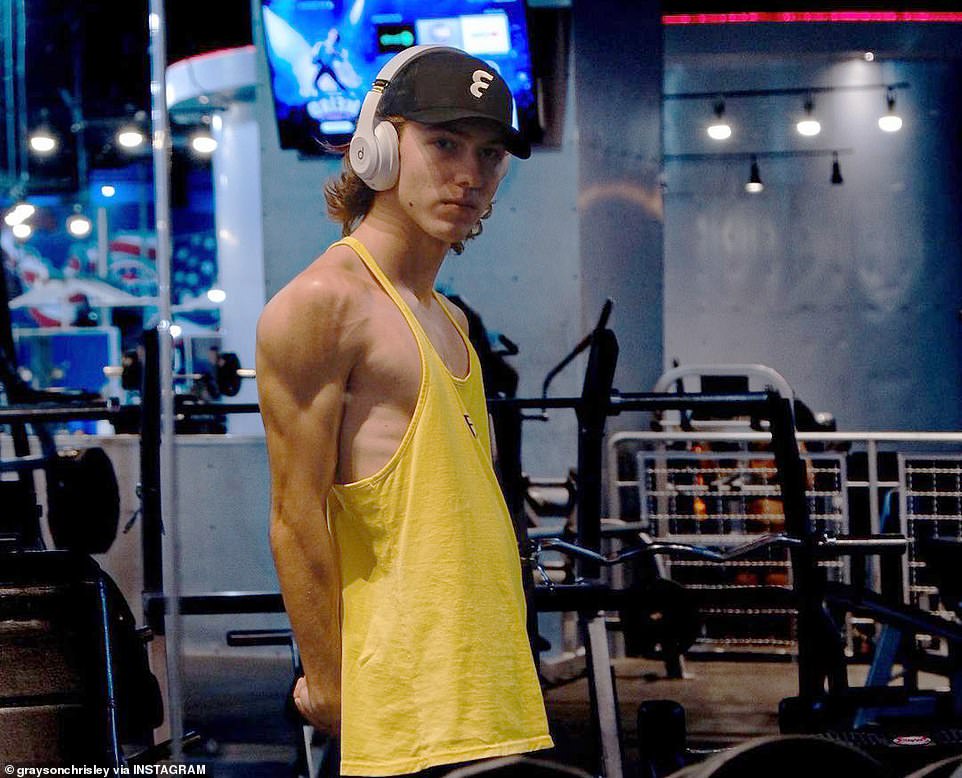 Reality star Grayson Chrisley, 16, is seriously injured after plowing his truck into another while in Nashville, Tennessee on Saturday 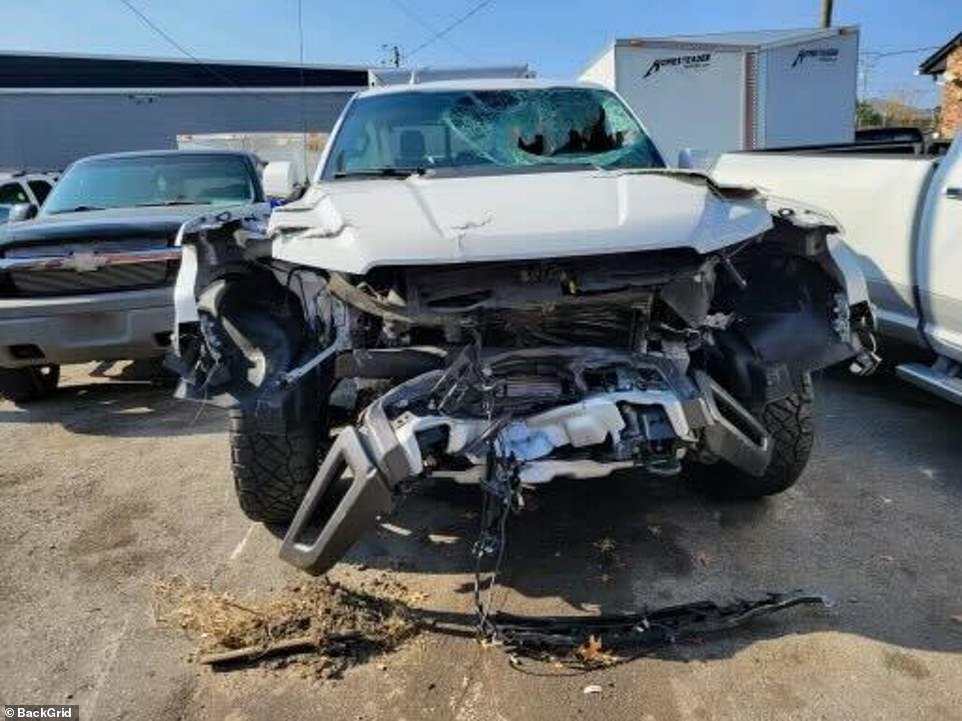 Grayson was on I-65 in his Ford F-150 when he went straight into a Dodge pickup truck at around 5.30pm 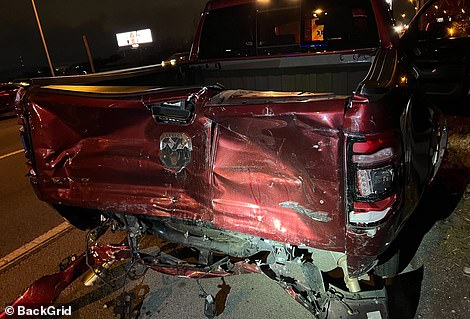 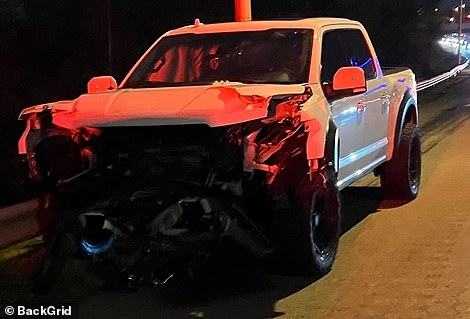 Grayson told police that he didn’t remember the accident and was rushed to the hospital in an ambulance. The driver of the red pick-up (right) he plowed into was also injured, but he did not need medical treatment 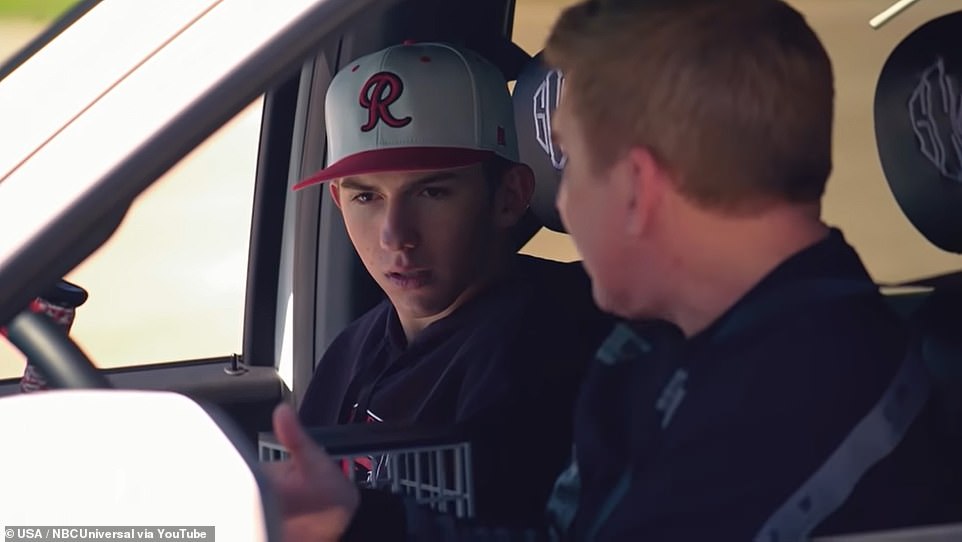 Pictured: Grayson and Todd inside a truck during an episode where the now 16-year-old learns how to drive

Before Monday’s sentencing, prosecutors said they would seek the harshest sentencing for the pair after they ‘built an empire based on the lie that their wealth came from dedication and hard work’.

‘The jury’s unanimous verdict sets the record straight: Todd and Julie Chrisley are career swindlers who have made a living by jumping from one fraud scheme to another, lying to banks, stiffing vendors, and evading taxes at every corner,’ prosecutors said in a court filing.

Todd’s lawyers wrote in a filing that he should not face more than nine years in prison and that the judge should sentence him below the lower end of the guidelines.

Julie’s lawyers wrote that a reasonable sentence for her would be probation with special conditions and no prison time. 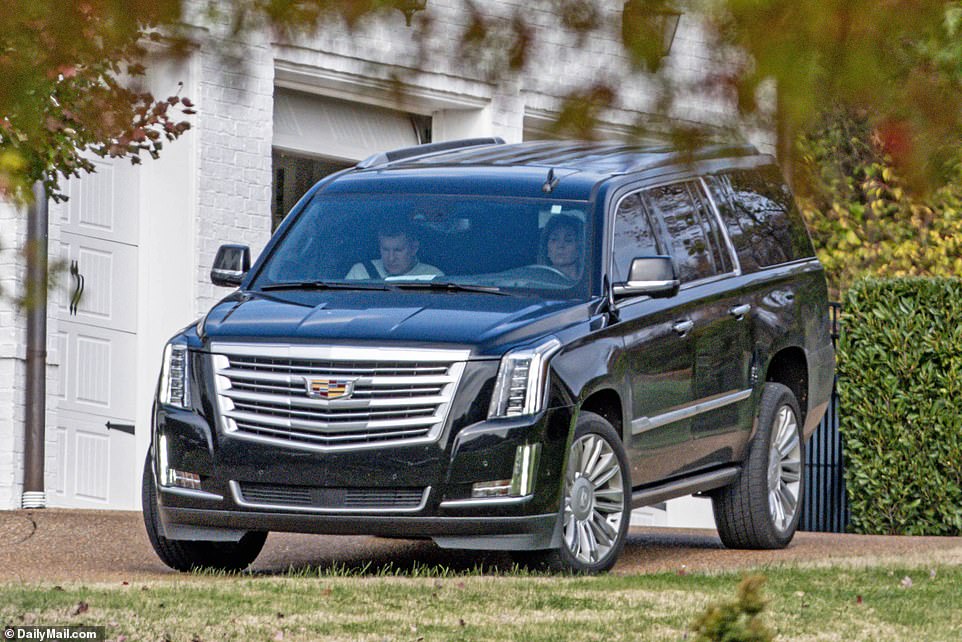 In June, a jury found the couple guilty of a years-long tax and banking fraud conspiracy that allowed them to borrow $30million by inflating their earnings. The pair were spotted looking glum as they left their $3.375 million home in Brentwood, Tennessee in a black SUV on Friday 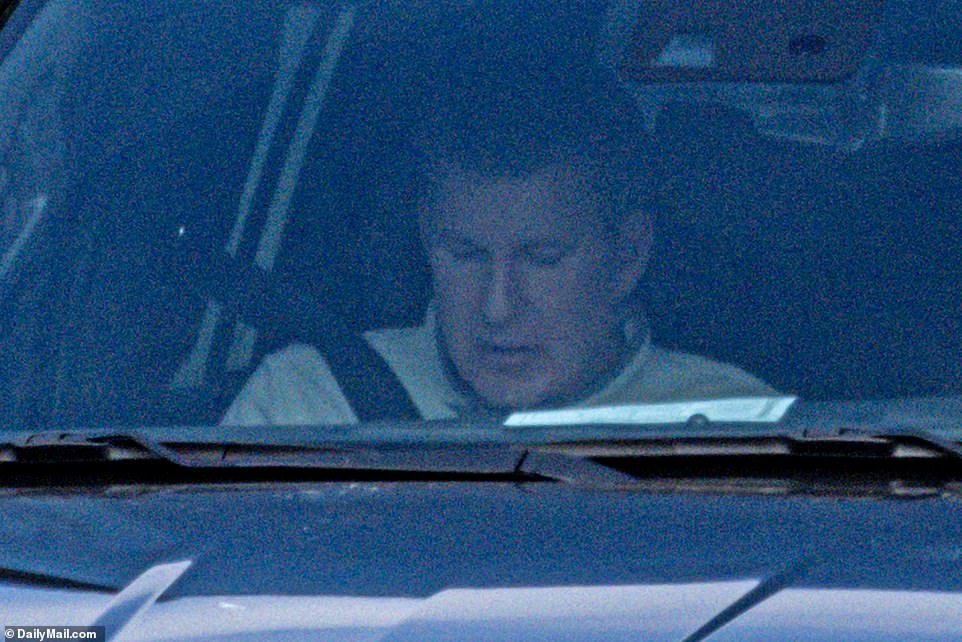 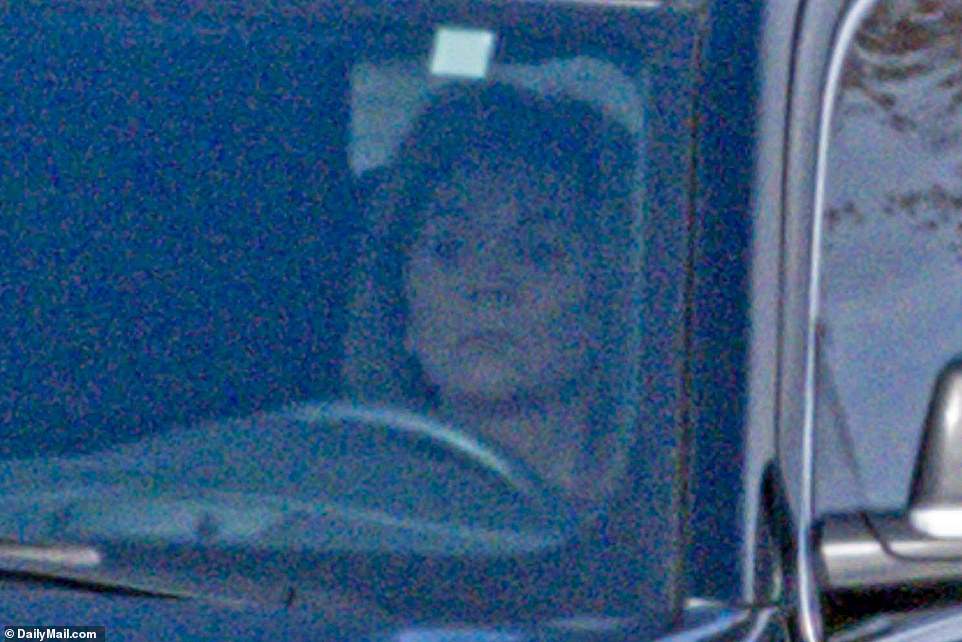 Julie, 49, appeared glum as she pulled out of the driveway with Todd, 53, in the passenger seat

Todd’s lawyers claimed in a court filing earlier this year that the government never produced any evidence that he meant to defraud any of the banks and that the loss amount calculated by the government is incorrect.

They also noted that the offenses of which he was convicted were committed a long time ago. He has no serious criminal history and has medical conditions that ‘would make imprisonment disproportionately harsh,’ they wrote.

His lawyers submitted letters from friends and business associates that show ‘a history of good deeds and striving to help others.’

People who rely on Todd – including his mother and the ‘scores of people’ employed by his television shows – will be harmed while he’s in prison, his lawyers wrote.

They urged the judge to give him a prison sentence below the guideline range followed by supervised release and restitution.

Julie’s lawyers wrote in a filing that she had a minimal role in the conspiracy and was not involved when the loans discussed in sentencing documents were obtained.

She has no prior convictions, is an asset to her community and has ‘extraordinary family obligations,’ her lawyers wrote, as they asked for a sentence of probation, restitution and community service.

The Chrisleys have three children together, including one who is 16, and also have full custody of the 10-year-old daughter of Todd Chrisley’s son from a prior marriage. Julie Chrisley is the primary caregiver to her ailing mother-in-law, the filing says.

Her lawyers submitted letters from family and friends that show she is ‘hard-working, unfailingly selfless, devoted to her family and friend, highly respected by all who know her, and strong of character. 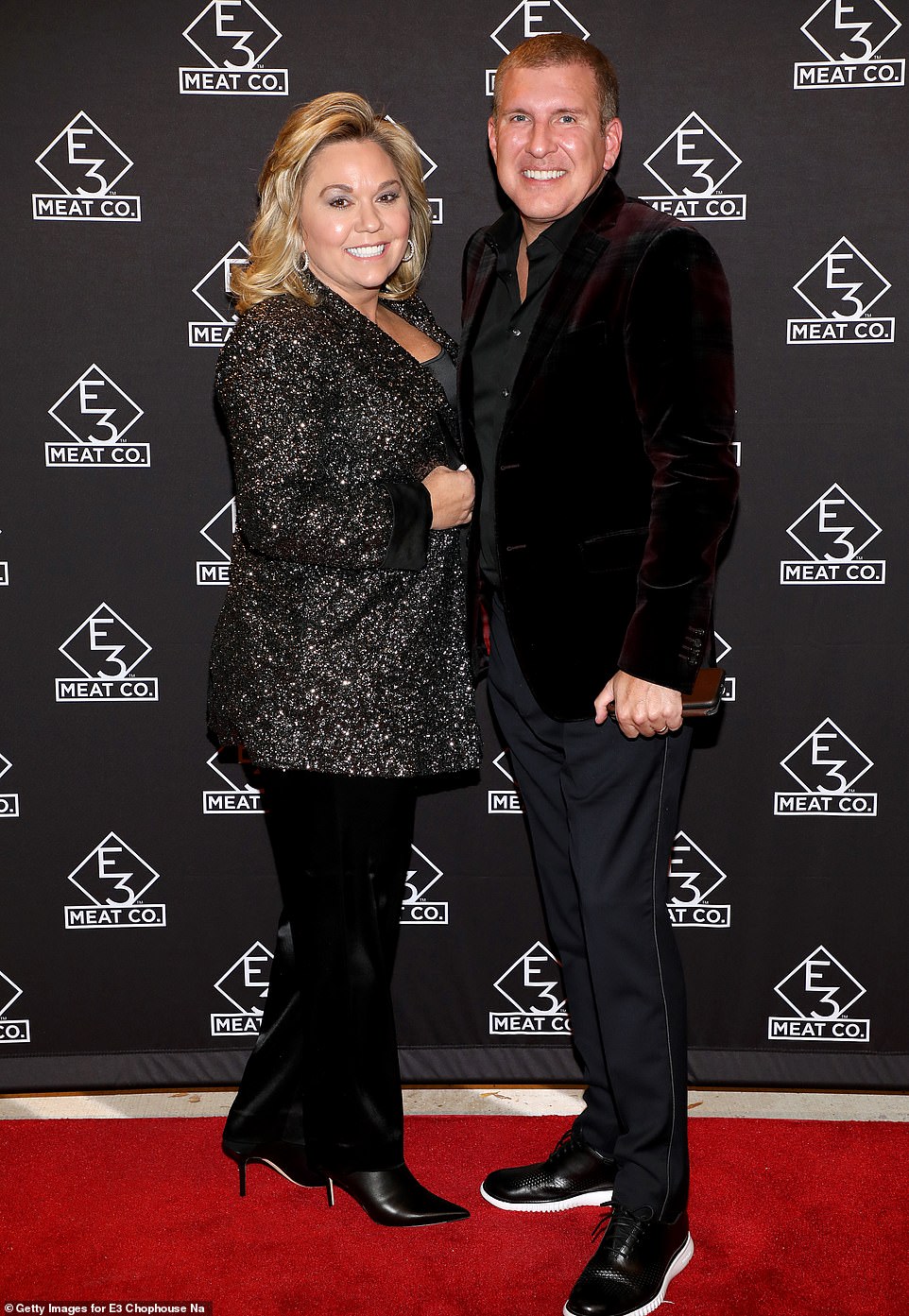