Tim Page, legendary Vietnam War photographer and counter-culture figure, has died from cancer at home in the hills of Bellingen in the Mid North Coast of NSW on August 24. He was 78 years old.

Page found fame as one of the “young Apaches of the Press Corp”; freelancers who covered the wars of Indochina – Vietnam, Laos and Cambodia – during the 1960s and 70s. He would cover many other wars in his time, from Israel to Bosnia and Afghanistan, as well as the aftermath of war in places like East Timor and the Solomon Islands. 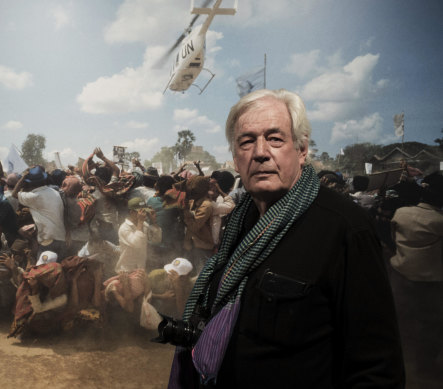 Tim Page in front of one of his images.Credit:Stephen Dupont

He was born in Tunbridge Wells in Kent, England in 1944 and raised by a foster family after his father, a merchant sailor, went down in the north Atlantic when his ship was sunk by a German U-Boat during World War II.

Page was badly wounded four times in Vietnam, and was mentioned in various “dispatches”; both official army dispatches and he also featured prominently in perhaps the best reportage account of the Vietnam War, Dispatches by Michael Herr. Herr did the narration for Francis Coppola’s film Apocalypse Now and based the crazy photojournalist at the end of the river with Kurtz (played by Marlon Brando) on Page (played by Dennis Hopper). He would later be played by Iain Glen (of Game of Thrones fame) in an Australian production called Frankie’s House, based on the house Page shared in Saigon with other correspondents.

Yet he also said “the only good war photograph is an anti-war photograph”. Page’s persona would bounce between these realms for the rest of his life; one part rock’n’roll war photographer, one part peace ambassador decrying war and suffering.

He was a humanist, first and foremost, always alive to the power of photography and art to change perceptions and highlight the folly of war. It was Page’s disgust at the Vietnam War that saw him become friends with disillusioned vets like Ron Kovic (Born of the 4th of July), supporting their protests.

It was apparently a few nights in Frankie’s House with Page, Sean Flynn and others that “turned” Daniel Ellsberg from being a pro-war RAND corporation analyst to a whistleblower releasing the Pentagon Papers, printed in the Washington Post after the New York Times pulled it at the last moment. The ensuing scandal changed perceptions in America about the war and helped turn the tide against the war. The original Pentagon Papers were called “Papers on a war”. Ellsberg gave Page a copy inscribed with the words: “To Tim who may well have changed the course of the war”.

Page and a group of freelancers, such as his best friend Sean Flynn (son of Errol Flynn) and Martin Stuart Fox, had the freedom to ride choppers and report from across the region in what is sometimes considered the first television war, but also the last war that correspondents could cover freely before US censorship and “embeds” changed the nature of modern war reporting.

Although Page gained much notoriety for his exploits in Vietnam, he also spent 1968 and subsequent years in the US documenting the counter-culture and hippie era, from Woodstock to Watergate. He spent a night in jail with Jim Morrison after The Doors were arrested for obscenity at a concert in Philadelphia, and Page had tried to stop police beating a young concert-goer.

He worked with Hunter S Thompson on several Rolling Stone stories in the US and became the celebrated “Gonzo” photographer as much as HST became the figurehead of Gonzo. There were half a dozen original Gonzo members including the artist and illustrator Ralph Steadman and chronicler of San Francisco’s hippie scene Roger Steffans (The Family Acid).

Needless to say, Page imbibed his share of LSD and enjoyed a long affinity with a variety of altered states. His partner Marriane Harris has likened him to “the Forrest Gump of LSD” because he seems to have turned up at pivotal moments in history of the 1960s and 70s.

His international renown as a psychonaut in this area may explain why when he moved to Australia in 2002 to be with long-time partner Marriane, one of his first invitations was to be a judge at Nimbin’s “Cannabis Cup” competition.

Beyond the rock’n’roll, Page was a committed peace activist and patron of numerous organisations from de-mining organisation MAG (Mine Action Group) to Australian war veterans support group Soldier On.

Much of his work is collected by the Australian War Memorial, among other institutions.

He won the prestigious Robert Capa Award, along with Horst Faas for their book Requiem, which showed photographs from all sides of the Vietnam War.

In 2007, he co-established the Australian war photographers collective with Ben Bohane, the writer of this obituary.

He spent much of his life searching for his best friend Sean Flynn, son of Errol Flynn, who was captured by the Khmer Rouge in 1970 and never seen again, something which haunted him to the end of his life.

He leaves behind son Kit and an extensive body of work documenting war and peace from the 1950s to the present day.

His books include NAM, The Mindful Moment, Page After Page, Derailed in Uncle Ho’s Victory Garden and the forthcoming Nam contacts.

Why is Harvey Weinstein in jail? – The Sun | The Sun