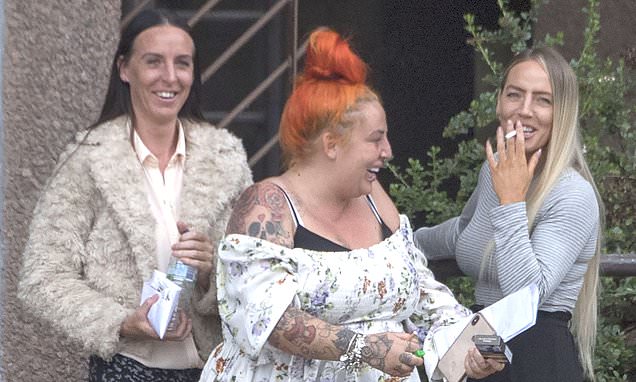 Sisters aged 29, 32 and 33 who launched an homophobic attack on a neighbour while one swung a hammer at him in a dispute over a dog laugh as they are allowed to walk free from court because they are single mothers

Three sisters laughed as they were spared jail after admitting swinging a hammer in a man’s face in a homophobic tirade.

Single mothers Leanne, 32, Louise, 29, and Samantha Whelan, 33, yelled vile abuse at Peter Taylor after he tried to stop them confronting two of his family friends.

Pregnant Leanne, swung the weapon in his face before her sisters called him a ‘queer’ and a ‘f****’.

The women, of the Wirall, admitted engaging in threatening, but were allowed to walk free from Liverpool Crown Court for fear of what prison would mean for their children.

The court heard children were playing in the street in Birkenhead on August 11 last year when the row took place.

The hearing was told the paternal grandmother of Samantha Whelan’s children, Deborah McKenna, and her son Thomas Carson had reported her to social services.

The women had travelled to Mr Carson’s house and became involved in a row over a family dog with Mrs McKenna and Mr Carson’s girlfriend Katie Cunningham. 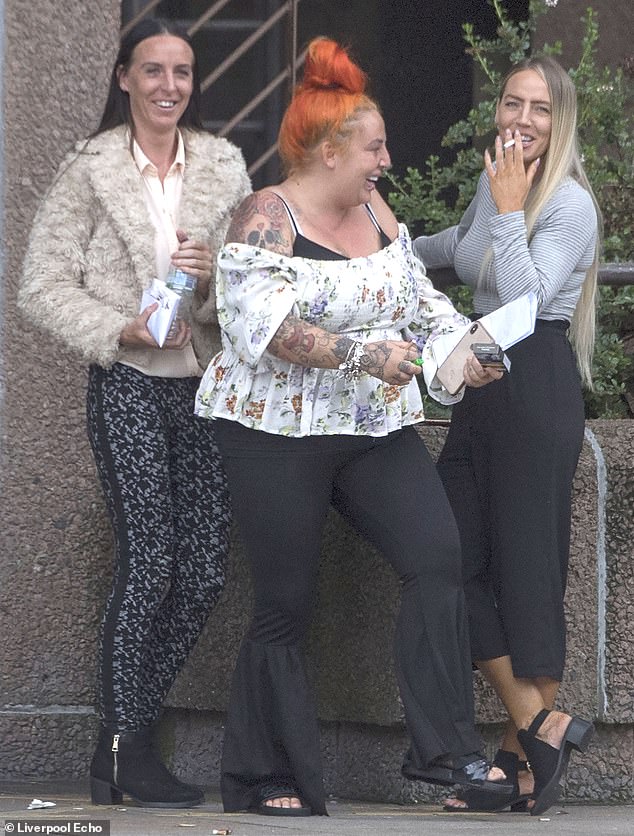 Single mothers Leanne, 32 (left), Louise, 29 (centre), and Samantha Whelan (right), 33, yelled vile abuse at Peter Taylor after he tried to stop them confronting two of his family friends. They are pictured laughing outside Liverpool Crown Court

Peter Taylor is a friend of the McKenna family and had to intervene to stop the argument escalating, prosecutors claimed.

Prosecutors accepted it was a ‘chance encounter’, but the women were seen getting out of a silver Mercedes and shouting ‘come on let’s go’ before Leanne Whelan produced the hammer.

Ms Cunningham fled inside the house but Mr Taylor, who was in the back garden and heard shouting, came out to investigate.

Prosecuting, Paul Becker said the sisters shouted to Ms Cunningham and Ms McKenna to come out, but Mr Taylor told them to calm down.

He said: ‘Samantha Whelan was abusive and said ‘f*** off, we don’t want you.’

He said: ‘Leanne Whelan was seen to be bouncing towards Mr Taylor, threatening and generally acting aggressively. Mr Taylor was shocked and scared.’

Mr Becker said the victim backed off and the sisters walked away but ‘were all shouting homophobic comments about Mr Taylor’.

He said they also made threats to Ms Cunningham, screaming ‘you’re getting this over your head’. 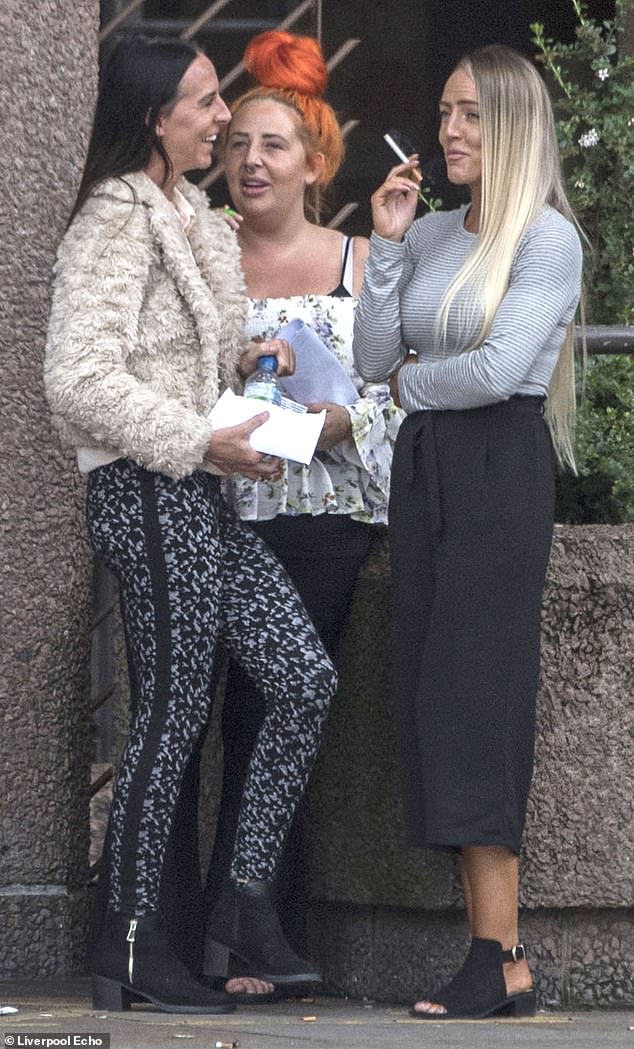 The sisters, of the Wirral, are pictured laughing and smoking outside court this week

Mr Taylor said the incident left him feeling depressed and anxious, ‘looking over his shoulder all the time’ and struggling to sleep at night.

The Whelan sisters claimed the victims were lying and told the court they had alibis, before admitting threatening behaviour ahead of a potential trial.

Leanne, of Bidston, who has five previous convictions for 10 offences, also admitted possessing an offensive weapon.

Andrew McInnes, defending Leanne, said an allegation was made that Ms Cunningham assaulted one of the sisters the previous day.

He said remorseful and embarrassed Leanne was a ‘good mother’ to her children, aged seven months, three and 13.

Mr McInnes said both Leanne and her two eldest children had difficulties, but she had since avoided the victims and planned to leave Birkenhead.

Louise, of Leasowe, has 12 previous convictions for 19 offences, including racially aggravated harassment against a supermarket security guard.

Anna Duke, defending Louise, said her client had two daughters, aged seven and nine, who suffered from ADHD and dyspraxia.

She said a medical report found Louise could be ‘very impulsive’ and lacked thinking skills, but she had signed up for counselling.

Samantha, of Oxton, has three previous convictions for assaulting a police officer, battery and shoplifting. 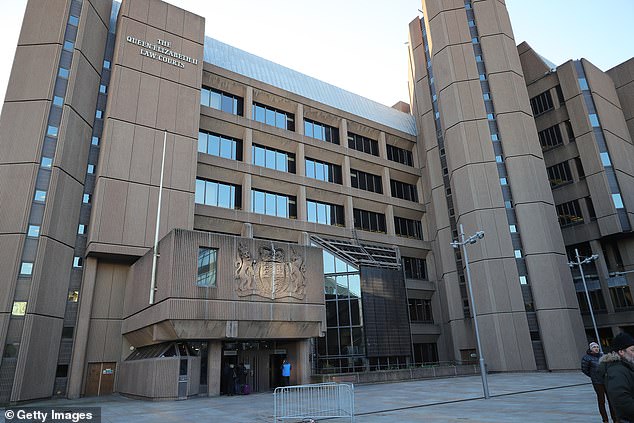 The women, of the Wirall, admitted engaging in threatening, but were allowed to walk free from Liverpool Crown Court for fear of what prison would mean for their children

Bernice Campbell, defending Samantha, said she had a daughter, 14, and son, aged four, who was awaiting an assessment for autism.

She said: ‘Samantha Whelan has been a victim herself, calling the police after she got beat up in front of her four-year-old child.’

Judge Gary Woodhall said Mr Taylor was subjected to ‘homophobic abuse’ and the sisters’ emotions ‘got out of control’.

He said: ‘It appears the background to this offence was either a falling out over a dog or allegations of sexual impropriety and the like.

‘Whatever it was, it led to a dispute between extended family members and tensions increasing up to the day of this offence.

‘Clearly issues were ongoing for some time. Various complaints were made to social services including about the welfare of children.

‘All parties involved – both sides – were warned about their behaviour by a housing association. Various allegations made to police were not prosecuted.

Judge Woodhall said there was a realistic prospect of rehabilitation and jail would cause ‘significant harm’ to their children.

He handed Leanne nine months in jail, and Louise and Samantha nine weeks in jail, all suspended for 15 months.

The judge gave them each three-month home curfews, from 8pm to 6am daily, plus 20-day Rehabilitation Activity Requirements.

Judge Woodhall added: ‘It’s hanging over you now – this dispute has got to come to an end.’