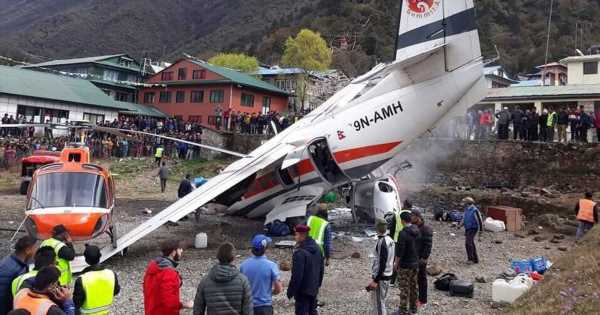 Three people have been killed when a plane hit a helicopter at an airport dubbed the world's 'most dangerous'.

The small plane's pilot and two airport security guards were killed in the tragic incident in Tenzing-Hilllary Airport in Lukla, Nepal, the Himalayan Times reports .

The Twin Otter Summit Air plane hit the stationary Manang Air chopper during the former's takeoff at around 9am this morning, local time.

The aircraft, operated by a private airline, had three crew on board but no passengers.

Dramatic pictures from the scene show the plane crashed on top of the helicopter, with debris scattered everywhere.

A number of other people were injured in the crash, and were taken to the capital Kathmandu for treatment.

According to local police the collision happened when the plane went the wrong direction on takeoff.

The Civil Aviation Authority of Nepal added that the two vehicles were completely destroyed, with a second helicopter also suffering damage.

Lukla is a small mountain town around 80 miles from Kathmandu and a jumping off point for trekkers travelling to Everest Base Camp.

Tenzing-Hillary was dubbed the world's most dangerous airport by the History Channel in 2010 due to the challenging and risky conditions.

One end of the runaway leads to a cliff with a 2,000ft foot drop and weather conditions are unpredictable.

The runaway itself is on a slope and only small planes are capable of landing there.

The airport has been shut while emergency services deal with today's tragic incident.

"Two people died on the spot and the third one died while undergoing treatment in a hospital in Kathmandu," airport official Pratap Babu Tiwari told Reuters.

Air crashes are common in mostly mountainous Nepal, home to eight of the world's 14 highest mountain peaks, including Mount Everest.

In February a helicopter carrying seven people including the country's tourism minister crashed in bad weather in eastern Nepal, killing seven all on board.

The Lukla airport was built by New Zealand mountaineer Sir Edmund Hillary – who together with Sherpa Tenzing Norgay became the first to reach the 29,000ft Everest peak in 1953 – as a gift to the people of the remote Solukhumbu region where it is located.

In 2008, another Twin Otter plane carrying 16 passengers and three crew crashed shortly before it was due to land at Lukla.