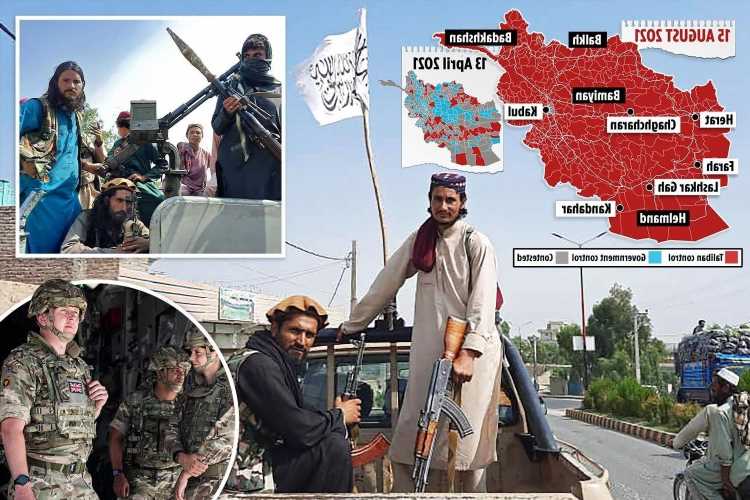 THOUSANDS of Brits were being airlifted out of Kabul last night as the Taliban stormed into the Afghan capital.

The militants’ lightning offensive surprised the UK and US, which sped up escape plans. 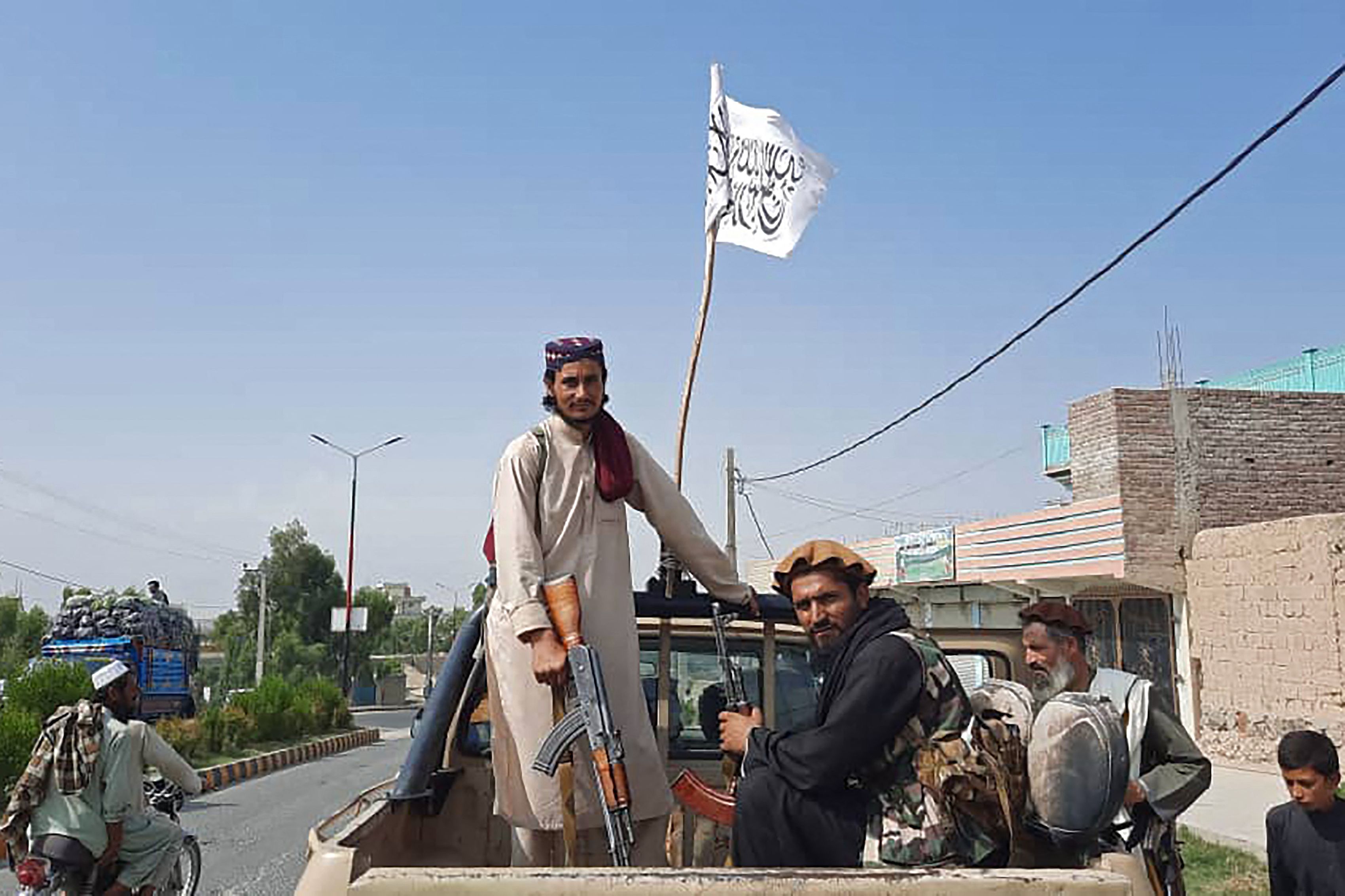 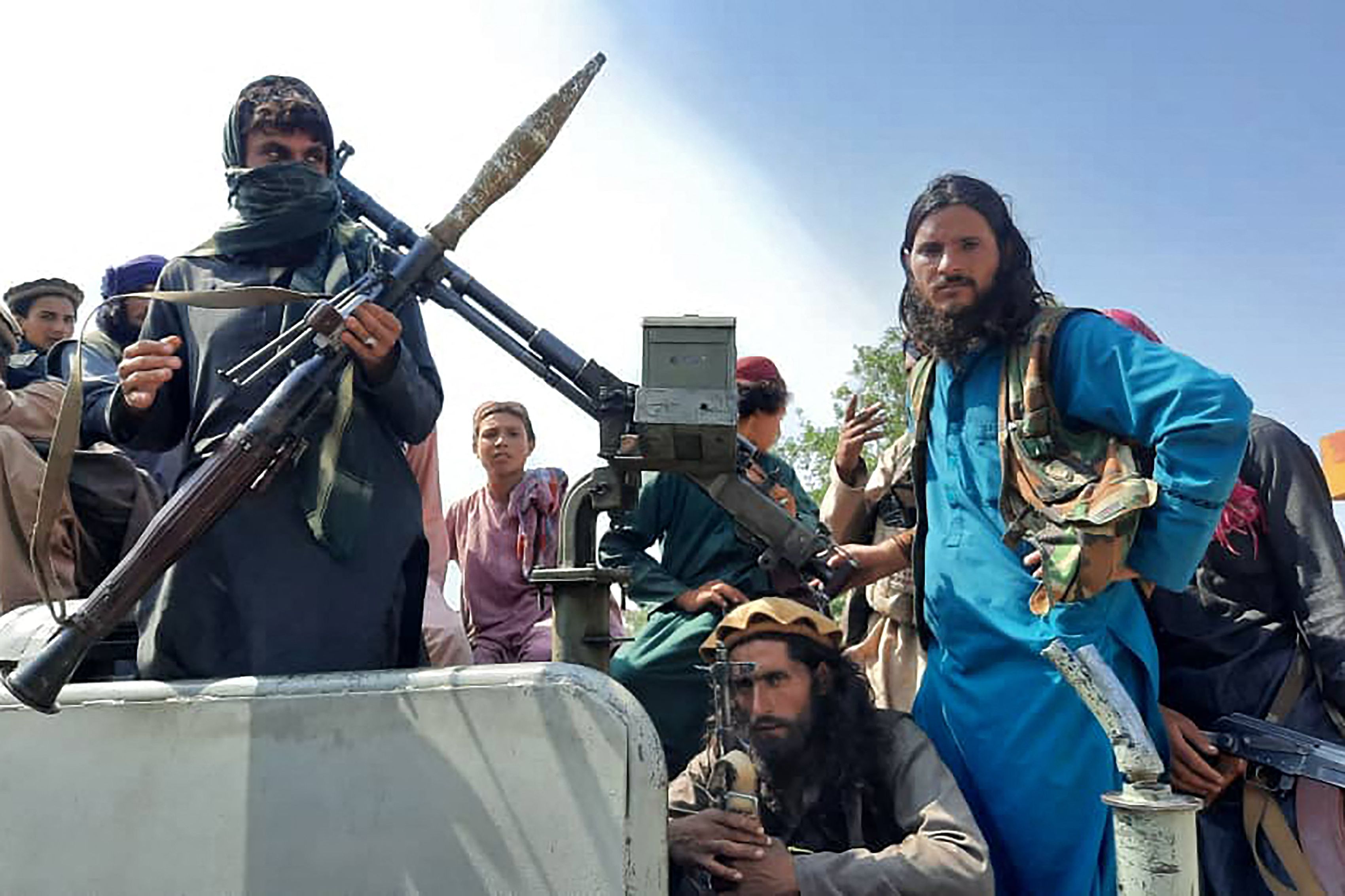 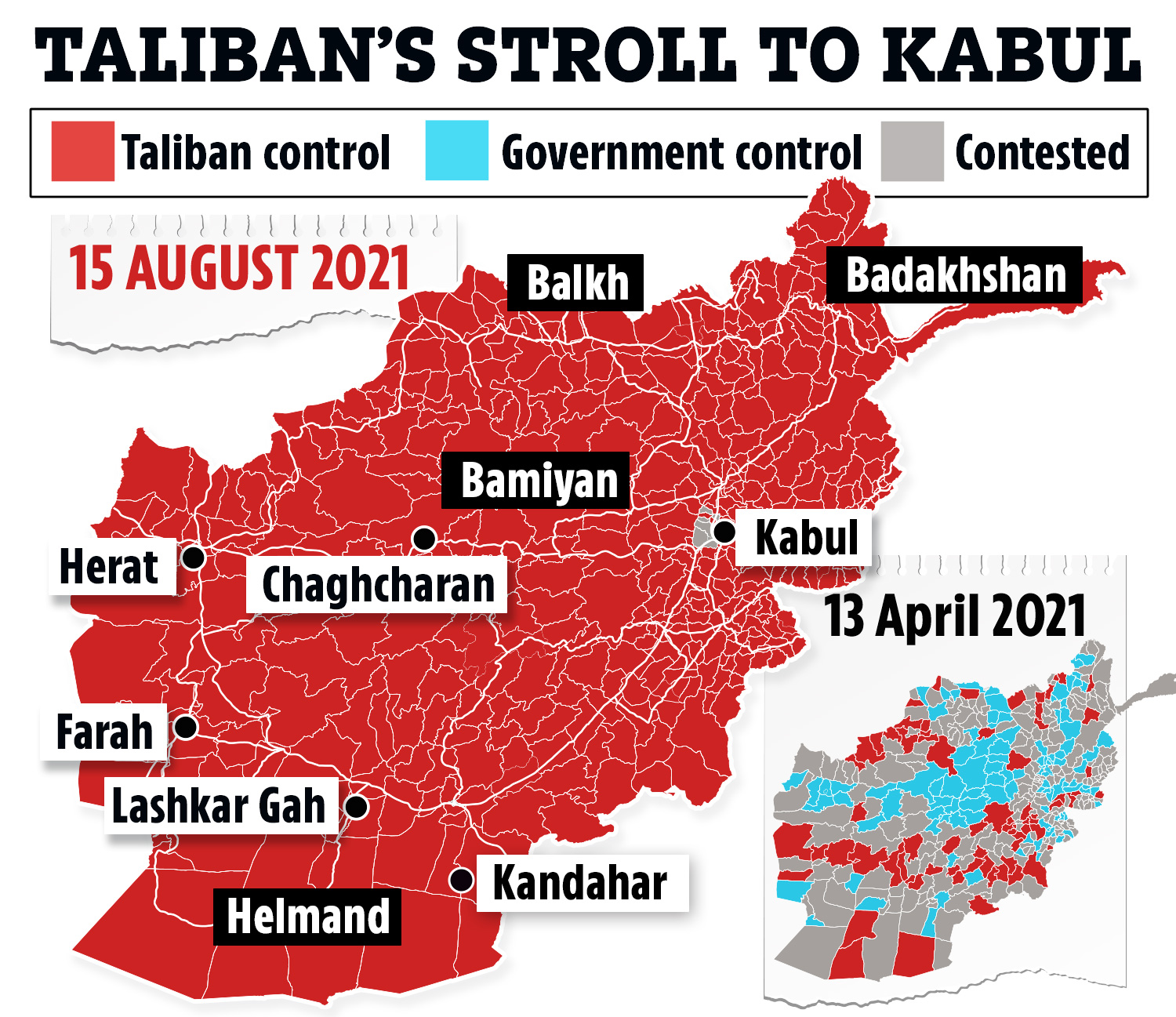 Fighters yesterday took over the presidential palace ahead of what they claim will be a “peaceful transfer of power”.

Meanwhile, Afghan president Ashraf Ghani fled his office and is believed to have taken asylum in Tajikistan.

More than 2,000 Brits were still trapped in Afghanistan last night. A further 2,000 Afghan translators and dependants are also due to join the airlift to safety.

Terrified Brits last night pleaded: Get us out before it’s too late.

Mum Kamila Sidiqi left her family in the UK to return for a funeral and fears being targeted as an outspoken women’s rights activist.

She said: “Every minute I think of the Taliban coming, and if they will come directly to my home.”

Kamila, whose husband Miran, 44, and kids Mir, 12, and Balika, ten, are in Greenwich, South East London, dashed to the British Embassy and found it deserted.

A second Brit, dad-of-two Omed, 42, who did not want to be identified further, was hiding from the Islamist militants in his home.

He fears his British citizenship and previous work on US army bases will make him and his family targets. But his wife cannot get a visa to leave.

As other Brits began to flee, Omed told The Sun: “If I fly back to UK, how can I leave my wife all alone to die?

“As soon as they come to Kabul — obviously people know each other: neighbours, businesses and everything — they would come and if they don’t find me obviously my wife would be there.

“I cannot leave her – whatever happens.”

Evacuations centred on an “air bridge” at Kabul Airport shielded by 5,000 US soldiers who were rushed in by President Joe Biden, plus a 600-strong UK force.

British ambassador Sir Laurie Bristow, who is being guarded by special forces, is expected to leave today while his US counterpart has already flown out.

However, the insurgents freed 5,000 prisoners near the airport to heighten chaos in the area.

Every minute I think of the Taliban coming, and if they will come directly to my home.

Nato grounded all commercial flights out as more than 1,000 passengers tried to board just one.

British Airways announced it was diverting flights away from Afghan air space. At the Pakistan border, thousands of Afghan nationals massed to escape the brutal regime.

MPs are being recalled from their summer holidays after Boris Johnson called a Cobra meeting to discuss the crisis.

He later criticised Mr Biden for pulling out troops. One MP called it our “biggest single foreign policy disaster since Suez”.

General David Petraeus, ex- Commander of US and International Forces in Afghanistan, said the withdrawal was “catastrophic” and urged Mr Biden to “own” it.

He added: “This is an enormous national security setback and it is on the verge of getting much worse unless we decide to take really significant action.”

A British defence source said: "The security of the airport will be key to this airlift.

“The feeling is it is not under threat currently. Whether that will change we don’t know.”

News of the Taliban’s imminent arrival spread across Kabul, hours after the city of Jalalabad was surrendered early yesterday.

In Kandahar, the second largest city, soldiers who had fought with Afghan government forces were reported to have been taken from their homes and executed on their doorsteps.

Residents in Kabul abandoned cars and ran to the airport to try to board commercial flights.

Banks were forced to close after thousands of people tried to withdraw their life savings. Chinook helicopters were seen ferrying staff out of the US embassy.

Pictures of uncovered women in shops — including demure bridalwear posters — were being painted over by traders fearing summary imprisonment or execution.

Taliban spokesman Suhail Shaheen said the insurgents were “awaiting a peaceful transfer of Kabul city” as a negotiating team was sent to the presidential palace.

Taliban leader Mullah Baradar, who is based in Qatar, is heading to Afghanistan where he is expected to head the new interim government.

The terror group said: “We don't want a single innocent Afghan civilian to be injured or killed as we take charge of Kabul”, but added: “We have not declared a ceasefire.”

US President Joe Biden detonated the crisis by ordering all forces to leave by September 11.

Boris Johnson had no choice but to follow suit.

A total of 454 British troops were killed in the Afghan campaign.

Bomb disposal expert Jack Cummings, 32, of 101 Engineer Regiment lost his legs and spent a month in a coma after an IED blast in 2010.

He tweeted yesterday: “Did I lose my legs for nothing, looks like it. Did my mates die in vain. Yep.

“Many emotions going through my head, anger, betrayal, sadness to name a few.” 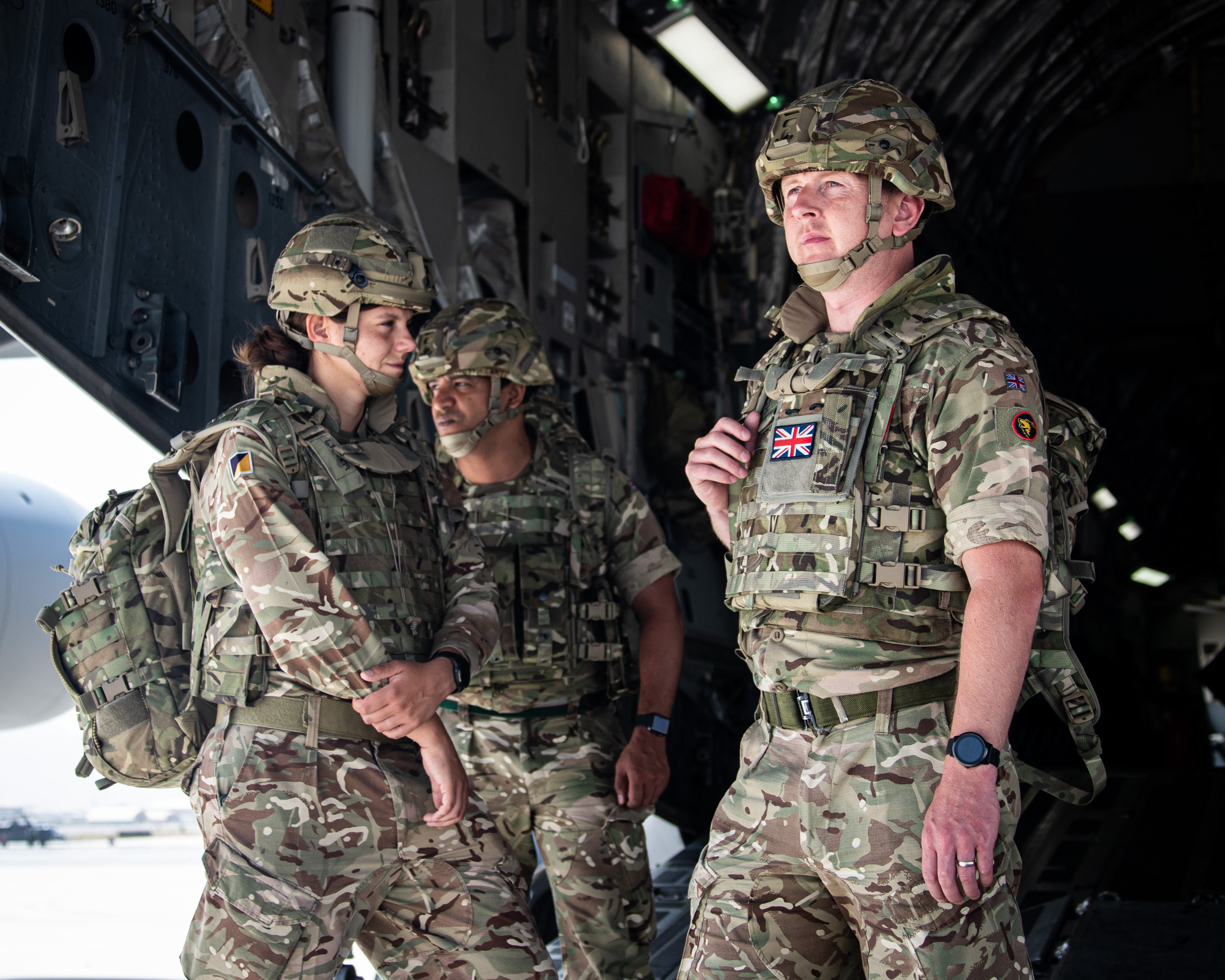 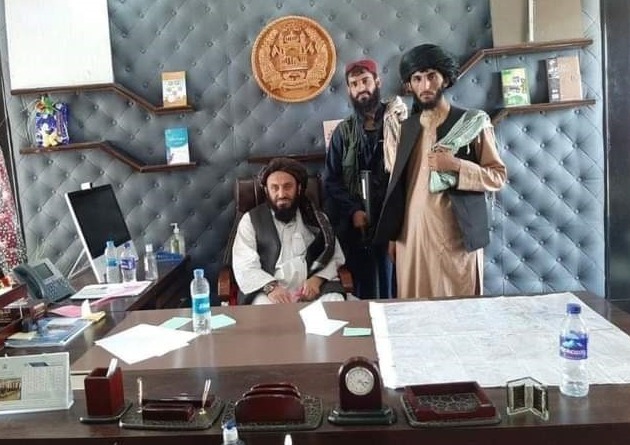 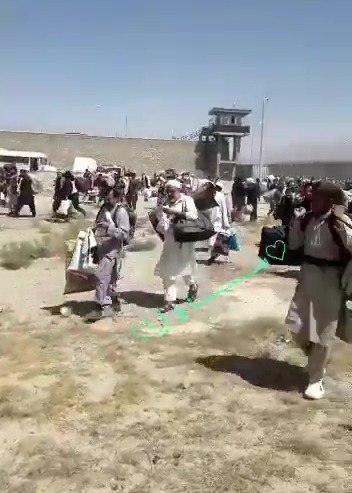 THERE were fears for a British student stranded in Kabul last night.

Miles Routledge, 22, travelled to Afghanistan on a whim after Googling the most dangerous country on earth.

But last night he wrote: “I was under the impression the country wouldn’t fall for a month, so I thought it was fine.

The Loughborough University physics student added: “I’m very religious so I believe I will be looked after.”

How investors, and everybody, should think about climate change