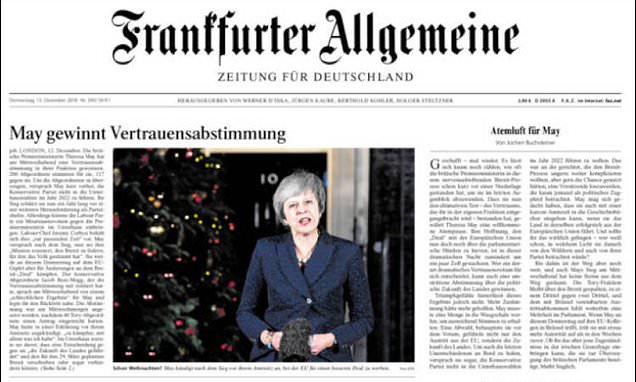 ‘They’re steering the country onto an iceberg’: EU press mystified

‘They’re steering the country onto an iceberg of reality’: EU press reveals how Europe was left mystified by the attempted coup by Tory rebels

European newspapers revealed how the continent has been left mystified by the political chaos in Westminster today.

Germany’s Bild newspaper carried a report suggesting Breixiteers – the ‘would-be captains’ of the British state – appeared determined to drive the UK ‘onto an iceberg of reality’.

It said yesterday’s dramatic bid to oust the Theresa May was little more than ‘political spectacle’ because the PM’s victory was ‘predictable’ from the outset.

In Spain, the El Espanol paper picked up on Ruth Davidson’s claim Mrs May has ‘balls of steel’ to praise the PM for hanging on. 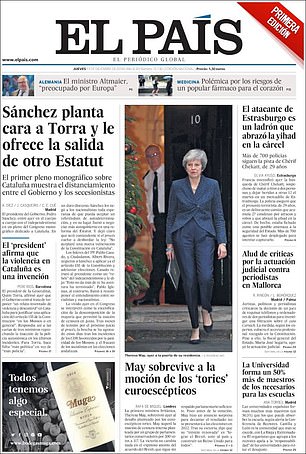 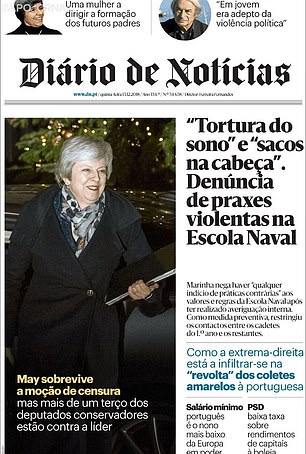 Theresa May’s escape from a Brexiteer coup featured on front pages across the EU today, including on papers in France (left) and Portugal (right) 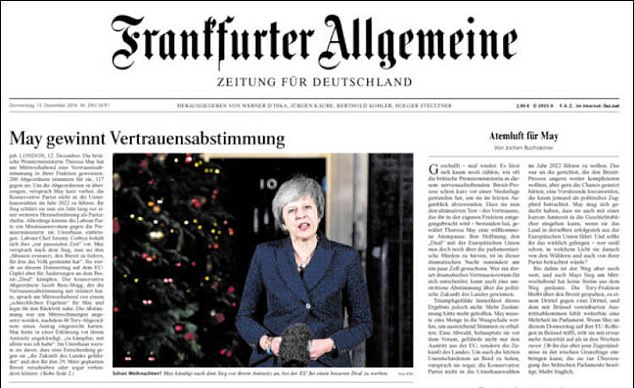 Columnist Alain Franchon used Le Monde to accuse the Brexiteer rebels of acting out of ‘existential boredom’ – deriding them as ‘rich and over educated’.

He said Brexit voters did not even live on the ‘same planet’ as their political champions.

It warned the 117 Tory MPs voting against her was a ‘disastrous’ result for hopes of an orderly Brexit, underlining the threat to the negotiated divorce deal.

Similarly in Portugal, Expresso warned the result was a ‘bitter, sweet symphony’ for the Prime Minister.

It warned she needed a ‘miracle’ to pass her deal – or at the very least a ‘dose of good faith mixed with lack of patience for more negotiations on the part of European leaders’.

In Poland, the Jyllands-Posten was more positive – praising Mrs May for avoiding an ‘immediate disaster’.

The UK civil war continued today as Mrs May flew out of London for her second visit to Brussels this week.

As the smoke cleared after the extraordinary coup bid, Dominic Raab and Iain Duncan Smith confirmed they were among 117 MPs who voted against the PM. 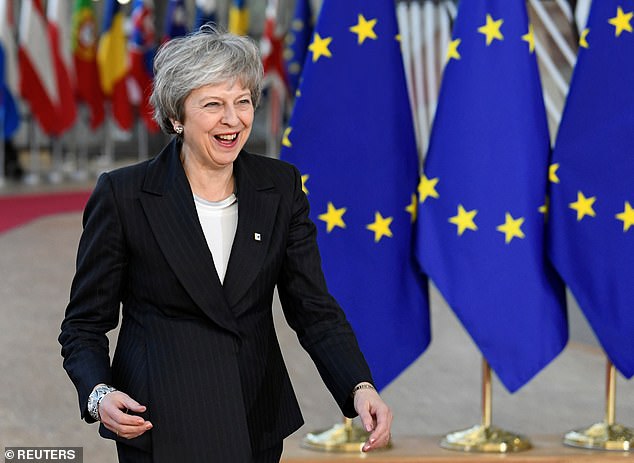 Ex-Brexit Secretary Mr Raab said he feared Mrs May was incapable of securing an acceptable deal from the EU, and her clinging on made a Jeremy Corbyn government more likely.

Mr Duncan Smith said the revolt by more than a third of the Parliamentary party, which used his office as a base, had ‘sent a message’ that Mrs May needs to change tack.

Boris Johnson is also thought to have gone against the premier, although he refused to confirm which way he voted, and David Davis had hinted that he would rebel.

But the pro-EU Conservative wing hit back furiously demanding that the hardliners accept they had lost the ballot – or leave the party altogether.

The vicious infighting came as Mrs May confirmed she will not try to lead the party into the next general election.

What time is the Queen's Speech on Christmas Day and what is Her Royal Highness' theme this year?