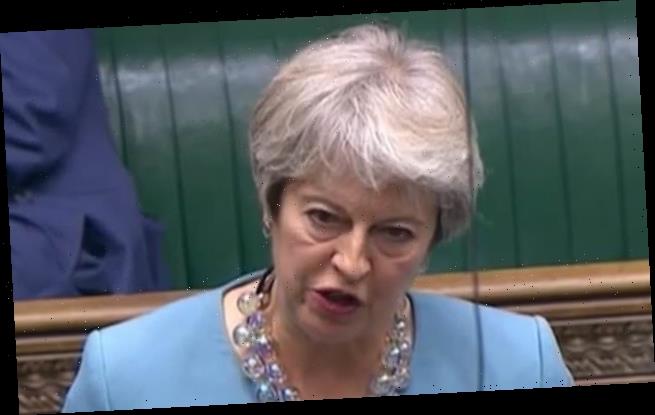 Theresa May yesterday led a Tory backlash over the failure to introduce virus tests at airports.

The former prime minister said Britain is ‘lagging behind’ the rest of the world and accused No10 of ‘dragging its feet’ on plans to reopen the skies and save the economy.

Her intervention came as British Airways announced plans to cut 60 per cent of flights until Christmas, blaming the disastrous 14-day quarantine rules. 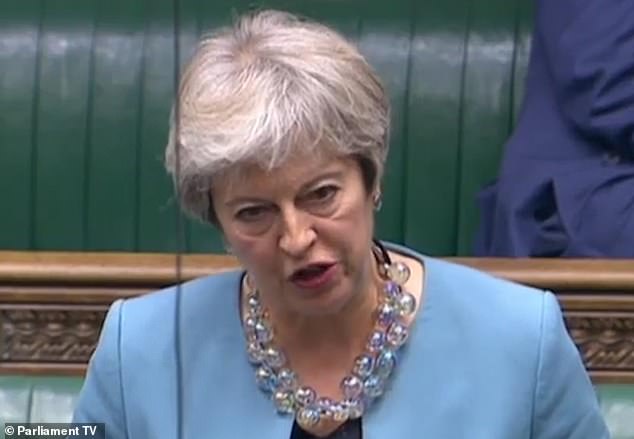 Theresa May yesterday led a Tory backlash over the failure to introduce virus tests at airports. She is pictured above speaking in Parliament

And in another crippling blow, the International Air Transport Association warned Britain is set to lose its ‘coveted’ position as the third-biggest global aviation market unless immediate action is taken on testing.

IATA chief executive Alexandre de Juniac said: ‘820,000 jobs will be vaporised by quarantine and they may never come back. The answer is a Covid-19 testing regime that manages the risk to keep people safe from the virus. And it will avoid apocalyptic unemployment that is sure to devastate society and the economy.’

As Tory anger erupted in a Commons debate on aviation, Mrs May told MPs: ‘I’m certain testing has to be the way forward in the foreseeable future, but at the moment airports aren’t even permitted to trial tests on passengers. Far from leading the world, the UK is lagging behind.’ 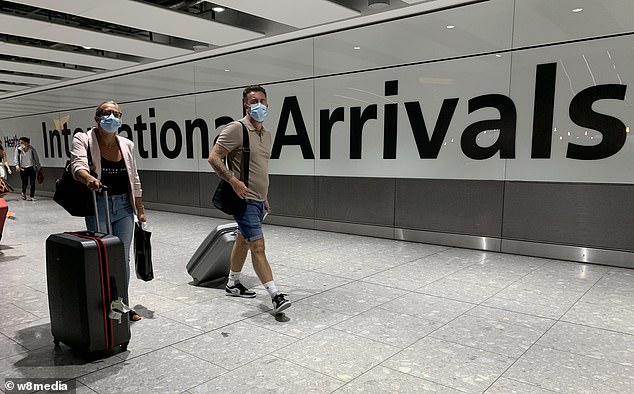 The former prime minister said Britain is ‘lagging behind’ the rest of the world and accused No10 of ‘dragging its feet’ on plans to reopen the skies and save the economy. Passengers are pictured above arriving in Heathrow

‘Stop the UK dragging its feet, let’s lead the world and set the standard to restore world travel and world trade.’

The Daily Mail’s Get Britain Flying Again campaign is calling for Covid-19 testing of passengers to save the economy and save jobs.

It is backed by business chiefs and MPs, who say the 14-day quarantine rule is a major threat to our status as an aviation heavyweight and trading superpower.

Ministers say a review of virus travel rules could see the quarantine time halved to eight days – but not for ‘weeks’. Airline chiefs are calling for urgent action and a shortening of quarantine to five days.

Rules are far tougher than neighbours’

Britain’s quarantine rules are among the strictest and most extensive in the world.

The vast majority of European countries, including France and Germany, have few restrictions on arrivals who test negative.

For example, in France there is no quarantine on arrivals from Europe, the UK and 11 other countries. Arrivals from other countries are exempt from quarantine if they arrive with a negative test 72 hours before landing. Even the US, which has some of the toughest Covid border controls, dropped its self-isolation requirement.

But the UK has 131 countries – as well as several islands – on its ‘red’ list of places from which passengers must self-isolate for 14 days.

Our analysis of quarantine policies in 20 countries illustrates how the UK is lagging behind other countries in getting the economy moving by re-opening the skies.

And it exposes how the UK is quarantining arrivals from 34 of the world’s top 50 nations by GDP, putting our role as a trading superpower at serious risk.

Former prime minister Theresa May yesterday warned that other countries are overtaking the UK in restarting flights to boost their economies.

Paul Charles, boss of travel consultancy the PC Agency, said: ‘The restrictions have been too harsh and now more than ever we need a more progressive approach.’

They stepped up the pressure yesterday as the IATA criticised the Government’s ‘opaque’ decision-making on quarantine.

He told the Commons: ‘It is vitally important for this industry not just that we get short-haul flights moving again, but that we open up transatlantic routes that are so fundamentally important to the industry. And we can only do that through testing.

‘I cannot understand why we are not at the very least trialling testing on a number of routes.’

Paul Maynard, the Tory aviation minister until February, compared the UK’s economy to a dodo – suggesting it too might become extinct.

He told the Commons: ‘We have a chance to test people before they board. We should oblige all UK-registered airlines to do just that.’

The IATA has proposed a four-point plan to save Britain’s aviation industry – a testing regime, a review of quarantine rules, a suspension of Air Passenger Duty and an extending of the furlough scheme for airport and flight staff.

A spokesman said: ‘Many countries around the world have introduced testing regimes to support air travel. It is time the UK brought forward a similar regime.’

A Department for Transport spokesman said: ‘We are taking clear and decisive action to slow the spread of the virus and save lives.

‘We keep the data for all countries and territories under constant review, and if the public health risk of people returning from a particular country without self-isolating becomes too high we will not hesitate to remove countries from the travel corridors exemptions list.’

By Transport Correspondent for the Daily Mail

Tens of thousands of British holidaymakers are facing a race to escape Portugal after the country was returned to the quarantine list.

The move will trigger another day of chaos as they rush to get home before the restrictions kick in at 4am tomorrow.

The cost of flights home soared to £600 within minutes of last night’s announcement, and British Airways laid on an extra service from Faro on the Algarve. 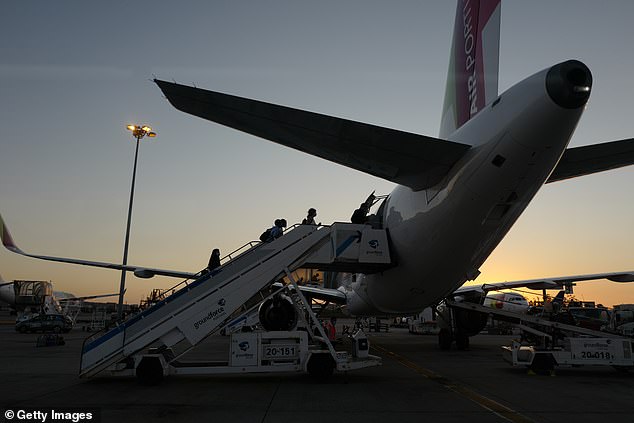 Passengers are seen boarding a flight from Portugal to Britain on September 3rd. Tens of thousands of British holidaymakers are facing a race to escape Portugal after the country was returned to the quarantine list

Meanwhile, Sweden, which did not impose a compulsory lockdown and chose a ‘herd immunity’ approach to tackling coronavirus, was removed from the UK’s quarantine list after its infection rate fell.

Many of the 35,000 Britons currently in Portugal will have no choice but to carry on with their holidays and self-isolate for 14 days on their return. Some may have to take unpaid sick leave and university students could miss the start of term. 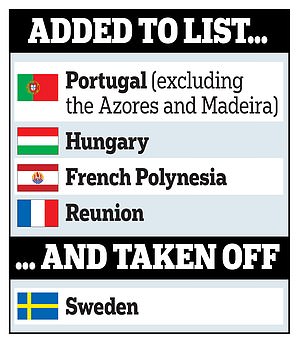 The decision was taken after the number of cases in Portugal over seven days jumped to 28.3 per 100,000 people yesterday, over the Government’s threshold of 20.

The new restrictions do not apply to the Portuguese islands of Madeira and the Azores, where infection rates are lower than on the mainland.

Hungary, French Polynesia and Reunion have also been added to Britain’s ‘red’ list of territories subject to quarantine.

Scotland and Wales had already added Portugal and French Polynesia to their quarantine list, but other changes announced yesterday apply to all four parts of the UK. Industry leaders told of their dismay at the latest decision, which comes three weeks after Portugal was removed from the quarantine list.

Travel consultant Paul Charles said: ‘The weekly review needs to be changed. They need to move the system to a traffic light system so that consumers are clearly-informed about ministers’ intentions and which countries are at risk. It would enable them to book trips with more certainty.’

It came as Home Office figures revealed officials have only managed to fine 34 people for breaching quarantine since the rules were introduced in June – despite the fact that two million people have arrived in the country since then. Public Health England said it had made or sent 149,579 calls or text messages to passengers to check they were self-isolating at home. Some 64,800 people had confirmed they were self-isolating.