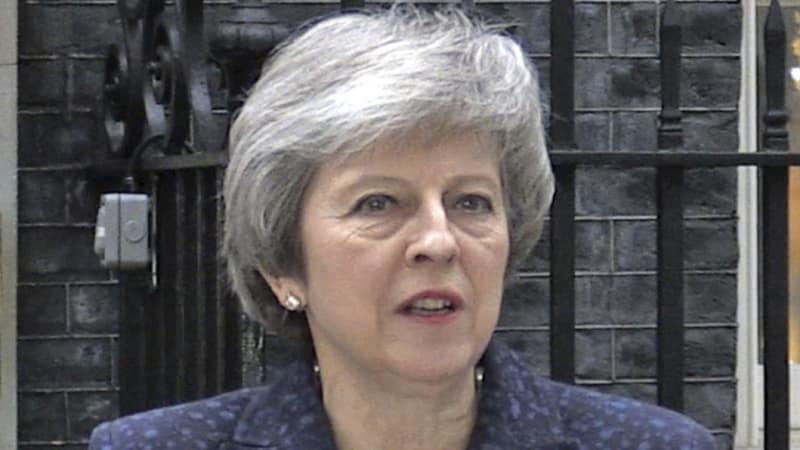 London: British Prime Minister Theresa May faces a challenge to her leadership as anger surrounding her handling of Brexit boils over among her party colleagues.

But May, in a defiant speech on the steps of Number 10, said the challenge risked delaying or even stopping Brexit and warned a Conservative party leadership change would "put our country's future at risk". 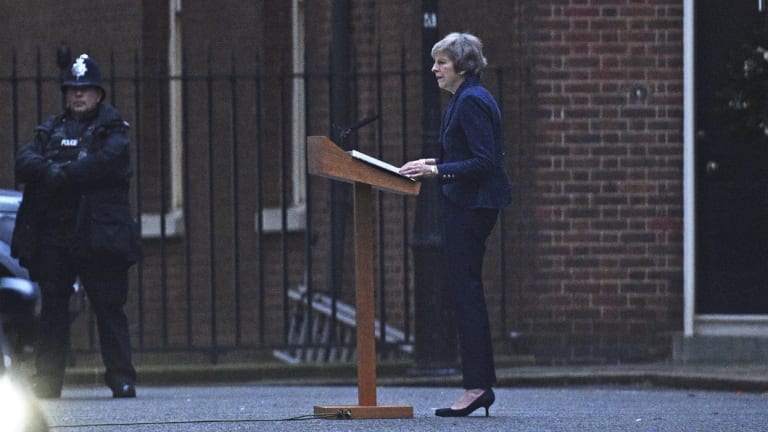 British Prime Minister Theresa May makes a statement in Downing Street on Wednesday confirming there will be a vote of confidence in her leadership of the Conservative Party,Credit:PA

A good Brexit deal was "now within our grasp", she said.

But if there was a new leader, her replacement would not have time to renegotiate the Brexit withdrawal deal that May had reached with the EU. It would mean "delaying or even stopping Brexit", she said.

"Weeks spent tearing ourselves apart will only create more divisions and none of that would be in the national interest," May said. "The British people want us to get on with it … I stand ready to finish the job."

There are just over 100 days to Brexit, which unless it is put off will happen on March 29. The EU has insisted the deal on the table is its best and final offer, and if negotiations reopen then it may reconsider some of its previous concessions.

May said a leadership change would only benefit Labour party chiefs Jeremy Corbyn and John McDonnell. Her replacement would likely face a vote of confidence in the government, brought by the Labour Party who want a general election, claiming the government has lost control of Brexit.

If May loses the confidence vote – held as a secret ballot – then she cannot stand again as leader.

Her colleagues will choose two new candidates, and they will then be put to party members for a vote (though they have the option of just presenting one candidate, who would automatically win). 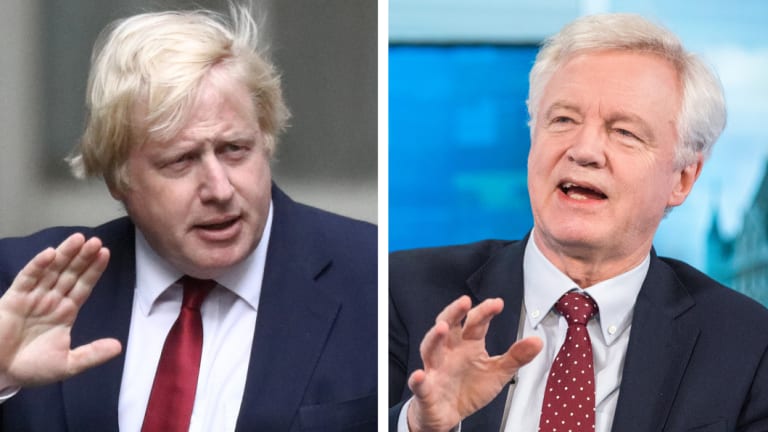 Before the vote, May was due to face Prime Minister’s Question Time in Parliament – possibly her last.

On Monday she called off a vote on the withdrawal deal she had reached with the EU, after it became clear it would have been rejected by the House of Commons.

Instead, she said she would visit European leaders and seek “additional reassurance” on some of the deal’s more contentious elements.

She would not commit to a date the deal would return to Parliament, other than saying it would be before January 21. This further infuriated MPs on all sides of Parliament, who accused the Prime Minister of holding the chamber in contempt by denying it a vote. 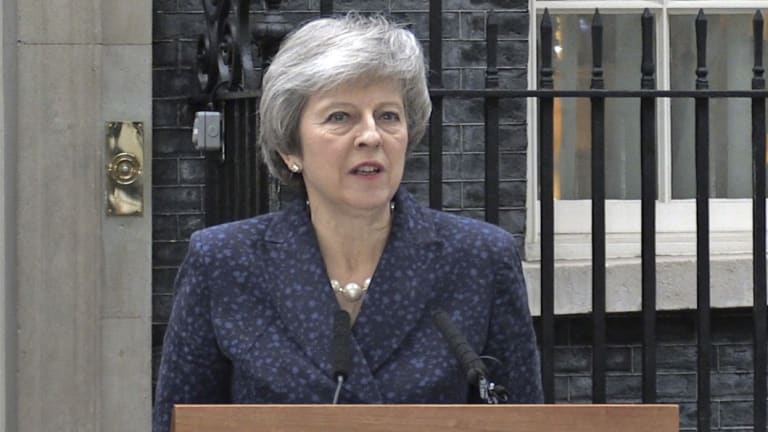 If Theresa May cannot win the support of a majority of her 315 parliamentary colleagues then she will be kicked out as leader – and prime minister.Credit:PA

May will have to spend the day fighting to convince colleagues she is still the best person to lead the country as it exits the European Union.

Last month May concluded the Brexit deal, which would see the UK pay of hundreds of millions of pounds to settle debts, and enter a transition phase in which it follows EU rules it has lost influence over.

The most controversial element was a ‘backstop’ which would come into force after the end of the transition, if the two sides had not yet agreed a future trade and customs deal.

The backstop would see the UK trapped, potentially for years, in a customs union with the EU that would prevent it setting its own trade policy. And Northern Ireland would stay in the EU’s customs union and follow single market rules, legally dividing it from Britain.

May’s deal has been criticised from all sides of politics as containing compromises they cannot accept.

But she told Parliament on Monday “there will be no enduring and successful Brexit without some compromise on both sides of the debate”.

Anticipating a challenge, she said many of the most controversial aspects of this deal – including the backstop – were simply inescapable facts of having a negotiated Brexit. 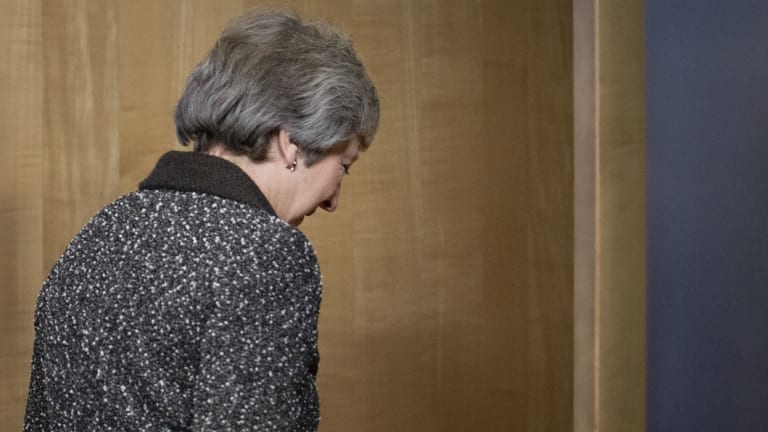 If Theresa May loses the confidence vote, held as a secret ballot, then she cannot stand again as leader.Credit:Bloomberg

“Those members who continue to disagree need to shoulder the responsibility of advocating an alternative solution that can be delivered – and do so without ducking its implications,” she said.

But on Tuesday May failed to secure any of the “reassurance” she had promised from European leaders.

At breakfast in The Hague, Dutch Prime Minister Mark Rutte told her there was no better deal to be had.

At lunch in Berlin, German Chancellor Angela Merkel said it was not possible to reopen negotiations, though there could be some other solution. 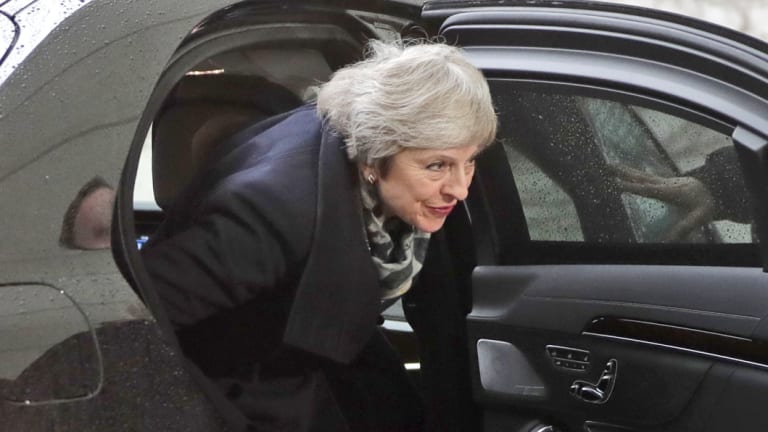 British Prime Minister Theresa May arrives for a meeting on Brexit on Tuesday with German Chancellor Angela Merkel in Berlin.Credit:AP

And at dinner in Brussels, EU Commission President Jean-Claude Juncker said there was “no room whatsoever for renegotiation”, though he said there was room for “further clarifications and further interpretations”.

Meanwhile, a new YouGov poll has found only 5 per cent of respondents thought May had got a good Brexit deal, while 24 per cent thought someone else would have got a better one.

But 48 per cent of respondents agreed that “any other leader would have done just as badly”.

Britain to be hit with SEVEN INCHES of snow, gales and -2C temperatures on Saturday

Krispy Kreme’s ‘Day Of The Dozens’: How To Get A Dozen Donuts For Just $1
World News