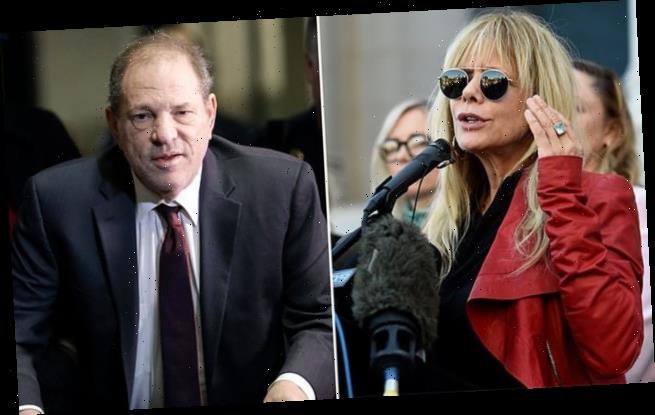 'There are 'a lot more Harvey Weinsteins', Rosanna Arquette reveals

‘There are a lot more Weinsteins’: Actor and Me Too activist Rosanna Arquette warns that the Hollywood producer’s conviction was ‘the tip of the iceberg’ and there are ‘a lot of spiders in that web’ as she launches new podcast

Rosanna Arquette has warned that there are ‘a lot more Harvey Weinsteins’ in an interview to launch her new podcast.

The Bafta-winning actor and activist said that the Hollywood producer’s conviction and 23-year jail sentence in March last year for decades of sexual assault was ‘the tip of the iceberg’ and that ‘there are a lot of spiders in that web’.

The 61-year-old, who rose to fame in the 1980s and is known for her roles in Desperately Seeking Susan and Pulp Fiction, said that the perpetrators would be named ‘in good time’ but that she feared further damage to her career, even after the launch of the Me Too movement.

Many women spoke up about how the powerful producer, known for a string of Oscar-winning hits, allegedly ‘ruined’ the careers of the women who spoke out against him, including Arquette. 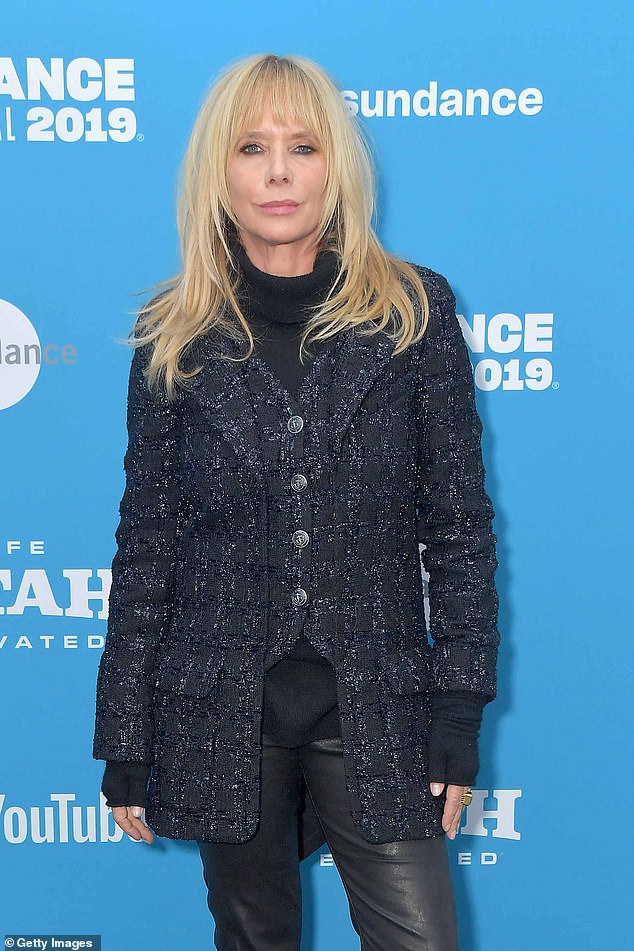 Actor and Me Too activist Rosanna Arquette, pictured at the 2019 Sundance Film Festival in Park City, Utah, has warned in a new interview that there ‘a lot more Harvey Weinsteins’ 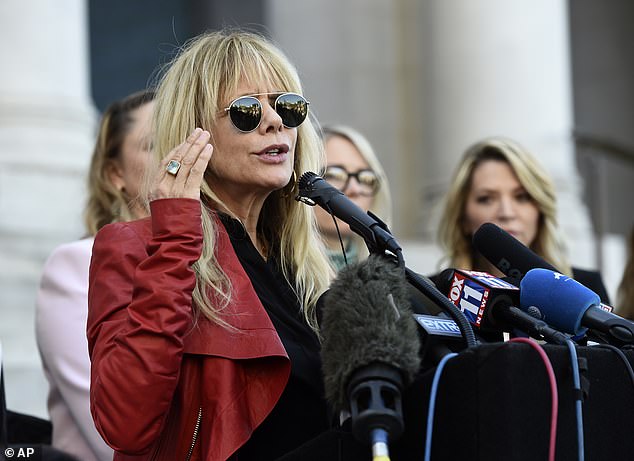 Arquette gave the interview to launch her new podcast, Radical Musings with Rosanna Arquette. She was one of several actors who spoke up about Weinstein’s allegations of sexual assault, including pictured at the ‘silence breakers’ group outside Los Angeles City Hall in February last year following the Hollywood producer’s conviction of sexual assault 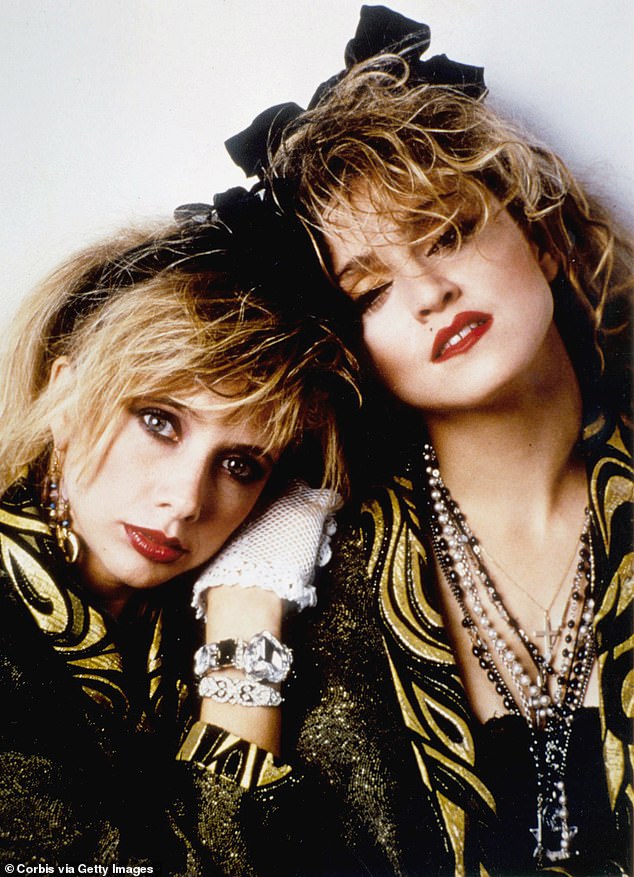 The 61-year-old (pictured left) rose to fame in the 1980s in roles in films like Desperately Seeking Susan, alongside Madonna (pictured right) 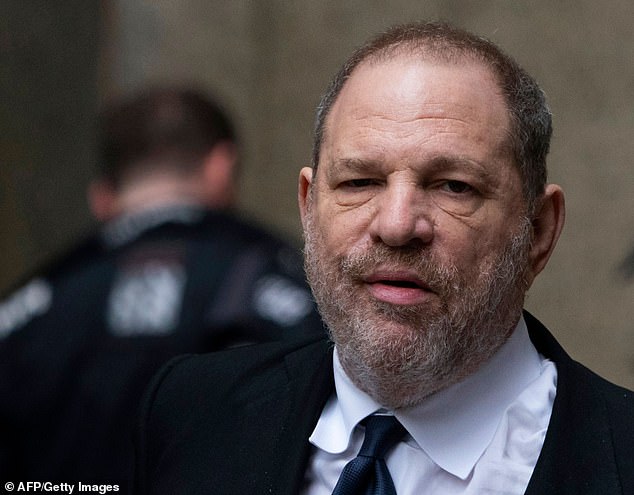 Harvey Weinstein, pictured in 2019 leaving the New York Supreme Court after a pre-trial hearing, was convicted of sexual assault last year and sentenced to 23 years. Many women came forward to claim that he had ‘ruined’ their careers when they spoke up about his behavior, including Rosanna Arquette

In an interview launching her new podcast, Radical Musings With Rosanna Arquette, today she told The Daily Beast: ‘It would just make things worse right now [to name them] but all in good time, my dear. Right now is not the time for it. I do what I do and don’t have any regrets, because what has been exposed is just the tip of the iceberg. Along with Harvey, there are a lot more Harvey Weinsteins, unfortunately. It’s like a spiderweb, and there are of spiders in that web.’

The actor, who is part of an acting family including Oscar-winner Patricia Arquette and David Arquette, added: ‘There are people that feigned horror about him but will still penalize you for being outspoken or telling the truth. There are still people in power that protect him. I just had a situation, and I won’t get into specifics, but it was a TV show that really could have been great, and they wanted me, and someone at the top killed it.’

The podcast launched on Audio Up Media today and will feature guests including New Yorker writer and Me Too investigative journalist Ronan Farrow, veteran actor Jane Fonda, as well as Me Too movement founder Tarana Burke.

Arquette claimed, in several interviews in the last few years, that in the early 1990s Weinstein made sexual advances towards her at The Beverley Hills Hotel and when she rebuffed him said: ‘Rosanna, you’re making a very big mistake’.

She said she was supposed to have dinner with the producer but was invited up to his room, causing her heart to start ‘racing.’

Arquette stood in the doorway of Weinstein’s room and didn’t enter, prompting him to tell her the choice was a ‘very big mistake’ as he named actresses who he claimed went along with his advances to further their careers.

She claimed he later tried to ‘ruin’ her career by spreading rumors that she was ‘a pain in the ass’ to work with, putting directors off from hiring her for roles. 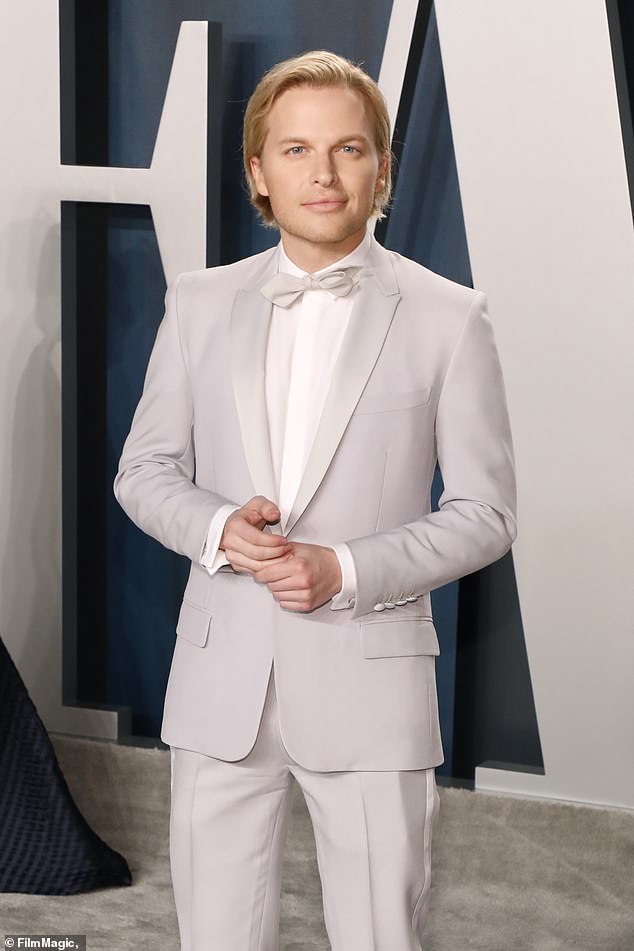 Ronan Farrow, an investigative writer for The New Yorker, helped expose the Weinstein allegations, and will be one of Rosanna Arquette’s first podcast guests.  He is pictured at the 2020 Vanity Fair Oscar Party in Beverley Hills, California. 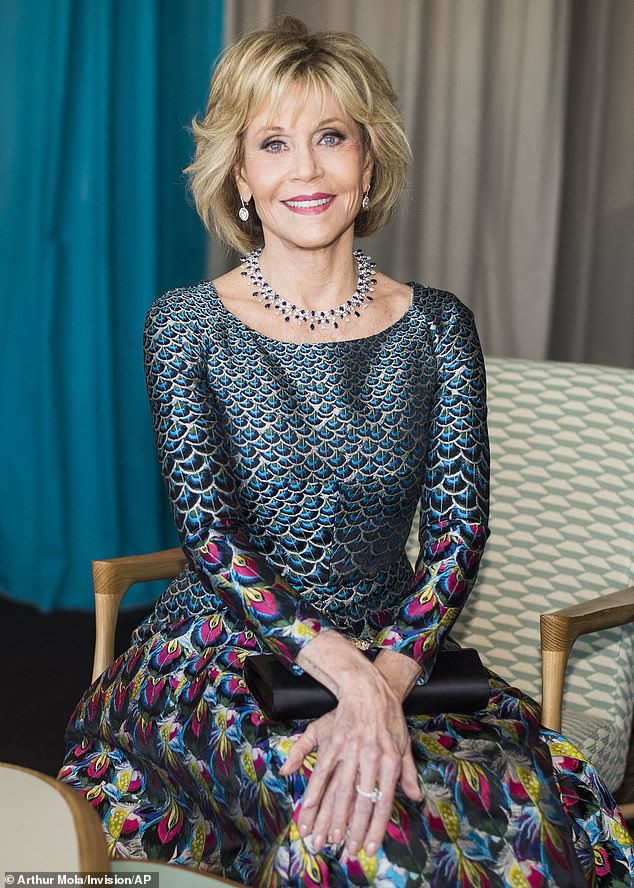 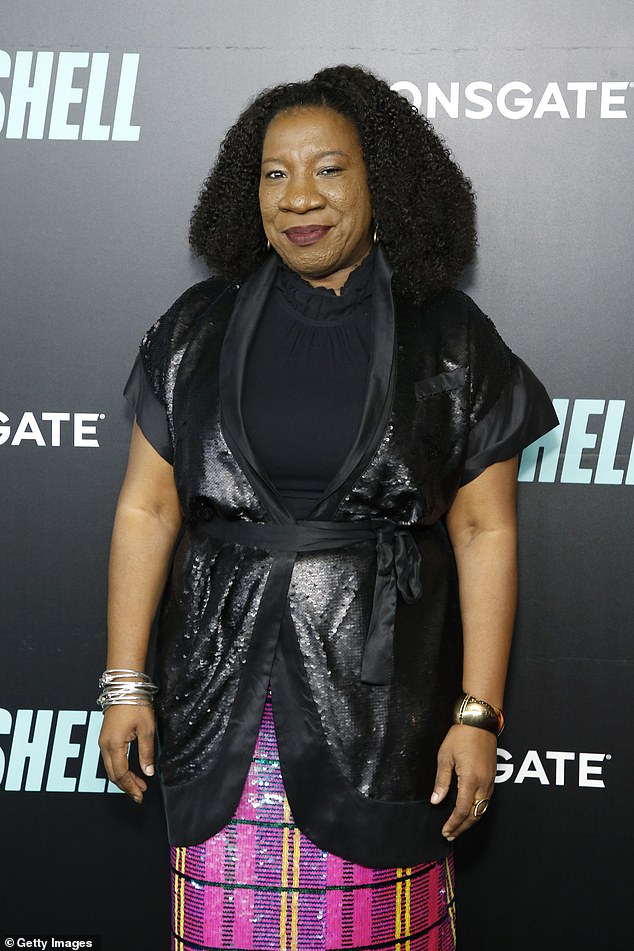 Another podcast guest will be Tarana Burke, the founder of the Me Too movement, who is pictured at Lincoln Center in New York in 2019

Other revelations in the interview include the time in the 1980s that she was sharing an apartment with the late John Heard, who died in 2017, and woke to find that he had a visitor.

She said: ‘I woke up one morning, and Cher was in the kitchen making tea, and she said, ‘Would you like a cup of tea?’ It’s so funny.’

The settlement fund will be divided among more than 50 claimants, with the most serious allegations resulting in payouts of at least $500,000.

Among the accusers, 83 per cent ‘have expressed very loudly that they want closure through acceptance of this plan’, said Judge Mary Walrath in Wilimington, Delaware, who announced her ruling at the conclusion of a remote hearing.

‘They do not seek to have to go through any further litigation in order to receive some recovery, some possible recompense… although it’s clear that money will never give them that,’ she added.

In December Weinstein’s extradition to California, where he faces further charges of sexual assault, was delayed.

Sonic the Hedgehog Series Coming to Netflix in 2022 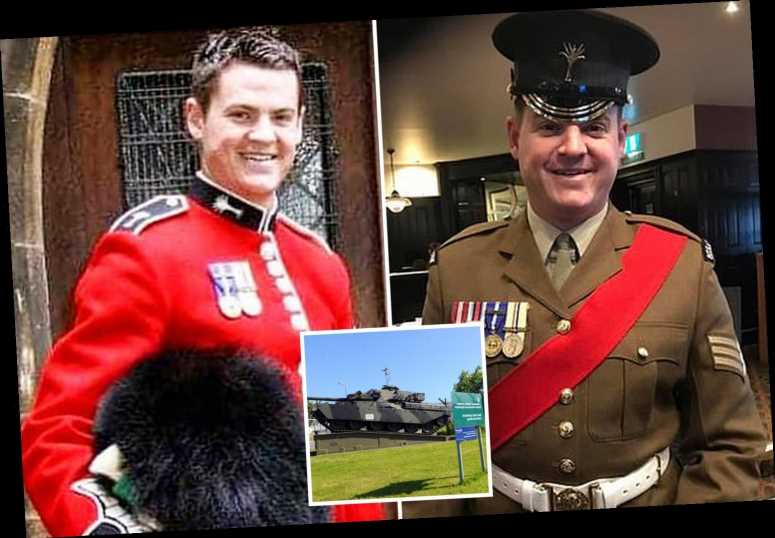 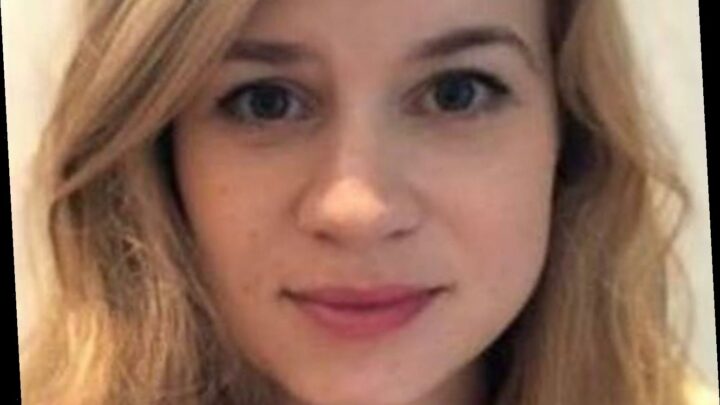 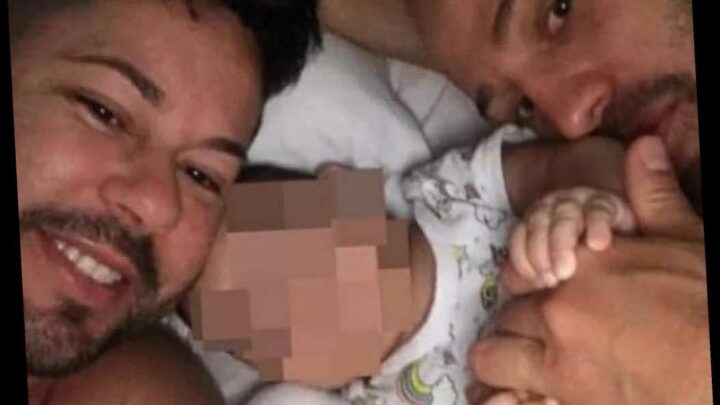